Tim Burton's latest whimsical holiday treacle features Albert Finney and Ewan McGregor in a saga of a tall-tale-spinnin' Southerner who won't shut up. 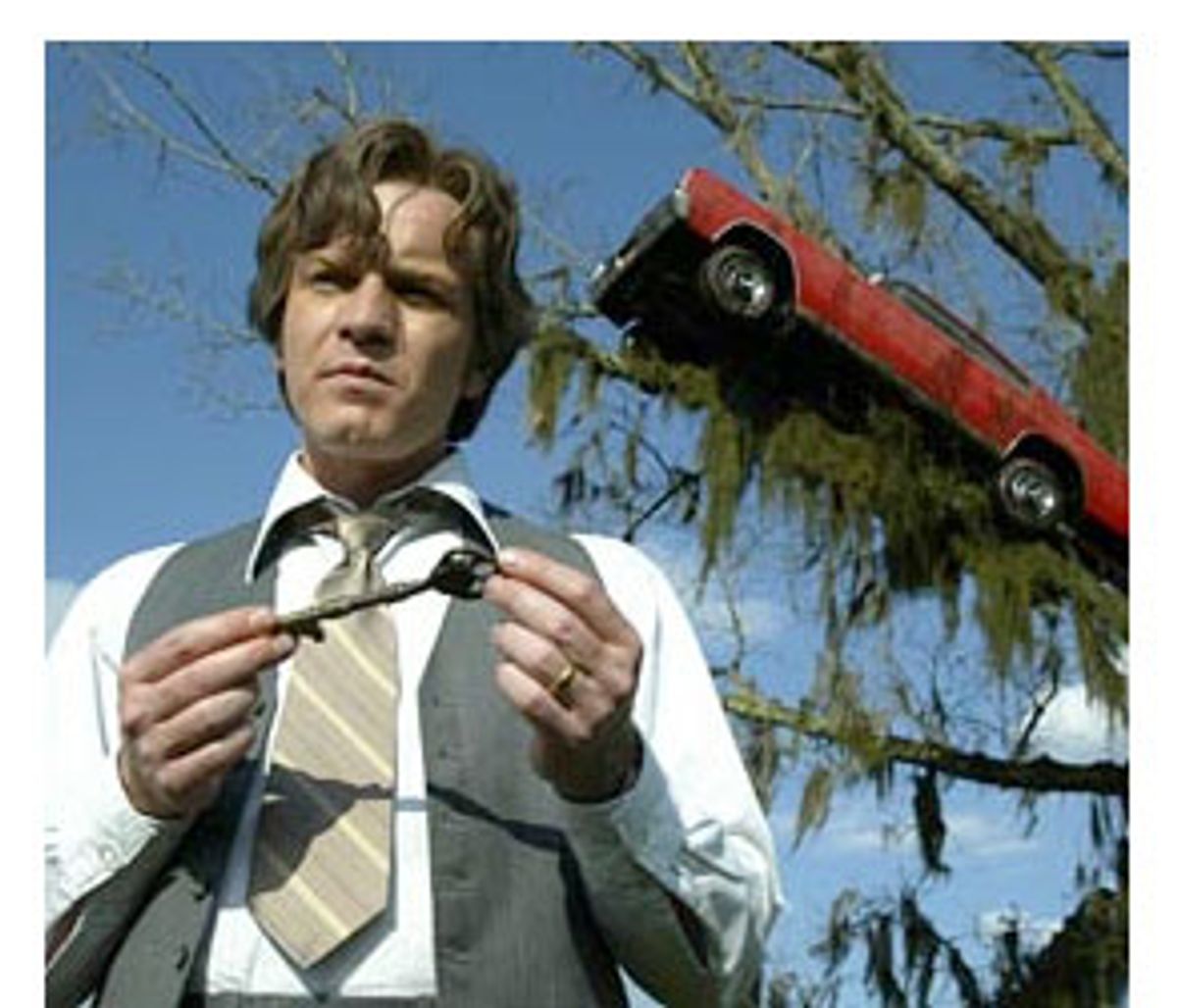 Why are people always gassing on about the power of stories when it's so much more effective just to knuckle down and tell one already? We don't need a shaman to inform us that good stories are powerful. But since the '90s, at least, in both books and movies, there's been a marked trend toward reminding us just how important stories are, instead of just laying them on us, the old-fashioned way.

We get wordy preambles -- often delivered by a wise elder, usually a Southerner -- about how stories tell us who we are and where we've been. In a state of innocent hopefulness, we wait to hear the tale: Who knows? It might actually be good. But more often than not it turns out to be some magic-realism baloney about a giant fish in a stream or some similarly numbing metaphor for the unpredictability of life, or the brevity of life, or the importance of taking chances in life -- choose your own larger meaning and insert it here. Maybe the story would have been OK without the big windup. Then again, maybe it needed the advance advertising campaign because it wasn't such a great story to begin with.

Tim Burton's "Big Fish," adapted by John August from Daniel Wallace's book "Big Fish: A Novel of Mythic Proportions," is a drearily affirming bit of whimsy about how life wouldn't be worth living without tall tales, or even short, fat ones. You'd think that Burton, whose movies can be so invigoratingly nasty ("Beetlejuice") or so hypnotically moody ("Sleepy Hollow"), would be able to pull off a gentle, mainstream crowd-pleaser without making it dull or preachy. But "Big Fish" is both.

Burton is a complicated director, more so than a finished product like "Big Fish" might lead you to believe: While I shy away from the chilly mean-spiritedness of "Mars Attacks!" I also think that Burton hasn't gotten enough credit for the emotional richness (in addition to the more obvious visual kind) of pictures like "Batman" and the charming but also unexpectedly moving short "Frankenweenie." I had high hopes for "Big Fish," figuring that Burton would at least give me something fabulous to look at.

And while "Big Fish" is colorful (it was shot by Philippe Rousselot), it still manages to feel flat and listless. The score sounds unusually phoned-in and treacly for a Tim Burton movie, and as I watched the movie I wondered, "Where's Danny Elfman when you need him?" -- only to realize that the music was Elfman's. And even though "Big Fish" features a number of Burtonian touches -- like a neighborhood witch who, if you dare to look, can show you the moment of your death reflected in her glass eyeball -- its zany inventiveness feels strained. It's like a movie made by a Tim Burton impostor.

But there sure are lots of stories in "Big Fish," and just about every one of them revolves around the cantankerously lovable Edward Bloom (Albert Finney, who gives some layers of depth to his character by being pleadingly sympathetic and yet not wholly likable). Edward is an inveterate weaver of tall tales, which annoys his son, Will (Billy Crudup), to no end. Will feels that he's never gotten to know his father as a person: Edward has gone through life protecting himself from the drabness of reality with a shield of stories, nearly none of which Will believes. But now Edward has fallen ill, and Will -- who has run off to a new life in Paris with his French wife (Marion Cotillard) -- grudgingly returns home to take care of him. And, of course, the movie gives him the further mission of finding the grains of truth, spiritual or otherwise, in his father's lulus.

Edward's lifetime of stories unfolds before us, with Ewan McGregor -- who has a good deal of cartoonish appeal here, although not much weight -- playing the young Edward. We see him becoming a hero in his small Alabama town, first by becoming a star athlete, then by rescuing dogs from burning houses, and later by "saving" the town's citizens from a not-so-frightening giant (played by Matthew McGrory). Realizing that he, like his new giant friend, is too big for this small town, he leaves home and discovers a Brigadoon-like village in which everyone seems happy all the time and no one ever wears shoes. Later, he joins a circus run by a shrimpy ringmaster (Danny DeVito). Later still, he falls in love at first sight with a sweet, radiant college girl named Sandra (Alison Lohman, who grows up to be Jessica Lange -- a bit of genius casting). After that, he helps a poet-turned-bank robber (played by the always-wonderful Steve Buscemi, who is perhaps the most weirdly appealing performer in the whole movie) on the path to honest riches.

These are, of course, very broad stories, with very broad visuals to go with them: Edward shows up at Sandra's doorstep with, quite literally, 10,000 daffodils (he has learned it's her favorite flower). Stationed in the army in Korea, Edward cobbles a way to get home to the United States and to his beloved, taking with him a pair of bombshell Korean lounge singers who happen to be conjoined twins. (Played by Ada Tai and Arlene Tai, they're one of the movie's wittiest, and loveliest, images.) Everything here is supposed to be dreamy and unreal and bigger than life, because these are mythical tales, fabrications whose truth is ingrained in their spirit. Will, who has resisted his father's fanciful ways of looking at the past, needs to give himself over to the meaning at the core of these stories before he can be redeemed.

But you just may have lost patience with everyone by the time that happens. Will can't bring himself to act like a grown-up, even when his father is gravely ill: He comes off as simpering and self-involved almost right up to the end. Then again, by the jillionth time Edward launches into his characteristic story-tellin' drawl ("Did ah evah tell you about the time ah used a pancake to fend off a man-eatin' alligatah?" -- OK, that one's not in the movie, but it may as well be), you start wondering how many more tiresome tales this old windbag has in him.

I'm sure that's not the effect Burton intends -- he's most certainly hoping to warm our hearts with this giant Sterno can of a movie. But there's something garishly overcooked about "Big Fish." It's nicely made, well shot, and reasonably well acted, yet it's enough to filet the life force right out of you. We need stories in order to dream, and to live. But that doesn't mean we have to buy every crappy one that comes down the pike.