Matt Damon and Greg Kinnear play conjoined twins with a burger franchise and a dream, in this surprisingly gentle, low-key holiday confection from the Farrelly brothers. 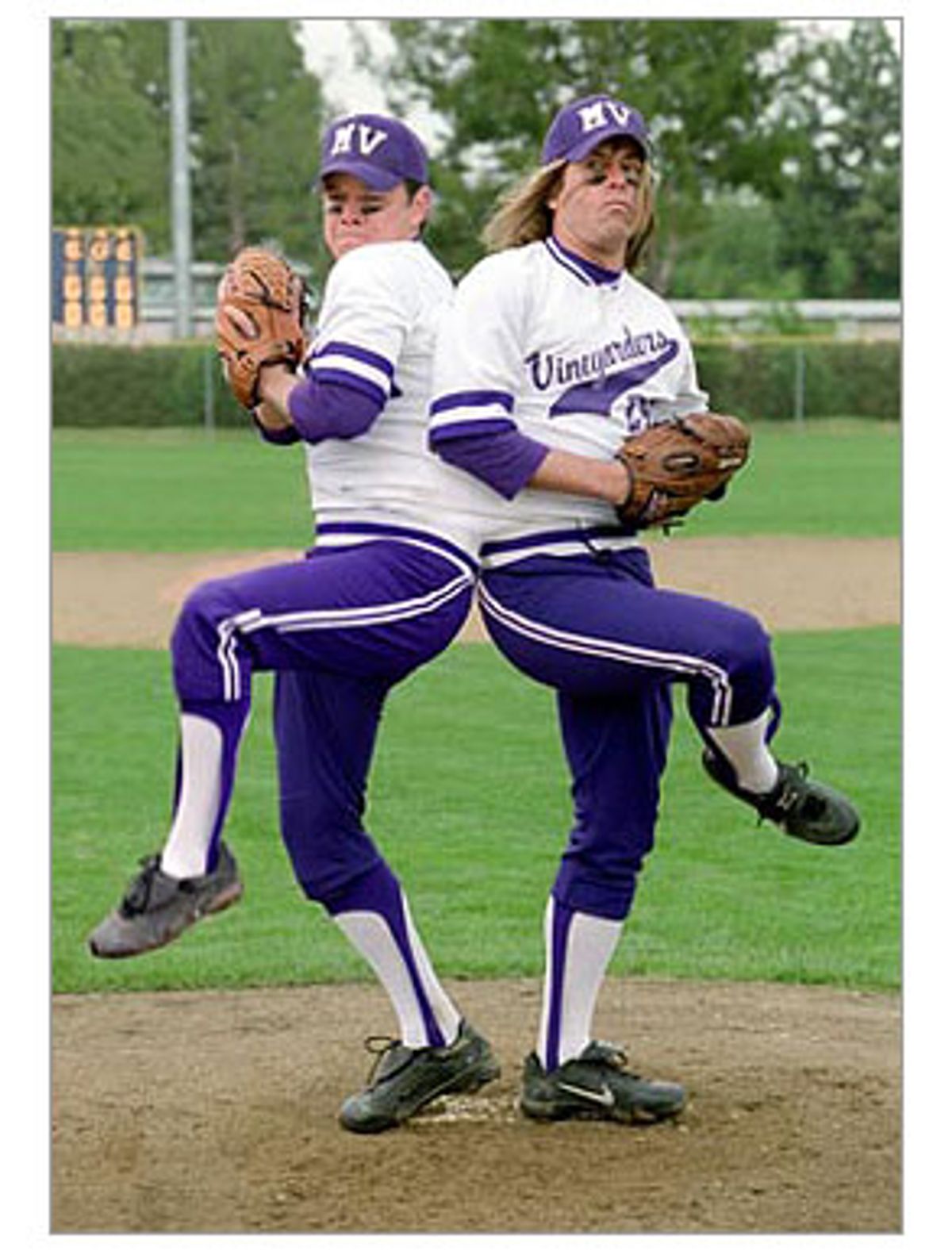 The dirty secret about the Farrelly brothers is out: Even though they made a name for themselves by spinning out ever more outrageous gross-out jokes (a nearly symphonic diarrhea sequence in "Dumb & Dumber"; the brilliantly silly hair-gel charade in "There's Something About Mary"), they're essentially sweet-natured humanist filmmakers who happen to enjoy toilet humor. The themes of their movies are never complicated -- their finest one, "Shallow Hal," is simply about being able to see the beauty inside people, as opposed to judging them by how they look -- and maybe that's why they resonate with audiences. Even though the Farrellys are always mining larger truths amid the silliness, they don't make movies that feel as if they were made from lesson plans. The toilet humor makes us feel complicit in a naughty little scheme, and that's the exact opposite of being preached at. It's a fine line to walk, and nobody does it better than Peter and Bobby Farrelly.

So maybe it should come as no surprise that "Stuck on You," in which Matt Damon and Greg Kinnear play a pair of conjoined twins named Bob and Walt, is actually a supremely gentle movie. There are some fine, raunchy gags: At one point Walt ponders a crossword-puzzle clue asking for a four-letter word for "snatch," and the answer is G-rated, even if the question isn't. But the Farrellys, wisely, don't try to top themselves in terms of gross-outs. The jokes in "Stuck on You" are easy and relaxed, and the picture ambles along amiably. It's a friendly, unpretentious little thing -- at times it's a bit too muted and indistinct, but then, you have to at least give the Farrellys credit for not making the mistake of trying too hard.

The movie's great gag, of course, is that Walt and Bob are completely different personalities who have worked out a system for getting along, more or less. Walt is an actor, an outgoing fellow who's also sexually gregarious; Bob is shy and awkward, and his attempts to make jokes sometimes hit the sidewalk with a splat (which is usually very funny in itself). Connected by a web of skin since birth, the pair have figured out how to live in a way that's pretty close to normal. In the famous Farrelly manner, the people around them in the small Martha's Vineyard community where they live and work barely acknowledge that there's anything different about them. It's only boorish strangers who gawk and make jokes, and Bob and Walt are so comfortable with themselves, and each other, that they're almost surprised whenever they find themselves the target of stupid behavior. "We're not Siamese, we're Americans!" Bob says indignantly at one point, sounding shocked that the politically incorrect "S" word should even come up.

Bob and Walt run a fast-food joint called Quickee Burger, and in one of the movie's most marvelous sequences, we watch them fill a massive order in under a minute. It's a dance routine that sets up just about everything we need to know about how the characters interact: Bob flips the patties and tosses them one by one over his shoulder to Walt, who slaps them neatly onto the buns -- he taps a tin cup on the counter to signal that he's ready for the next one, so Bob never has to look away from what he's doing. The pair move in tandem like an octopus in an old Walt Disney cartoon, their minds and their limbs uncannily syncopated.

Bob and Walt are happy enough on the Vineyard, but Walt has a dream: He wants to go to Hollywood and try to make it big as an actor, despite the fact that whenever he's performing, stage fright-stricken Bob cowers behind him, trying to look inconspicuous even as he's drenched in nervous sweat. But Bob doesn't want to hold his brother back, and so the two head for Los Angeles, where they almost immediately become friends with a knockout hottie named April (played with fabulously unself-conscious wit by Eva Mendes) and locate a true old-school agent for Walt -- he has the marvelously implausible name of Morty O'Reilly, and he's played by Seymour Cassel in a pair of chunky, Swifty Lazar-style glasses. (O'Reilly is a senior citizen on the go, and he travels by motorized cart -- the mere sound of the thing zipping hither and thither is inexplicably funny.)

Walt and Bob's adventures in Hollywood unfold so airily that "Stuck on You" often feels more like a fairy-tale confection than a mass-market comedy. What's never in doubt is Walt and Bob's grudging affection for each other, even when they're wrestling each other like schoolboys on the playground. (The Farrellys have obviously styled the characters as cartoon metaphors for themselves, two directors, related by blood, who are so much in sync that they probably sometimes feel joined at the hip.)

Damon and Kinnear lob their lines back and forth, keeping them light and lofty. Sometimes they're funny at the time, and sometimes they don't hit you until later -- but mostly they work even without smacking the obvious marks. (The Farrellys wrote the script, with Charles B. Wessler and Bennett Yellin contributing ideas for the story.) Bob, who hasn't had a date in years, does have an e-mail pen pal named May (when we meet her in the flesh, she's played by Wen Yan Shih with just the right mix of sweetness and sharp good sense). In one scene, before the big move to Hollywood, Bob types a letter to her ("Thanks for the latest picture; I look at it whenever I'm in need of a smile") while Walt, on the other side of the curtain that discreetly bisects their double bed, has some rambunctious fun with a cutie he's just met in a bar.

That's the kind of pleasantly ridiculous, if not uproariously funny, humor that "Stuck on You" coasts on. Cher and Meryl Streep both appear in the movie, playing themselves, which prompts a great line from Mendes' April: "I love it when famous people turn out not to be dickwads!"

Most of us have no idea what Peter and Bobby Farrelly are like in real life, but their movies -- so far, at least -- suggest that they're regular people who just happen to be smart and hugely successful filmmakers. "Stuck on You" is a modest picture on all levels -- it's entertaining, not groundbreaking. But it always feels as if it were made by and for actual people, instead of for some Hollywood-defined "target audience." Maybe that, right there, is the secret of Peter and Bobby Farrelly's success. Somehow it's easy to believe that no matter how famous they get, they'll never turn out to be dickwads.