Movies and video games get blamed for acts of senseless violence all the time. But some famous murderers got their ideas from literature. 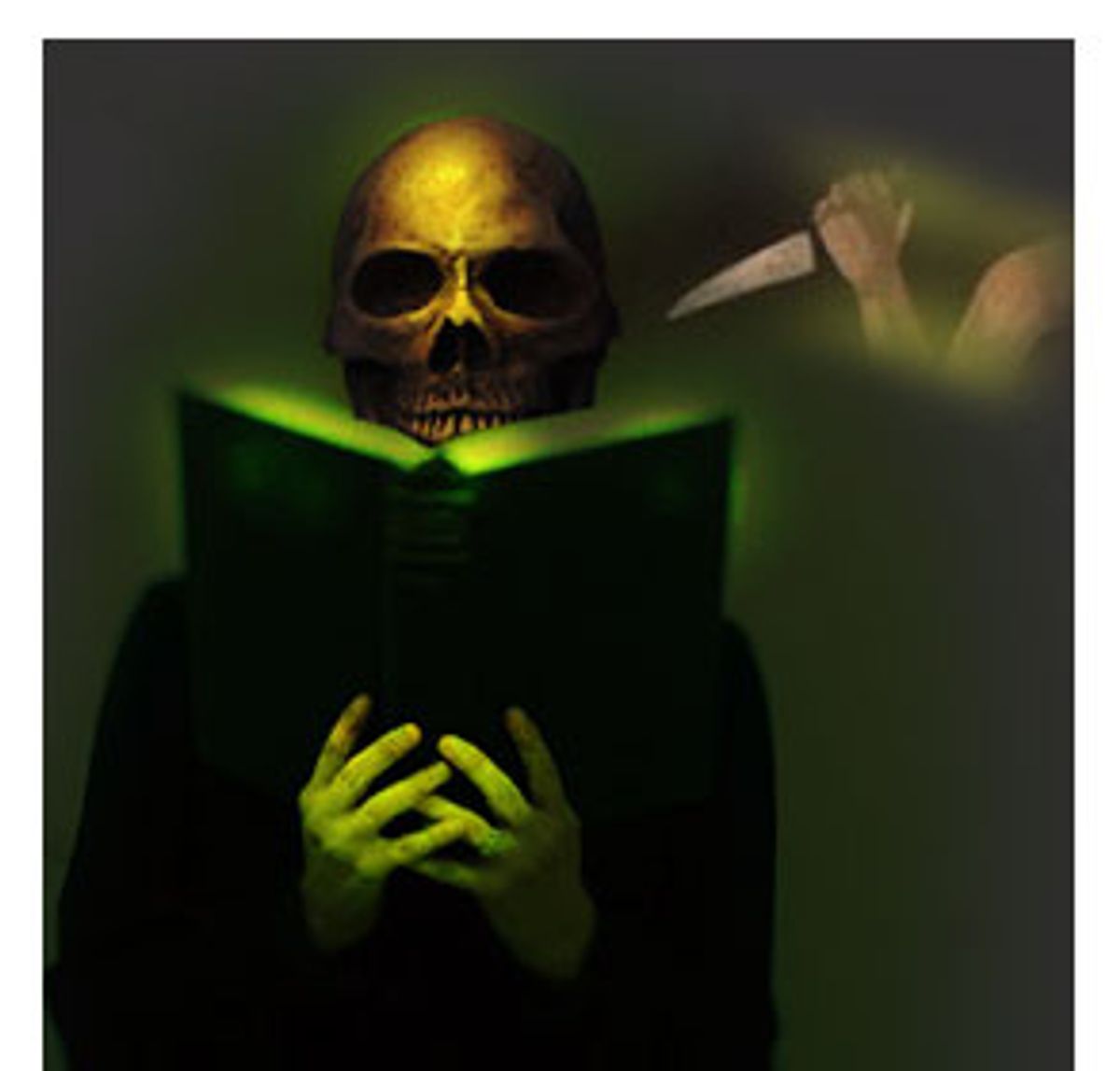 We've all heard about how computer games and films have supposedly influenced people to commit violence. In October a $246 million lawsuit was lodged against the makers of the game Grand Theft Auto III by the families of two people shot by teenagers allegedly inspired by the game. Such movies as "Natural Born Killers," "A Clockwork Orange" and "Money Train" have routinely been accused of inspiring copycat crimes. But what about novels? Is literature incapable of inspiring moronic acts of mayhem?

Many of the controversial novels of the last century were publicly condemned because it was believed they would lead to a decay in public morals. These criticisms were often patronizing ("Won't somebody please think of the children?"), expressing the belief that less educated members of society were likely to imitate anything and everything they read. The prosecutor in the 1960 British obscenity trial of "Lady Chatterley's Lover" asked jurors if it was the kind of book they wanted their wife or servants to read.

As ludicrous as that may sound today, obviously people are influenced by what they see and read, and authors have little control over how people will react to the ideas in their books. Although Isaac Asimov was a fierce critic of religion and New Age thinking, the Japanese doomsday cult Aum Shinrikyo was heavily influenced by his "Foundation" series of novels. The novels depict a universe where a galactic empire has become decadent and ripe for collapse. The empire's ruling planet is a vast hive of people and the only natural environment is the garden surrounding the emperor's palace. Only the foresight of Hari Seldon and his secret society of scientists can preserve civilization's knowledge before it is lost in the dark ages. Seldon's followers convert their society into a religion, believing "it is the most potent device known with which to control men and worlds."

Although Asimov based his empire on ancient Rome, members of Aum Shinrikyo saw similarities between Asimov's empire and modern Japanese society. The cult's founder, Shoko Asahara, preached that civilization was coming to an end and only the faithful would survive. He gathered around him a team of scientists from diverse disciplines. David Kaplan and Andrew Marshall's "The Cult at the End of the World" outlines how the cult's chief scientist, Hideo Murai, saw Aum's mission to save humanity from the coming apocalypse as mirroring the Foundation's struggle:

"In an interview, Murai would state matter-of-factly that Aum was using the Foundation series as the blueprint for the cult's long term plans. He gave the impression of 'a graduate student who had read too many science fiction novels,' remembered one reporter. But it was real enough to the cult. Shoko Asahara, the blind and bearded guru from Japan, had become Hari Seldon; and Aum Shinrikyo was the Foundation."

Asahara directed his scientists to create a variety of chemical and biological weapons to fight their enemies. When the predicted apocalypse wasn't forthcoming, Asahara decided to take matters into his own hands. On March 20, 1995, some of his followers released sarin gas in the Tokyo subway, killing 12 people and injuring more than 5,000.

An article in the Guardian, the British newspaper, speculated that "Foundation" may have also influenced Osama bin Laden and al-Qaida. It related claims that "Foundation" had been translated into Arabic under the title "al-Qaeda" -- which means the base or foundation -- and that bin Laden might have identified with the idea of a small group of rebels fighting against a decadent evil empire. This speculation has not, however, been widely accepted. It isn't even clear that an Arabic version of the novel was ever published.

"Foundation" is not the only novel to have influenced terrorists. A copy of "The Turner Diaries" was found in Timothy McVeigh's car when he was arrested. The novel was written by a leader of the National Alliance and tells the story of a white supremacist group that overthrows the government and subsequently eradicates nonwhites as well as "race traitors." The narrator destroys FBI headquarters by detonating a truck loaded with ammonium nitrate and fuel oil. McVeigh used a similar mechanism to destroy the federal building in Oklahoma City, killing 168 people.

Several of McVeigh's friends testified he had given them copies of the book, encouraging them to read it. McVeigh had highlighted phrases in his copy of the book including: "the real value of all of our attacks today lies in the psychological impact, not in the immediate casualties," as well as one promising that politicians will not escape: "We can still find them and kill them." The novel ends with the narrator flying a bomb-laden plane into the Pentagon.

Another bomber with a fondness for reading was Ted Kaczynski. The Unabomber was a big fan of Joseph Conrad's "The Secret Agent," an ironic novel in which a university professor turned anarchist is recruited to blow up a scientific icon, London's Greenwich Observatory. A Washington Post article revealed that prior to Kaczynski's arrest, the FBI had suspected the novel's influence and contacted Conrad scholars to help them in constructing their profile.

Author Joe Haldeman has spoken about the unintended influence of a short story he published in the Magazine of Science Fiction & Fantasy in 1974. In "To Howard Hughes: A Modest Proposal," a blackmailer forces world disarmament by developing his own nuclear bomb. Haldeman says the story contained "pretty detailed instructions for acquiring plutonium and constructing a subcritical nuclear device (information not that easy to find, pre-Internet, but nothing classified) ... [Someone] used the story as a template and wrote a blackmail letter to the mayor of Los Angeles, saying he had a van parked somewhere downtown with a nuclear bomb in it, and he'd blow it up in 24 hours if he didn't get a million dollars, delivered to such-and-such a park at noon. Evidently the details were accurate enough for them to respond with a suitcase full of money, and of course a park full of agents disguised as normal people. The miscreant turned out to be a 15-year-old science fiction fan."

Science fiction operates on a grander scale than other genres, often portraying world-changing events that can be attractive to people who want to change the world. Such was the case with Robert Heinlein's highly influential novel "Stranger in a Strange Land." Time magazine reported that Charles Manson used the novel as a blueprint for his infamous family and that it led to the murder of Sharon Tate and others. It was later revealed, however, that Manson had never read the novel.

Some of Manson's followers had indeed adopted ideas and terminology from the book into their rituals. "Stranger in a Strange Land" features a Martian with superpowers who comes to earth and starts a free love movement. The novel also influenced others to form their own polygamous societies, including a "neo-pagan" group known as the Church of All Worlds. The church's Web site explains how its founders were inspired by Heinlein's novel: "This book suggested a spiritual and social way of life and was a metaphor expressing the awakening social consciousness of the times." (The Church of All Worlds has not been linked to any murders.)

Films reach a much wider audience than novels and often the real public outcry about a book isn't raised until the film version is released. "A Clockwork Orange" was blamed for inspiring so many copycat crimes -- from homeless people beaten to death to a gang rape where the attackers sang "Singin' in the Rain" -- that director Stanley Kubrick had it withdrawn from cinemas in England. The book's author, Anthony Burgess, insisted that there was no definitive proof "that a work of art can stimulate antisocial behavior ... the notorious murderer Haig who killed and drank [his victims'] blood said he was inspired by the sacrament of the Eucharist. Does that mean we should ban the Bible?"

Burgess was later to change his mind after the 1993 murder near Liverpool, England, in which 2-year-old James Bulger was abducted and tortured to death by two 10-year-old boys. The horror film "Child's Play 3" was linked to the case, and Burgess wrote that he now accepted the arts could exert a negative influence, adding, "I begin to accept that as a novelist, I belong to the ranks of the menacing."

Criminals will sometimes blame a work of fiction for their crimes, hoping to shift responsibility. These claims are inevitably treated with considerable skepticism. But one book that has been linked to a number of serial killers is John Fowles' "The Collector." The 1963 novel tells the story of a butterfly collector who becomes so obsessed with a woman called Miranda that he kidnaps and imprisons her in his cellar. California serial killers Charles Ng and Leonard Lake named one of their schemes "Operation Miranda." Lake later committed suicide, but Ng was found guilty of the imprisonment, torture and murder of 11 people during the 1980s. Ng blamed Lake for the murders and said he had been inspired to capture the women after reading "The Collector."

In Fowles' novel, Miranda encourages her kidnapper to read "The Catcher in the Rye," hoping he might identify with Holden Caulfield's feelings of alienation. Her captor complains that he doesn't like the book and is annoyed that Holden doesn't try harder to fit into society. There are enough rumors about murders linked to J.D. Salinger's classic that the unwitting assassins in the Mel Gibson film "Conspiracy Theory" are portrayed as being brainwashed with the urge to buy the novel.

John Lennon's murderer, Mark David Chapman, was famously obsessed with "The Catcher in the Rye." Chapman wanted to change his name to Holden Caulfield and once wrote in a copy of the book "This is my statement," and signed the protagonist's name. He had a copy of the book in his possession when the police arrested him.

French author Max Valentin (a pseudonym) got more than he bargained for when he wrote "On the Path of the Golden Owl," a 1993 novel featuring clues to the location of a real-life buried treasure. France was gripped with treasure-hunting fever as readers tried to find a replica of the golden owl (which could be exchanged for the real one) that Valentin had buried somewhere in rural France. In an interview with the Times of London, the author said he had received death threats and bribes amid the torrent of mail from people wanting to know where the owl was hidden.

He does not customarily respond to questions about the owl's location, but once had to intervene to stop someone from digging up a cemetery. Others have gone even further. "There was one who tried to dig up a train track," he said, "and another who walked into a bank with a pickaxe and started to dig up the floor of the lobby. I've told everyone it is buried in a public place but some people are crazy ... a man had firebombed a church and left behind a book containing the message: 'The golden owl is underneath the chapel.'" After more than 10 years, no one has yet managed to find the golden owl.

Aidan Doyle is a freelance writer based in Australia. He aspires to join the ranks of the menacing.