Helen Mirren and a cast of middle-aged Yorkshire roses doff their Laura Ashley duds for charity. It's a sweet, sexy fable, even if it runs out of oomph too early. 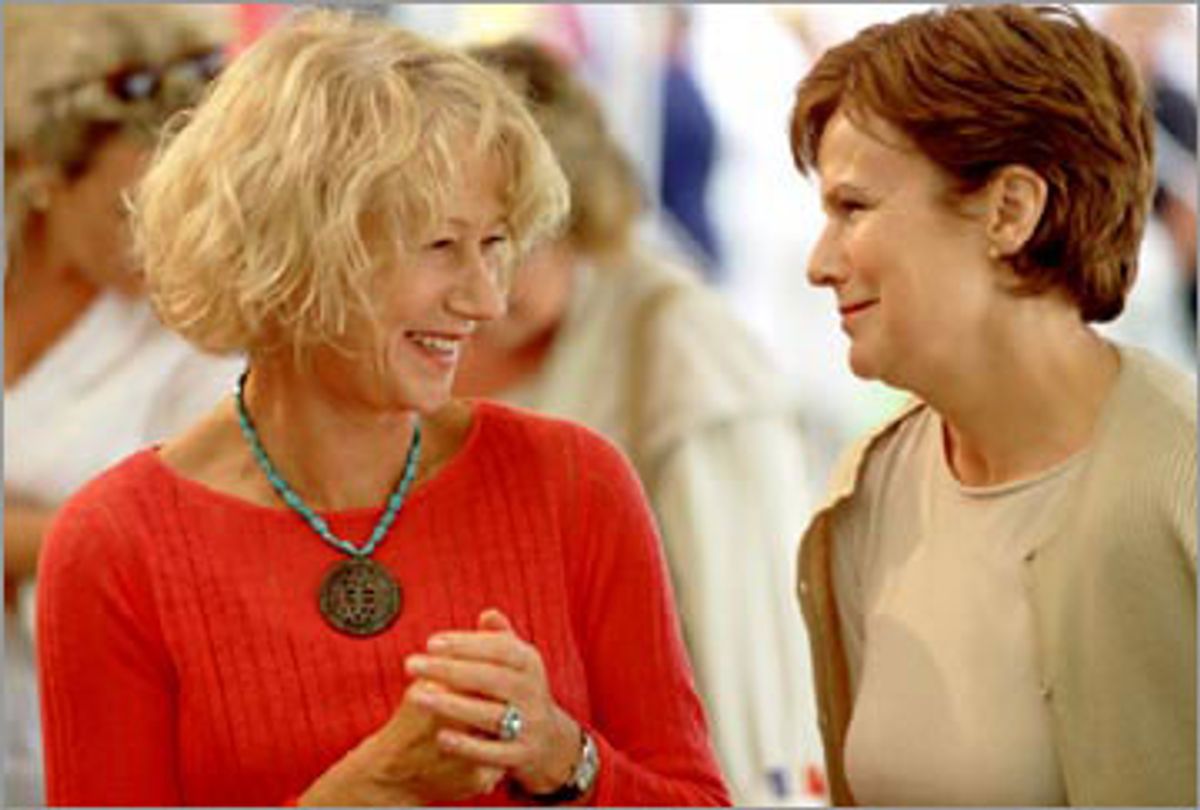 "Calendar Girls" is based on a true story about a Yorkshire women's group that some years ago decided to jazz up its fundraising calendar by posing for it in the semi-nude, their private parts discreetly hidden behind strategically placed flora or baked goods. Both the press and the public had a grand time with the story, and you can see why: The idea of a group of middle-age-ish and older women (proper English ones, no less!) peeling for public consumption seems refreshingly healthy, particularly considering the way many women feel about their bodies as they age. The calendar, aside from making lots of money for the group, also suggested that sexual attractiveness has less to do with age than it does with playfulness and confidence.

It's too good a story not to have been made into a movie. Yet "Calendar Girls," directed by Nigel Cole ("Saving Grace"), is filled with lots of extras it doesn't need, when the bare-naked bones of the story would have been plenty. Julie Walters plays Annie, a woman whose life is jiggled off track as she deals with the illness and, eventually, the death of her husband, John (John Alderton). Her best friend, Chris (Helen Mirren), the group's chief fun-loving troublemaker, rallies the members of the local women's group, proposing that they raise money for a charitable cause in John's memory. Inspiration strikes when she spots a nudie calendar in a workman's garage. The idea also meshes with something John himself said to his wife shortly before he died, about how the women of Yorkshire are like the flowers of Yorkshire: The last stage is the most glorious. (He rescues the line from being too syrupy by adding a typically English kicker: "And then they go to seed.")

The first half of "Calendar Girls," in which each of the women involved in the calendar's planning comes around to the idea of posing in the almost-altogether, and then they go about getting the damn pictures taken, is a charming trifle. Mirren, especially, is wonderful to watch. Her timing is lovely, and without hammering on the admittedly pathetic message "Older women can be sexy too!" she is, well, sexy: She has a great moment in which she offers herself as a guinea pig to show the other women how easy it is to face the camera in the buff, positioning herself coyly behind a full fruit bowl. She settles there with a smug little smile, only to have the whole arrangement topple aside inopportunely, exposing the naughty bits she has concealed so carefully (in front of her teenage son and his friend, no less). Mirren plays the scene with so much good humor, tinged with vague embarrassment, that she's irresistible. And while we're at it, let's just say that she's definitely got the goods.

There's a lot more full-fruital nudity in "Calendar Girls" as the other women -- the actresses include Annette Crosbie and Penelope Wilton -- more or less follow Chris' lead, each overcoming her own shyness or reservations. The montage sequence in which we see them gamely giving their all for the camera (intercut with examples of the finished product) is pure delight. But before long, you sense that screenwriters Tim Firth and Juliette Towhidi knew they had to start truffle-hunting for some sort of conflict -- as if women's conflicted feelings about their own bodies weren't enough.

The uptight president of the women's group expresses her stern disapproval of the calendar, and Chris and Annie have to appear in front of a ladies' tribunal to make their case. (It's a sea of Laura Ashley outfits that would strike fear into the staunchest hearts.) One of the pinups has an unfaithful husband, and her embrace of the project represents her liberation from a bad marriage. As if all that weren't enough, the group is invited to Hollywood for a "Tonight Show" appearance (Jay Leno shows up as himself). There, they learn the thunderously significant lesson that fame must not be allowed to go to one's head.

In other words, the movie punishes the women for having fun, simply because if it didn't, there'd be no plot. And that's a shame -- the lesson-plan structure cuts against the movie's intended message in the first place. The sight of these women as they slowly come around to recognizing their own beauty is all the drama the movie needs. Unlike the flowers and the women of Yorkshire, "Calendar Girls" hits its stride early on, and goes to seed well before we can enjoy its full bloom.