Dean-bashers say Sen. Clinton's hawkish talk about Iraq this week was a rebuke to the Democratic front-runner. At least they hope it was. 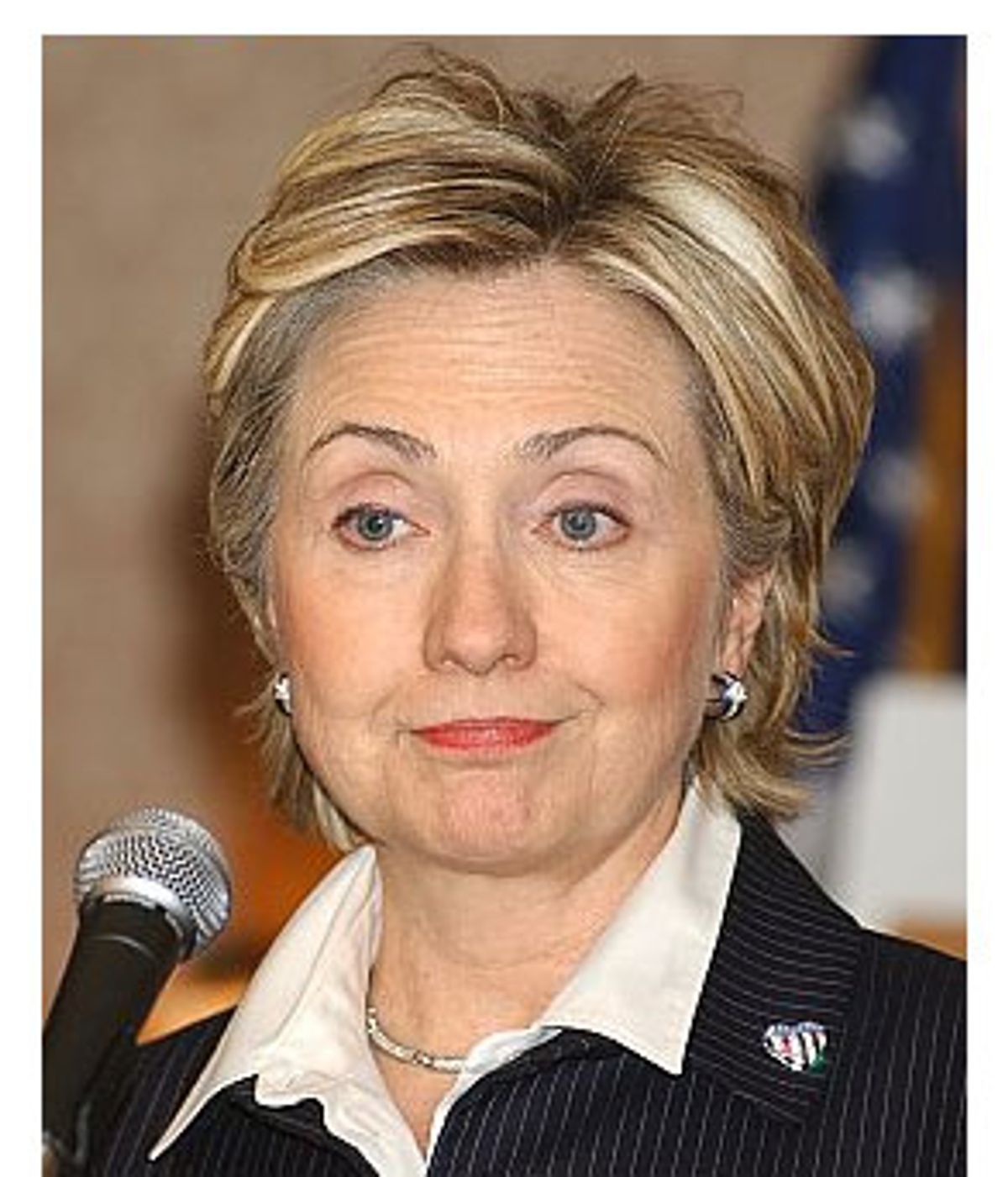 While Howard Dean and his Democratic rivals fought an increasingly bitter war of words over Iraq this week, the debate was joined by a leading Democrat who's not running for president, Sen. Hillary Clinton. And in a measure of the sway the Clintons continue to hold over Democrats, both sides sought to put their own spin on her words.

After the capture of Saddam Hussein, the senator from New York laid out her own views on Iraq, in speeches and in interviews. She articulated sharp criticisms of the Bush administration while staking out an unapologetically hawkish position on Iraq.

"I was thrilled that Saddam Hussein had finally been captured," she said in a Monday speech to the Council on Foreign Relations in New York. "Like many of you, I was glued to the television and the radio as I went about my daily business. We owe a great debt of gratitude to our troops, to the president, to our intelligence services, to all who had a hand in apprehending Saddam. Now he will be brought to justice, and we hope that the prospects for peace and stability in Iraq will improve." Clinton made four key points: She doesn't regret voting to authorize the president to go to war; she's "delighted" that Saddam Hussein was captured; American troops should stay in Iraq for as long as they're needed, and at higher levels than present, if necessary; and the postwar fight to secure Iraq is crucial.

Although talk of a secret plan for a late entry into this year's race has mostly died down, Clinton has continued to lay the groundwork for a potential run for president in 2008, traveling around the country to give cheerleading speeches and putting her considerable fundraising ability to work for local party organizations and congressional candidates across the country. But with her talk about Iraq last week, it's clear she'll continue to play a role in the 2004 race, which is increasingly polarized on the topic of the war.

Figures in the Democratic firmament already fearful of Dean's formidable candidacy tried to use Clinton's speech to show there's a significant -- and worrisome -- distinction between the Dean worldview and the foreign policy legacy of the Clinton administration. Dean was hammered much of the week for a line in the foreign policy speech he delivered Monday, the day after Saddam's capture. Although the address was designed to establish his credentials as a foreign policy centrist -- to deliver a message that he would go to war when necessary -- coverage of the address was dominated by his statement that Saddam's capture "did not make America safer." Sen. Joe Lieberman has spent the week bashing Dean for the remark, insisting the former Iraqi dictator "would still be in power today and not in prison" if Dean had his way. On Friday Lieberman turned up the volume, warning against replacing "one divisive leader with another divisive leader," linking Dean with President Bush.

Democratic Leadership Council founder Al From, who has been scathingly critical of Dean, praised Hillary Clinton's Monday speech for "laying down some markers" that he hoped would affect the debate in the Democratic Party.

"I think she's first of all staking out this position because she thinks it's right for the country and the Democratic Party," said From, who helped shape Bill Clinton's centrist platform in the early '90s. "I also suspect she's laying down these markers because she hopes that Dean or whoever the nominee is will pay attention to it. She's an important voice in this party. And the Clinton legacy on foreign policy, on the domestic front, on the economy and reducing poverty is a legacy built on eight years of success, not a legacy determined by activity on the Internet five weeks before a primary, before anyone has cast a vote."

Rep. Anthony Weiner, D-N.Y., had a similar interpretation. "I think many more Democrats would consider themselves Hillary Clinton opponents of the war than Howard Dean opponents of the war," said Weiner, who is supporting Wesley Clark. "Even the most strident opponents of the war would have to be taken aback by what seems to be Howard Dean's unwillingness to treat Saddam's capture as a major victory for America. This is another chapter in what seems to be a conscious and perhaps suicidal attempt by Dean to walk as far away as possible from the Clintons' moderate stance on foreign policy. I mean, he's tapped into the angry vote, but he's wrong if he thinks people are angry at the Clintons."

Dean's people don't see it quite that way.

"Hillary Clinton talked about what she would do in Iraq, but everything else she believes is not that much different from Howard Dean," said one of Dean's foreign policy advisors. "I think the only people who would see a division here are the ones who say that the only way you can have hair on your chest is to be 'right' about Iraq, and who think what happens in Iraq now is the single dominant issue in foreign policy right now. There are a lot of experienced people on the left and right who don't feel that to be the case."

A spokesman for the Dean campaign also pointed to Dean's support from foreign policy advisors like former Secretary of State Warren Christopher and former national security advisor Anthony Lake, as well as from former Vice President Al Gore, as evidence that his positions are consistent with Clinton administration policy.

And some Dean defenders come from the camp of retired Gen. Wesley Clark, who is widely -- though without proof -- thought to be the Clintons' preferred candidate. "I think Dean's had a very rough week and a very unfair week," said Rep. Charles Rangel, who frequently boasts of his relationship with the Clintons but was a fervent opponent of the war in Iraq. "He's catching hell from a large number of people for having said that the capture of Saddam Hussein does not make America any safer. I support Clark because I think he can beat Bush better than Dean. But I say thank God for Dean, because he was the first one to take on the president on the war issue."

Clinton staffers said the senator's criticism of the status quo was aimed at the Bush administration, not at any of the Democratic contenders. And they said her pronouncements on foreign policy were first and foremost the result of her trips abroad, and of her service on the Armed Services Committee.

"She's seen firsthand with the Clinton administration how you can conduct successful foreign policy by using your allies, and so she's taken exception with the current administration not only on Iraq, but on North Korea and the Middle East," said spokesman Philippe Reines. "She'd obviously like to hope that her suggestions and criticisms do affect the way the way this administration approaches postwar Iraq, Afghanistan and elsewhere."

Of course, the highly detailed foreign policy presentations that have followed Clinton's return from visiting the front lines have another very definite purpose, which is to position her ideally for her own political future. Since coming to office Clinton has done all the right things for someone preparing to run for higher office: She has been a model of nonpartisanship in the Senate even as she accumulates chits by engaging in ceaseless party-building and fundraising activity around the country. She has immersed herself in the small-bore constituent concerns of New York residents while still maintaining her presence on the national stage. And she has gone some way to undoing the lefty-firebrand reputation she earned during her years as first lady.

According to that formulation, it can only be a help to her going forward to position herself as a relative hawk among Democrats, even as Dean's ascendancy suggests a distinctly antiwar current among Democratic voters. "Mrs. Clinton got a tag, fairly or not, of being the ultra-liberal in the Clinton administration, and that doesn't get you very far in national politics," said New York-based consultant Norman Adler. "So this is an effort to remove the tag and put it in another place. It worked for her husband, so why shouldn't it work for her?"

Some of Clinton's most bitter enemies expressed grudging admiration for her, even as they hoped that whatever contrast exists between her posture on Iraq and Dean's would grow into a fatal split for the Democrats in 2004. "What she's doing is really a smart play," said Republican consultant Rick Wilson, who worked on Rudolph Giuliani's aborted Senate bid against Clinton in 2000. "She's making sure that no one can write her into the super-loony left-wing Howard Dean box that's been dominant so far in this primary. And she's doing what her husband did when he got elected -- he talked plenty tough, because he recognized that if you let the McGovernite wing of the party out of the basement, they'll lose every election until the end of time."

"But," he said, "it makes Dean look diminished every time her message emerges, and knowing her desire for influence, that situation is not going to improve."

The attempt to portray Dean as an enemy of the Clinton legacy took a new, even harsher twist Thursday, over a few lines in a Dean speech on domestic policy. "While Bill Clinton said that the era of big government is over, I think we have to enter a new era for the Democratic Party, not one where we join Republicans and aim simply to limit the damage they inflict on working families," the Democratic front-runner said. Dean's opponents were quick to respond. "If you look at the language, it sure looks like he's being critical of the Clinton idea that the era of big government is over," Lieberman said Friday.

Dean immediately denied he intended any criticism, and his staff sent reporters a long list of examples in which Dean had praised Clinton -- and the former president had praised Dean. "Howard Dean was one of my strongest supporters as governor, especially on healthcare," Clinton reportedly told the New York Sun earlier this month. And in 1997 he told a Democratic governors' group: "I'd also like to say that whatever it is that Howard Dean knows, or whatever it is that he eats for breakfast every morning, if I could give it to every other Democratic office holder and would-be office holder, we would immediately become the majority in the Congress and we would have about 35 governors."