Anthony Minghella's pretty, star-studded adaptation of the bestselling Civil War romance never makes it above freezing. And, gee, didn't those Southern whites have it rough? 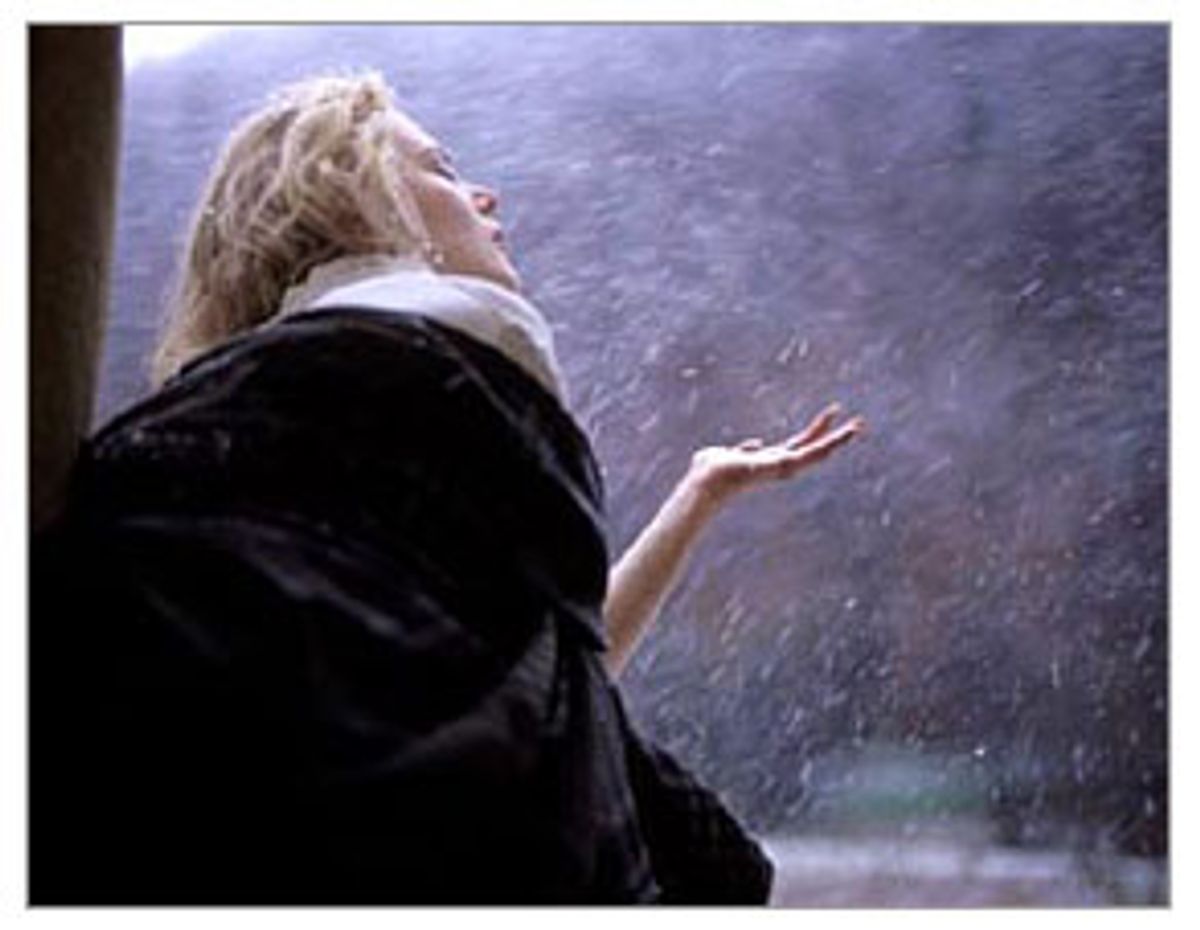 "Cold Mountain," the long-awaited Civil War epic adapted by Anthony Minghella from Charles Frazier's acclaimed novel, is ruthless and realistic in its portrayal of the hardships faced by Southerners during the war between the states. The white ones, that is: There are about 12 African-Americans in "Cold Mountain," and if you don't blink you might catch them as they scoot by discreetly in a few select scenes, blending into the background in a "Don't mind me!" blur. But then, discretion is the county "Cold Mountain" lives in. Slaves are referred to, with exquisite drawing-room politeness, as "Negroes." Best to acknowledge their existence only minimally, lest the whole notion of slavery blight the chilly romantic sheen that Minghella has worked so hard to achieve.

Who needs actual black people? "Cold Mountain" is a romance, refreshingly free from the taint of any political realities other than the "War is hell" variety. It's also completely juiceless. As you might expect from romance-of-the-living-dead director Minghella ("The English Patient"), "Cold Mountain" seems to unfold under a glass jar, a curlicued curiosity designed to make us marvel at how meticulously wrought it is. The picture takes place in North Carolina, largely on a mountain that is indeed cold, and the picture (it was shot by John Seale) has a suitably crisp, icy look. But even if "Cold Mountain" is pretty to look at, it never comes close to tipping above the freezing level. It's a historical romance with more class than sex appeal: Sex sells, but it's class that wins you awards.

Among the first words we hear in "Cold Mountain" are those of Nicole Kidman's lovesick Ada, written in a letter to Jude Law's Inman, the Confederate soldier she loves: "This waw-ah -- this awful waw-ah -- will have changed us both beyond our reckoning." Waw-ah is, as we've already ascertained, hell, and as proof of that, we see Inman and his fellow soldiers engaged in bloody battle with Union troops somewhere in Virginia: Bayonets stab through skin; bullets rip through chests. Inman is injured, but he rouses himself from his sickbed to walk the 300 (or is it 3,000?) miles back to his beloved Ada.

As Inman walks -- and walks -- his and Ada's stories interweave, laced together by Ada's letters, read in quavery voiceovers by Kidman. Inman faces many struggles and fends off the advances of womenfolk right and left, including a lonely widow, played by Natalie Portman, who lives alone with an ailing infant. In her devastating loneliness, she makes it clear that all she wants is a hug, but Inman intones, with God-fearing manliness, that he can't do the man-thing with her -- he's saving himself for his woman back home, to reclaim a romance that had barely gotten started before he went away to war.

Ada, for her part, is devastated by Inman's absence. We know this because she stops combing her hair. She has written to him but has received no word back; what's worse, her beloved father (played by Donald Sutherland in an all-too-brief role) has recently died. As Ada's neighbor (Kathy Baker) observes in just one of the movie's many nuggets of homespun wisdom, "Poor soul, she's got nobody and nothin', waitin' on a ghost."

Suddenly, a sparkplug by the name of Ruby (Renée Zellweger), a drifter from who knows where, jolts Ada back to life and helps her find her inner comb. Ruby may sound like Mammy Yokum, but her good sense is invaluable (her first act is to snap a mean rooster's neck with her bare hands), and it allows the two of them to turn Ada's farm, which the pampered Ada never knew how to run in the first place, into a productive enterprise. The women also do their best to fend off the Home Guard, a bunch of toothless townies whose mission is, ostensibly, to round up deserters for a handsome reward, but who seem to terrorize their fellow Southerners just for the pleasure of it.

That's not the whole story of "Cold Mountain." That's not even the half of it: This is an epic, remember, and it moseys along at a suitably stately pace. Kidman and Law are the center of the movie, which means only that they're the two immovable pegs around which it revolves, creakily. Kidman is charming at times, but the movie around her only intensifies her cool remoteness -- you can sympathize with her, but it's hard to warm up to her. Law has a few moments when the matchstick almost strikes: When he leaves Ada to head off to war, he casts one look back at her that captures a few motes of genuine '30s-movie-star dreaminess. But this isn't the right picture to bring that out in any actor, and Law mostly plays Inman as a jointed wooden man, albeit a resolute one.

"Cold Mountain" desperately needs Zellweger: After she twists the head off that rooster, she screws up that baby-doll face of hers and barks an order to Ada: "Let's put 'im in a pot!" Finally, you think, a character who makes sense, one who does something besides just mooning around or walking all the time. Zellweger changes the mood and tone of the picture whenever she's on-screen, as if she were single-handedly lifting a mighty weight off its shoulders.

Brendan Gleeson, who plays Ruby's good-for-nothing father, shares the load: He's a fiddler who shows up out of nowhere with a bunch of tunes and few fellow wanderers (one of them is White Stripe Jack White, who gives a small, sweet, almost wordless performance). Gleeson always makes you feel you're watching a real person and not a figure in a diorama. He's a much more vital presence than either of the movie's two leads.

Once in a while, a scene in "Cold Mountain" resonates, notably the one in which Ada, Ruby, her father and the rest of their makeshift family enjoy a Christmas get-together that looks meager on its surface but is enviable in its warmth. But the rest of the movie is dotted with poetic but silly images, like that of Ada sailing by a field of workmen in a cart, playing a piano on its flatbed. (She's moving the piano to the home she's just moved into with her father, which is as good an excuse as any to put a piano in a cart. But is it really a good idea to play it there?)

A dove trapped in an empty church, the shimmery reflection of a loved one in the water at the bottom of a well: There are some other nice-looking symbols in "Cold Mountain," and they come in handy as Minghella unrolls his multiple messages about the necessity of determination, hope, love and community in our lives as we struggle through the toughest hardships. The Civil War was uglier, and caused more suffering (physical, psychic and political), than many of us often acknowledge. But if nothing else, "Cold Mountain" reminds us of one resounding truth: In their fight for states' rights, the white folks sure had it hard.