Salon's picks for the year's finest novels include off-center tales of the '70s, the slavery era and the Lewis and Clark expedition, a battle with troublesome software code, and the purgatory of boarding school. 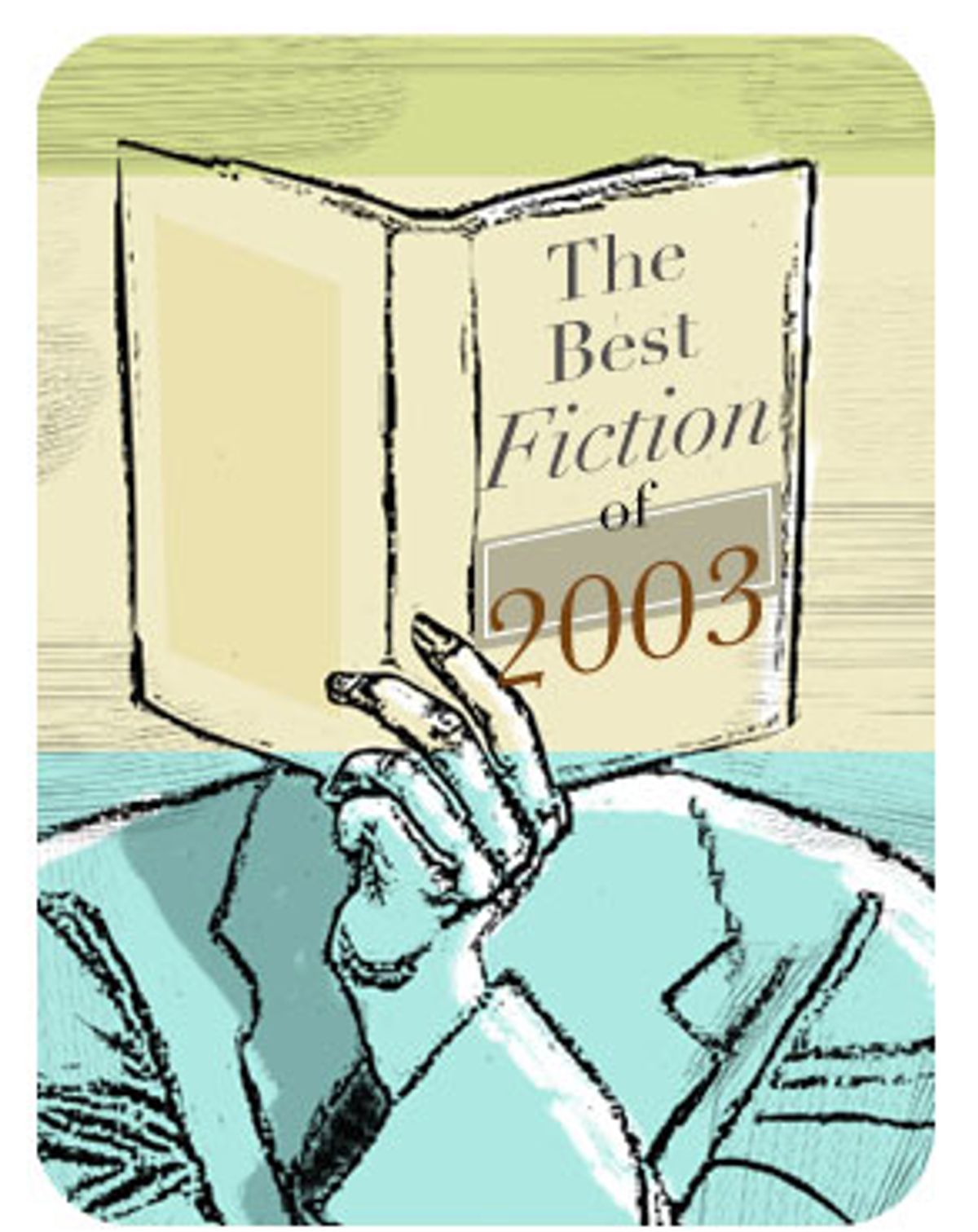 While most of America whiled away its leisure hours on "The Da Vinci Code" (described by one wag as "the worst book I ever loved") and "The South Beach Diet," a few good books did get published in 2003. We can even spot traces of a trend or two. The 1970s emerged as a preoccupation of novelists young (Jonathan Lethem, Susan Choi) and not-so-young (T.C. Boyle), and unreliable narrators continue to pop up left and right. Best of all, despite updated trappings, the time-honored skill of storytelling lives on. These (in alphabetical order) are the books that kept us up late and turning pages in the past year.

Choi combines several seldom-mixed qualities -- believable characters, political intelligence, unobtrusively elegant writing and simmering suspense -- in this story of political and personal disillusionment. Jenny Shimada, the daughter of a World War II Japanese-American internee, has gone underground after a few years in a bomb-planting radical group. Her precarious but isolated new life turns upside down after she reluctantly agrees to harbor a fugitive heiress and her erstwhile kidnappers in a safe house in rural Pennsylvania. Based on one of the few figures in the Patty Hearst affair who behaved with a consistent degree of human decency, Jenny has a long way to go before she finds her place in the world, but her journey is never less than fascinating.

"Any Human Heart"
By William Boyd
Alfred A. Knopf
Order from Powells.com

A bad title and a worse cover seemed to deflect some attention from Boyd's bewitching novel, but there's also the fact that it doesn't sound exciting. It's the "diary" of a fictional Englishman from his boyhood at a boarding school, through early success as a writer and possibly the most pointless espionage gig of World War II, followed by a mysterious, Kafkaesque imprisonment and success as a New York art dealer. Logan Mountstuart is a shoulder-rubber who hangs out with Hemingway and Picasso, abstract expressionists and the royal family, but he's no star himself. Nevertheless, "Any Human Heart" reads like the ideal journal. Frank and unself-conscious, dishy and deep, it's almost impossible to put down once you give it a chance. Boyd makes you feel like you've tapped a hot line into a real, passionate, eventful life, and who'd want to let go of that?

Part Flaubert, part Dickens and all contemporary London, Monica Ali reveals herself, in "Brick Lane," to be the foremost practitioner of the classic novel in the multicultural mode. Her heroine, Nazneen, gets married off to a pot-bellied civil servant looking for an "unspoiled girl from the village," and finds herself transported to a public housing project eons away from her childhood home in Bangladesh. Slowly, the alternate reality of life in England dawns on her, and with it comes a set of unruly desires. Will she violate the moral codes she grew up with and face ostracism from her Muslim peers, or will she draw back from the lonely path of Western-style independence? Is her husband really so bad and the alternative really so idyllic? Once you get past the sari, Nazneen's dilemma wouldn't be unfamiliar to the heroines of George Eliot or Charlotte Brontë, and Ali portrays it with an aplomb they'd appreciate.

"The Bug"
By Ellen Ullman
Nan A. Talese/Doubleday
Order from Powells.com

No one writes more eloquently than Ullman (a Salon contributor) about the peculiar mind-set of the people who create the digital tools we use every day, the software that shapes our work lives and in some ways our imaginations themselves. With "The Bug," she follows up the trenchant essays in "Close to the Machine" with a thriller-like tale of hubris and self-destruction that never stoops to cheap tricks. A software tester and the programmer whose bug she discovers lock horns as they struggle to track down and destroy the mercurial glitch. Acidic vignettes of high-tech business culture alternate with meditations on such 21st century preoccupations as artificial life. At stake is not just the program (and its implacably approaching delivery date), but the fragile belief that we can master ourselves and our fates.

"The Curious Incident of the Dog in the Night-Time"
By Mark Haddon
Doubleday
Order from Powells.com

Christopher Boone, the 15-year-old narrator of Haddon's first novel, has an unspecified form of autism that makes most human contact too much to bear and ordinary emotions unfathomable and uninteresting. When the dog who lives across the street turns up dead, Christopher decides to follow the example of his idol, Sherlock Holmes, and solve the murder. In the process, he turns up evidence that he can't interpret but we can, and the true nature of his home life is slowly unveiled to heartbreaking effect. But Christopher is never pathetic; his investigation tests his fortitude and determination to their limits, and in some ways he's the strongest of all the flailing and misguided people in his world. The result is a droll and finally exhilarating mix of ordinary tragedy and eccentric humor.

Hardly anyone can write about the communal experiments of the '60s and '70s without getting either too starry-eyed or too cynical. Boyle's scaldingly hilarious and remarkably considered tale of an unruly pack of California hippies who decamp for Alaska in search of total freedom manages to hit the sweet spot between the two clichés. Up north, the commune mixes with another breed of American idealist -- those who subscribe to the self-sufficient ethos of the rural West -- and the chemistry is volatile, to say the least. Still, Boyle gives each very different side its due, while never letting either one off the hook. The proceedings are boisterous, the debacles are comic and the author's take on our national dream of self-reinvention is, finally, generous and sympathetic.

"The Fortress of Solitude"
By Jonathan Lethem
Doubleday
Order from Powells.com

Dylan Ebdus comes of age in a funky fugue, one of the few white kids in the 1970s Brooklyn neighborhood where his bohemian parents have decided to put down roots. To the smooth and sinewy beat of the era's soul soundtrack, he tries to reconcile race in the big picture (where people like him come out on top) with the granular reality of his scary experiences on the street. The black friend who tosses him a lifeline, Mingus Rude, has his own troubles, and even a (possibly) magic ring passed to the boys by a homeless man can't entirely overcome the gap between them, especially when punk rock, college and crack come along. "Fortress" is a bruised paean to the hometown of Jonathan Lethem (a friend of and occasional contributor to Salon) and a meditation on American boyhood, but it's also a cautionary tale about the folly of trying to escape your past and the melancholy necessity of coming home again.

"I Should Be Extremely Happy in Your Company: A Novel of Lewis and Clark"
By Brian Hall
Viking
Order from Powells.com

Hall tells the epic story of the Lewis and Clark expedition from a variety of perspectives, but it's Lewis and Sacagawea who steal the show. This is a historical novel that's unflinchingly honest but doesn't serve a political agenda. It describes the arc of a grand and thrilling journey, but views the progress through the halting, thwarted, damaged psyches of those who make it, one complicated step at a time. Sacagawea is a stifled philosopher, scarred by losses greater than any of her companions can imagine -- if they ever bothered to try. Lewis is valiant, depressed, infatuated with the wilderness and his co-captain and tormented by the impossible demands placed on him by his president and, especially, himself. Hall's portraits of these travelers are never less than utterly convincing and his sense of the strangely fruitful intersection of great deeds and human failings is unforgettable.

Most fiction about writers feels thin and self-regarding, but Wolff's passionate account of a youth coming into his own as a literary artist defies the rule. At the beloved boarding school his narrator attends, literature holds a lofty spot. Each term a famous author comes to speak to the students and meet with the winner of a writing contest. In succession, the narrator encounters the examples of Robert Frost, Ayn Rand and Ernest Hemingway, and his transit through the stages of abject hero-worship, callow self-confidence and a true understanding of the demands of his chosen craft is both funny and touching. This is the kind of novel that glides effortlessly into your heart, sets up housekeeping and winds up telling you far more about life and yourself than a book that's so easy to read has any right to.

"Property"
By Valerie Martin
Nan A. Talese/Doubleday
Order from Powells.com

Chill and pointed as an icicle, Martin's slim novel is a riveting depiction of intelligent but thoughtless evil. Told from the point of view of an unhappy female slaveowner in the antebellum South, it is a book of few and exquisitely chosen words, each one of which resounds with a terrible meaning. Manon Gaudet loathes her boorish plantation owner husband, not least because he dotes on the halfwit son of his slave, Sarah, a boy who looks altogether too much like the master of the house. When rebellion and violence change the power dynamics at the big house and Sarah escapes, Manon has the opportunity to open her eyes and recognize the similarities between their plights. Like all too many, she chooses not to. Martin's courage in letting her anti-heroine remain unenlightened is what makes "Property" so daring, so riveting and so impressively tough.