The winner of MoveOn.org's "Bush in 30 Seconds" contest is a subtle ad with the power to sway even some of his defenders. Now the ad may be headed for the Super Bowl. 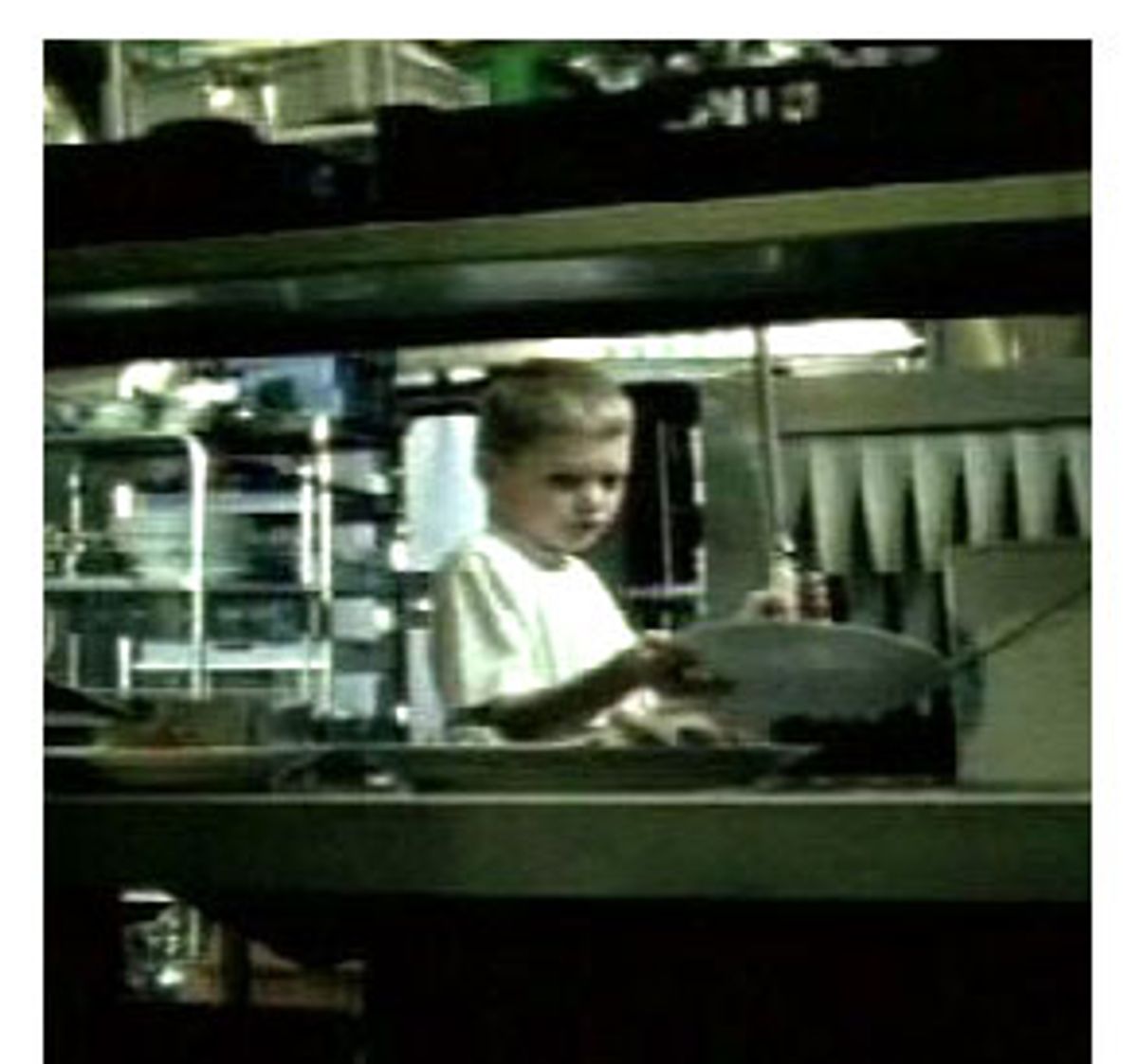 The winning spot in MoveOn's "Bush in 30 Seconds" ad contest didn't compare President George W. Bush to Hitler. It didn't even call him a liar, or castigate him for deceiving the nation into war. The commercial that triumphed over more than 1,000 other entries -- and that will run 30 times on CNN during the week of Bush's State of the Union address, and possibly during the Super Bowl as well -- was a subtle, elegiac and nearly wordless indictment of the burden Bush is shunting onto future generations with his deficits. It was made by Charlie Fisher, a 38-year-old advertising executive and father of two from Denver, a fiscal conservative who was a registered Republican until 1992.

Over a minor-key acoustic guitar tune, Fisher's "Child's Pay" spot shows a series of stoic, worn-looking American children laboring at low-wage adult jobs -- a boy washes dishes, a girl in a baggy pink maid's uniform cleans a hallway, another works in a factory. It ends with white words on a black screen: "Guess who's going to pay off President Bush's $1 trillion deficit?"

Actually, "Child's Pay" won twice. At a gala, celebrity-studded awards ceremony at Manhattan's Hammerstein ballroom on Monday, Fisher first received the People's Choice award for the ad most highly rated by MoveOn's members. Then he won the night's highest honor, being chosen from among 14 finalists by a panel that included pop star Moby, actor Jack Black and Democratic consultant James Carville.

The ad served as a somber culmination to a contest that has whipped the right into paroxysm of feigned indignation.

As Moby said from the stage, "Bush in 30 Seconds" was born when he and his friend Laura Dawn "were talking about our mutual contempt and loathing for George Bush, who's a big, fat, fucking liar. We thought, what can we do to get the creative community more involved?" He credited Dawn with the idea for the contest, which called on MoveOn members to submit homemade anti-Bush ads. Screening only for legal and decency issues, MoveOn posted 1,000 of the 1,500 entries received on the Web and invited members to vote on them, with a celebrity panel choosing a winner from among the top-rated spots.

The winner will be broadcast from Jan. 17-21, to coincide with the State of the Union address on Jan. 20. And as MoveOn campaigns director Eli Pariser announced on Monday, it may also become the first political ad ever to run during the Super Bowl -- there's space available and MoveOn can afford the $1.6 million price tag, though the deal isn't yet sealed.

Yet outrage, or at least a campaign-season facsimile of it, erupted when it emerged that two of the more than 1,000 entries that MoveOn posted compared Bush to Hitler, prompting a round of GOP fulminations and talk show bloviations. Republican National Committee chairman Ed Gillespie called the ads "[T]he worst and most vile form of political hate speech." CNN's Wolf Blitzer introduced a segment on the incident by calling it a "huge, huge controversy." The Drudge Report ran breathless headlines about each new development.

MoveOn apologized for the Hitler ads, but slammed Republicans for hypocrisy. Founder Wes Boyd issued a statement saying, "We agree that the two ads in question were in poor taste and deeply regret that they slipped through our screening process. In the future, if we publish or broadcast raw material, we will create a more effective filtering system. Contrast this with the behavior of the RNC and its allies when supporters of President Bush used TV ads morphing the face of Sen. Max Cleland (D-GA) into that of Osama Bin Laden during the 2002 Senate race. MoveOn.org and the MoveOn.org Voter Fund exist to bring the public into the political process and produce a more fact-based election process. We regret that the RNC doesn't seem to embrace the same goals."

But it may turn out that RNC hysteria only helped MoveOn. Monday's awards show, packed with more than 2,000 MoveOn members who paid $35 each to attend, crackled with genuine drama and was swarmed with reporters, even if some of them fought their way into press gaggles to ask questions like, "Is it really fair to compare Bush to Hitler?"

Of course, part of the reason that reporters from outlets such as People, Us Weekly and MTV showed up is because of all the celebrities in attendance -- presenters and performers included Julia Stiles, Janeane Garofalo, Rufus Wainwright, Moby, Chuck D, Al Franken and Michael Moore. The foreign press was out in force, too. When a French TV reporter introduced himself to Al Franken, who just returned from visiting troops in Afghanistan and Iraq, the comedian replied with real sincerity, "Thank you for your help in Afghanistan. I was just in Afghanistan. The commander there said the French paratroopers are the best he's ever seen."

In old-fashioned awards show style, the big winner wasn't announced until the end of the night. The show began with Living Colour guitarist Vernon Reid performing a Jimi Hendrix-style electric guitar version of the national anthem. Interspersed with stand-up comedy, music and wry commentary from host Garofalo were awards for best animated ad, best youth ad and funniest ad. The winning animated spot, "What I've Been Up To," features a cartoon Bush giving a rundown of his achievements. "For starters," he says, "I turned the strongest economy in history into the biggest deficit in history ... I invaded two countries, made a joke of the United Nations ... and still managed to take the most vacations of any president in history!"

The best youth ad was made by 29-year-old Jared Ewy, a Denver radio DJ and stand-up comic, and features Ewy ranting in black-and-white against a desolate landscape. His voice is outraged and incredulous as he riffs on Bush's misdeeds, "Bring it on? Our soldiers in a hotbed of hate and you say bring it on to people who accessorize with dynamite?"

Al Franken presented the awards for funniest ad to Christopher Fink, who made "If Parents Acted Like Bush," in which the father, "George," leaves his daughter behind when she needs a ride to school, barges in on her in the bathroom, charges a motorcycle to her and cheats on her mother ("I know it's not Mom, but it's OK! She's rich!").

In between were performances that ranged from sublime to mortifying. The evening's low point was a bizarre mock rap about healthcare by comedian Margaret Cho, who also did the night's opening monologue. Dressed in nurses scrubs, face covered by a surgical mask, she shouted, "Look me in the eye. You can't do it because you are dehydrated. You'd better do that shit, drink some water, fool," later imploring women in the audience to give themselves monthly breast exams. It was all a joke, but one that this reporter utterly failed to get.

Medical raps aside, there were far more lovely moments than awful ones on Monday, chief among them Rufus Wainwright's devastating cover of Leonard Cohen's "Hallelujah." The heartbroken exaltation of the lyrics drew out all the melancholy beneath the evening's celebration -- after all, progressives might be full of hope and energy, but many of them are also scared and weary. "Maybe there's a God above/ And all I ever learned from love/ Was how to shoot at someone who outdrew you, he crooned over his piano. And it's not a cry you can hear at night / It's not somebody who's seen the light / It's a cold and it's a broken Hallelujah.

Other artists also used covers to make political points (Moby told the crowd that he nurtured a secret dream of playing in a cover band). Chuck D did a cover of Sly and the Family Stone's "Stand," while Moby, announcing that he was singing from the point of view of Bush, performed Radiohead's "Creep." The passion he poured into the self-lacerating chorus, "But I'm a creep/ I'm a weirdo/ What the hell am I doing here?/ I don't belong here," almost suggested an oblique empathy for a man in way over his head.

It was the most sympathy Bush got all night. Pariser, whom Garofalo introduced as a "revolutionary and American hero," told the crowd, "President Bush has a problem with the truth. It's a simple problem. The truth is that Bush's policies are terrible for our country and the world." The truth, he told the cheering audience, is "the surest way into people's hearts ... even $200 million and the world's best spin machine can't beat that."

Many on Monday were convinced that the nation will soon awake to Bush's perfidy. Michael Moore extolled the organizing power of the Internet and told the crowd, "The people are on our side. The majority of the people support a progressive agenda."

Before the show Moore insisted, "The people do not support George Bush." He enjoys decent approval ratings in Middle America, Moore said, because people don't like to criticize the commander in chief when their sons and daughters are at war, "but that doesn't mean people like him or his policies."

If that's true, then progressives don't have much to worry about. Yet they are worried, and the anxiety encompasses their fellow citizens as well as their government. One ad finalist featured a man in bed pulling the cover over his eyes and hitting the snooze alarm every time his clock radio woke him with news of Bush's depredations. Ewy, winner of the best youth ad award, acknowledged that there was much enthusiastic support for Bush where he comes from, caused by "misunderstanding due to disinformation."

Given that, it's a relief that MoveOn's judges and members both chose "Child's Pay." It doesn't capture the anger and outrage of urbanites made to feel like exiles in their own country, and it doesn't attack Bush personally, no matter how richly earned such attacks may be. Its tone is one of deep disappointment and fear that tomorrow's Americans will find their options dramatically diminished. It seems like it could resonate even among people who think "sushi-eating" is an insult and Bush a decent man.