Like ripped sweat shirts and leg warmers, Donald Trump has never really left us. On "The Apprentice," fawning hopefuls happily enslave themselves to this icon of cheesy excess. 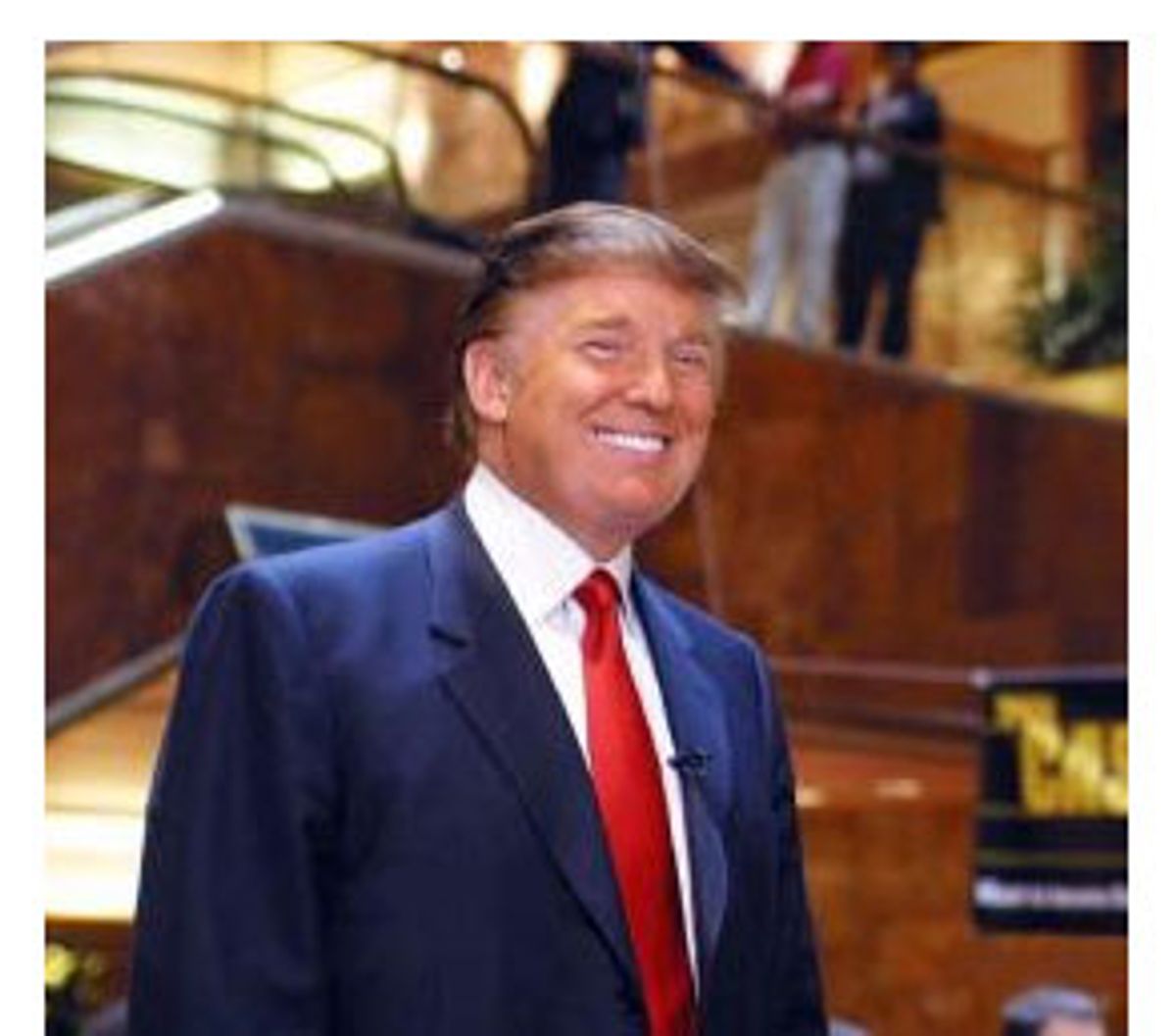 Some rich people make wealth look hopelessly appealing and delectable. Donald Trump is not one of those people. Instead of reflecting the glamour of incredible wealth, Trump has come to represent its attendant afflictions, which range from deadly sins to personality disorders: greed, vanity, obsessive-compulsive disorder, decadence, delusions of grandeur and germ phobia, to name just a few. No matter what trick "The Donald" has dreamed up to stay in the spotlight, his stubborn determination not to go away and not to change one iota is, oddly enough, what finally keeps him in our affections.

The blindingly beautiful supermodel on his arm, that thinning Kristy McNichol-style flip on the top of his head, those cartoonishly self-aggrandizing statements, somehow combine to form an immutable presence in American life as difficult to ignore as his flashy New York landmarks. Forget that he's been tooting the same tired horn for two decades now. Like a recurring character straight out of a Jane Austen novel, Trump fully inhabits his role as the unpardonably vain, tacky aristocrat whose thin charms do little to sugarcoat his fixation on his status and power among the privileged. Boorish as he might seem, we embrace him for making us feel like humble, down-to-earth Anne Elliots and Elizabeth Bennets by comparison.

Of course, while Austen had a knack for disassembling the tiresome habits of the preening elites, nothing raised her ire more than sycophants, flatterers and obsequious fawners, those who dedicate most of their energies to moving in the right circles and attracting the attention of those of rank and circumstance. Austen would've had a field day with the cloyingly ambitious contestants on "The Apprentice," a gaggle of hearty hand-shakers and earnestly dogmatic professionals selected to compete for the chance to work for Trump for a year. Since many of the group are already wealthy, it must be the glory and not the $250,000 salary that has them ready to cut each other's hearts out for Trump's approval. All the better, as far as the narrative is concerned.

When they're not falling all over themselves at the thought of all the power and fame and complimentary hand soaps that could be theirs, the contestants are murmuring self-help platitudes and management clichés at the camera without the slightest hint of irony. Thus, despite a somewhat shaky premise and a dorky start, "The Apprentice" has quickly established itself as a spectacle starring some of the most polished yet least self-aware characters to bask in pop culture's thin light since Austen's "Persuasion."

"Game's on! Game's been on for me since I showed up on the plane," proclaims Nick, a copier salesman.

"If you pull one over on me, I'm gonna 10-time you. I'm gonna do you over by 10 times. My mind works like that," says Bowie Hogg, an account executive at FedEx, apropos of nothing.

But where can the Donald exist, except in an irony-free zone, surrounded by salivating business puppies who lap up his every word? Here, the Donald is free to breeze in, drop some phat wisdom, and breeze out without having to stick around and chat about something other than himself.

Strangely, within the first few minutes of the show, a shadow of doubt falls on the sharpness of the assembled contestants. When the men and women are split up, they have to name their teams. After hours of jabbering, the women decide to call themselves "Protégé Corporation," which sounds eerily like the name a 7-year-old might give to the office where her Barbie works. The guys come up with "Versacorp," quickly proclaiming the bland and meaningless name a brilliant creation. "I wasn't a big proponent of that," Nick snips, distinguishing himself from his fellow yes men. "I don't think it's flashy, I don't think it represents all of us, and I don't think Trump will particularly love the name. I mean, Versacorp! It's dumb. It's corny!"

Cutely enough, the teams' first task is to sell lemonade on the streets of New York. The guys begin with a few smart decisions, borrowing equipment from a local bodega in exchange for sending business their way, while the women bicker and then panic because they can't find each other. Despite their inept start, some of the longer-legged women wise up and flirt their way into the wallets of passersby, charging $5 a cup for lemonade and a peck on the cheek while the men continue to scramble and beg for $1 cups across town. Kristi, a restaurant owner from Santa Monica, Calif., seems particularly good at buttering up young strangers. Perhaps she's drawing on her rumored soft-porn experience. Everyone brings special talents to the picnic on "The Apprentice."

The men's picnic turns out to be a flop. By the end of the day, Versacorp has netted a paltry $250, while the Barbie Dreamhouse is in full swing: $1,200 of lemonade and sexual favors wins them the competition. Thus, the girls win a trip to the Donald's personal pad while the men will lose a team member. Sam, the Internet media guru from D.C., is openly jealous. "I want access to Trump. I want to get to know that guy!" he blurts at the camera.

As it turns out, the Donald lives in a hideous, gold-encrusted cavern that resembles the lobby of a hopelessly tacky Las Vegas casino. The girls oooh and aaah over the delicious excess of the setting, of course, and blurt at the Donald's spectacularly beautiful in-house supermodel, "You're very, very lucky." "He is not lucky?" she responds, and you have to admit, Kristy McNichol should really thank his lucky stars.

Then Trump himself saunters in, and the girls squeal and giggle in delight.

Trump: Hello, everybody! Congratulations. So look, if you're really successful, you'll all live just like this.

Contestant: We can only wish!

Trump: Maybe not like this. Or maybe even better. But if you're really successful, this is what it is. And it's fun.

Trump: [to camera] I show this apartment to very few people. Presidents. Kings.

Trump: Let me give you a little tour.

Trump: [to camera] And they walk in, they look around, and they really can't believe what they're seeing. They just feel it's amazing.

Trump: And if we watch over here...

Close-up on an awful gold-encrusted fountain.

Kristi: [to camera] We got to see a different side of him, a more personable side. He was having a lot more fun. He gave us some advice. He said, work hard and have fun. And I really, truly believe that that's how he runs his life.

Tammy: [gazing up at a chandelier] Oh my gosh, this is so rich! This is really, like, rich!

If watching these future business leaders of America drool all over the marble floors isn't enough to get you liquidating those small-cap growth funds, witnessing the macho buffoonery of the threatened Versacorp competitors should do the trick. The men are full of jittery arrogance in "The Boardroom" (think Tribal Council), where they're forced to consult with the Donald on which head should roll. They narrow it down to Troy, who was the leader of their lemonade catastrophe; Sam, who spent 20 minutes trying to sell a cup of lemonade to a rich guy for $1,000; and David, an M.D./MBA hybrid whose main crime seems to be that he's too educated to interact naturally with other humans.

Trump dismisses from the meeting everyone but Sam, Troy and David, who spend some awkward moments waiting for Trump's decision in the next room. Sam is feeling desperate, so he sets about demonstrating the curious side effects of severe narcissism, trotting out his delusions of grandeur for the bemusement of the other two.

While Sam is tragic and pathetic in his own way, his outburst mostly hints that he's at least a little sharper than the other two. This is television, after all, and anyone who's willing to embody gritty determination in a demented, melodramatic way is sure to stick around for a while. Most of all, Sam is signaling that he belongs in the club. After all, plenty of America's wealthiest businessmen are narcissists and delusional jackasses, and Sam may be exactly the flavor of freak show that makes it in this crazy, mixed-up world. Sensing this, Trump sends nerdy David home instead, and Sam and Troy make a big show of shaking hands before returning to celebrate with their fellow panderers.

Who will win it all? If the first episode is any indication, the winner will be the contestant who carves out the most mesmerizing narrative for him- or herself, presenting an over-the-top character with a riveting mix of charms and flaws, one who seems to overcome adversity through sheer force of will, attracting as many detractors as fans along the way. The winner, in other words, will be a mirror image of Trump. Who could the Donald possibly respect more?