Bush loses his aura of invincibility

In his State of the Union address, the president posed once again as the indomitable wartime leader -- but it didn't play as well this time. 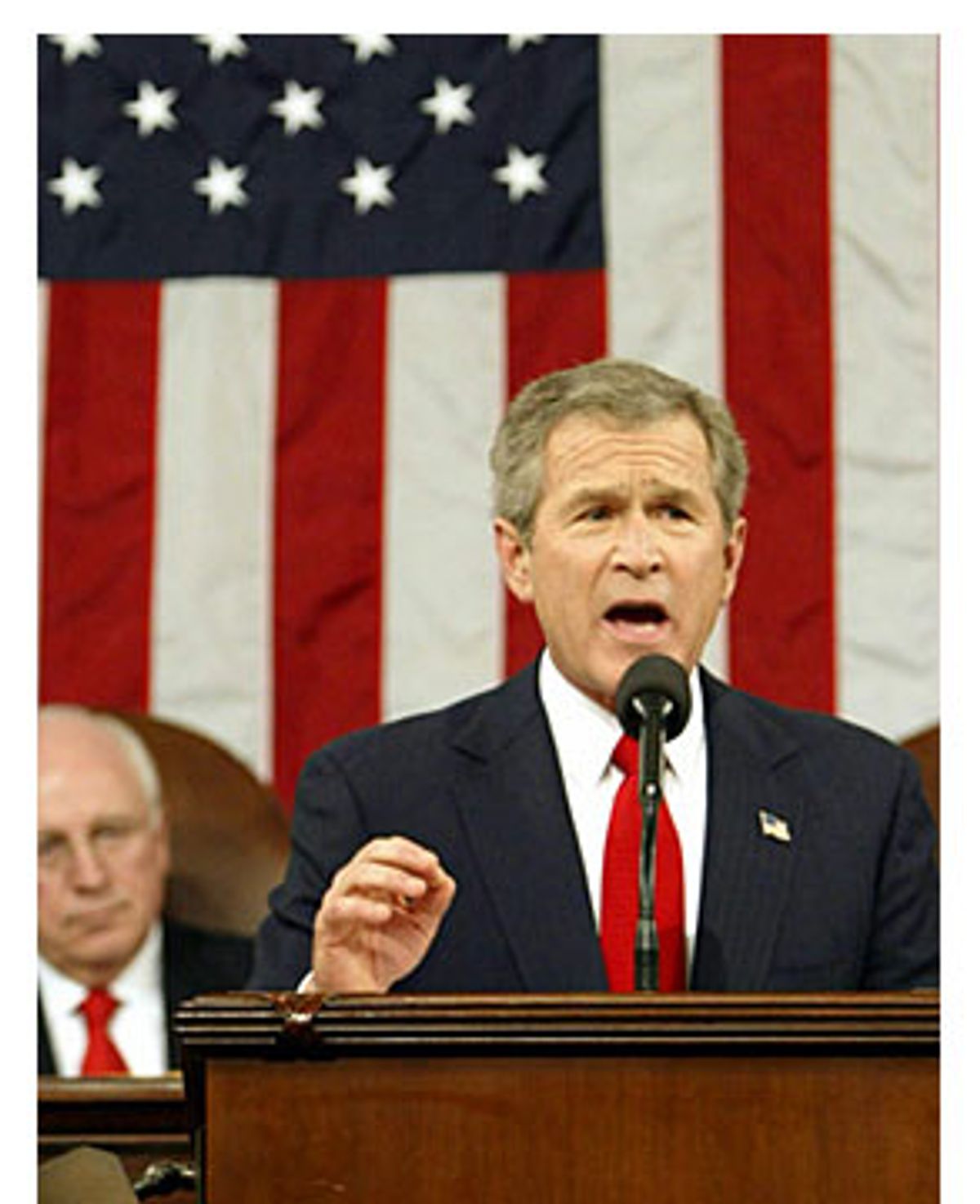 As they prepared for Tuesday night's State of the Union speech, President Bush, Karl Rove and Bush's speechwriters were faced with a choice. The latest poll showed that Americans still supported Bush on national security and the war on Iraq, but were increasingly worried about his economic policies. Which way should they play it?

The war-leader card was Bush's only proven winner: Keeping Americans in a state of more or less permanent fear, and more or less permanent war, had bailed out what looked until 9/11 like a presidency headed for disaster. As long as he was sending American troops off to fight evildoers somewhere, Bush -- who before the terror attacks came across as a sharp-elbowed, ill-educated frat boy whose sole mission in life was to roll over for corporate America -- suddenly morphed into a kind of combo pack of FDR and Churchill.

So there was a strong argument to keep banging the national security drum. On the other hand, if people really were less worried about terrorism than their next paycheck, or their nonexistent health insurance, the national security theme, no matter how many inspiringly patriotic applause lines his speechwriters could work into it, might suffer the fate of Howard Dean's throat after he emitted that weird post-Iowa rebel yell. And Bush and Rove knew they needed to capture a key swing vote: Americans who support Bush's shoot-first-ask-questions-later approach to national defense but are deeply uneasy about his handling of the economy. They knew that merely swaggering around in a flight suit was not enough this time, that the guns needed to be lubed up with a few sticks of butter. But should guns come first, or butter?

In fact, it was a no-brainer. Following the venerable football philosophy that you dance with the one that brung you, Team Bush decided to keep the focus on the war on terror -- and keep the terror alert coded red. To be sure, in his speech Bush dutifully went down the domestic laundry list: everything from No Child Left Behind to his new immigration proposal to retirement savings accounts to an appeal to Congress to make his massive tax cuts permanent. (The latter drew, if not quite the raucous heckling of opposition members in the British Parliament, audible grumblings from Democrats.)

But the whole domestic part of Bush's speech had an oddly perfunctory quality about it, as if the GOP strategists had realized that they had to offer something on these subjects to counter the Democrats but couldn't muster any real enthusiasm except for their eternal hobbyhorse, cutting taxes. There was no soaring, uniting rhetoric, no overarching themes (except for the repeated invocations of the Almighty, which play well with Bush's evangelical base but sit very uneasily with this Jeffersonian agnostic) and little evidence of the "compassionate conservatism" that Bush the Younger was supposed to bring to the White House.

The one notable exception came, ironically, in a brief coda to Bush's intolerant comments about the "sanctity of marriage," which warned that the American people might answer "activist judges" who recognized gay marriages with a constitutional amendment. Bush followed this expected sop to his right-wing base (and opening salvo in a crucial campaign issue) by saying, "The outcome of this debate is important -- and so is the way we conduct it. The same moral tradition that defines marriage also teaches that each individual has dignity and value in God's sight."

Perhaps it's just that we've become so accustomed to performances featuring Bush the Avenging Angel, Scourge of the Taliban and Smiter of Saddam, that seeing him talking about upgrading the electrical grid (a topic that seemed to be introduced solely so that he could get off the line "and reduce America's dependence on foreign oil") feels weirdly anticlimactic. Or it may be that the GOP already attained political nirvana when the massive, irresponsible tax cuts were rammed through (with the connivance of invertebrate Dems) and they really had nothing left to say or do. Or that the Bush administration was listening to the increasingly ominous economic rumblings coming now even from Republican insiders, warning that the $500 billion deficit Bush created by his outrageous tax cuts could not be sustained -- or that Washington Post/ABC poll showing that 58 percent of Americans believe that the economy is the biggest problem facing the country (compared to 39 percent who named terrorism) and that 50 percent of Americans would prefer Democrats in Congress to handle the economy, compared to 43 percent who would prefer Bush. In any case, there was no real story line in Bush's address beyond "cut taxes" and "kill evildoers," and his delivery was not inspiring.

The problem lies not with the delivery but with the policy. The trouble with espousing a radical redistribution of wealth in which the rich get richer and the poor and middle class gets shafted (that $100 or $300 or even $800 tax break is nothing compared to the long-term damage done to the economy and the government services, at all levels, that are beginning to be shut off like a spigot) is that you can't really admit what your agenda is. ("My fellow Americans, let us embrace the ideas of anti-tax zealot Grover Norquist, and return our great nation to its most prosperous time -- the McKinley era!") You are also forced to tell fairy tales, like the absurd claim that under his new budget Bush would halve the deficit in five years, or the baldfaced lie that "jobs are on the rise" when 2.5 million jobs have been lost in the past two years. In any case, on domestic matters Bush looked and sounded far from invincible.

That may not sound like much, but not looking invincible is a major problem for Bush, who has relied on intimidation and a certain media-abetted aura of inevitability to cover up his manifest weaknesses. That aura is dissipating: A CNN poll taken immediately after the speech showed that only 45 percent of viewers approved of it, compared to 52 percent after Bill Clinton's State of the Union address delivered in the heat of the Monica Lewinsky scandal.

Above all, a funny thing happened to Bush's hitherto-reliable national security card: It didn't work. It's all about timing: After 9/11, and before we invaded Iraq, fear and war played like gangbusters. But the fear/war/destroy-evil drug just doesn't have the same kick it did just before the exciting, televised whupping of Iraq.

Couple all that with the new dynamism in the Democratic race, and Karl Rove has many things to worry about.

Bush opened his speech by invoking the war on terror, and claiming that it was a rousing success. "America this evening is a nation called to great responsibilities. And we are rising to meet them. As we gather tonight, hundreds of thousands of American servicemen and women are deployed across the world in the war on terror. By bringing hope to the oppressed, and delivering justice to the violent, they are making America more secure." After a detour to claim that "the tax relief you passed is working," Bush fired a crude shot at critics of the Iraq war -- including, of course, his Democratic challengers: "We have faced serious challenges together -- and now we face a choice. We can go forward with confidence and resolve -- or we can turn back to the dangerous illusion that terrorists are not plotting and outlaw regimes are no threat to us."

This flag-waving caricature of antiwar positions has worked well for Bush and the GOP in the past, but without the buttress of Bush's now-discredited claims about Saddam's WMD, it felt egregiously empty. When historians 100 years from now examine Bush's speech, the one thing they are certain to note is that Bush completely ducked the WMD issue -- exaggerating the meager findings of inspector David Kay and, incredibly, not even bringing up the obviously cooked intelligence that provided the justification for war. In the aftermath of a war -- a war! -- this politically motivated failure to even acknowledge that the entire rationale for that conflict was specious is unconscionable, and unforgivable. Instead, Bush engaged in mere empty bluster. "America will never seek a permission slip to defend the security of our country," he proclaimed, throwing a wild, below-the-belt roundhouse at critics who argued that the U.S. should have lined up a genuinely multilateral coalition.

All of this is in keeping with the never-apologize, never-explain arrogance of his administration -- an arrogance that has worked well for it until now. But with Iraq turning into a war of attrition, with its political future increasingly ominous and no clear exit strategy in sight, that arrogance is beginning to look increasingly like a veneer painted over a void.

To be sure, one should not engage in wishful thinking and exaggerate the difficulties Bush faces on this issue. The national security issue is still Bush's strong suit politically. The same Washington Post/ABC poll showed that Americans favor his handling of the war on terror over the Democrats' by two to one, with the ratio almost as high for the war on Iraq. It is not surprising that Bush has done best when he struts the national quarterdeck in Ahab-like finery.

And so, Bush spoke in rhetoric that recalled Churchill, inviting Americans to join the president in the flattering fantasy that the nation had gone through a sort of Battle of Britain-like ordeal in the past two-plus years. "We have not come all this way -- through tragedy, and trial, and war -- only to falter and leave our work unfinished. Americans are rising to the tasks of history."

The blood, sweat and tears rhetoric sounds good, but it's strictly for show. It wouldn't be appropriate for the president to say, "My fellow Americans, I'm gonna hand this friggin' time bomb off to Kofi this summer and head for my hammock in Crawford faster than you can say 'failed state.'" But Bush can take comfort in the fact that even if the "tasks of history" -- in this case, preventing Iraq from fracturing along ethnic and religious lines and descending into a terrorist-friendly chaos -- prove too much for the world's only superpower, it may not prevent him from being reelected: He can simply declare victory and go home. It's like the old tree-falling-on-the-moon philosophical conundrum, as told by noted radical solipsist Karl Rove: If there's a bloodbath in Iraq and the U.S. media isn't there, it never happened!

Judging by the polls, most Americans don't care that the rationale for invading Iraq has collapsed, and that the situation there is increasingly perilous. Perhaps this is because they continue to believe that Saddam Hussein and Osama bin Laden (whose name Bush tactfully omitted to mention during his 54-minute speech) are the same person. To keep them in this politically useful state, Bush and the GOP have changed their story: Now they're emphasizing a high-flown Wilsonian idealism, emphasizing freeing the Iraqi people from tyranny. There is, of course, no question that freeing the Iraqi people from Saddam's rule was a good thing. But the discussion of a war waged under false premises should not, must not, stop there. Bush must be forced to address the real issues arising from this war, not just wave the flag and beat up on straw men.

In the months ahead, there is going to be a titanic collision -- not just between political parties but between worldviews. Understandably, Americans do not want to believe that their leaders lied to them, or that a war they have sent their sons and daughters off to fight may have been unnecessary. But savage and wounding as that national debate will be, it must take place, or the United States may end up as bitterly divided as the nation it defeated and cannot yet mend.