"Win a Date With Tad Hamilton!"

Tad may be dreamy, but there's little to swoon over in this too-gentle -- and alarmingly chaste -- teen-crush movie. 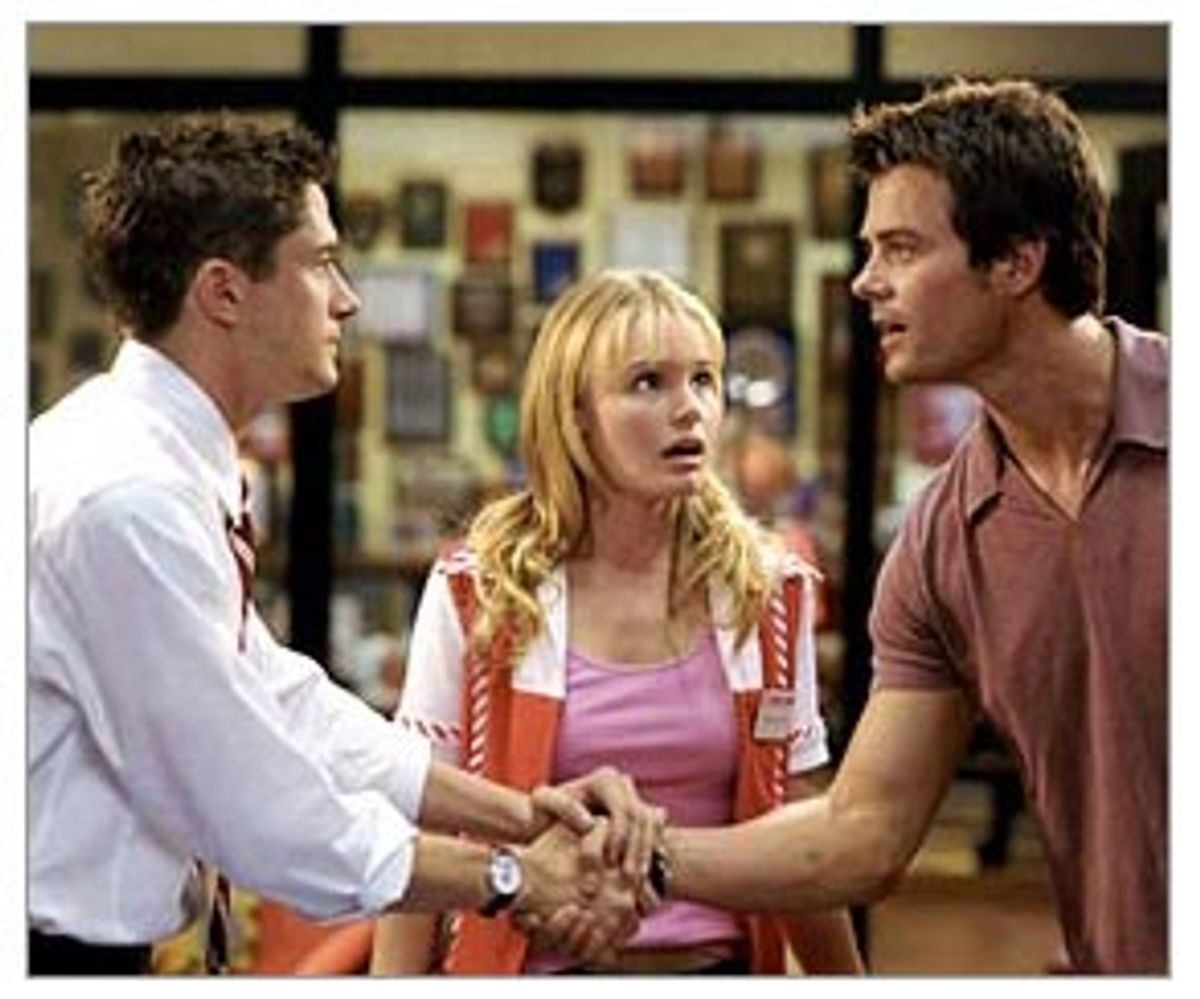 The premise of the teen comedy "Win a Date with Tad Hamilton!" will resonate immediately with anyone who ever set aside precious allowance money for Tiger Beat magazine. ("If only Davy Jones would take me for his bride, I'm sure we'd be happy 4-ever!") Two 20-ish best friends, Rosalee (Kate Bosworth) and Cathy (Ginnifer Goodwin), are rattling around their small West Virginia town, working at the Piggly-Wiggly by day and swooning over movie idol Tad Hamilton (Josh Duhamel) by night. Their pal Pete (Topher Grace) -- he's also their boss at the store, though he has plans to head off to college -- doesn't understand what they see in Hamilton. But then, he's long been in love with Rosalee himself and simply doesn't have the guts to say it.

When Rosalee wins the contest referred to in the movie's title, she's whisked out to Los Angeles for her night out with the star. When we first meet him, he's buff and stuck-up in equal measure. But Rosalee softens him, and he realizes he's falling for her. The ensuing complications in "Tad Hamilton!" pile up gently -- so gently, in fact, that they practically slide off the screen. Director Robert Luketic ("Legally Blonde") strings his scenes along with extra slackness -- they're like wobbly beads on a too-long stretch of cord.

"Tad Hamilton!" suffers from a lack of conviction: Despite the fact that there's barely an authority figure in sight (chaperones, anybody?), any potential raciness has been toned down to a barely audible roar. (Tad eventually puts the moves on Rosalee, but the pair remain remarkably, unbelievably, chaste.) The characters sometimes do things that make little or no sense. And some of them barely get a chance to breathe in the first place: The sympathetic bartender played by Kathryn Hahn seems to exist only because someone (perhaps the screenwriter, Victor Levin) decided that a sympathetic bartender ought to be tossed into the mix somehow.

All that said, though, you have to give "Win a Date with Tad Hamilton!" at least a bit of credit for refusing to be raucous and noisy and thunderingly obvious. Luketic is riffing on a nostalgia vibe here: The girls' love for Tad Hamilton is more like the gentle crush of a '40s teenager than that of a 21st-century one, and Luketic recognizes that. As the girls swoon and sigh over the on-screen Hamilton, they wonder aloud if he's as nice as the characters he plays and decide that, surely, he must be. They wonder what he's doing right at that moment. "I'll bet he's in church," Rosalee says dreamily, and then we get a quick cut to Tad speeding recklessly down a California road with a hot babe at his side.

Meanwhile, nice-guy Pete curls up at home with his dog (who has fetchingly pointed ears) and a book of Flannery O'Connor short stories. (When was the last time you saw anyone reading Flannery O'Connor in a mainstream teen movie?) The leads and their second bananas are all charming enough, particularly Goodwin (who was lovely as the allegedly "chubby" girl in "Mona Lisa Smile"). Nathan Lane shows up, with his apostrophe eyebrows, as Tad's amusingly meddlesome agent. Gary Cole plays Rosalee's hip dad, who calls out to Tad jovially as he and Rosalee head out the door for a date, "Have her back by dawn -- and no cocaine!"

There are enough off-kilter touches in "Win a Date with Tad Hamilton!" that it's a pity the movie couldn't have been better. In my favorite sequence, Rosalee gets her first taste of California as she rides down the streets of Los Angeles in a limo. We see a dazzling blond hitchhiker in a bikini (she's holding a sign that reads "I left my clothes in San Francisco"), a dog strapped into a child's car seat and a couple of kids huddled behind a lemonade stand (the product is priced at $9 a glass). There's a gentle obviousness to these sight gags -- they're light and silly and they breeze by on a giggle, but somehow they stick with you. If only the movie around them weren't such an indistinct blur.