ImClone's Sam Waksal hawked his cancer drug at the intersection of Big Pharma and Wall Street. A new book tallies the cost of his deceit. 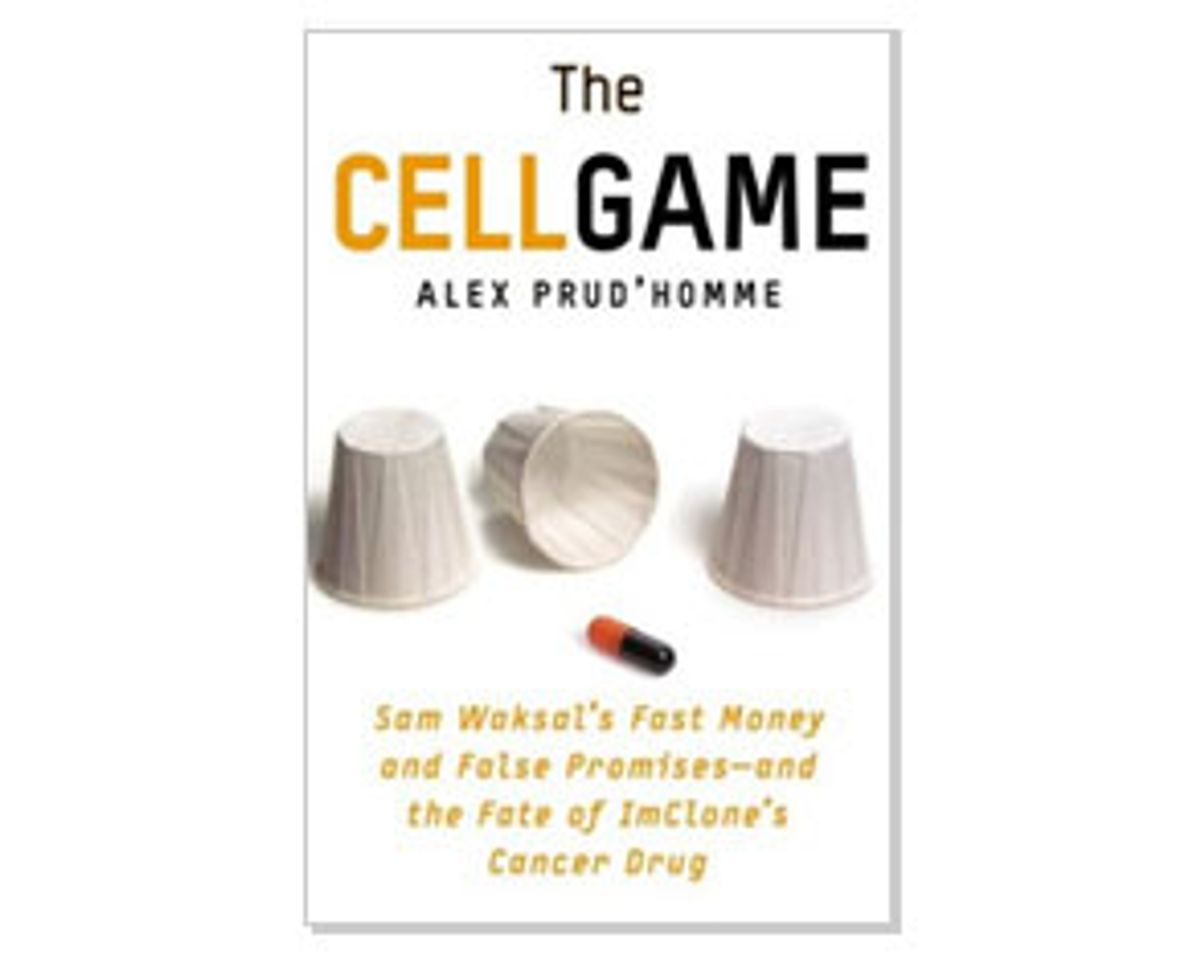 The more one learns about Sam Waksal, the CEO and founder of the biotech startup ImClone, the more he appears to be a caricature. His behavior is simply too irresponsible, too scoundrelly, to be believable. At one point in "The Cell Game," author Alex Prud'homme informs us that "Throughout the 1990s, [Waksal] faced a long list of lawsuits, tax liens, and judgments brought against him from friends, charities, contractors, realtors, hotels, consulting firms, account trustees, businesses, and tax authorities."

He appears to have been kicked out of every lab he ever worked in, yet somehow managed to turn around and raise $4 million to start a company. He forged signatures of his own family members and company executives. With wanton abandon he misrepresented himself, his company, and the clinical trials aimed at proving the efficacy of the cancer drug Erbitux. He was, despite his apparent charm and contagious vivacity, an awful, awful executive. That he could get away with his shenanigans for so long without being called to account isn't just infuriating but also smacks of immorality.

After the rash of corporate scandals that have gotten this millennium off to such a nifty start, those might seem like strong words. Wall Street and the rest of corporate America have no shortage of scoundrels. But ImClone was in the business of fighting cancer, and that adds a special air of reprehensibility to the whole sorry tale. If Waksal had spent more time tending to his business, listening and responding to the demands of the Food and Drug Administration, and living up to his avowals of wanting to make the world a better place, people who are dead now might still be living, or at the least, might have lived a little longer.

In "The Cell Game," clunkily subtitled "Sam Waksal's Fast Money and False Promises -- and the Fate of ImClone's Cancer Drug," Prud'homme hammers this point home in unsubtle fashion, interleaving his accounts of Waksal's problems with short sketches of cancer victims desperate for the "miracle drug" ImClone was supposedly bringing to market. Some get an opportunity to try the drug, Erbitux, as part of clinical trials, and experience dramatic reductions in their life-threatening tumors. Others don't, and die. This is not to say that Erbitux actually is a cure for the kinds of colorectal and head-and-neck cancer at which it was targeted -- by the end of the book, one still isn't sure what the data proves. But it illustrates the gravity of what was at stake while Waksal ran amok.

And those stakes are the real story of "The Cell Game," an interesting, if hastily written, account of Waksal's rise and fall. The intersection of big medicine, big business and big government in the war against cancer is a hugely complicated mess. It's a story about how the government regulates the introduction of new drugs, and how the free market strives to provide them -- a story that involves scientists and doctors whose highest goals are extending human life and fighting a horrible disease, and corporate executives who ache to rake in the profits that can accrue to whichever company brings out the right drug at the right time.

"The Cell Game" is an intriguing look into a fascinating world, but it occasionally loses sight of what's important. Most critically, the book could have done without a lengthy rehashing of the already well-told tale of Martha Stewart. Stewart is on trial in New York this week, facing a raft of charges all having to do with her precipitous sale of ImClone stock right before the FDA publicly announced it was rejecting ImClone's application for "fast track" approval of Erbitux. "The Cell Game" is clearly being rushed to bookstores now to take advantage of the Stewart publicity, and as a result, Prud'homme's prose was not edited with the care that a topic as important as this deserves. There's a lot of unnecessary repetition and some embarrassing spelling errors (for instance, "reigned" instead of "reined").

And Stewart is really nothing but a sideshow, a celebrity being made an example of by prosecutors for an injudicious bit of insider trading that is immaterial to the deeper issues at the heart of "The Cell Game." By spending too much time focusing on her, Prud'homme distracts himself from probing deeply enough into the question of whether the current system for bringing new drugs to market best serves the interests of cancer patients. Are there ways to do it better? Should we be trusting Big Pharma and the stock market to cure our bodily ills? Or are we stuck, trapped by the immense costs involved in creating new drugs, costs that may be beyond the scope of even the biggest government to bear?

These are tough questions. The problems of what is medically or morally appropriate get caught all too easily in the morass of political and economic realities. As Prud'homme shows, the FDA, blamed both by patients and conservative ideologues for slowing the introduction of new drugs and interfering with the workings of the market, is at the nexus of all these questions. People who have been told they have three months to live have very little patience with requirements for rigorous clinical trials: They want their drugs now. Conservative politicians, always looking for an opportunity to bash government bureaucracy, are happy to co-opt the victims' pain in the service of a political agenda.

But if there is anything that "The Cell Game" can tell us, it is the critical importance of having strong regulatory watchdogs. With nuts like Waksal running around, able to raise millions of dollars and bamboozle top scientists, bankers and supposedly savvy big pharmaceutical executives, it's clear that one can't trust the industry to police itself. The rush to get newer, better drugs to the patient is hard for anyone to resist, but the financial rewards for the company that wins the race are so great that the temptation to cut corners, with the attendant risks that holds for human lives, can be overwhelming.

What makes the story of ImClone, Waksal and Erbitux all the more poignant is the undeniable fact that newer, better drugs are constantly coming on the market -- that medical science allied with Big Pharma is capable of miraculous things. It is no pipe dream to believe that a treatment just around the corner will work wonders.

Certainly, it's sobering to learn, from Prud'homme's account, that a successful cancer drug, as measured by a clinical trial, may mean extending the life of a patient by only a few months perhaps 15-20 percent of the time. Even those patients highlighted by Prud'homme as having had good results with Erbitux died not too long after treatment.

Still, the reason everyone at ImClone was in such a big hurry was that if they missed their window of opportunity, other companies, with better, stronger, newer drugs would get there before them. Science is marching on; the war against cancer is proceeding apace. The last 50 years have seen astonishing progress in understanding how the human body works and how cancer attacks our cells. If only we could say we have learned as much during that same time about how to make the marketplace serve humanity, rather than greed.