The matchup of great defenses and no-name offenses won't make New England vs. Carolina a snooze. In fact, Patriots fans will probably be calling for Valium before their team pulls it out. 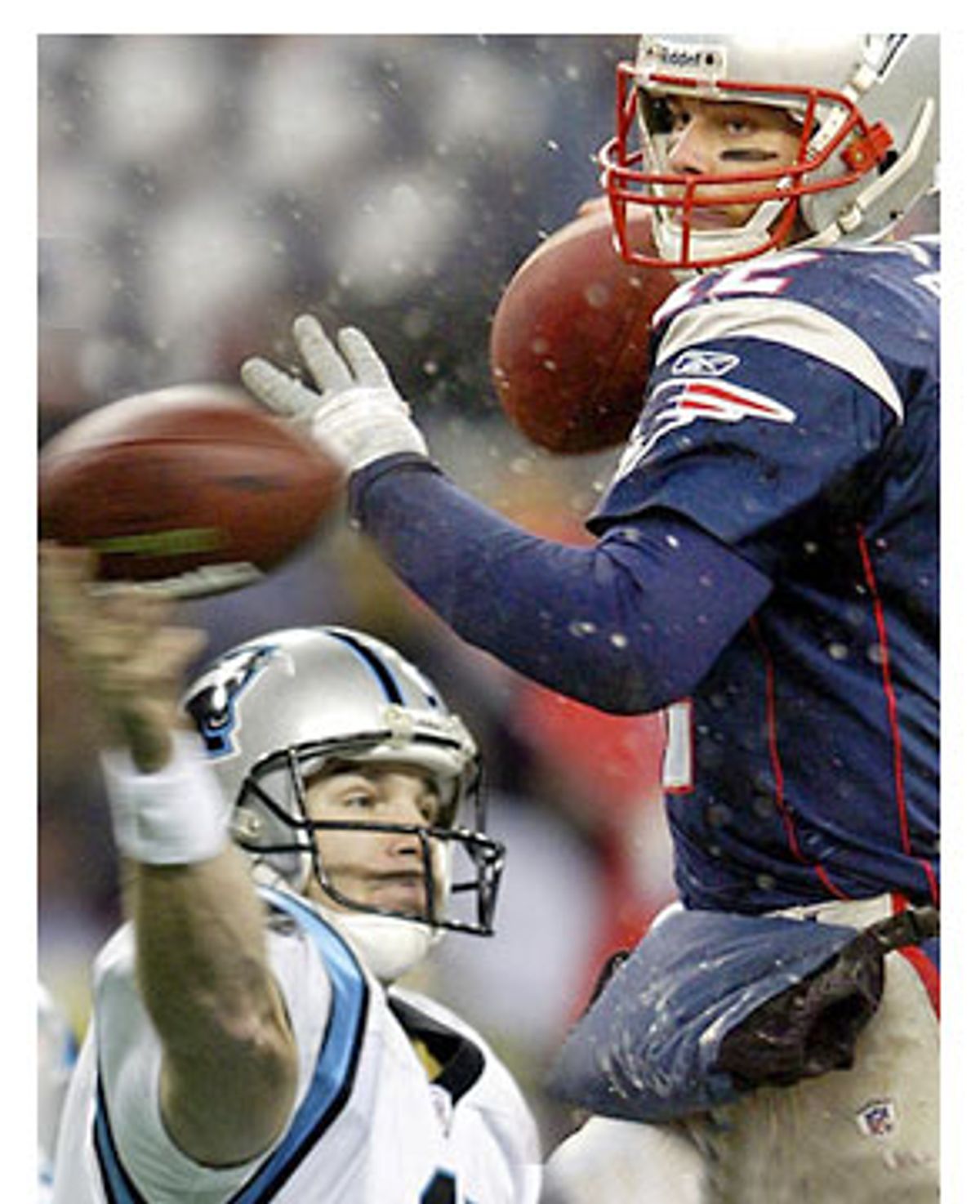 Hollywood makes corny movies out of great stories, and if anyone ever makes a movie out of this year's Carolina Panthers, it's going to be worse than "Rudy."

Two years ago the Panthers, under two-time Super Bowl-winning coach George Seifert, won their opening game, then preposterously lost 15 in a row. I think you can picture the montage o' futility under the opening credits, culminating in that 15th loss, a 38-6 drubbing at the hands of the New England Patriots, the eventual Super Bowl champions.

Now we're at the Big Game that always serves as the climax for these flicks, in this case Super Bowl XXXVIII, kicking off Sunday at 6:25 p.m. EST in Houston. The Panthers, under no-nonsense coach John Fox, struggled to a respectable 7-9 last year, despite an eight-game losing streak at midseason. And now this year they've come out of nowhere to go 11-5 and then shake up the world by winning the NFC championship. Ever doubted by the experts, they rode a stout defense, a bruising running game and an unknown quarterback to victory in close game after close game during the season, then three playoff games, including upsets over the Rams and Eagles on the road.

All for the privilege of being underdogs again, by a touchdown against a juggernaut from the AFC, a team that's won 14 straight games, the longest in-season streak in NFL history other than that of the untouchable, undefeated 1972 Miami Dolphins. A team coached by a man widely regarded around the league as a genius.

Who else could it be but those same New England Patriots, the villain of the piece?

Fortunately, we're not in the third reel of a tear-jerker, and the story's a little more complicated. The Patriots, despite that championship two years ago, when they were the Cinderella story, aren't exactly the too rich, too successful glamour boys you might expect looking at their 14-2 record and two playoff victories. They too win with defense, a hard-hitting group that has taken the brilliant scheming of coach Bill Belichick and turned in the stingiest performance in the league this year. Patriots opponents score less than 15 points a game.

New England combines that with just enough offense to be the best team in the league. Sound familiar? It should. It's more or less the formula used by the last three Super Bowl champions -- the 2000 Baltimore Ravens, 2001 Patriots and 2002 Tampa Bay Buccaneers -- and it'll be the formula this year no matter who wins.

The closest thing the Pats have to a marquee star is their handsome and charismatic quarterback, Tom Brady, who was a guest of the president at the State of the Union address and is already, at 26, a proven winner, with a Super Bowl ring and a 5-0 lifetime record in the playoffs, plus a 7-0 mark in overtime games. But while Brady has the respect of his teammates and does a fine job running New England's short-passing offense, he's a middle-of-the-pack type quarterback who doesn't put up gaudy numbers or make eye-popping plays.

Not unlike Jake Delhomme, the quarterback of the Panthers, who's filling the role Brady played two years ago: the obscure quarterback who improbably leads his team to the promised land. Brady wasn't even a full-time starter in college at Michigan, where he split time as a senior with Drew Henson, and he was drafted by the Patriots in the sixth round (out of seven). He stepped in when glamorous star Drew Bledsoe was hurt early in 2001, turned the stumbling team around, and eventually won the job outright, Bledsoe moving on as a free agent to Buffalo.

Delhomme, 29, comes from even more humble beginnings. He was a starter in college, even a record-setting passer, but that was at Louisiana-Lafayette. NFL scouts were so impressed they didn't even invite him to the scouting combine. He went undrafted and bounced around a bit, getting waived three times and doing a two-year hitch in NFL Europe -- one as a backup -- before signing with Carolina this year. As a backup. He began the season behind Rodney Peete, a 37-year-old journeyman who was never much more than a second-stringer himself even in his prime.

It will help for purposes of the corny Panthers movie, by the way, that Peete is married to a B-list actress. The good news for Holly Robinson Peete is that she'll get the gig playing herself. The bad news is she's going to have to be kind of bitchy, the better to play against Delhomme's aw-shucks Cajun charm.

It's a measure of these two blue-collar teams that the only skill player on either side who's going to the Pro Bowl this year is Stephen Davis, the Panthers' rugged between-the-tackles running back who averaged 103 yards rushing per game in the regular season. Each team is sending three players to the Pro Bowl. Of the five teams the Panthers and Patriots have sent home in the playoffs, only the Eagles -- also with three -- failed to send more men to the all-star game.

All of which has led to a little bit of grumbling that this will be a dull Super Bowl, a no-name affair that will be fought and won in the trenches. A return to the days of three yards and a cloud of retractable-roof-protected Bermuda grass. But it actually promises to be a pretty good tussle. Both teams have waves of playmakers on defense, for one thing. The heroes of both conference championship games were defensive backs, Ty Law of the Patriots and Ricky Manning Jr. of the Panthers, who intercepted three passes apiece.

For another, they've both made a habit of playing close, exciting games. And winning them.

The Patriots are as dominant as you'd expect a 16-2 team to be -- but only when they're playing at home, where they had three shutouts this year and didn't allow a touchdown for four full games at midseason. The Pats held opponents under 10 points a game at Gillette Stadium, but when they ventured away from Foxboro -- something they've done only once since Thanksgiving weekend -- the Patriots played almost nothing but close games.

After opening their season with a flukey, one-of-those-days 31-0 drubbing in Buffalo and a 31-10 win in Philadelphia, the Patriots played six more road games, winning five of them. All were decided by less than a touchdown, and the average final score was 25-22, Patriots.

But it's the Panthers who are the real cardiac kids of the NFL. "We may be boring, but 14 out of our 16 [regular season] games ended on the last drive or the last play," kicker John Kasay has said. "There have been a lot of people that had heart problems in the Carolinas over the last four months." Seven of Carolina's 11 regular-season wins were by three points or less, tying an NFL record.

They won three overtime games during the season and a double-overtime marathon over the Rams in the playoffs, all on the road. They beat the defending champion Buccaneers by blocking an extra point that would have been the game winner. But don't get the idea that the Panthers are living on borrowed time. In the playoffs, they've thumped the Cowboys and Eagles, and they clearly outplayed the Rams before St. Louis rallied furiously in the final minutes of regulation to force overtime. The way they've played in January, the Panthers are no Cinderella. If they're not the best team in football, they're the second best.

That's what will be decided in Houston. The Panthers, whose strength is their offensive and defensive lines, will try to establish the run with Davis and his backup, the shiftier DeShaun Foster, and then take shots with long passes downfield to Steve Smith or Muhsin Muhammad. They'll use their talented defensive front to try to pressure Brady and throw off the rhythm of the Patriots' short-dump passing attack, which is easier said than done. But mostly they'll try to stay close, figuring that if they can put the ball in Delhomme's hands with the game on the line, he'll find a way to make good things happen. He's been doing it all year.

The Patriots, who don't have a top-flight running back, will use their short passing game the way the Panthers use the running game, to control the ball and the clock. The Pats led the league in interceptions and defensive touchdowns in the regular season and were tied for second in takeaways. They'll rely on that opportunistic defense to force turnovers and either score or give Brady a short field to work with.

Whatever happens, the NFL Films crews shouldn't stray far from kickers Kasay of Carolina and Adam Vinatieri of New England, who could end up deciding the game with a game-winning field goal attempt. Vinatieri slumped to his worst season this year, but he's the man who won Super Bowl XXXVI with a 48-yarder as time expired, the very kick every kid who's ever taken a football to the backyard dreams about. He also kicked the game-winner over Tennessee in the Patriots' first playoff game this season, in bitter cold.

Kasay, a 13-year veteran and the Panthers' kicker since their inaugural season in 1995, is no slouch when the game is on the line either. He booted four game winners this year.

Nothing the Panthers do should surprise anyone at this point, but the pick here is the Patriots in a close one. (Take the Panthers to cover that seven-point spread.) Their defense is a little better, their quarterback a little more poised and resourceful. But the only real upset Sunday would be if more than a touchdown separates the two teams down the stretch in the fourth quarter.

New England recovering from a down season in 2002 -- de rigueur for Super Bowl champions in the present era -- to return to the championship in 2003 would make a pretty good story. Not as good as the Panthers' rise from obscurity to a playoff run for the ages, but look at it this way: The world just might be saved one really bad movie.