Why won't this man blink?

Rapid blinking suggests nervousness or deceitfulness. So what does it mean when someone -- like Gen. Wesley Clark -- rarely bats an eye? 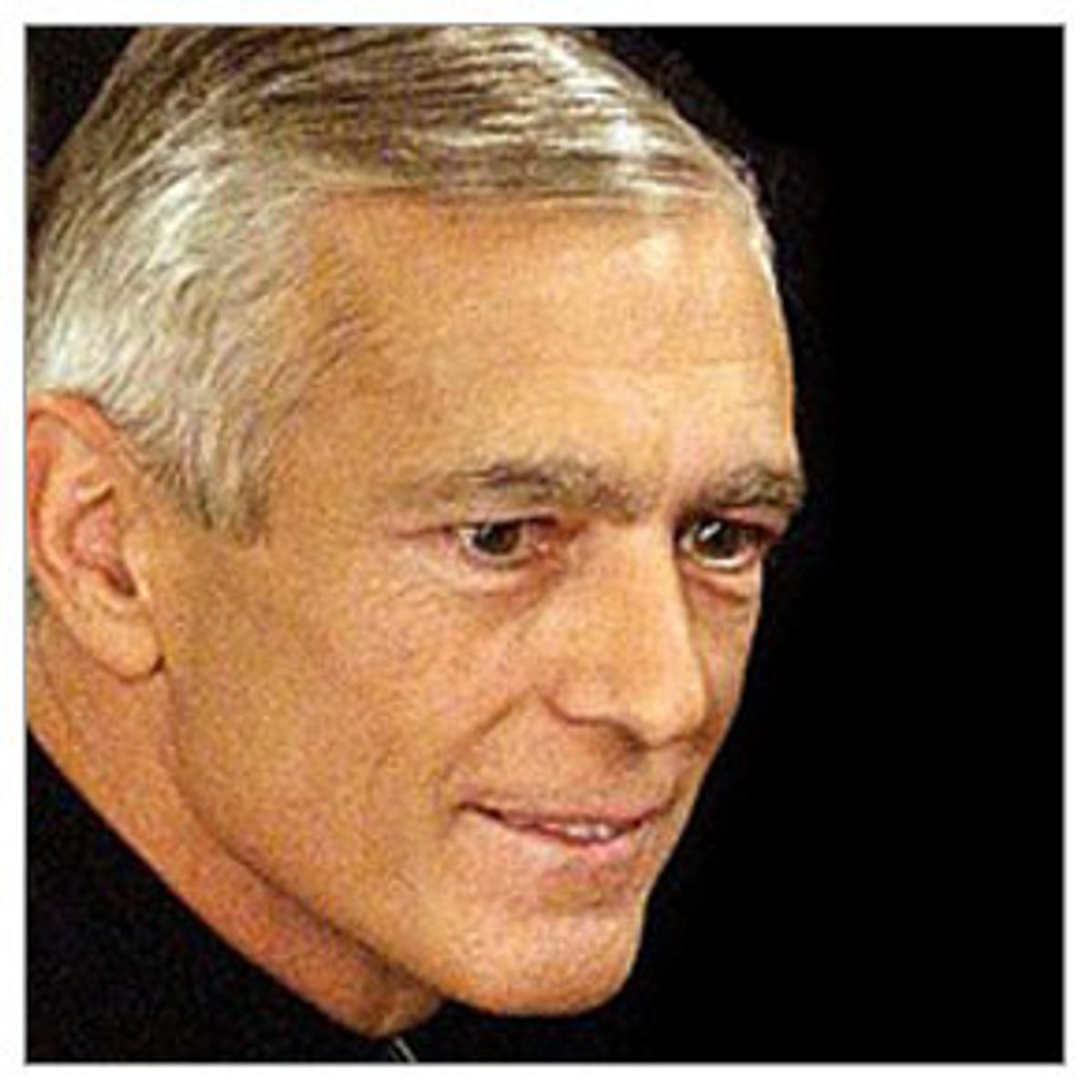 As everyone now knows, Democratic presidential candidate Gen. Wesley Clark is a retired Army general who served as the supreme allied commander during the U.S. military operation in Kosovo. But when I tell you that Clark doesn't blink, I don't mean that he doesn't blink in the face of adversity (although for a war hero and big-shot military man, that certainly seems true). I mean that he literally doesn't bat an eyelash, or does so very infrequently.

According to researchers, the average adult human blinks between 15 and 20 times a minute. That's once every three to four seconds. But, according to my rough calculations, Clark blinks between two and four times a minute, once every 15 to 30 seconds. This may not seem startling in writing, but in action, it can be truly extraordinary, as can be seen in this clip available from Clark's own Web site.

It's so noticeable that the Clark campaign has even prepared a spin for it. "Gen. Clark is aware [that he blinks infrequently] and that's just him," says Bill Buck, Clark's national press secretary, adding after a beat: "Basically, I'd say that the American people can rest assured that as president, Wes Clark, when facing down terrorists, will not blink."

But blinking, it turns out, is a serious, strange business. Serious because it enables the gift of sight by helping to lubricate and clear our corneas. Strange because, like breathing, everyone does it but no one really thinks about it (unless, of course, you happen to be watching Malcolm McDowell get the eye-speculum torture in "A Clockwork Orange"). And most studies on the subject tend to focus on those who blink a lot and on what that means (very roughly, it tends to suggest someone is nervous or behaving in a deceptive manner). What it means when someone blinks infrequently does not appear to have been extensively studied.

But Clark's unfluttered mien has been extensively noticed. "The guy never blinks. It's as if he has no soul," wrote one critic on the far-right Free Republic site. "His character is stellar ... [and] he never blinks, which is admirable. I never blink either," wrote a blogger (and Clark supporter) last month. The news media has pointed it out, albeit to a minor degree. "He rarely blinks his eyes," wrote the New Yorker's Peter J. Boyer in a profile of the general last fall. "He stands firmly in place, rocking back and forth on his toes and heels, and rarely blinks," said Joanna Weiss of the Boston Globe. Even one of the general's former West Point classmates, Gen. Robert Scales Jr., was quoted in the New York Times as saying of Clark: "He never blinks. I don't think he has tear ducts."

David B. Givens, an anthropologist and the director of the Center for Nonverbal Studies in Spokane, Wash., says that although it is common knowledge that people under stress blink faster, he knows of no studies done about low blinking rates. And, he adds, the fact that Clark blinks so infrequently in particularly high-pressure situations (like TV interviews) goes against the conventional wisdom. A 1996 paper published by Boston College psychology professor Joseph J. Tecce stated that the average blink rate for someone speaking on television goes up to twice the relaxed rate, up to 31-50 blinks a minute. "It's pretty amazing because for a person giving a speech, a low blink rate is unusual," Givens said. "It just shows that Clark's autonomic nervous system is operating on a lower level. It's not abnormal, per se, just not on the bell curve."

It's also very hypnotic, because once you begin to notice that Clark doesn't blink, you not only can't stopnoticing, but you also try to play along with him. Givens says this sort of imitation, called ixopraxism, is common in primates. Marc Schoen -- a psychologist at UCLA's David Geffen School of Medicine and a researcher in and instructor of hypnosis -- said that the fascination with Clark is understandable. "I've never watched Gen. Clark speak, but if someone is sort of just gaping, looking straight ahead, it could definitely have a trancing effect on the people looking at him," he said. "It also shows that Clark may have an amazing ability to focus and not be bothered by external distractions."

Christopher Carter, a well-known mentalist and stage hypnotist, told me that the mesmerizing effect of a stare is both seductive and threatening, that it can be likened to the interaction between a predator and its prey. "Being stared at is a very intimate act, and whether someone taught Clark to not blink or he knows it instinctively, he certainly could have a lot of control over other people's behavior," Carter said, laughing. "Although eye contact has fallen out of favor with hypnotists, you'll find that the eyes play a big role in the folklore of hypnosis. Svengali, after all, was a hypnotist, and he was often depicted with lightning bolts coming out of his eyes."

The idea that Clark's slow blinking could be a learned behavior was both fascinating and disturbing, so I called up Col. Thomas Kolditz of the U.S. Military Academy at West Point, from which Clark graduated in 1966. Kolditz, a social psychologist and the head of West Point's department of behavioral sciences and leadership, made it clear to me that he knows nothing about Clark's specific experience at West Point and that nothing in the school curriculum focuses on blinking. He did say, however, that the customs and traditions at the academy reinforce the importance of eye contact between persons, and that cadets regularly practice public speaking in everything from English to mathematics classes. "It could be that [Clark] has practiced [not blinking] somewhat," said Kolditz with a laugh. "But it could also come down to something as simple as his tear ducts."

Tear ducts may, in fact, have something to do with it. Dr. Joseph Kubacki, chairman of the ophthalmology department at the Temple University School of Medicine, told me that blink rates vary according to one's level of concentration (the higher the concentration, the lower the rate), the thickness of one's tears (the thicker the tears, the fewer the blinks, for the most part), and age (babies and young children blink a lot less than adults). "Maybe [Clark] has always been that way," Kubacki told me. "The only disease I know of in which people blink infrequently is Parkinson's, but that's due to a lack of motor skills." I giggled nervously and Kubacki backtracked a bit. "Don't quote me as saying that I think Clark has Parkinson's, OK?"

Clark's low blink rate probably doesn't augur a descent into debilitation, but it does serve as a sort of double-edged sword; he can come across as intensely focused and calm but also robotic, more reptilian than mammalian. It can seem creepy, because, as Givens explains, primates express emotion and an arousal of the nervous system by blinking more. "My husband was just commenting on Clark's unusualness," wrote a woman on John Kerry's official Web site last week. "Clark never blinks. It creeps [my husband] out." Kurt F., a 44-year-old Virginia architect who posted a comment about Clark's blinking on his blog last fall, told me that he remembers feeling vaguely uncomfortable whenever Clark appeared television but he couldn't put his finger on exactly why. "Then last fall, Chris Matthews mentioned something about Clark's not blinking on 'Hardball,'" he said. "And I thought, 'My god, that's it!'"

There's no doubt that right-wing pundits and opinion makers would be more than happy to use such statements as ammunition against Clark ("Hardball" guest Don Imus called him a "psycho" just a few moments before Chris Matthews commented on his not blinking). But conservatives have a lot to answer for when it comes to the blink rates of their own candidates. If, as asserted, a high blink rate signals deception or stress, then the Republicans have done a lot to seem mistrustful and manic. During the fall 2000 presidential debate, for example, the Hartford Courant's Susan Campbell counted the number of times Al Gore and George W. Bush blinked. Bush won (or, rather, lost), with a final tally of 2,867 to Gore's 1,808. In 1996, Bob Dole entered the annals of presidential-debate blinking history when, after being questioned about the nation's economy, he hit a blink rate of 163 a minute. And Richard Nixon's blink rate increased markedly during the Watergate hearings and press conferences.

But although Clark's low blink rate commands attention, it can also blind some culture watchers to the content of his message, which does not necessarily bode well for his campaign. "You can't hear what he's saying anymore because you're just watching his eyes and waiting for him to blink," said Kurt F., the blogger architect in Virginia. "It's like visual noise." Joyce Newman, a well-known media coach in New York, says that she's had clients who blinked too much, but never the opposite. And however much of a liability not blinking could be, she said, she would never coach a client to blink more. "Then they'd be focusing on their blinking and not the conversation. You can't change a behavior like that," she explained.