"The Wedding Singer" meets "Groundhog Day"? Adam Sandler and Drew Barrymore shine in this sweet, flirty comedy about a man who falls for a woman with short-term memory loss. 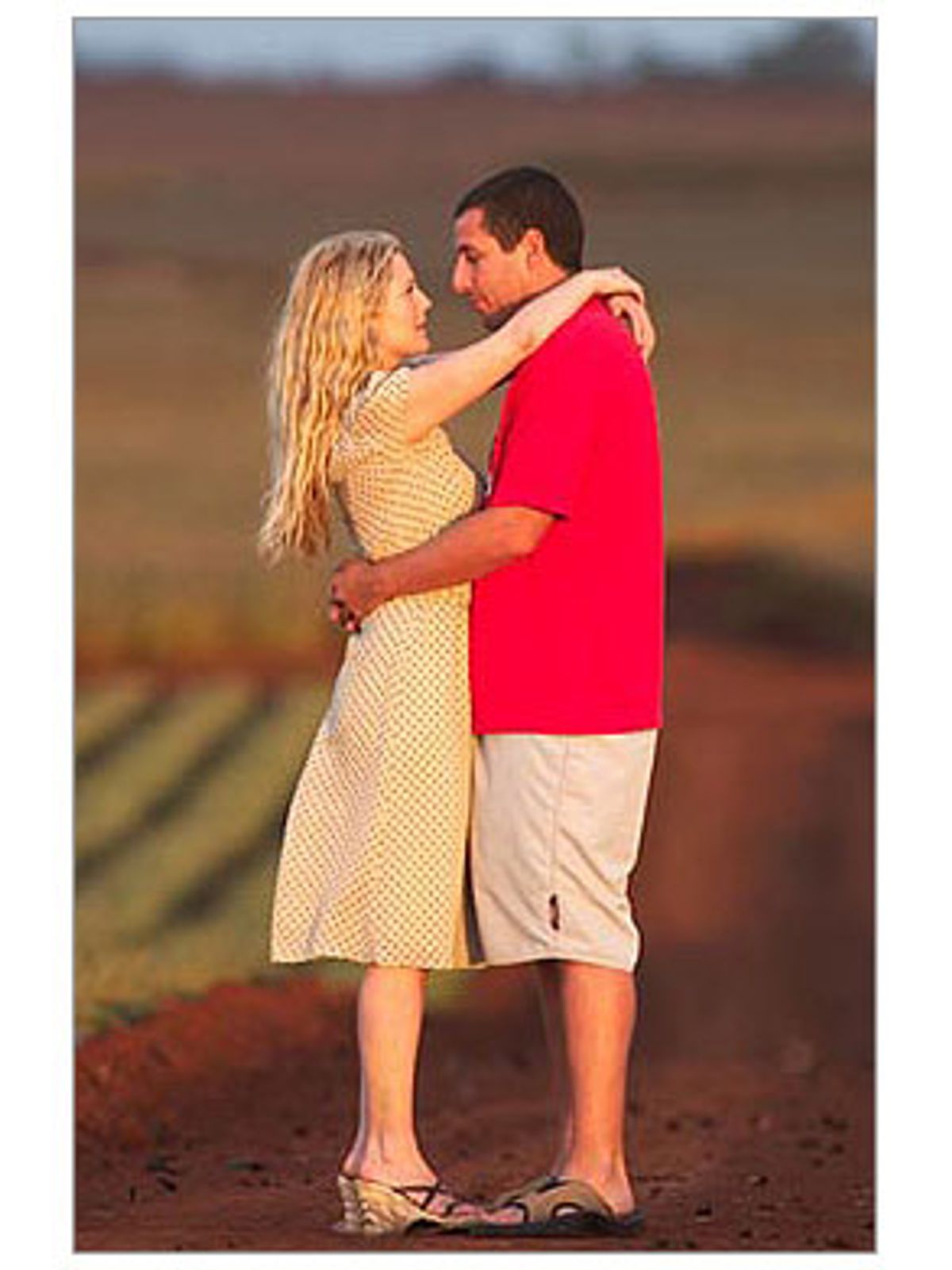 On a bad day, you could probably pick apart Peter Segal's flirty romantic comedy "50 First Dates" pretty easily: The movie's pacing is lax and stringy at times, you can see some of the jokes coming at you from a mile away, and in certain scenes the music (consisting largely of tropical-style covers of '80s music, an obvious subliminal cue designed to foster fond memories of "The Wedding Singer") feels clumsily slapped on instead of smoothly integrated.

And yet "50 First Dates" is so unself-conscious and breezy that you find yourself sailing along with it; its flaws become as negligible as harmless barnacles nestled well below the water line. Henry Roth (Adam Sandler) is a well-mannered, regular-joe veterinarian at Sea Life Park in Hawaii -- his job is to make sure the penguins stay spanking-clean, and to help the walruses steer clear of tummy trouble. Henry's dream is to take an extended sailing trip to Alaska to research walrus life, which is why he resists being tied down to any special girl: He prefers short but romantic (as well as conscientious) assignations with pretty young working women who take their vacations in Hawaii. The women go home, beaming, to regale their friends with tales of the dazzling Hawaiian evenings they spent with the mysterious Henry, who refuses to give out his phone number or, in one case, his real name. Segal introduces this setup in a fleet little montage, like a dragonfly skimming the water's surface: Each of these women confesses she'd like to see more of this sweet fellow named Henry, but all of them seem satisfied with, and reinvigorated by, their holiday fling.

Henry manages to keep things loose until Drew Barrymore, as Lucy, puts a serious squiggle in his plans: He spots her in a waterfront diner (it has the jubilant name "Hukilau Cafe") and, gazing upon her as she cuts apart an order of waffles and rearrange the pieces into a meticulous teepee, he falls in love instantly.

The hitch is that as the result of an accident, Lucy suffers from a serious neurological disorder that erases everything in her short-term memory each night as she sleeps. Which means that, a day after meeting Henry, despite the fact that sparks flew in both directions, she has no idea who he is. And if he wants to date her, much less eventually marry her, he has to win her over every single day.

That's a devilishly clever premise -- one with "Groundhog Day"-like possibilities -- and Segal (who directed last year's "Anger Management") and screenwriter George Wing keep it afloat nicely, following through on little details that more careless filmmakers would simply drop. Lucy lives with her father (Blake Clark) and her steroid-addled brother (Sean Astin, whose fine comic timing is perfectly Hobbit-like, although his buff, glossy muscles are anything but). Lucy has been led to believe that every day is her father's birthday, which is the day her accident occurred. She relives that same day (minus the accident, of course) over and over again, and her father and brother tirelessly uphold the illusion, going so far as to have multiple copies of that day's newspaper specially printed up and stored away, so Lucy can have a fresh one each morning. And Lucy gives her father the same birthday gift every day: It's a tape of "The Sixth Sense," and while her brother and her dad wearily feign surprise at the ending, Lucy exclaims with daisy-fresh delight, "I can't believe that Bruce Willis' character is a ghost!"

You need an actress like Barrymore to make a gag like that work: In fact, "50 First Dates" is one of those movies that's unimaginable with anyone else. Barrymore is a terrific romantic-comedy heroine, not because her timing is so meticulous (it's not) but because her radiance is like an electrical current that everyone around her can happily plug into. I've seen some Drew Barrymore movies that could easily qualify as lousy, and yet I've enjoyed even the worst of them simply because of her presence -- just the sight of her is enough to turn anyone's critical judgment into a happy-face doodle. Looking at her, you can't decide if her face belongs on a chapel ceiling or a naughty '20s postcard -- she's a classic, indefinable, joyous beauty. As Lucy, she's also a dazzling reflective surface, but one with soulful contours. You find yourself looking to her to see how she responds to the characters around her. That may be the subtle joke behind Henry's first glimpse of her: On the day he serendipitously walks into the Hukilau, where she's a regular, the sun is roaring through the windows, and for a split second it's reflected off the butter knife she's using to cut up those waffles. It blinds him momentarily, but the suggestion is that his judgment, and ours, is impaired for good.

Barrymore is a good match for Sandler. As Emily Watson was in Paul Thomas Anderson's invigorating and discombobulating "Punch Drunk Love," she's good at drawing out some of his deeply submerged, quirky sexiness. "Sexy" isn't a word that's often applied to Sandler -- for the most part, his dazed twinkle neither ignites nor smolders. But with "50 First Dates," I think it's finally safe to consider him a sex symbol. Sandler's Henry is sexy not because he sweeps a girl off her feet, but because he's the kind of guy who gets the foundation right: He can ease a woman into a happy, confident state by reassuring her -- with truth, not lies -- that everything's going to be all right. The plot of "50 First Dates" requires that Henry work that mundane magic every day, and Sandler plays him as a guy with the stamina to stick with it for the long haul. He and Barrymore are charming together -- he has a way of looking at her as if he's just been zonked in the head by a moonbeam. And she responds as if she's just realizing what a great guy she's met -- day after day after day.

"50 First Dates" was shot by Jack Green (who has frequently collaborated with Clint Eastwood), and it has a happy, sun-washed gleam -- a movie set (and largely shot) in Hawaii had better look beautiful, but Green has the knack of making it look as if he didn't try too hard. The movie is largely relaxed and pleasurable: It has its share of mildly off-color jokes (including Henry's sincere muttering of the line, "I was petting my walrus this morning and I was thinking of you the whole time") and several silly but likable second bananas (including Rob Schneider as Henry's pal Ula, whose antics include some patently ridiculous faux-Hawaiian singsong and one massive ouch of a belly flop).

But the real sweetness of "50 First Dates" rings through in its gently circling theme: What if you could look at the people you love best, the people you see every day -- or at least very, very often -- as if you were seeing them anew? "50 First Dates" gives you a sense of what that might be like. It's déjà vu as you've never seen it before.