Did the president walk out on the Texas Air National Guard 30 years ago? A guide through the morass of new evidence. 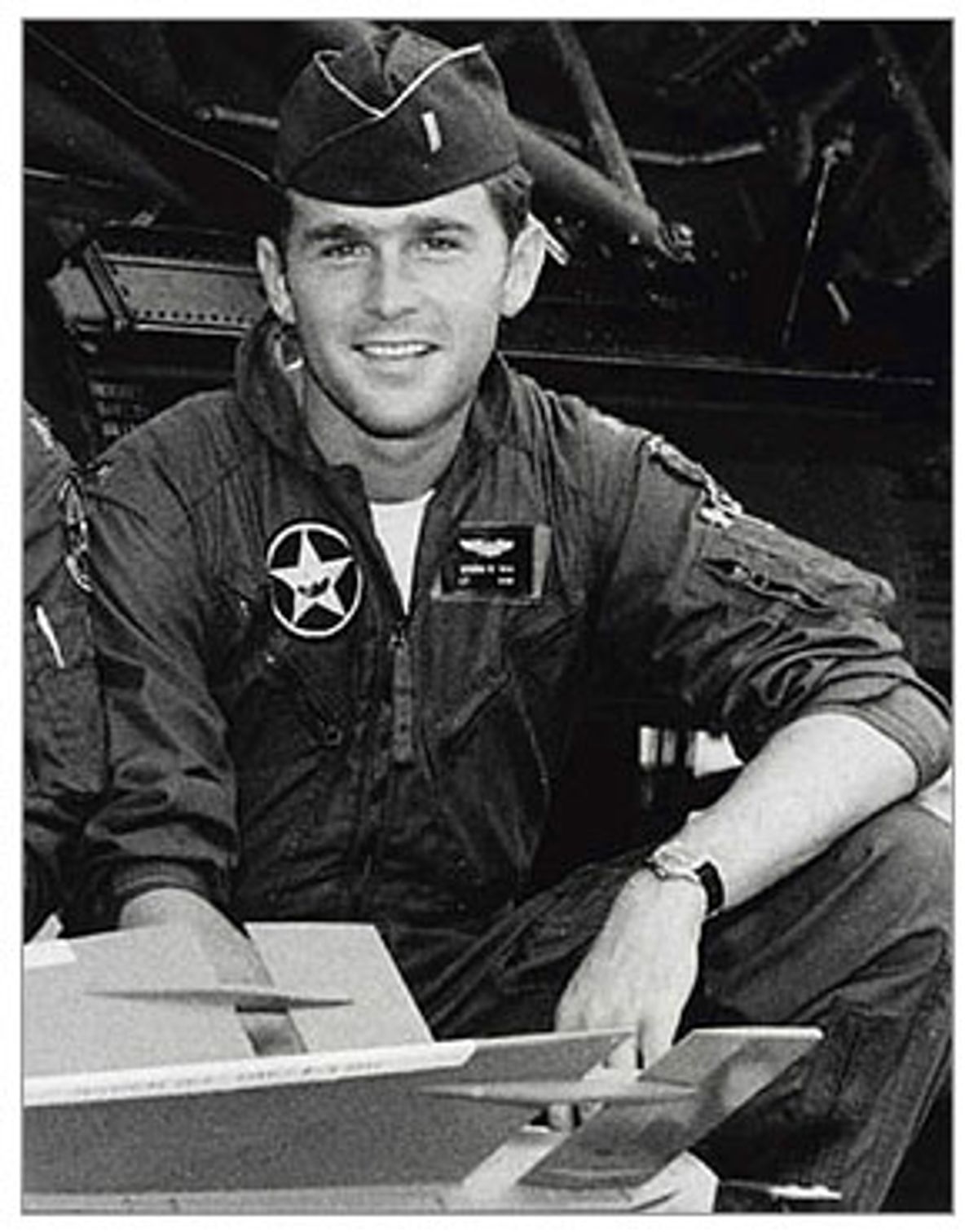 Forty-five months after allegations first surfaced that President Bush failed to honor his obligation to the Texas Air National Guard, the story has returned with a vengeance. As aides release a trickle of selected documents in the White House's effort to persuade the public that Bush fulfilled his obligation, the story continues to fester and questions remain unanswered.

Some key facts have been established. Bush joined the Texas Air National Guard after graduating from Yale in 1968 and began pilot training. From 1970 to 1972 he flew F-102s out of Ellington Air Force Base in Houston. In the spring of 1972 he left for Alabama to work on the Senate campaign of former postmaster general Winton Blount, a friend of Bush's father. But Bush never got proper authorization to train with an Alabama unit. That did not come until the fall of 1972 when he was assigned to Dannelly Air National Guard base in Montgomery, Ala. After the 1972 election, Bush returned to Texas and reportedly served with the Houston unit, before his discharge proceeding began in the fall of 1973. But as the Boston Globe first reported in 2000, there was no proof in Bush's discharge papers that he had ever served in Alabama, or that he served from the spring of 1972 to the spring of 1973. During the summer of 1972 Bush also failed to take his required physical and was stripped of his flying status.

In the 2000 campaign, Bush's spokesman told the Associated Press that after a thorough search he could not find any documents in his military record to prove Bush ever showed up in Alabama. But this week, after Bush declared on NBC's "Meet the Press" that he would "absolutely" release all of his records, and as the press and political scrutiny intensified, that all changed.

Here are some of the key elements and players in the complicated, still unfolding mystery and how they reflect on Bush's claims.

Jan. 6, 1973, dental record
Good news for Bush: Released Wednesday night, the signed document shows Bush was present at the Dannelly Air National Guard base in Montgomery, Ala., on Jan. 6, 1973. It's the first definitive piece of evidence Bush showed up on the Alabama National Guard base. More important, if Bush was still in Alabama in January 1973, it helps explain why his commanders in Houston, when filling out his annual evaluation covering May 1972 to April 1973, wrote that "Lt. Bush has not been observed at this unit during the period of the report." Records indicate Bush served only two days in Houston during that time.

Bad news for Bush: The dental record, which places Bush in Alabama in early 1973, completely contradicts statements from Bush's aides, particularly during the 2000 campaign, that immediately following the completion of the Blount campaign in November 1972, Bush returned to Houston. Moreover, the dental exam still does not prove Bush ever performed any paid duties while in Alabama, only that he went in for free dental care on one day.

Released payroll documents
Good news for Bush: They indicate Bush attended Guard duty while in Alabama and did not take a whole unbroken year off between May 1972 and May 1973. The records show Bush was credited with serving the Guard on 14 days during that crucial stretch.

Bad news for Bush: The records suggest that during a five-month period of that year Bush failed to show for any Guard duty. Worse, there are no corroborating records generated in Alabama to confirm the payroll documents. If Bush was in Alabama and getting paid, as the records indicate, a paper trail originating with his unit in Montgomery should confirm the dates highlighted in those documents. No such records have come to light.

Released retirement-point summaries
Good news for Bush: Like the payroll records, they lay out dates in 1972-73 when Bush was credited with Guard service, including dates he says he served in Alabama.

Bad news for Bush: The documents are not signed by Bush's commanders or anyone else, but are simply a computer-generated overview of points earned. Once again, there's no paperwork from Alabama corresponding to the dates listed.

Band of brothers
Have former Texas or Alabama National Guardsmen who served with Bush stepped forward to vouch for his service between 1972 and 1973?

Good news for Bush: None, because nobody has done so.

Bad news for Bush: None have done so. In 2000, when the story first broke, a group of Alabama veterans offered a $3,500 reward to any guardsmen who could help confirm Bush's whereabouts. Nobody came to collect the money. This week, the conservative Washington Times published a letter from a member of Bush's Texas National Guard unit who insisted he served alongside Bush. Bad news: He served with Bush in 1970 and 1971. Nobody questions Bush's duty during those years. It's 1972 and 1973 that stand at the center of the controversy.

Brig. Gen. William Turnipseed
Turnipseed was the commander of the 9921st Air Reserve Squadron, the National Guard unit in Montgomery that Bush was ordered to report to in the fall of 1972. In 2000, the retired officer told the Boston Globe he was "dead certain" Bush never showed up for duty.

Good news for Bush: Turnipseed's story has been changing in recent weeks, and with each subsequent media interview he seems to cut Bush more slack, even suggesting he doesn't remember whether he himself was at the base during the time in question. This week Turnipseed told the Birmingham News that Bush was under no obligation to serve in Montgomery as long as he made up the time later. "I'm fed up," he added. "People want me to give them something to bash Bush."

Bad news for Bush: Turnipseed has identified himself as a Republican and says he intends to vote for Bush in 2004, which may raise suspicions about his motivations for changing his story. Further, Turnipseed still cannot identify Bush as being present. And he's not the only officer who can't remember seeing Bush. Back in 2000, the Boston Globe reported that Turnipseed's administrative officer at the time, Kenneth Lott, also did not recall Bush showing up for duty. To date, Lott's recollection has not changed. Even if Bush did show up for duty in Montgomery in October 1972, as the documents suggest, there is still no explanation for his five-month absence from April to October 1972.

Albert Lloyd Jr.
Lloyd is the retired colonel who was the Texas Air Guard's personnel director from 1969 to 1995. In 2000 he helped the Bush campaign locate and interpret relevant military documents.

Good news for Bush: Lloyd issued a statement that was released in conjunction with the payroll document on Monday declaring that Bush had "completed his military obligation in a satisfactory manner."

Bad news for Bush: In 2000, Lloyd told the Boston Globe he admired Bush and believed he ''honestly served his country and fulfilled his commitment.'' But this week Lloyd told the Washington Post he wasn't sure if he'd vote for Bush. ""I'm not happy with him," he said.

Bush's suspension from flying
In July of 1972 Bush, a fully trained pilot, failed to take his required annual physical and was subsequently suspended from flying.

Good news for Bush: None. White House chief of communications Dan Bartlett says Bush didn't have to take a physical because, since he was temporarily transferring to Alabama to work on the Blount campaign, he was no longer flying.

Bad news for Bush: As a rule, military pilots don't take it upon themselves to decide when they're going to stop flying, or whether they want to take a required annual physical. "There is no excuse for that," retired Maj. Gen. Paul Weaver Jr. told the Boston Globe. He's the former director of the Air National Guard. "Aviators just don't miss their flight physicals." By failing to take a physical and thereby losing his flying status, Bush should have been subject to a disciplinary review, copies of which would be contained in Bush's military file. But those sorts of documents are considered private under provisions of the Privacy Act, and Bush would have to authorize their release. To date, the White House has refused to do so. Aside from the lone Alabama dental record, the White House has also refused to release Bush's military medical records.

Bad news for Bush: In 1968 he pledged, "I have applied for pilot training with the goal of making flying a lifetime pursuit." Instead, 22 months after the government spent nearly $1 million training him to be a pilot, Bush simply walked away from his aviating career, never flying after April 1972.

Future release of documents
Good news for Bush: He promised to release all materials, but his White House is stonewalling and refusing to allow more than a handful out. So far, nothing damaging has been released.

Bad news for Bush: Undoubtedly there are more documents.