Gibson has accused a lot of people -- including me -- of plotting against his controversial new "The Passion of the Christ." Is it brilliant marketing, or serious paranoia? 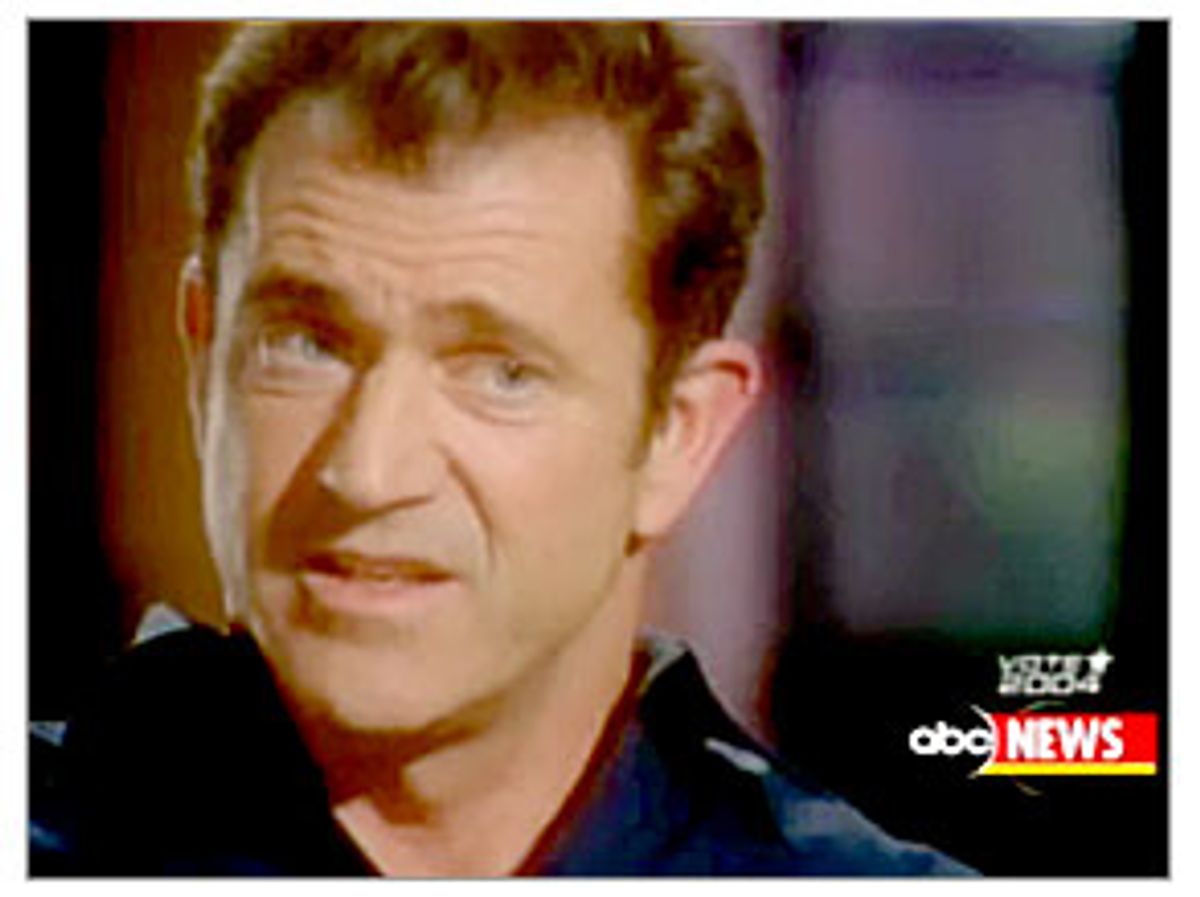 Mel Gibson is on the TV, squinting straight into the camera, talking about ... me.

No, wait, this is even weirder: He's talking to me.

"You can say what you like about me," he says. "I'm a public person, I suppose, although I don't remember signing the paper saying I have no rights to privacy. You can pick on me. But like, if you start picking on my family while I'm out of town, get ready."

He lets that last line hang, leaning forward and raising his eyebrows suggestively. Suddenly he's Martin Riggs, the wild-eyed cop on the edge from "Lethal Weapon," laying down the law to a wiseass perp (in a scene that usually comes just before the one where he lets loose a left hook that sends thug teeth flying like so many loose Chiclets. Um, honey, can you check the deadbolt?).

Gibson is appearing on Fox News in the first in a series of charged and bizarre interviews about his film "The Passion of the Christ"; the most recent was Monday's hour-long exchange with Diane Sawyer on ABC. In addition to defending his movie against fears it will promote anti-Semitism, Gibson has used these appearances to complain about media coverage he says amounts to "character assassination." While he kept the off-putting conspiracy talk to a minimum Monday night -- he's got a movie to promote, after all -- he was never twitchier or more ominous than in his appearance on "The O'Reilly Factor" last year.

"When you touch this subject, it does have enemies," he said. "There are people sent." Asked if he actually believed a reporter was out to discredit his faith, Mel slipped back into the role of tough cop. "I think he's been sent," he said. "That's the way it is. You've got to deal with these things. I'm a big boy and I can take care of myself."

There it was: a shout-out from Mad Max. At the time of that appearance, I had spent the past two months working on a story for the New York Times Magazine about the film, about a church Gibson is building near his home in Malibu, Calif., and about the Catholic traditionalism inspiring both projects. Requests for an interview were first ignored, then dismissed, and then answered, though not exactly in the form I expected -- I idly imagined it might involve strolls across the Italian countryside and late-night chats about faith and history and this whole crazy circus of celebrity. Instead, Gibson elected to go on "The O'Reilly Factor" to complain about a "media attack" on his pro-Christian message.

In addition to representing what surely ranks as the most surreal experience in my professional life -- it just doesn't get much weirder than sitting at home in your pajamas, watching a movie star trash-talk you on Fox TV -- Gibson's appearance on "O'Reilly" transformed what was at the time widely viewed as a curious vanity project into a high-profile battle in the ongoing culture war.

Watching that P.R. offensive unfold at the time, I was simply dumbfounded -- I'm a lone freelance journalist who had approached Gibson's publicist with questions that were bound to come up when he decided to make a movie that not only represents a huge artistic and financial risk but also an open effort to evangelize. Why not simply address questions about faith, family and history? Why send a $400-an-hour litigator nicknamed "Mad Dog" after me, the New York Times and a homeowner's group that reviewed plans for his church? Why employ the same ignore-and-then-attack strategy with scholars who wanted a say in how the Passion was portrayed? Why limit screening audiences to political conservatives, evangelical Christians and Kathie Lee Gifford? Why offer this response to a critical piece on the film by New York Times columnist Frank Rich: "I want to kill him. I want his intestines on a stick ... I want to kill his dog."

Over the course of the past year, I've flip-flopped between two explanations. The first is that the aggressive approach is all part of a preplanned, Machiavellian promotional campaign designed to antagonize Hollywood and appeal directly to church groups and the NASCAR crowd -- in effect, to treat "The Passion of the Christ" as a political candidate aimed squarely at the red states. Which makes sense, given that "The Passion of the Christ" is a self-financed project with no big stars filmed entirely in the languages of ancient Palestine. It was rejected by his home studio Fox and snickered at by industry peers. He himself called it a potential "career killer." And yet it opens on Feb. 25 in 2,000 theaters; all signs point to a monster opening weekend and a long life in the industry paradise of DVD aftermarket. Church leaders are buying huge stacks of advance tickets, some for themselves, some just to make a point.

The violence that some find so objectionable -- and at a certain point in the film, I did start to wonder if Gibson's amorous depiction of torture might be inspired by something a little baser than spirituality -- is sure to draw moviegoers who don't get fired up by religion but love a gory crowd pleaser like "The Patriot" or "Braveheart." Far from being a "Battlefield Earth"-style bomb, Gibson's movie is poised to easily recoup its creator's $25 million investment. Gibson's production company Icon is already talking about starting an entire division devoted to religious films.

Mark Silk, a professor of religion and public life at Trinity College in Connecticut, recently completed a study of the media's coverage of the film and the religious issues involved. His final report, titled "A Case Study in Media Manipulation?" details how Gibson fanned the flames of controversy while complaining about the heat. "Gibson appears to have been doing what Hollywood producers always try to do: get as much positive buzz as possible about his film before the public," he says. "What's different here, of course, is that the people he has gone to for such buzz have not been the usual collection of flacks and blurb-meisters but some of the most ideologically engaged media folks in the country." Silk concludes, "To say this has been a press agent's dream is to understate the case on a truly biblical scale."

Then again, Gibson's motivations might be much more, as they say, faith-based. As the premiere looms closer it seems increasingly clear that Gibson genuinely believes he has been targeted by shadowy forces aligned to subvert his message of salvation. The strongest evidence of this notion is the film itself, a rough cut of which I saw last week. "The Passion of the Christ" is indeed as bloody, grueling and ultimately difficult as Gibson promised it would be. (I clocked a climactic flagellation scene at just over 10 minutes.) Leaving aside the portrayal of Jewish clerics as vengeful villains and of Pontius Pilate as a sympathetic stooge who was essentially bullied into crucifying Christ - that matter is better debated by Bible scholars - the film is obviously the work of a man who believes he possesses the truth and that the truth has enemies.

I got a brief but intense tutorial in that perspective from Gibson's father, Hutton, the 84-year-old author and activist who has criticized the Vatican for more than 30 years, writing books titled "Is the Pope Catholic" and a newsletter, "The War Is Now!" which rails against a pope he calls "Garrulous Karolus, the Koran Kisser." Last November, Hutton Gibson invited me for a weekend at his home near Houston to share his revisionist takes on the pope's declining health ("I think he's playacting"), the scandals facing the Catholic Church ("The Vatican bred it all"), and historical accounts that 6 million Jews died in the holocaust ("I don't believe that for a minute").

In comments since that interview was published, Gibson has sought to downplay his father's extremism while suggesting that the holocaust denials were somehow squeezed out of an innocent bystander as part of a sinister plot. "As soon as we started filming, that beacon of journalistic integrity the New York Times dispatched someone to go down there and take advantage of my father," he told Sawyer. "Their whole agenda here, my detractors, is to drive a wedge between me and my father."

I'll admit that I was deeply anguished during the two days I spent listening to Hutton Gibson. But it wasn't because I felt badly about "driving a wedge" between father and son, or about talking to a man who is, after all, as entitled to his opinion as the pope, a Supreme Court justice or anyone else active in public life at an advanced age. The source of my angst in Texas had nothing to do with Hutton Gibson's age and everything to do with his worldview; as he laid out his alternate history of the 20th century, I had that gut-churning sensation familiar to any journalist witnessing something horrible -- the shock of seeing it, laced by the excitement of being on hand to record it. And while I never assumed that Hutton spoke for his son, the film Mel produced and his comments about it certainly suggest father and son share a core of moral certainty that can alternately come off as righteous, uncompromising or pathological.

So which is it: Is Gibson a master marketer or a conspiracy-minded ideologue? After a year of reporting on and following this remarkable story, I still can't decide. Gibson himself seems happy playing both roles. He said it best at the press conference at Rome's Cinecitta Studios two years ago. Twirling a cigarette mischievously and looking for all the world like the wild-eyed cop who always gets his way, he told the crowd, "They think I'm crazy, and maybe I am. But maybe I'm a genius."

Christopher Noxon is a Los Angeles-based writer and contributor to the New York Times, the Los Angeles Times and Playboy. An archive of his stories is available here.