Hot stars notwithstanding, you won't have the time of your life at this thin, overedited take on the '80s classic. 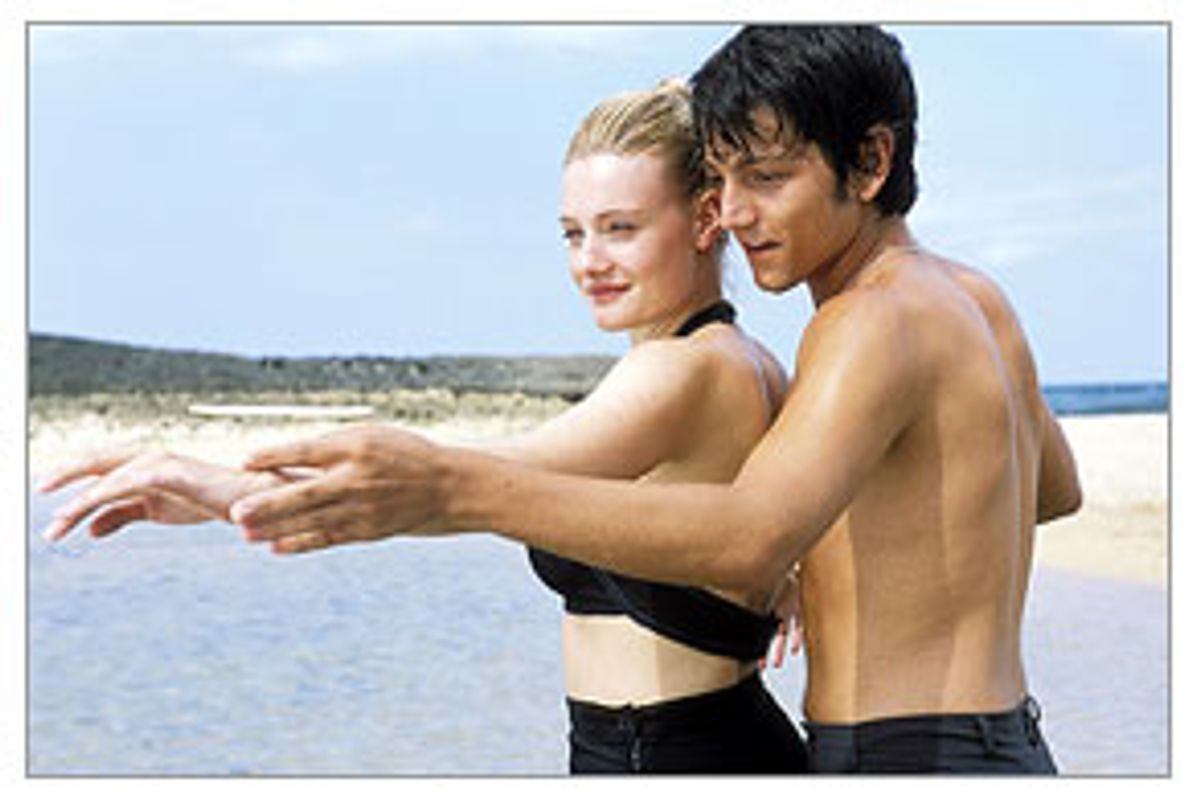 If you go to "Dirty Dancing: Havana Nights" to enjoy the sexiness of the two young leads, Romola Garai and Diego Luna, you're not likely to be disappointed.

In last year's charming and overlooked film version of "I Capture the Castle," Garai gave a subtle performance as a young girl coming to terms with what used to be called her "womanly desires." You could see the transformation in the change of her carriage over the course of the movie, from slightly hunched-over to a self-assured upright bearing. Here, as the American daughter of a Ford executive relocated to Havana in the fall of 1958 (right before the revolution that drove Batista out of the country and put Castro in power), she gets to enact another young woman's sexual blossoming.

Garai's Katey is a bookworm (it's always the bookworms who effect the ripest transformation) who falls for Javier (Luna, one of the stars of "Y Tu Mamá También") a busboy at the luxury hotel where she and her family live. As in the first "Dirty Dancing," the change comes from dance. Javier teaches her Latin dancing and his exhortations to "feel the music" become the means out of her cocoon.

One of the reasons this pair is so charming together is that Garai looks physically imposing next to the puppyish Luna. Her figure isn't "womanly" or any of those other polite metaphors for big, but she's no sylph either, and she's got an inch or two of height on her costar. Garai has curves and when the movie gets her out of her cardigans and school uniform and into snug strapless dresses, she looks fantastic.

The movie, perhaps with its eye on the PG-13 rating, is unnecessarily coy about Katey and Javier's lovemaking, but there's a nice chemistry between Garai and Luna nonetheless -- the kind tinged with the adolescent flush of our first taste of sex. Garai's line readings rise and fall on the quality of the lines, which at best are adequate, but she's an engaging presence, and Luna, with his sideways smile and slightly sleepy eyes, charms by underplaying -- Javier is happy just to drink Katey in, and you can't blame him.

Garai and Luna carry "Dirty Dancing: Havana Nights" on their shoulders, and they have to, because in almost every other way, it's a slipshod piece of work. As with the original, the story is essentially about a good girl who falls for a boy considered her social inferior though who, in fact, is much more a gentleman than the well-brought-up boys she's supposed to be dating. (The American boy Katey briefly dates, played by Jonathan Jackson, is the type of preppy noodle who looks like his spine has been replaced with seersucker, and his arms by an octopus' tentacles. He's blobby and persistent.)

The screenwriters, Boaz Yakin and Victoria Arch, avoid what was worst about the first "Dirty Dancing." In that movie, Jennifer Grey's Baby was screenwriter Eleanor Bergstein's idealized view of her own teenage self, and the picture turned into a princess fantasy in which Baby had to be proved smarter than everyone else around her. (That's what the movie was enjoyable in spite of.)

Yakin and Arch (those names look like a law firm that advertises on late-night TV) have avoided making Katey the font of all wisdom. But they've also avoided coming up with a plot that's more than a series of flashcards, or writing scenes that go on long enough for the characters to develop. We find out everything we need to know about the characters the first time we see them. Katey's relationship with her younger sister (Mika Boorem) barely exists -- so we don't know what they're upset about when there's a rift between them.

The back story in "Dirty Dancing: Havana Nights" is the past of Katey's parents, played by Sela Ward and John Slattery, champion ballroom dancers who gave up competing for a settled-down, upper-middle-class life. Katey's mother resents having given it up, and that's part of what she objects to when her daughter takes up with Javier. The resentment mothers feel at their daughters for taking the chances they never did is not one you'd expect to see explored in a pop movie. But as written, Ward is just the uptight villain.

Then, given her rigid performance, you can't imagine Sela Ward being anything else. Ward is waxy here in the manner of Joan Crawford and Lana Turner in their later matron roles, and her eyebrows appear to have come from a dissected tarantula. The actress plays the whole movie with such a smug, superior look on her face that I kept hoping a band of Castro's rebels would drag her off and hold her for ransom. You can't understand why anybody in her family puts up with her, though it may be partially explained by the fact that the role of the good sport has come to be John Slattery's specialty (he fulfills the same function in "Mona Lisa Smile"). An affable actor, Slattery deserves better.

The plot construction here is especially lazy. The whole movie is built toward the dance competition that Katey and Javier enter. The movie gets to it, only to toss the whole climax away with the advent of the revolution. "Dirty Dancing: Havana Nights" tiptoes around the politics involved. It's an honorable choice on the screenwriters' part to have Javier say he wants to stay in hopes that the revolution will improve life for him and his family. That's what a Cuban in his position would likely have felt at the time, and it would have violated the character to have had him speak with hindsight about what Castro's revolution became. But not wanting to look like they approve of Castro, the screenwriters make Javier's brother, who actively supports the revolution, the equivalent of Batista's thugs -- and that's a convenient way out.

The movie might have withstood all this if the director, Guy Ferland, had just allowed us to bask in the dancing. But the dance sequences, choreographed by JoAnn Jensen, have been edited, by Scott Richter and Luis Colina, with no sense of allowing us to actually watch the dancers. The first time Katey goes into a Cuban club, the mass of sweaty, grinding dancers filling the screen suggests the teeming liveliness of a Romare Bearden canvas, and it's just about the only time we're allowed to look at dancers and see their whole bodies. The dance sequences look as if they'd been edited in the chop shop where Javier's brother takes apart stolen cars. There's no sense of either the rhythms of the dancers' bodies or the rhythm of performance. It's just cut, cut, cut. And, probably in the studio's hopes of selling the soundtrack, Latin music that would have been appropriate to the period has been replaced by contemporary Latin sounds that throw you right off the movie's setting. (It's a safe bet that nightclub performers in 1958 Havana didn't exhort the crowd to "Represent!")

The original "Dirty Dancing" was no model of film craftsmanship, but it was a hugely enjoyable pop fantasy that at least took the time to flesh out its story and to allow us the pleasure of watching the dancers (maybe because the director, Emile Ardolino, had worked in the theater). Next to "Dirty Dancing: Havana Nights," the first picture is like something out of the golden age of Hollywood. About six months ago I saw the trailer for this movie and it looked like such a lush, romantic daydream I couldn't wait to see it. Having sat through it, I still feel I'm waiting to see it, after having sat through a much longer trailer.