"The Passion of the Frodo" sweeps, and more beautiful stars bravely impersonate the genuinely homely to great success. But all the crooked teeth in New Zealand can't save a dull, dull Oscar night. 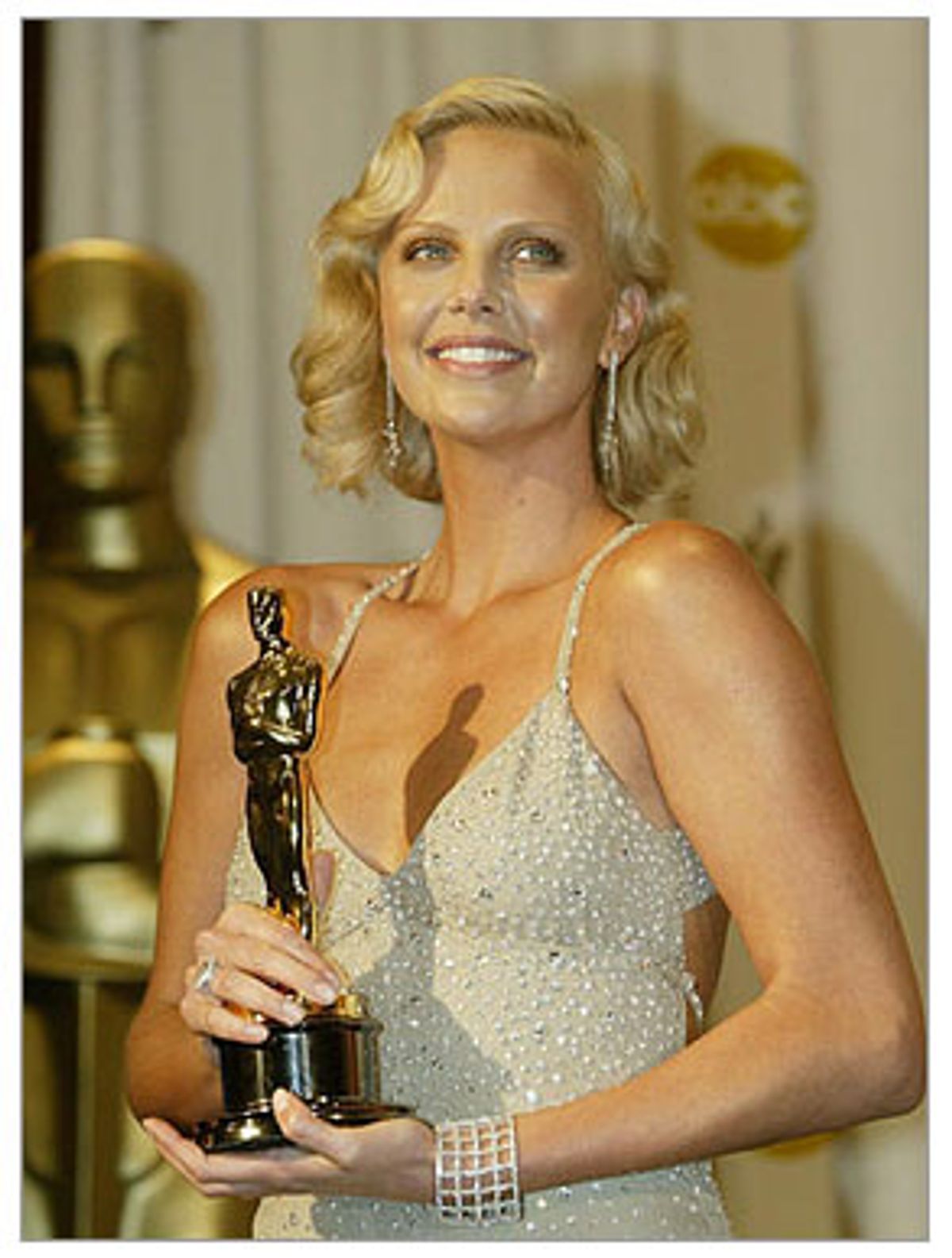 Squarer than robot shit. All the joy and irreverence of a hotel management seminar. Strictly by the book, and the book was the New Zealand census, apparently, and less interesting. The fearful cadavers of the Academy laid down the law with their spotted old talons and brought down an unbearable evening of easy-to-chew television for the elderly and prim that looked and sounded like a slowed-down version of the Lawrence Welk show without all the stimulating colors. Not even the clothes were interesting, apart from Uma Thurman, who wore a Fabergé baked potato.

Janet Jackson ruined tits for everyone, so the vast majority of dresses were strictly Mormon prom. Even Elvis Costello wore a plain black jacket, for The Christ's sake. Nobody even had interesting new plastic surgery, apart from Joan Rivers, whose face looks like it was gnawed out of marzipan by the savages of Easter Island, and Angelina's Billy Bob-shaped laser scar.

Actually, I think the horrendous cash success of the Passion of the Mel was responsible for all possible fun being extracted from this year's ceremony -- cranky old Oscar figured out that most of America hates sex, dancing, gay people, ethnic people, ribald or drug-related humor, and opinionated or irreverent takes on current political events, so the golden man decided to show us just how well-behaved and self-censoring he be; Hollywood fidgeted like kids in Sunday school, and us unwashed heathens out here in TV land had to resort to binge drinking.

"Movieshe are the forshe thot bindshe ush togethah. Shelebrate the mahgic," croaked the decrepit Gone Seannery, establishing the octogenarian Bisquick casserole flavor for the evening in the first five minutes. Even the ordinarily amusing Billy Crystal had crystallized into a pillar of Klonopin -- who were his writers? Who in this day and age rhymes Old Man River with "Dark as mom's chopped liver"? That's comedy so anciently borscht-belt it should have been in Aramaic. When he picked Julie Andrews as his designated whipping-matron, it was clear the corporate fear factor was jacked up to orange alert.

There were no pleasant surprises. Tim Robbins beat out a token Asian and Djimon Hounsou, that beautiful African, for best supporting actor; I thought Hounsou deserved it more. The Wonderful Magical Black Person is now a cliché so absurdly pervasive I'm surprised there aren't Franklin Mint collector plates of damp-eyed homeys gazing heavenward in a spiritual, Native American fashion, but Hounsou still brought a lot of heart to his role. Tim was not exactly a revelation in his dunced-out portrayal of an emotionally damaged guy, but he has been loitering purposefully around Hollywood long enough, and he must have promised to behave; usually an incorrigibly mouthy liberal, Tim's thank you was so safe, you knew somebody had his balls in a professional threat-sandwich.

The Road to Oscartown has always been paved with retardation and weight gain, which is why it was obviously Renée Zellweger's turn to get best supporting actress -- fat, thin, fat, thin ... she may be the greatest actress since Oprah. But lately, getting the award is all about Puttin' On the Ugly: beautiful young Hollywood hotties playing grizzled and wizened hard-luck cases. Let's review: It worked for Nicole Kidman and her extra nose last year, and Halle Berry's realistically hideous sex with Billy Bob Thornton's deflated ass-flaps in 2002. Hilary Swank got the gold when she transformed herself into young Donny Osmond, and it almost worked for Salma Hayek when she grew her mustache out.

But when I think of homely, miserable, ornery, masochistic jockeys with eating disorders, Tobey Maguire doesn't exactly gallop to the forefront of my mind. Lizzie McGuire would probably make my short list before Tobey. Don't try to tell me there's no scraggly little ex-fuckups in Hollywood. You know what casting call might have been a stroke of casting genius for "Seabiscuit"? Corey Feldman. That kid has the face of pain. Any of Young Hollywood's recently sober casualty-boys would have done the trick ... but "Spider-Man"?

Concurrently, when I'm thinking of hard, early American women barely scraping out a living, subsisting on tablespoons of dirt and weeds at the end of the Civil War, I do not think of Nicole Kidman and Renée Zellweger, the two most wildly pampered women in L.A. and possibly the world, who probably needed to have their hair strands individually mussed for hours each day they shot "Cold Mountain."

Hot-hot-hot model/ballerina/actress Charlize Theron bravely gained 30 pounds, shaved her eyebrows and spent half an hour in the makeup chair each day getting all ragged-out and splotchy. Her genuinely terrifying performance notwithstanding, I'd rather have seen the best actress award go to an organically homely person.

"Lord of the Rings," realistically, had no competish.

"Master and Commander" was a silly male costume drama, a moistened "Gladiator," what with Rusty Crowe and his locks of goldenest Clairol, pouncing manfully about the deck with his beefy guts of lager, minding scuppers both bow and stern. Whilst cannonballs splintered the poop deck and wee boys' arms were sawn off, me whistle was whetted for e'en finer upcoming computer graphicks dramas on the high seas, like "Troy." Nay, that film 'twas neither sentimental enough nor was there sufficient bodice-rippage for the Oxygen demographick.

"Seabiscuit" was a stink-pony -- superclean schlock from nose to bumper. Spare me the sight of quaint, Depression-era crowd scenes that look like they've been swaddled in tweeds by J. Crew, surging in rapture to majestic life-insurance violin orchestrations. That shit was strictly for Burl Ives, Pepperidge Farm and creamy ranch dressing.

"Mystic River" -- eh. Sorry, boys: Emotional Violence for Dummies. While Sean is great at bawling openly toward the sky-cam in "Why hast thou forsaken me?" fits of bathos, unrestrained Mook Feelings do not count as emotional nuance, in my book. I've seen more skillfully calibrated grief at Super Bowl parties. Sean Penn is unquestionably the finest actor of his generation, but his best actor win was strictly the Academy playing catch-up ball -- they got embarrassed that they didn't recognize him for "Dead Man Walking" or his most naked Oscar bid, that dribbling "Sam I Am" gambit. Sean's time was overdue, but "Mystic River" was just one Mexican soap opera out of dozens he'll flex his scenery-chewing skills on in the years to come; Bill Murray, on the other hand, may not get another shot. Sad, I say.

"Lost in Translation." OK -- I'm jealous of Sofia, I admit it (knuckle-biting spleen, arrrgh, arrgh). I haven't seen the movie yet, but she's clearly got great taste and gets her inspiration from smarter sources than anyone else, at the moment -- still, she's too young and the movie was too quirky to compete with the whole of Middle-earth.

I didn't really dig the maudlin Irish sob-fest that was "In America" -- it was a shamelessly heart-poking, Spielbergian emotional short-con -- basically "The Color Purple" for broke, co-dependent Catholic honkies, shot in glorious Technisqualor. Samantha Morton is the most Serious Actress going, these days, in that she tends to naturally look like she's put on 20 extra pounds and a prosthetic nose, but that vintage Givenchy dress looked a bit like twin Edsel grills strapped to her tits, and it just wasn't her night.

"Lord of the Rings: The Passion of the Frodo" was, for me, a great tool of conversion to Hobbitism. They got me where I lived. I was riveted to my seat for the full three hours; I cried so much that by the end I was holding a cardboard tub of polenta. A wildly ambitious and unbelievably realized monster achievement in the genre of epic filmmaking. Bully for the elves, but it's not like this sweeping win of Peter Jackson's was any great shocker -- certainly nobody needed to watch the dental nightmare that was the 76th Oscars all the way to the end to figure out who was going home with the big jackpot.

Shame on you, Oscar, for being such a craven corporate pussy. Shame, shame, shame. The only way you can possibly redeem yourself is to get Dave Chappelle to host in 2005 -- if not, you may as well go lie down and die in some Opus Dei donation box, because the TiVo contingent will have nothing to do with you. You've never had genitals, but now you clearly have no spine.