Branding Kerry with the L-word

The Bush team and the pliant media are already hitting him as a Massachusetts liberal. Can Kerry counterpunch? 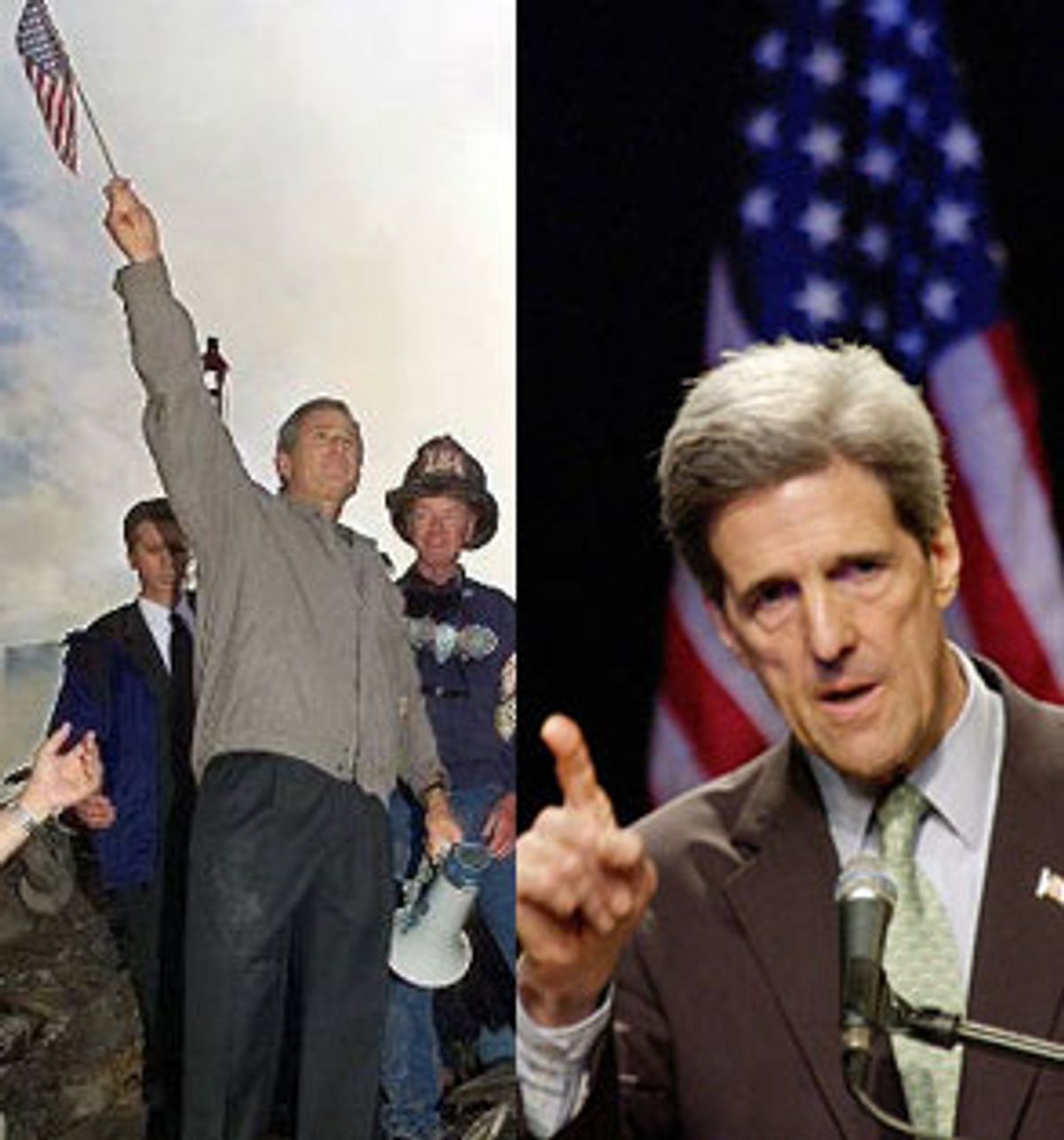 The toiling trolls in the Republican National Committee's opposition research dungeon must have been thrilled to hear the New York Times' Elizabeth Bumiller bark the L-word at John Kerry.

What could be more uplifting to the spirits of nervous conservatives than a Times reporter confronting their most likely presidential opponent over his Senate voting record? Her insistent, shark-jumping debate performance went considerably further than they probably dared to imagine. Citing an article in the National Journal that rates Kerry the "most liberal senator in the Senate," as she put it, Bumiller demanded: "How can you hope to win with this kind of characterization in this climate?"

Actually, the national polls that show Kerry leading Bush suggest that he is doing very well in the current political climate. But Bumiller obviously understands that on the eve of Kerry's confirmation as the Democratic nominee, the battle about to commence is how he will be defined -- and who will define him.

For many months, White House surrogates such as RNC chairman Ed Gillespie have been performing experiments on Kerry's image, trying to paint him as a pandering hypocrite, a special-interests candidate, a rich elitist; and when none of those cut deep enough, they will inevitably work their way back to "Massachusetts liberal," the formulation that helped the president's father defeat Michael Dukakis in 1988.

The Republicans will cite statistics lifted from sources like the National Journal analysis -- which, as Kerry quickly pointed out, omitted dozens of votes he had missed while campaigning, and distorted others to fit an ideological preconception. (Why did the magazine decide that a vote against the Medicare prescription drug bill necessarily counted as "liberal," he wondered, when so many Republican conservatives opposed the president's proposal as liberal profligacy?)

They and their media claque will incessantly tick off various Kerry positions that fit the liberal stereotype, while omitting others that don't. They will denigrate Massachusetts as if the home state of Sam Adams, John Adams and John F. Kennedy were a hostile foreign power. And did you know that 20 years ago, Kerry served a term as lieutenant governor to Dukakis? By November, that fact will be the nation's best-known trivia answer. (Somewhat more mysterious is exactly what George W. Bush was doing back then, but never mind for now.)

And as they have already begun to do, they will cite specific Senate votes, stripping away context and meaning whenever necessary. That was the Gillespie ploy exposed in Slate by Fred Kaplan, who showed that many of Kerry's alleged votes against specific weapons systems were procedural, not substantive.

The subtext of every charge will be to tar Kerry with the negative vision of liberalism constructed by the right during the past three decades: unpatriotic, depraved, soft on crime, irreligious, immoral, profligate and weak.

Although the Republicans will find adequate evidence in the record to call Kerry a liberal -- including his career ratings by environmental, feminist, labor and sundry other advocacy groups -- the nasty subliminal image may not be so easy to hang on him. That is why they have been testing other approaches -- have you heard the one about the rich elitist special-interest hypocrite? -- ever since he regained front-runner status in Iowa and New Hampshire.

For the Republicans, the problem with all of the alternative labels is that they can be turned back so effectively on the president. Rich elitist? Despite Bush's folksy style, his blatant coddling of the wealthiest bracket of taxpayers makes that a dangerous epithet. Special interest? The services rendered by the Bush administration to the energy industry and nearly every other corporate sector, while collecting millions from their lobbyists and executives, makes that cliché sound hollow, too. Projecting a candidate's own sins onto his opponent can be a perilous strategy.

So "liberal" will undoubtedly serve as the Republican default attack. Slapping Kerry with the traditional label offers the added value of motivating the Republican base, from which party strategists hear scary grumbling about Bush spending and immigration policies. Having changed the subject in recent days by endorsing a constitutional amendment against gay marriage, the president and his supporters can be expected to emphasize Kerry's votes on abortion, gay rights, taxes and the death penalty, the culture war issues that help Republicans fire up the GOP hardcore.

Those issues may not cost Kerry much support among voters who would ever consider casting their ballots for him, or any other Democrat for that matter. What would damage him badly, however, is a successful effort to categorize him in cultural terms as the stereotypical "Massachusetts liberal" who supposedly disdains mainstream values. If he can be portrayed as "soft" and "weak" and mildly silly, the Republicans may be able to persuade voting blocs in key swing states that he is unfit to be president.

Unlike other Democratic candidates who have suffered that fate, Kerry has certain qualities that may serve to protect him.

Beyond exploiting his status as a Vietnam veteran, he has learned that the most defensible posture is aggressive rather than cringing. He doesn't hesitate to talk about sports, hunting, motorcycles -- all of which serves to bolster the image he is making for himself as someone willing to "fight." Surrounded by veterans and firefighters, he doesn't fit the stereotype of the left-wing wimp.

Moreover, his voting record is sufficiently mixed to frustrate the more conventional forms of stereotyping. Like Bill Clinton, Kerry has inoculated himself as an advocate of fiscal responsibility and welfare reform, and a tough opponent of crime. He was a prosecutor before he ran with Dukakis.

Unlike the passive Dukakis, Kerry decided early on to strike back hard whenever he is hit. That healthy attitude reflects the broader Democratic mood. The Republicans will soon start spending millions to negatively define him as a "Massachusetts liberal." When they do, Kerry will have a chance to show why those are really fighting words.