The puffy hairstyles, bad nylon shirts and leather-thong necklaces are there, but the big laughs, alas, are not. 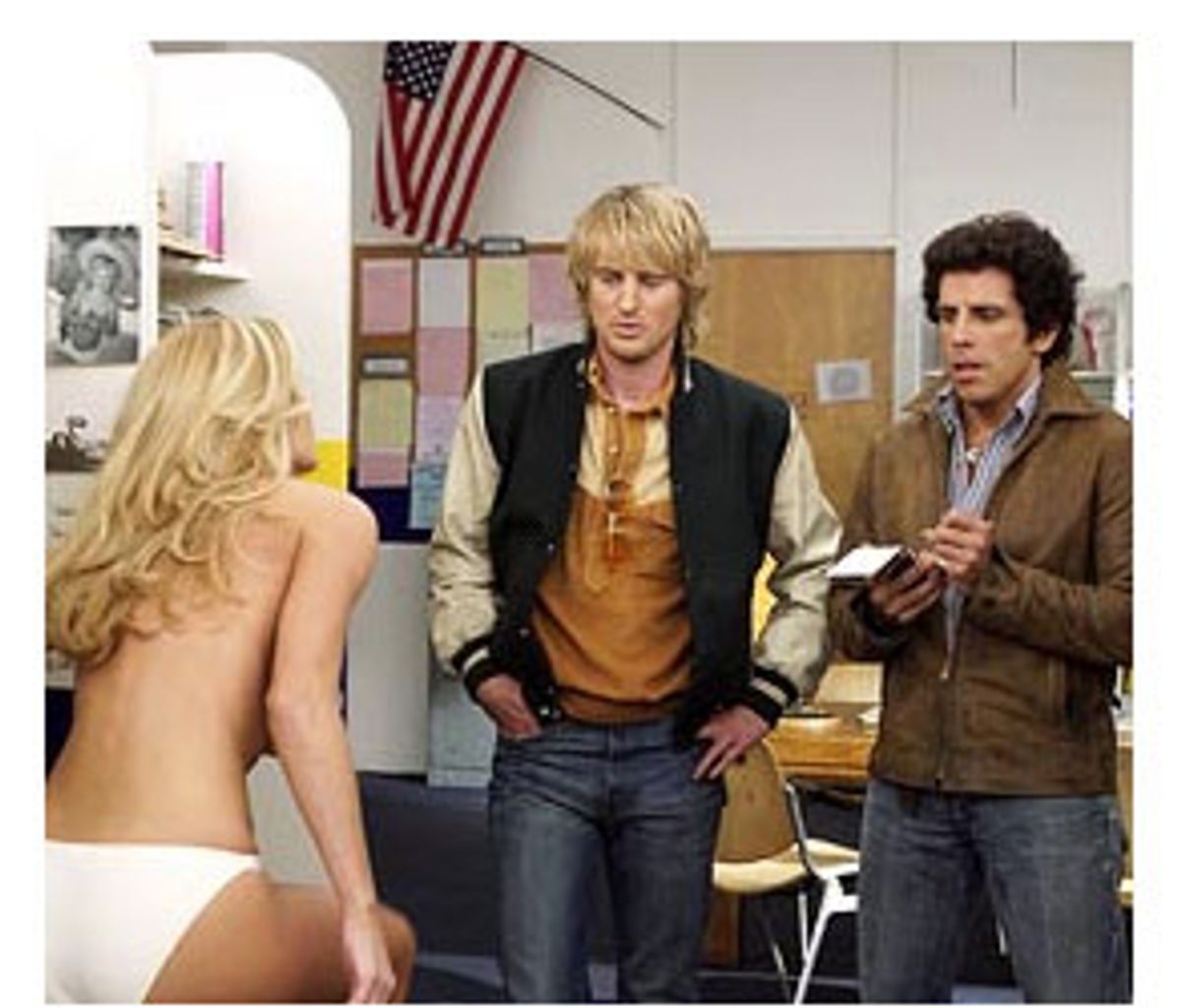 We're a culture of TV watchers, and there's nothing inherently wrong with that. But do we have to bring TV with us everywhere, even to the movies? If "Starsky & Hutch," directed by Todd Phillips ("Old School"), the latest in a long, frayed string of movies based on old TV shows, held up on the big screen, there'd be no need to complain. Good movies can come from anywhere: Their quality can't be measured by the sparks that inspired them in the first place.

But "Starsky & Hutch" moves slowly and without much grace; it tries to jiggle laughs out of us instead of letting them flow freely. It has no reason to exist other than as a kind of hat rack for the filmmakers and stars to hang quotation marks on, and they overload it. Puffy hairstyles, bad nylon shirts, leather-thong necklaces: If these relics of the '70s still get yuks out of you, then "Starsky & Hutch" is your movie, because the gags written around them (in a script by Philips, John O'Brien and Scot Armstrong) don't amount to much.

Ben Stiller is David Starsky (played by Paul Michael Glaser in the original series), a detective in the fictional California locale of Bay City. Starsky does everything by the book, going after even minor thugs, like purse-snatchers, with gusto. ("In Bay City, when you cross the line, your nuts are mine!" he explains in a stern voiceover.) The much looser Ken "Hutch" Hutchinson (Owen Wilson) is assigned to be his partner: Hutch is the kind of cop who, upon discovering a dead body washed up on the shores of Bay City, tries to poke it away with a big stick so the current will carry it down to the next district. (David Soul played Hutch in the series; he and Glaser have small cameos here as well.)

The TV show was a buddy-cop drama; this version is a comedy, but sometimes it's hard to tell. Vince Vaughn shows up as a drug kingpin in a cheesy mustache. Snoop Dogg is streetwise informant Huggy Bear, whose line readings are awkward but who looks fabulous, with his Slim Jim physique, in a series of outlandish wing-lapelled jackets and psychedelic fur coats. Carmen Electra and Amy Smart play ditzy cheerleaders who have little to do but bounce around looking pretty.

Everyone in "Starsky & Hutch," with the exception of Wilson and Will Ferrell, who has a small role as an imprisoned biker baddie who likes to embroider in his spare time, looks vaguely lost. Stiller is occasionally funny. Starsky's deceased mom was a Bay City cop as well, and there's something gravely hilarious about the way he approaches her gravestone and lovingly lays a doughnut on top of it. But most of the time Stiller is simply trying too hard -- he gives the impression of delivering his performance through clenched teeth.

Ferrell, in his few small scenes, lightens up everything around him (particularly a sequence where he persuades Starsky and Hutch to impersonate mating dragons -- the sort of inane gag that deflates completely if you try to explain it). And Wilson is always a pleasure to watch. His lines come out as zonked-out afterthoughts, as if he were just coming up with them off the cuff. (Maybe, in this instance, he is.) Wilson has a casual loopiness that's enjoyable even when it's not assertively funny. Hutch finds himself in California-boy heaven when he lucks into a threesome with those two sultry cheerleaders, and the look on his face -- a mix of incredulousness and fun-loving entitlement -- is more dryly amusing than almost anything else in the movie.

"Starsky & Hutch" does get many of the details right, like the jazzy red-and-white Gran Torino that the two use to tear up the streets: For grown-up boys of a certain age, that car is iconic. But even as a nostalgia ride, "Starsky & Hutch" poops out before it ever gets going. Sometimes old favorites, even those that were never that good to begin with, can be freshened and reinvigorated. But sometimes even attempting resuscitation is pointless: Everything old is old again.