Do straight guys want to read a men's shopping magazine?

Do gay men? Does anyone? A close encounter with Cargo, the new Lucky for men. 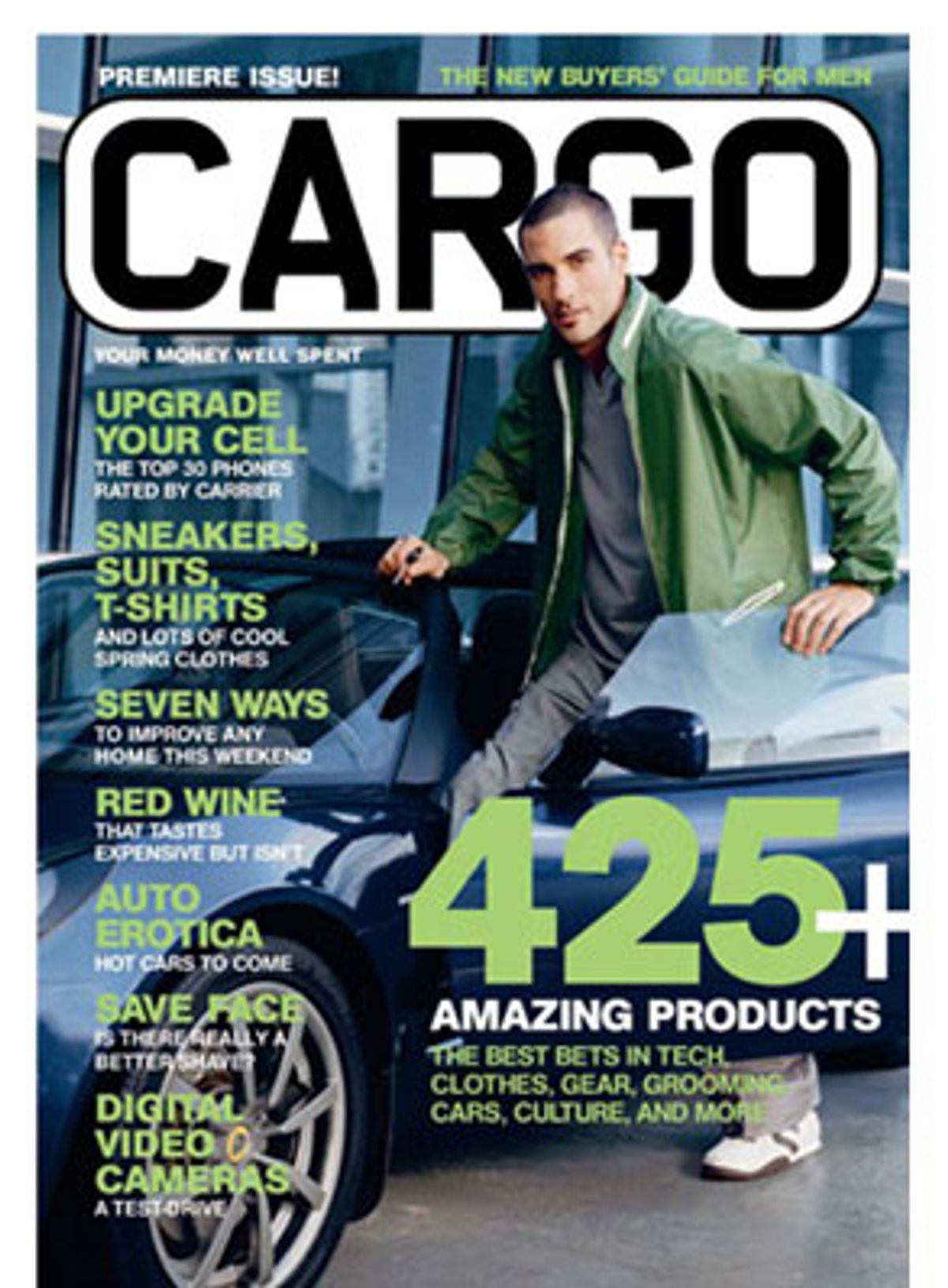 Running late as usual, my iPod and I practically bounced into Cafeteria (a trendy lunch spot in Manhattan's Chelsea neighborhood) a few weeks ago and into the embrace of my friend Shoshana. Taking a step back, Shoshana gave me the once-over, checked out my navy blue peacoat, black Too Boots shoes, dark blue Levi's, TSE white T-shirt, gray zippered cashmere sweater, olive scarf and protruding mp3 player and announced, "You look like a page out of Cargo."

A magazine publicist couldn't have scripted it any better -- Cargo, now on newsstands, wasn't even out at the time -- but to me, it was completely embarrassing.

A self-described "comprehensive buyers' guide for men covering everything from clothes and tech to cars and culture to grooming and gifts," Cargo is the first in a new crop of men's magazines aiming to be the XY answer to Lucky, the wildly successful women's magazine unapologetically devoted to shopping. Call it Lucky Bastard.

Hot on Cargo's heels, Ziff-Davis Publishing's Sync (for guys and their gadgets) will debut in June, while Fairchild's Vitals ("the upscale shopping magazine for men") unveils itself in September. Cargo and Vitals are hoping that the ubiquity of the "metrosexual" is more than just a tired topic for a trend story -- they're hoping it's an actual marketing demographic for advertisers to salivate over -- while Sync wants men to care as much about shiny objects as they do about rock-hard abs.

I should be the ideal reader for Cargo. Ten years ago, my idea of footwear was a pair of black kicks I chose because they didn't leave my feet too soggy in the rain. Now I receive a twice-yearly e-mail alerting me to my favorite sample sale (where I now know to arrive at 8:30 a.m., while the stock is still strong). I've learned that spending $12 on fancy shaving cream is a good investment, and have even come around to the notion that all white T-shirts are not created equal. I don't spend a lot of dough on clothes, but people tell me I have a distinct personal style. In short, I've come a long way, baby. But I don't want to look like a page out of a men's shopping magazine (or at least have people think I do). I've had plenty of help in my sartorial evolution, but I'd like to think I'm still an individual, not a poster boy for a piece of direct mail.

Which doesn't mean I wasn't curious to see what a magazine with the tag line "your money well spent" is all about. With an open mind I made my way to Cargo publisher Condé Nast's glitzy launch party. "Do you think they hired all these beautiful women to come to this party?" I overheard one guy say to his buddy. The publishers probably didn't -- but I'm pretty sure the guy wearing nothing but a white towel and pretending to be a statue shaving in front of a medicine cabinet stocked with high-end grooming products didn't just wander in off the West Side Highway. After a man in a pinstriped suit wearing a big fedora told me he loved my hair, I decided it was time to find a well-lit corner, park it and do some serious Cargo-loading.

Although Cargo's edit mix is at least half fashion and style, I'm more geek than groomer, so I turned straight to the gadgets section, "The Whole Shebang," which looks at cellphones in the debut March/April issue. It quickly became clear that CNET.com does a much better job of breaking down the gadget Americans purchase every 18 months, so I only skimmed the story. Having read men's magazines for more than a decade (not to mention actually being a man), I've got the shaving thing down, so the grooming column's "Baby Your Face" article didn't do much for me. "Buzz Off," about thinning out one's body hair, especially the point that "you may find a six-pack stashed under the bushes," was both kind of gross and so six weeks ago. While I plead guilty to once assigning and editing a story detailing the best way to bend your baseball cap (in a previous life as a men's magazine editor), I can't believe there are legions of men who will turn to Page 64 and sigh with relief that there is finally an explanation of the best way to roll up a dress shirt. Pieces on bangs (making a comeback!), nose-hair trimmers (choose the Tweezerman!), and breakthrough botox treatments (it's called Restylane and it's 100 percent synthetic ... which is a good thing) are just too embarrassing to read, even if no one's looking.

And sure, I like zip-up cardigan sweaters -- probably more than most guys I know -- and can afford a few of the ones modeled on Page 134. But will I really use the little orange stickers Cargo provides, like Lucky, to tag pages so I can locate them later? I just don't want to be the kind of guy who tags and returns. I agree with Cargo's 30-year-old editor in chief Ariel Foxman's comment to me that "all men need to shop" and that his magazine "speaks to men who like to shop and speaks to men who hate to shop," but I fear for myself and the republic if Cargo creates a nation of orange taggers.

"Women like to graze -- they enjoy the whole activity of shopping," says Michael Caruso, editor in chief of Men's Journal, who discloses that Foxman is a former assistant of his (from his Details days), whom he finds to be a bright guy and whom he hopes succeeds. "Men are still hunter-gatherers: If you need a shirt you go out and find a shirt. You buy a shirt and drag it home to your cave. And then you don't want to think about shirts until that one falls apart."

"I have to say, it just seems like the worst idea for a magazine in a while," says David Boyer, author of "Kings and Queens: Queers at the Prom" (Soft Skull). "I'm sure they've done plenty of research and there are no doubt guys out there who like to shop, but it seems to me it's a totally emasculating concept for a straight guy. An upscale gay shopping magazine, on the other hand, makes sense to me."

Foxman, who was plucked from the ranks of In Style magazine, says Cargo's readers aren't gay, straight or metrosexual, but "any guy in the market to buy something. He feels self-assured when he goes shopping and, with Cargo, has the proper tools to get what he wants."

That's all very nice, and possibly true, but the first issue doesn't feel like it's for anyone -- straight, gay, whatever -- in particular. The magazine isn't littered with half-naked babes in men's suits, bitchy queens telling straight guys how to behave, or hopeless geeks prattling on about the wonders of WiFi, but it doesn't read like a cool Consumer Reports, either. It's neither very gay nor very straight but rather fey, lacking a personality, as if the magazine truly wants to be all things to all people. As my friend Chris Harris, a 33-year-old married television writer in Los Angeles, says, "Finally, a magazine that's nothing but all the kinds of stuff I skip over in other magazines."

There may very well be legions of men lost in the suit racks at Macy's, who still don't know that a red rose means we're screwing and a yellow rose means we're not, and scratch their heads inside Best Buy, wondering whether TiVo is for them. Most guys I know, however, enjoy figuring out what they do and don't care about all by themselves. Those who don't have girlfriends who teach them most of what Cargo offers on fashion, grooming and culture. For guidance on gadgets, there's the Internet, Wired and the Wall Street Journal's tech guru Walter Mossberg.

"When I go to buy a digital camera, or a bottle of champagne, I think about cameras or champagne then," says Dan Hoffman, a 32-year-old CEO of a small telecom company in Manhattan. "I'll go out and research then, and wish magazines like Cargo had good searchable databases. Why waste time and money reading this stuff passively?"

Guys get a style and they want to keep it forever. The fashion industry thrives on the notion that you need to change your wardrobe every season, but the straight guys I know just find something they like and stick to it.

Every time my father passes a Rexall drug store in any part of the country, he goes in to search for the one perfect comb that was discontinued eons ago -- and I swear on my Cargo that he's been doing this for two decades. Now I find myself returning to a shoe sample sale looking for that style I bought the first time, wore out, bought two more times, wore out, and then realized was no longer available. Distraught over what I had thought would be the last type of casual shoes I would ever have to buy, I asked the designer if they were coming back. "It's time to move on," he said with both sympathy and authority. I know he's right. But I also know my dad will continue to search for the Holy Grail of $1.50 combs until he can comb no more.

Recounting my Cargo moment with Shoshana at Cafeteria to my girlfriend, she gave me her own once-over, noting the coat, scarf, sweater, T-shirt and jeans, and said with authority, "You do realize that except for the iPod, every single part of your ensemble was directly or indirectly due to me."

That's when it hit me: Some straight guys will read Cargo ... the ones without girlfriends.