She looked great with small breasts, I told my plastic surgeon buddy as he pumped up his patient's implants. Hey, it's Vegas, he said -- there's no such thing as too big. 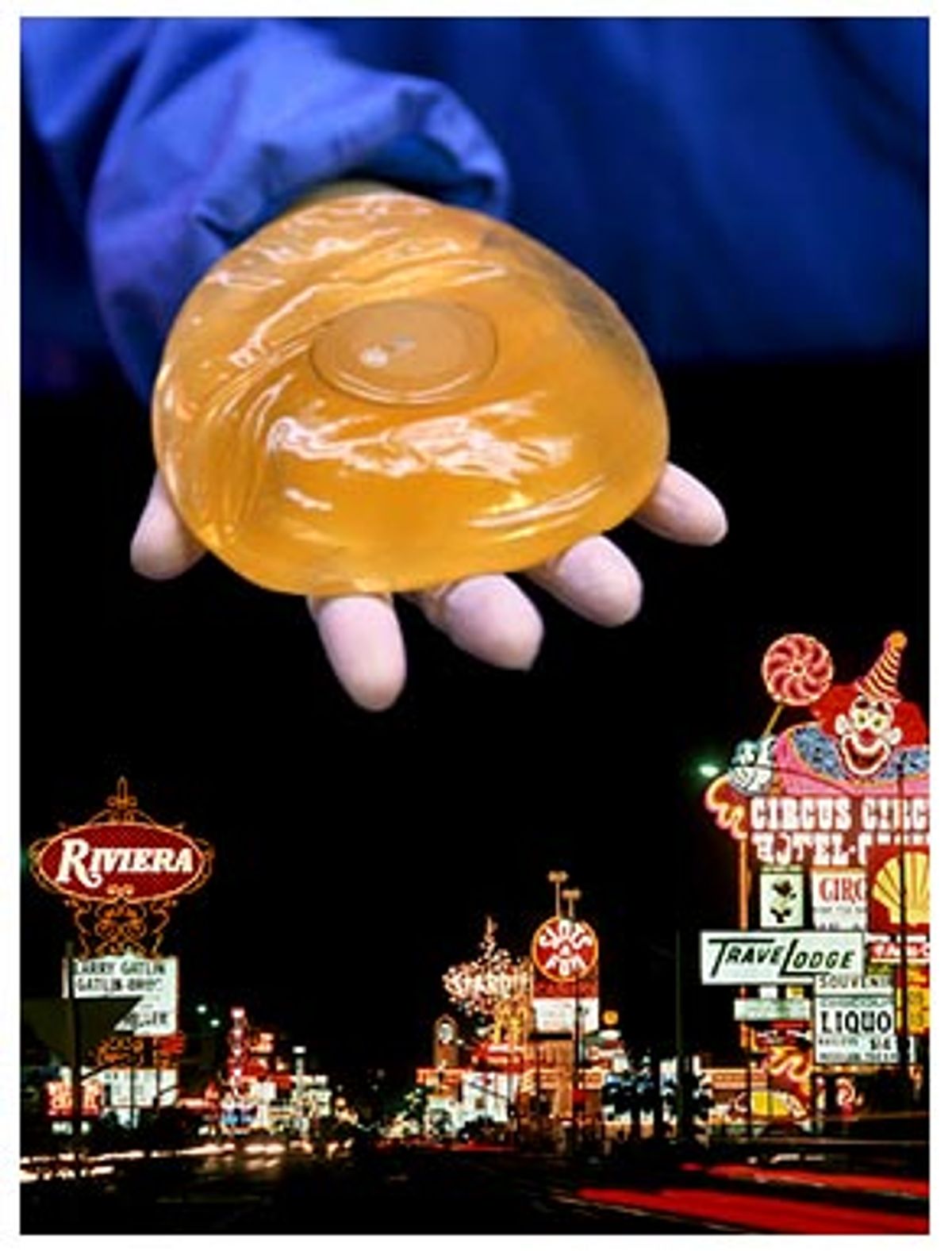 I took time off from my pediatric E.R. job to visit my old medical school roommate last March. John spent years in clinics in Los Angeles and New York polishing his innate surgical skills and artistry; now he had a nice, private practice group in the golden desert. While watching Sheena Easton belt out her catalog at a cozy spot in the Hilton he invited me to visit his outpatient surgi-center to watch him operate the next day. Thus, I found myself at the brilliant -- but, for a tourist in Vegas, odd -- desert hour of 7:30 a.m., hustling through a remote corner of town. By the time I arrived, Frank Sinatra was crooning in the background and John had halfway dissected his first breast of the day. (Both women operated on have given permission to have their surgery described in this story.)

"Welcome to Vegas, pal," he told me, the first of many times to come. "This girl's got bad ptosis -- her breasts droop," he explained, nodding over his shoulder to a laptop displaying an image of the patient's deflated breasts. "But watch a few minutes and see what happens."

The face of the woman lying on the gurney was concealed by a surgical drape, exposing only her torso's upper half, washed in a brown, drying betadine and a line of purple marker outlining the mammary border. Her face had similarly been cut from the photo behind us. She seemed to have a raw smile under her right nipple: lips of yellow and red fatty tissue bordered by a white, fibrous rim of tissue. Mary, the nurse opposite from John, held the edges apart with pencil-sized skin retractors, while John's fingers and instruments cleared a path through the fat to the shelf marked by the pectoral muscle below and bosom proper above. He uttered a small "tsk" and the anesthesiologist popped his head up.

"She's a bleeder," John said, zapping the blood vessel with a Bovie, a knife that electrically cauterizes small veins or arteries. An acrid smell of burnt flesh rose up along with the white plume from inside the surgical wound. "Twenty-five years old and five pregnancies. All that back and forth on her tissues wiped out a lot of the suspensory ligaments and created a lot of overgrown blood vessels." He chattered on about how she was really a bubbly gal, great personality. Sweet kids.

John and I roomed together for three years during med school. His hair has thinned (a little) and gone gray (a little more than mine) over the years, but his eyes still twinkle and gleam. John's conspicuously sunny character came straight from a big heart, and we all had pegged him for a family practitioner, or possibly an oncologist where such instincts prove most valuable. He surprised his friends and classmates by steering toward a specialty notable for gilded charms and a callow clientele, but seeing him at work, it became clear that his love for patients and primary dedication to good care hadn't faded or been traded away en route.

John nodded to Mary, who passed over an empty IV bag with a tube sticking out at one end. "The sizer."

John slid the folded plastic bag into the hole he had just made and connected the tube to a 2-ounce (or 60 cc) syringe. He pumped once, and the breast gently rippled as the bag unfolded. With the second hit, the markered, browned and blood-stained bosom sprang to life. A third hit, six ounces filling the bag now. Another valley burgeoned with the fourth. He went a fifth time and now the breast bordered on the grotesque.

He was ready for a sixth push on the syringe and I envisioned exploded blood and bosom flesh splattering the walls. "John!" I protested, "she was fine at three!"

"She wanted big," he reminded me. "This is Vegas."

"They go for medium in the Midwest," Mary said, "but around here you can't make them too big."

"When I see them post-op, the only complaint I ever hear is that I didn't make them big enough," John said. I shook my head in disbelief. He delivered the sixth barrel and her chest resembled nothing so much as a beach ball lying by a blanket on the sand. "Just wait a little. It'll actually turn out pretty nice," he assured me. He used saline implants rather than silicone because it gave better results: fewer ridges or pits and a more natural look over the long run.

He laughed and elbowed me in the ribs. "You'll see. Artist at work."

Opening up and sizing the next breast took another 30 minutes. But then, upon breathing the same 12 ounces into the second breast and watching it bloom, despite the muddied skin discoloration, skewed purple lines and yawning gashes below the areolas, the skill of his conjury revealed itself.

The hanging sacs, those limp rags in the picture on the laptop, had transformed into a pair of hooters.

John's partner Steve Miller stepped in to see how things were going. The day before, they discussed the intricacies of the multiply-pregnant, deflated breast and how best to return its youth and sprite. Looking over the handiwork of his partner, Steve nodded in appreciation and offered a word of advice. "Dig her out on the right a little."

John stepped around to her right, snugged his fingers between skin and balloon and burrowed up toward her armpit. I could see the silhouette of his fingers crawling up inside the breast tissue like a fat caterpillar. I must have made an alarmed face: "There's almost no limit to how much the skin stretches," he explained. When John was finished digging, he smushed the implant upwards and stepped back again.

Steve and John stared and nodded without saying a word -- John with arms folded, Steve rubbing his chin.

"Mary -- squeeze them, please," John said. Mary went over to the girl in the controlled coma and very delicately pushed the breasts together to form a deep décolletage.

The surgeons watched coolly for a second, then John walked up and slid a pinky into the left breast. The right side had pillowed into a graceful arc, but the left had the faintest dimple, which he pooched out in a moment.

Mary reached over onto the instrument tray and picked up a towel, dipped it in saline and washed the chest clean.

John had sculpted a flawless pair of knockers, round and bursting in the full glory of rejuvenation. He deflated the air-filled bags and the breasts collapsed back into their original formlessness. In less than three minutes, he had the sizers out and the permanent implants in place, which he filled with precisely recorded volumes of saline. In another five minutes he had both incisions sewn closed so as to be almost invisible. The patient recovered from anesthesia and was discharged before I could see her face.

The next girl and I exchanged some small talk before her surgery. John worked over her chest with his purple marker, outlining where his fingers should and should not roam in search of the perfect cavity.

Since she was smaller and firmer than the first patient, with delicate, almost indistinct nipples, I asked John -- a few minutes later in the operating room when the patient was under -- if he ever turned down patients on aesthetic grounds. "She's really pretty in a small," I said. I looked down again at her supine form. "It's a good look for her."

John picked up his Bovie again and went back to his patient. "And it is Vegas." Then he went on about how she, too, was a bubbly gal with a great personality. The sweet kids, the works.

"She'll have a lot more personality now," I answered lamely.

Mary gave me an irritated look, the kind a mom might give to a particularly dense teenage son. "Or maybe a better paycheck or bigger tips. Or a rich Texas boyfriend. These things pay for themselves pretty quickly."

The surgeons don't do too badly, either. I told John about surgeon friends in the East, especially the OB-GYN guys, getting squeezed between slow, stingy payments from insurance companies for services performed and the crushing hikes in malpractice premiums. He confessed that while the cash-'n'-go nature of his work made it easy to keep doing these simple procedures day in and day out, he missed the more interesting, complex reconstructive cases he used to do at teaching hospitals. "I know it sounds like crying all the way to the bank, but there's just not that much delicate work to do out here." (One year later John has, in fact, remodeled his practice to attract a broader set of reconstructive procedures.)

An hour later, after both balloons were inserted, filled, balanced and molded just so, I again had to salute John's handiwork.

"Alright, already," I conceded. "Now she's a knockout! But she was still great as an 'A.'"

Mary slathered antibiotic ointment over her fresh scars. "You try getting by with tiny boobs in this town," she said. She proceeded to wrap the newly puffy bonbons in a wide bandage. When she was done, her patient looked like she was wearing a tight tank-top. John and his partner talked complications, short- and long-term, as they pulled off the sterile outfits. Infection and post-op bleeding are rare, easily managed problems in the first few days after surgery. For some women, unhappiness with the results are tied to body image and life dissatisfaction, issues which are inextricably linked to the motives that brought them to a plastic surgeon in the first place. Both surgeons acknowledged the inevitable fact that one day a discontented patient was going to take them to court, and nothing but the unscientific, unquantifiable measure of "happiness" was going to be at stake.

The woman woke up from her sleep and, still loopy and disoriented, instinctively reached for her dressing. She started to tug at the wrapping in order to get a look. "Aaaaa-aaam I dunnn? Am I dunnnnn?" She managed to hook a thumb into the top and pulled downward.

Then she emitted an excited but low, guttural chuckle.