Is everyone who fails to follow Bush guilty of "appeasement"? 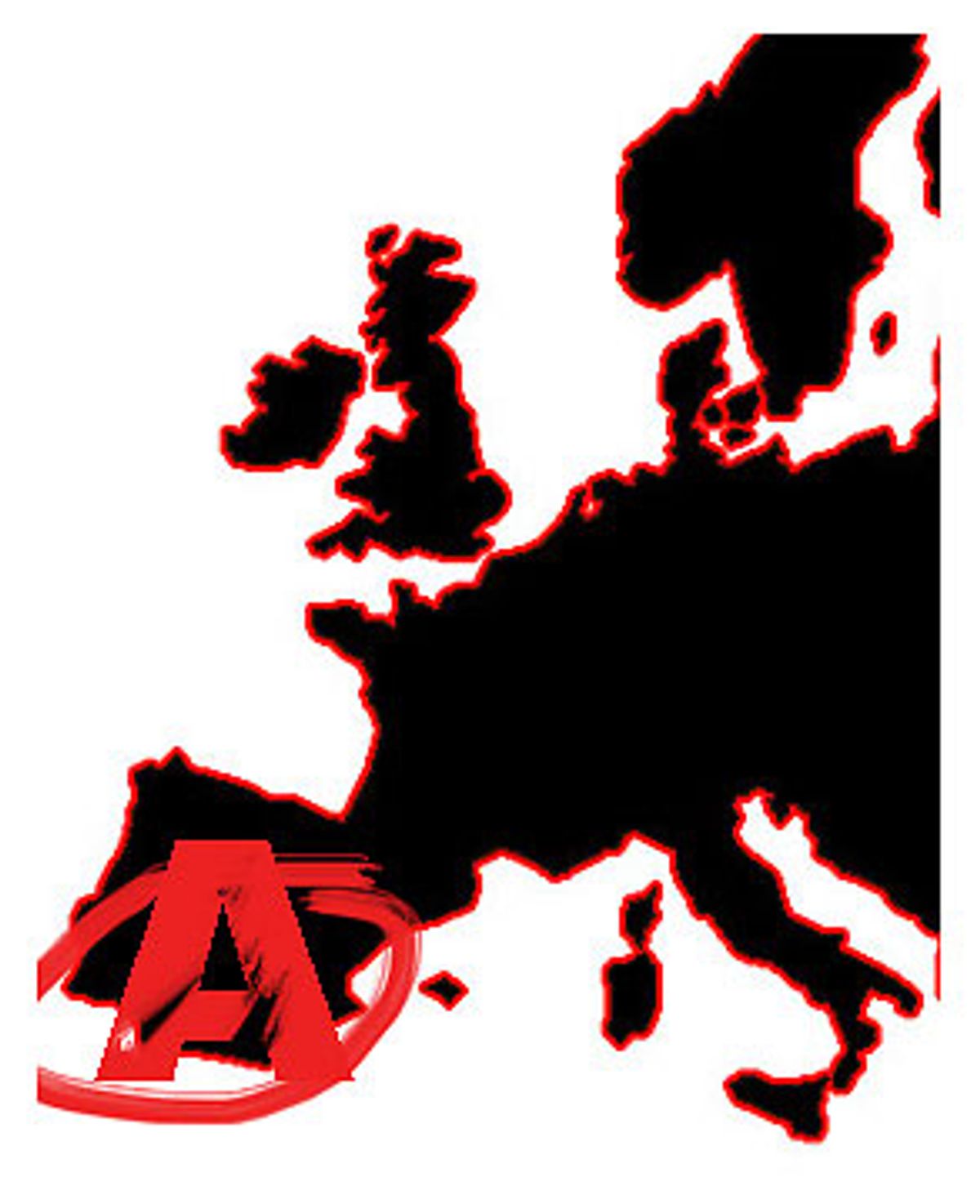 The day after the Madrid terror bombing, the neoconservative press -- should we call it the "neocontern"? -- rushed to offer its cloying embrace to Spain. "We Are All Spaniards Now," proclaimed the New York Sun. Of course, the real object of the neocon word blitz wasn't to soothe the Spanish, but rather to propagandize Americans; the neocons don't really care about Spain. Instead, the real target of their faux internationalist solidarity was the home audience, who might be starting to suspect that "Operation Iraqi Freedom" is boomeranging.

On Sunday night, even as the election returns were coming in, Andrew Sullivan blogged an item titled "Bin Laden's Victory in Spain." He argued that al-Qaida had "removed a government intent on fighting terrorism and installed another intent on appeasing it." By Monday afternoon, it seemed "clear" to Sullivan that "the trend in Europe is now either appeasement of terror or active alliance with it. It is hard to view the results in Spain," he continued, "as anything but a choice between Bush and al-Qaida. Al-Qaida won." Meanwhile, in National Review Online, David Frum disdained "the new Spanish government's swift and abject surrender to the attackers."

Evidently we're not all Spaniards anymore.

Christopher Hitchens in Slate.com jumped right in, slamming Spain as the new France. And we know about those frog-eaters: "French schools should make all haste to permit not just the veil but the burqa," Hitchens mocked. But as he lanced at the straw man of pusillanimous Euros trying to buy off Islamo-blackmailers, he neglected to note that the French are doing just the opposite of what he accuses them of. It's the "weak-kneed" French who have banned the veil in public places; indeed, several other "Old Europe" countries are tough-mindedly considering similar prohibitions against Muslim garb.

So maybe the Europeans aren't weeny weasely "appeasers" -- the neocons' favorite slur word -- after all. Maybe the Europeans have learned from the failure of the Crusades and of colonialism; maybe they haven't allowed a blur of pamphlets from the American Enterprise Institute to blind them to the impossibility of remaking a whole region by force.

But don't tell David Brooks of the New York Times, who shifts the blame for Spain's election defection away from his neocon allies and toward -- get this -- Colin Powell. "Why hasn't Colin Powell spent the past few years crisscrossing Europe so that voters there would at least know the arguments for the liberation of Iraq?" asks Brooks, blithely assuming that the Europeans know too little, rather than too much. Actually, as demonstrated by the still sliding numbers in the latest Pew Center survey of international attitudes, Europeans increasingly see W. as a pyromaniac fireman, spreading the flames he claims to be extinguishing.

So how will Spain manage without the Bush Doctrine? If having troops in Iraq was a guarantor of safety, do the neocons think that the Spanish erred in not deploying enough of them? By the logic that Bush used after 9/11 -- attack a country that didn't attack the U.S. -- maybe the Spanish should find their own bystander nation to attack. Morocco would have been an obvious choice, except that Moroccan nationals did actually kill Spaniards on 3/11. Tunisia, a complete bystander of a country -- like Iraq on 9/11 -- might do instead. And of course, the always eager Sullivan points toward Iran, Syria, Pakistan and Saudi Arabia. But for Brooks, it is unthinkable to admit that Spanish voters, hearing explosions echoing in their capital, might conclude that Spain's signing on to the Bush Doctrine was, in effect, a declaration of war -- and in war, people on both sides get killed.

So who lost Spain? Who thereby gave Old Europe a new lease on life? When Americans were told that toppling Saddam's regime would transform geopolitics, did anyone think that the next transformed regime would be José María Aznar's -- that "regime change" would ricochet back to Spain? The Bush administration was taken by surprise, of course, because it had chosen to ignore the huge majorities in democracies around the world who never agreed that the "war on terror" could be won in Baghdad.

President Bush pushed the Spanish -- and will soon push, probably, the British -- to change their government by pursuing policies that have cleaved Europe and America. Europeans, remembering centuries of experience in stomping out separatists, anarchists and fanatics, will now go their own way, without guidance from Paul Wolfowitz. French President Jacques Chirac and German Chancellor Gerhard Schroeder, looking like two cats who shared a canary, held a joint press conference in Paris on Tuesday touting their own approach to fighting terrorism; there they offered words of welcome to incoming Prime Minister José Luis Rodríguez Zapatero, inducting him into their non-American -- maybe anti-American -- alliance. David Frum bewailed Europe's collective-security plan as "a defeat for the antiterrorist cause," and yet Western Europeans have concluded that stirring hornets nests in faraway places is not the way to keep from being stung.

Which brings us to Tony Blankley in the Washington Times, who gloomily projected a "four in 10 chance that the American electorate will come down with the Spanish disease this November" -- that is, boot Bush out of office; the alleged ailment might be called "appeasementitis." Yup, it's 1938 all over again, same as it ever was. The historically minded -- here comes the dreaded alternative diagnosis of the realists -- might point out that al-Qaida is a criminal gang, a cadre of loony loners and conspiratorial crazies scattered across the world. These realists understand that bin Laden's bunch is not a nation-state with a Wehrmacht, Luftwaffe, and Fuhrer. But no speck of realistic thinking seems ever to cloud the eternal 1930s-ness of the neocons' spotless mind.

Indeed, the most serious consequence of appeasement-accusing is the assumption that goes with it: That counterterrorism strategy and conventional war strategy are one and the same. The war on terror is not World War II; it requires dramatically different actions. The neocon strategists, stalled in the '30s -- searching for Neville Chamberlain tapping his umbrella on every cobblestone street, even as they scout out the next Winston Churchill -- are leading us into the bloody land of blowback.

By Thursday, the New York Times' Tom Friedman weighed in, denouncing the Europeans as -- what else? -- "the Axis of Appeasement." In a tone of desperation, he called the present "the most dangerous moment we've faced since 9/11." He espies the neocon house of cards collapsing: The democracy transplant has failed, civil war looms in Iraq, our allies have turned into appeasers, and Bush is still bollixed up in "his discredited argument for the war" -- those phantom weapons of mass destruction. So Friedman pipe-dreams of troops, thousands of fresh troops -- as if there could ever be "enough armored cars, cell phones, bulletproof vests" poured into Iraq to force that country into becoming a pro-American democracy. Friedman sprays blame at the Pentagon, the Bush team, low taxes and Spanish voters, but never at the flawed enterprise itself. Those who doubt the master plan must be silenced with charges of "dishonor" and, of course, the A-word -- "appeasement."

Yet the plain truth, which the neocons keep trying to purge, is this: Bush's war in Iraq was bad strategy, if the enemy is al-Qaida. And the search for a better strategy isn't cowardice, appeasement or surrender.

Maybe Bush-bamboozled Americans will figure that out when bin Laden is finally nailed and nothing changes.

James P. Pinkerton is a columnist for Newsday. From 1979 to 1984, he worked in the election and reelection campaigns of Ronald Reagan and in the Reagan White House.