Bush's national security advisor dodged the 9/11 commission, but she can't evade its judgment. 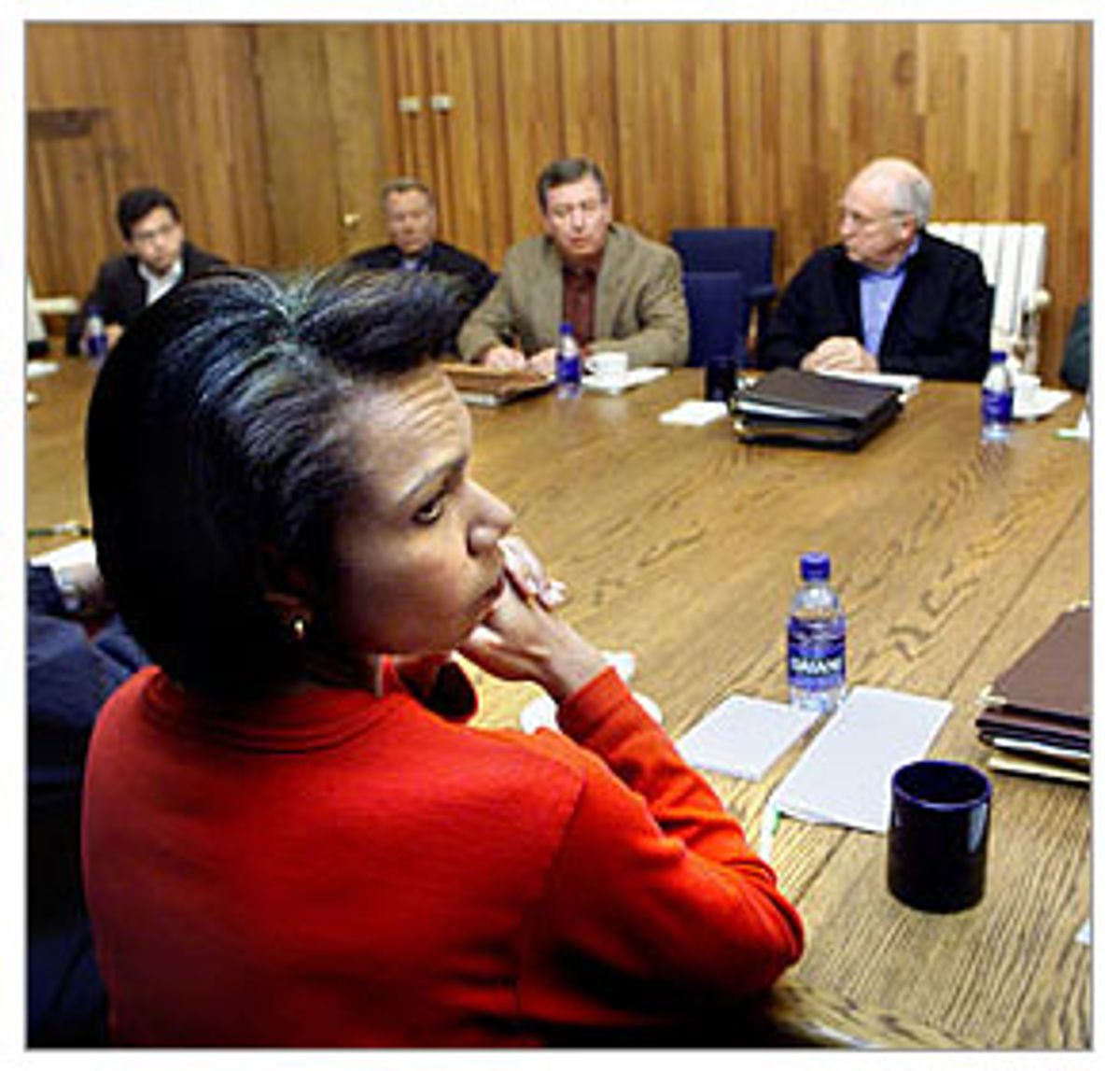 It was a catastrophic Wednesday for Condoleezza Rice, the worst of her more than three years as national security advisor.

First, the Bush administration's former counterterrorism chief, Richard A. Clarke, told the commission investigating the 9/11 terrorist attacks that only a week before the attacks he had sent Rice a powerful and prophetic letter warning of the danger that hundreds of Americans could die in a terrorist strike.

"You urge policymakers to imagine a day after hundreds of Americans lay dead at home and abroad after a terrorist attack and ask themselves what else they could have done. You write this, seven days before 9/11?" former Democratic Rep. Tim Roemer asked Clarke in a nationally televised open session of the commission.

Clarke tersely confirmed he had sent the letter with a single word, "Yes."

It is a matter of record what Rice did on receiving this warning from her own top expert on the imminent mega-terrorist threat facing the United States. She did nothing.

The commissioners had more bad news for Rice. They were highly critical of her refusal to face them in public and testify openly about the Bush administration's counterterrorism policy, even though she has actively defended it on television and in the Op-Ed pages of the Washington Post.

Even the prominent Republican commission chairman Tom Kean, the former governor of New Jersey, was obviously irritated. "We are disappointed she is not going to appear to answer our questions," he said.

Commissioner Roemer was equally scathing. Rice's argument "belongs not on the airwaves" but in testimony before the commission, he said.

Clarke's dramatic letter, coupled with Rice's devastating refusal to risk appearing publicly to defend her record, may do what nothing else has done to strip the Teflon off Rice's questionable record as national security advisor.

It came in a week that started badly for her two days ago and only has gotten worse since.

The furor over Clarke's explosive new book, "Against All Enemies," about Bush administration incompetence and irresponsibility before and after 9/11, has so embarrassed and alarmed Rice that Monday she took the almost unprecedented step of responding to criticism publicly with a signed article on the Op-Ed page of the Post.

The article is a masterly example of evasion, answering accusations that have not been made and neatly avoiding troubling ones that have. Rice was briefly allowed to enjoy the perception that she had answered criticisms, even though she had not. But within two days, a claim she made in the Op-Ed was disputed head on.

For on Wednesday, commissioner Jamie Gorelick, the former deputy attorney general, asked Clarke, "When Dr. Rice writes in the Washington Post, 'No al-Qaida plan was turned over to the new administration [by the Clinton team when it left office],' is that true?"

Clarke again replied with a devastating single-word answer. This time it was: "No."

And he had the chapter and verse to prove it.

In her article, Rice further claimed that through the summer of 2001 "increasing intelligence chatter" focused almost exclusively on potential attacks overseas. But this presumably was only true of National Security Agency intercepts. She acknowledges that U.S. officials realized that the potential for some kind of imminent airline hijacking operation was very real. She admits in the same article that the Federal Aviation Authority "even issued a warning to airlines and aviation personnel that 'the potential for a terrorist operation such as an airline hijacking to free terrorists incarcerated in the United States remains a concern.'"

That part is obviously true, but of course it neatly sidesteps the real issues. For its full first eight months in office, the Bush administration never took seriously the threat of any kind of al-Qaida terrorist attack, let alone a mega one within the continental United States.

This complacent blindness toward the threat of al-Qaida continued right down to the wire. On Sept. 9, 2001, Defense Secretary Donald Rumsfeld told senators on Capitol Hill that the president was prepared, with his approval, to veto their efforts to shift $600 million from his precious anti-ballistic missile development to counterterrorism security precautions. Rice did not object.

Rice is, in fact, a classic example and beneficiary of the political mores of Bush's Washington. In the second Bush administration, to a degree unprecedented among any of its recent predecessors, Democratic or Republican, courtier skills matter far more in rising to and prospering in high political office than political skill, sagacity or knowledge of the issues. Being too attached to any principles or prudence will assuredly mar or destroy your career if they get in the way of key policy goals -- like blaming Iraq for 9/11, or backing the drive to conquer it. Rice has thrived in this environment.

Rice had neither academic background nor serious policy experience in dealing with the Middle East, terror groups or extreme Islam. She was the top national security official on watch for eight months before 9/11. As Clarke has made clear, that should have been ample time for her to ratchet up the national government's level of alert and efficiency against the well-documented threat about which she had been exhaustively and presciently warned. She did no such thing. Instead, she has used her first-rate forensic and diplomatic skills only to obfuscate, excuse and sidestep to protect Bush and maintain her own perfect record. In the year and a half since 9/11 Rice has compliantly served the personal obsession of the president and the neocon clique running the Pentagon to rush to war in Iraq.

Her unimpeded rise is especially remarkable because Rice's actual record as national security advisor has been, to say the least, spotty and controversial.

Indeed, the record of her failures and coverups is deep and long. Arguably, one has to go back to McGeorge Bundy and the Vietnam War to find a national security advisor with one half as bad a record. Clarke's new book, "Against All Enemies," adds further documentation to the record that Rice was blasé and unconcerned about the al-Qaida terrorist threat before 9/11. She received serious warnings about it, as Clarke has documented, from the outgoing Clinton administration and from Clarke personally. But she did not take them seriously and took no action to maintain the level of priority, let alone upgrade it.

Rice received clear warnings about the imminent nature of the al-Qaida threat of planning terrorist spectaculars against the U.S. homeland as late as Aug. 26, 2001 -- only 16 days before the attacks took place.

Now, Rice and her team are working overtime to deny, discredit, or at least blur Clarke's testimony. Stephen Hadley, Rice's deputy on the NSC, has flatly denied Clarke's allegation that the Bush administration ignored the ominous intelligence chatter in the summer of 2001. "All the chatter was of an attack, potential al-Qaida attack overseas," he told CBS' "60 Minutes." Bush, Hadley maintained, "got concerned about whether there was the possibility of an attack on the homeland. He asked the intelligence community: 'Look hard. See if we're missing something about a threat to the homeland.' And at that point various alerts went out from the Federal Aviation Administration to the FBI saying the intelligence suggested a threat overseas ... So the president put us on battle stations." Hadley then insisted that Clarke was "just wrong" in stating that the administration did not go to "battle stations."

However, Hadley's veracity was demolished by "60 Minutes'" Leslie Stahl, who confronted him with two independent witnesses who had testified that another encounter Clarke described with the president had actually happened -- that Bush on Sept. 12 demanded that Clarke find evidence of Iraq's involvement in 9/11 -- even though Hadley denied that the incident took place.

After 9/11, Rice went along enthusiastically with every effort by Deputy Defense Secretary Paul Wolfowitz -- and his fellow neoconservative hawks running the Department of Defense -- to demonize Iraq and its leader Saddam Hussein as the masterminds or key allies behind al-Qaida. She did not raise a single objection to their obsessive drive for war with Iraq, even though this automatically meant shifting enormous U.S. materiel and intelligence resources away from the priority goal of hunting down and destroying al-Qaida.

Rice's role was especially egregious on the issue of the entirely false report that Saddam Hussein had sought "yellowcake" uranium in Niger. On Jan. 23, 2003, she published an Op-Ed piece in the New York Times titled "Why We Know Iraq was Lying," in which she claimed Iraq's then-recent declaration of weapons "fails to account for or explain Iraq's efforts to get uranium from abroad." Five days later, Bush included the bogus allegation in his State of the Union speech. On June 8, 2003, Rice admitted on ABC's "This Week," "Clearly that particular report, we learned subsequently, was not credible." On July 9, 2003, then White House press secretary Ari Fleischer admitted, "This information should not have risen to the level of a presidential speech."

At no point has Rice played the wise and moderate "vicar" of national security policy, reining in the neocons and playing the moderate but crucial "swing" role between neocon hawks and old internationalist veteran Republicans in the administration. On the contrary, she has repeatedly opposed and undermined that "moderate" wing, led by Secretary of State Powell and his right-hand man, Deputy Secretary of State Richard Armitage, at every stage.

Her confounding of Powell did not start after 9/11. It has been true from the day the Bush administration took office. And it was largely overlooked for a variety of reasons, all boiling down to the same root cause. Even more than Wolfowitz, who affects a moderate, low-key gentlemanly demeanor in public but whose memoranda and policy papers have been notorious over more than a decade for their wild and risky recommendations, Rice always appears ladylike, low key and genteel. Her demeanor and charm are always impeccable. And this belies the reckless overconfidence of the policies she has in fact supported.

Will any or all of this come back to haunt Rice? If the president wins reelection, it certainly will not. Her access to Bush and her standing in his eyes remain unparalleled. As James Mann noted in his excellent new book on the Bush foreign policy team, "The Rise of the Vulcans," Bush has always felt more comfortable with Rice than with Wolfowitz. Bush and his political strategist Karl Rove still love the idea of countering their almost universal rejection by black America by having a black secretary of state. Since Powell has made clear he does not wish to endure a second term of consistent isolation, backstabbing and undermining, that leaves the way potentially clear for Rice to fill his chair.

The way therefore remains open for Rice to follow the path pioneered by her predecessors Henry Kissinger and Colin Powell in ascending from the National Security Council to become secretary of state. Former House Speaker Newt Gingrich, a close buddy of Rumsfeld and associate of the neocon hawks who urged the invasion of Iraq, and who is a member of the Defense Policy Board, has salivated after the job, but his star has dimmed. Until the revelations and accusations this week, Rice seemed sure to face little competition in a second Bush term to be the second black and second female secretary of state. Now, however, it is a different story.

No wonder, therefore, that Richard Clarke now faces the same immense attack machine of discrediting that has been used on others like Paul O'Neill and Joe Wilson before him. For the president and Rice in their ambitions are joined at the hip. Clarke has hit them both where it hurts them the most. They must stand their ground, discredit him or politically bleed. In the face of this stark choice, no moderation or compromise is possible.