Will John Kerry's fellow Catholics turn out for him the way they did for the last JFK? 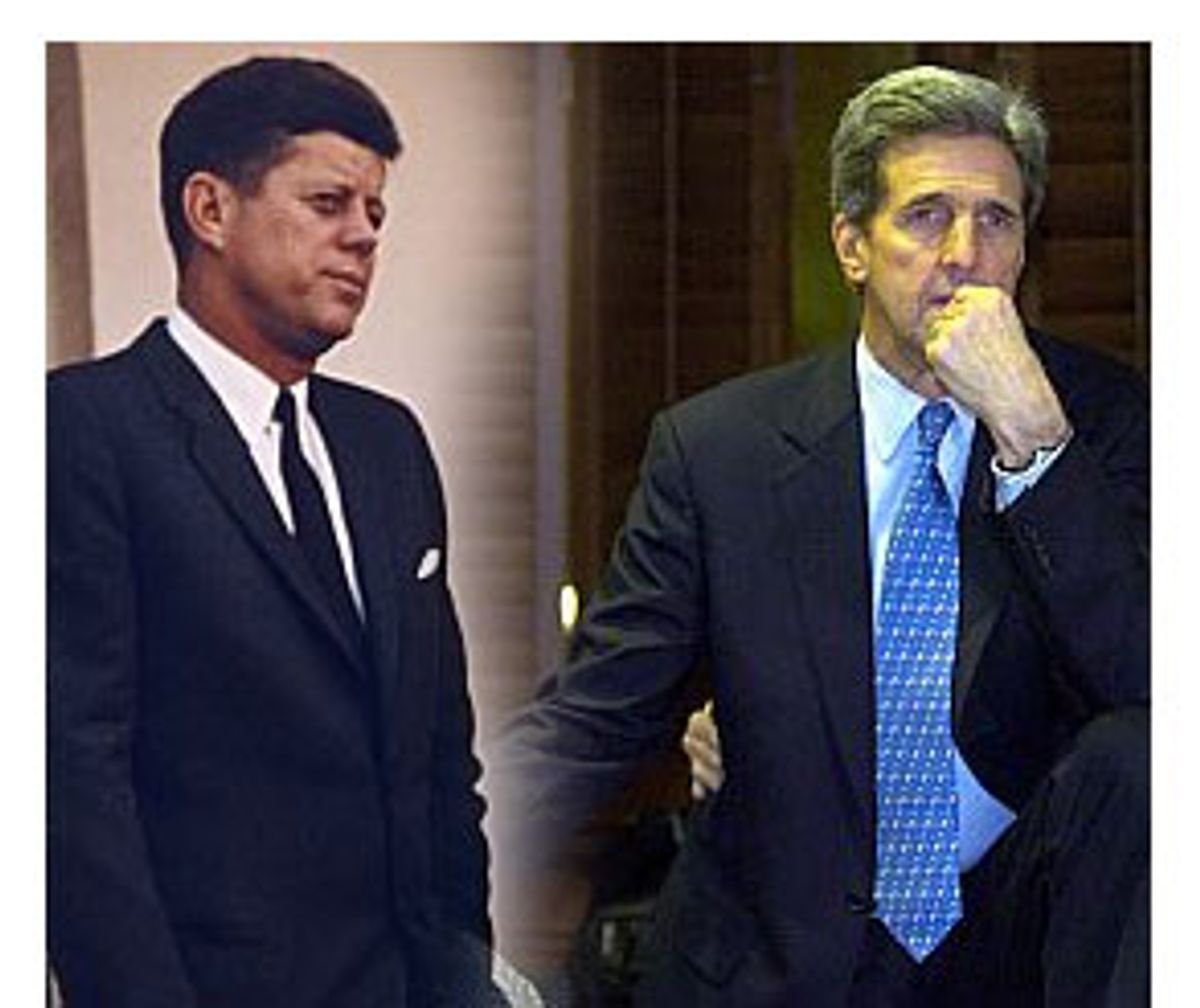 It has been 44 years since a Catholic ran for president. In 1960, more than two-thirds of the Catholic population voted for John F. Kennedy, providing him with the slight margin of 110,000 votes over Richard Nixon. According to the National Election Study of the University of Michigan, Kennedy had lost 5 million votes because of his religion.

Once again, a JFK is running for president, but Kerry represents a one-person balanced ticket: He's Jewish and Protestant in ancestry, Catholic in religion. Will Catholics again vote for him in overwhelming numbers? The answer, I think, is that they will surely be more likely to vote for him than white Protestants -- because Catholics are more likely to vote Democratic in presidential elections than are white Protestants. There is some chance of a bump of a few percentage points because Sen. Kerry is "one of us," but not a landslide as when the issue was whether a Catholic could ever be president. There are, however, a couple of factors that could change this picture.

The miasma of folklore and mythology about Catholic voting is so thick that it is difficult to persuade the liberal elite who dominate the Democratic leadership that Catholics are still Democrats. Ever since the McGovern "Reforms" and the ejection of AFL-CIO president George Meany and Chicago Mayor Richard J. Daley from the 1968 Democratic Convention, this elite has always assumed -- often, it has seemed to me, with a sigh of relief -- that because Catholics are politically conservative, pro-life and anti-gay, they would vote for Republicans.

When asked whether Catholics would vote for Jimmy Carter in 1976 because of his "stand on abortion," Mayor Daley stared in bemusement at the reporter and observed, "They don't vote that way." Yet in every presidential election since, pundits have suggested that the issue will win Catholic votes for Republicans. There is no evidence that attitudes on the legality of abortion among Catholics are any different than the national averages. Moreover, recent research indicates that Catholics are more sympathetic to gays and lesbians than Protestants. Myth, however, does not yield to evidence.

My sociological colleagues Jeff Brooks and Clem Manza have done the definitive work on "religious realignment" since 1950. "Realignment," in their work, is a movement of a religious group from one party to the other in its presidential vote, above and beyond the shift in the whole population in a given election. They report two actual realignments -- one a move from Republican to Democrat for liberal Protestants, and another from Democrat to Republican for evangelical Protestants. With the exception of the Kennedy "bump," Catholics continue in the same pattern of being more likely to vote for a Democratic president than white Protestants, given the general shift one way or another in a specific election.

Almost immediately the protest is raised: What about Reagan? The majority of Catholics voted for him, didn't they? The question deserves the same bemused expression the reporter earned from Mayor Daley because the questioner didn't listen to what was said in the last paragraph. The whole population shifted to President Reagan, but Catholics did not shift disproportionately. They were still more likely to vote for his hapless opponents than were white Protestants.

The Manza/Brooks work demonstrates a long-run continuity in voting patterns among most American religious groups. This is not surprising given the fact that political affiliations are made early in life and are consistent across generations. Unfortunately, there are no eye-catching headlines to be made of such findings. Dogs, it would seem, are still biting men instead of vice versa.

Yet in fact, even if most journalists and election consultants are too caught up in their clichés to notice it, the 2004 election may well be more dominated by religion than many recent contests. The basic issue is whether the religious hard right will continue to maintain and expand its control of the country.

Where do Catholics stand in this situation? As far as one can tell from the available data, they continue to be left-of-center, not as far left as black Protestants or Jews, but still further left than the Protestant majority. They were more likely than white Protestants to support President Clinton during the Evangelical crusade to get rid of him, more likely to oppose the Iraq war (as they did the Vietnam War), more likely to support social legislation -- more likely, in other words, to manifest the communal orientation that comes from their religious perspective.

It is difficult to tell where they stand on candidates and issues at present, because someone has legislated a ban on religious cross-tabulations in survey results. Apparently politically correct journalists and editors think that, since religion shouldn't influence politics, it therefore does not. To admit that it might would be like a violation of the separation of church and state. One has to wait till the exit polls become available to find out what happened. Presumably the boutique polls for the candidates do provide religious cross-tabs. One hopes so. Otherwise the candidates are working in the fog of political correctness: Catholics and evangelicals don't exist because they shouldn't exist.

Finally, one is reduced to guessing. If I'm forced to guess, I would say that Catholics are between 10 and 20 points more likely to vote for the current JFK than are white Protestants. Maybe there will be an additional 5-percentage-point bump because Sen. Kerry is one of us.

There are two wild cards, however -- the bishops and the Latinos.

Some bishops, perhaps ambitious for Vatican approval, have announced that they will deny the sacraments to Kerry because of his attitudes on abortion and civil unions for gays. It may seem odd that men who have lost all credibility and respect for the sexual-abuse mess they have created are willing to expose themselves to the charge of blatant hypocrisy just now. However, if they make denial of sacraments a big deal in the election campaign, they will certainly contribute to a possible Kerry victory. If voters see that the senator is banned from speaking, let us say, at the University of Notre Dame, that will infuriate just enough Catholics to decide a close election. If he approaches the altar in Boston and is waved away, it will notably improve sympathy among Catholics who also have been waved away when they demand a full accounting for the sexual-abuse mess.

A more important wild card is Latino voters. Despite Karl Rove's grandiose plans, the Latinos are not likely to align themselves with the rednecks who are their natural enemies, and will tend to be loyal to the Democrats with whom they agree on social welfare issues. President Bush's attempts at immigration reform are too patently an election ploy to have much impact.

The issue about the Latino voters (I actually prefer the term Latins) is not whether they are Democrats, but whether they will vote. For reasons of culture and history they are not politically mobilized. (Whether they are less likely to be mobilized than Italians were a century ago is an interesting question.)

Here in Arizona (where I teach some of the time) a slight increase in their voting rates helped Clinton to win in 1996. If the Democrats could mobilize most of the Latinos in the state, it would become permanently Democratic (and the East Valley Mormons who currently run it would be swept out of office and my colleagues at the university would win a long-overdue raise).

The increase of the Latino proportion in the country and their propensity (in part because of Catholic communalism) to be Democrats is one of the great long term assets for the Democratic Party if it is able to make the most of the opportunity. Whether the Kerry candidacy will be able to accomplish such a mobilization remains to be seen. However, and with some exceptions, the Latinos (as every other ethnic group) are likely to turn out and vote for one of their own. Hence a vice presidential candidate like Gov. Richardson of New Mexico might appeal to many Latinos. The Kerry team would be making a serious mistake if they ignore that possibility.

Would the presence of two Catholics on the ticket turn off some Protestant voters? Those who might be offended are not likely to vote for Kerry anyway, but it would be a calculated risk.

There is a final dimension of the "Catholic factor" which must be whispered: There is a certain visceral dislike among many Catholics for some forms of evangelical enthusiasm -- the demand to know whether one "has been saved," the implication that Catholics are not "Christian," challenges of "Mary worship," denunciation with biblical quotes. Some of this antipathy dates to Catholic servicemen's first encounter with fundamentalism in World War II camps in the South. With the presently available data there is no way to quantify such dislike. However, if the appeal to Bush's "base" should become more blatantly evangelical (like a visit to Oral Roberts University) there could be a Catholic backlash.

In sum, Catholics are different because they have different views of reality than do other Americans -- more communal rather than individualist, and more sacramental rather than secular. After all these years those different views should be obvious to candidates, their media advisors, political pundits and editorial writers. This ignorance of the Catholic factor suggests that nativist bigotry may still have a grip on the cultural elite.