Paradise at $2 million an acre

The Bay of Banderas is being shaped into a globally financed integrated tourist mecca, based in Puerto Vallarta and including luxury resorts in the north and eco-tourist ventures in the mountains and jungles. 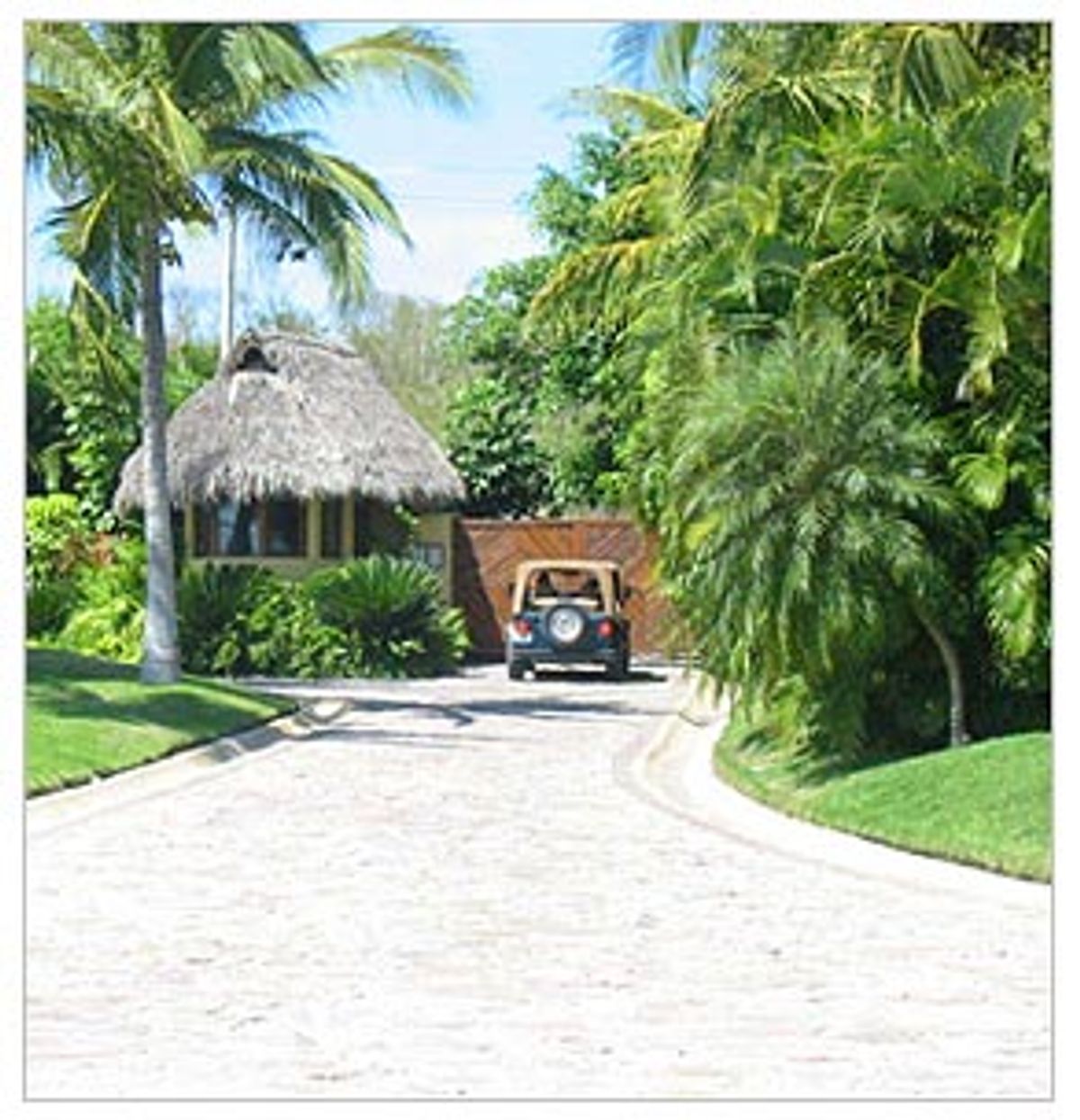 Only a few miles north and west of Puerto Vallarta around the Bay of Banderas, you can still have some of the best beaches in Mexico pretty much to yourself. But hurry on down; no paradise, no matter how pristine or inaccessible, is immune to global development pressure. A coalition of private developers and the Mexican government are beginning to unroll a mega-resort in the area, from the beaches in the north to the jungled coast in the south. The plan is ecologically sensitive, to minimize its impact on the environment and attract international eco-tourist dollars, but massive nonetheless. According to the master plan created by FONATUR, the Mexican tourist development bank, the Banderas tourist trade, along with the local population, will nearly triple in size in the next 20 years, to 6 million visitors and 670,000 inhabitants.

Since the 1960s, Puerto Vallarta has grown more or less haphazardly into Mexico's second-largest resort. It began as a chic in spot after the Elizabeth Taylor-Richard Burton romance and grew steadily over the years as a haven for pleasure seekers of all sorts, attracted by the natural beauty and easygoing attitude of the place. Liz and Dick are now memorialized by life-size statues in a downtown restaurant, but Puerto Vallarta has grown far beyond its glamorous start. It attracts hundreds of thousands of tourists yearly for a great variety of activities -- fishing, golfing, swimming, boating, para-gliding, shopping, eco-touring, flirting, partying, exploring. It's a popular gay destination. It is the center of tourism for the bay and so important that when Hurricane Kenna wrecked its seafront promenade and buried it under 6 feet of sand in the fall of 2002, FONATUR spent nearly a million dollars to get it cleared and rebuilt by Christmas.

Pinched between steep mountains and the bay, Puerto Vallarta now has nowhere left to build. The beaches to the north in Nayarit, which are really the best on the whole bay, have resisted development because of the aridity of the land and the lack of utilities and infrastructure. Rainfall there is only six inches a year, compared to 60 inches in Puerto Vallarta. To the south, the coast is mostly mountainous jungle that is difficult to get at.

Nevertheless, the Bay of Banderas is so big and so rich in natural tourist attractions that FONATUR wants to make the area into a single integrated resort that will compete with major tourist centers both in Mexico and abroad. It is coordinating the establishment of water and highway infrastructure, development of local building regulations, and financing from multiple sources, both Mexican and foreign. As a result, prices of primitive beachfront land are now pushing $2 million an acre.

The development of the Nayarit beaches began in the mid-1990s between Nuevo Vallarta, a condominium complex with a large marina a few miles north of Puerto Vallarta, and the five-star Four Seasons hotel built on the site of a former ejido (land collective) at Punta de Mita, the northern point of the bay. Local legend, to which everyone subscribes, from waiters to real estate agents and developers, is that the ejido residents were forced off the land at gunpoint, with the permission, if not the actual assistance of, the Mexican government. They were resettled outside the hotel's discreet gate in concrete block houses in a town named Emiliano Zapata. These they have now decorated with plants and flowers, and the town sits uneasily between the resort and a condo/restaurant strip at Anclote.

The ejido land is now a global asset. It is controlled by Dine, a small subsidiary of a Mexican conglomerate named DESC, which has interests in automobiles, chemicals, food products (it owns Smuckers and Reynolds, among others) and real estate. DESC is traded on the New York Stock Exchange and has branches throughout Mexico and in the U.S. and Spain. Though real estate contributes only 4 percent of its revenue, DESC says it owns prime land for residential and office development in Mexico City and tourist development on both coasts. Punta Mita is one of its main properties.

Dine solved the water problem by importing it from wells near the large agricultural valley that stretches northeast from the bay toward Tepic. This is the general water solution for all north coast development, which is why it is restricted to low-density occupancy (nine bedrooms per 2.5 acres in some spots); and that in turn is why this part of the coast will eventually be reserved for the very rich. Adjacent to the Four Seasons, Dine is now offering multimillion-dollar homes with exclusive access to the beaches, which are patrolled by armed guards.

High-density development will happen at the other end of the beach strip, where Nuevo Vallarta has apparently beat out Puerto Vallarta to become the site of a new convention center that will serve to attract more hotels and, it is whispered, a casino. Mexico does not now have gambling, but anything is possible here, particularly with foreign assistance. Puerto Vallarta wanted to put the convention center on the edge of the last remaining green spot in town, an ecologically threatened mangrove swamp. This month, pressure from environmentalists apparently convinced its investors to switch to Nuevo Vallarta.

Between Nuevo Vallarta and Punta de Mita, the infrastructure is being completed for further development under tight environmental regulations. The four-lane highway that was built north from the Puerto Vallarta airport halfway around the bay to Bucerias in 1999 will be extended all the way to Punta de Mita; this $25 million project, funded by the federal government, will start next month.

Most of the land here is privately owned, and the process of acquiring it for development is being coordinated by FONATUR. This agency loftily defines its role as being a provider of "planning tools for designing sustainable resort cities which harmonize Ecological, Urban, and Social considerations with Tourism and Business activity." It is also essentially a bank for the development of tourism, finding financing and providing low-cost loans, and has been a leading force in the development of resorts at Los Cabos, Cancun, Puerto Escondido and Loreto.

FONATUR wants to drive development as hard as it can, without wrecking the environment. Its master plan for the bay, a blueprint for vigorous development, also includes emphasis on water treatment, bay pollution, and protection for ecologically delicate areas. Every development project needs to spell out its water system in an environmental impact report, and include a water treatment plant in its construction. Some golf courses are now watered by desalinization. "It's getting hard to build here," says Alexis Burwell of La Punta Realty, with considerable respect for the rules that make it that way, and their enforcement.

Those who do build, though, or promise to, are doing very well. There are a a score of active developments along the coast now, and Burwell says the properties are selling well, from the self-contained complex in Nuevo Vallarta with condos, private villas, shopping center, golf course, marina and spa, to the dozen lots up the coast "in a pristine cove on a private beach bordering an ecological preserve." Or perhaps you'd be interested in an "Amazing protected cove and private beach; Perfect for hotel site."

Most of the money for this development, several real estate agents told me, is from Mexican and other North American sources. There are also Spanish and Italian investors, and Japanese backers are always rumored, particularly in stories about a casino. "Every time we hear about the Japanese, it's usually just a story to hide the real backers," says Ron Walker, a Puerto Vallarta consultant. Some of Mexico's banks, which also fund development, have been sold to companies in the U.S., Spain and Hong Kong.

FONATUR is eager for any kind of investment. The agency's director, John McCarthy, says the source of tourist development money is irrelevant to Mexico; the important thing is the promotion of the investment. FONATUR has a $137 million kitty to help the process along in the next two years.

Puerto Vallarta is pushing its residential colonias to the edge of the mountains and up the Valley of Banderas. Its growth as a tourist center, Walker thinks, can only come via eco-tourism, which is already its fastest-growing segment. In the global economy, Walker points out, Puerto Vallarta competes with Paris and Rome for tourists. "I think it's illogical for us to compete on an international scale, when we have a competitive advantage in ecology," he says. "Mexico is a country which is linguistically and ethnically the most varied, and with the most biodiversity, in the world. That's the area where I think we should give emphasis. I can't think of any country that offers it in such abundance as Mexico does."

Fifteen miles south of Puerto Vallarta, at the Boca de Tomatlán, the highway veers inland and the rest of the coast to the southern tip of the bay at Cabo Corrientes is very difficult to reach. But the mountainous jungle is a magnificent haven for Walker's eco-tourism. Here the state of Jalisco and the local municipio of Cabo Corrientes are working to improve the infrastructure of small coastal communities such as Yelapa so as to facilitate tourism here as well. The dilemma of building roads to some of these places, solving the problem of how to reach such remote sites by sacrificing their most attractive asset, their isolation, continues to vex planners and residents. But development of the north bay beaches will put increasing pressure on the jungled coast to the south, the last open area available. From tip to tip, the entire bay is now in play.

Next: Digital Divide or Network Frontier?