Even Kate Beckinsale in a leather corset and Hugh Jackman's cast-bronze pecs can't save this lavishly cheap monster mush. 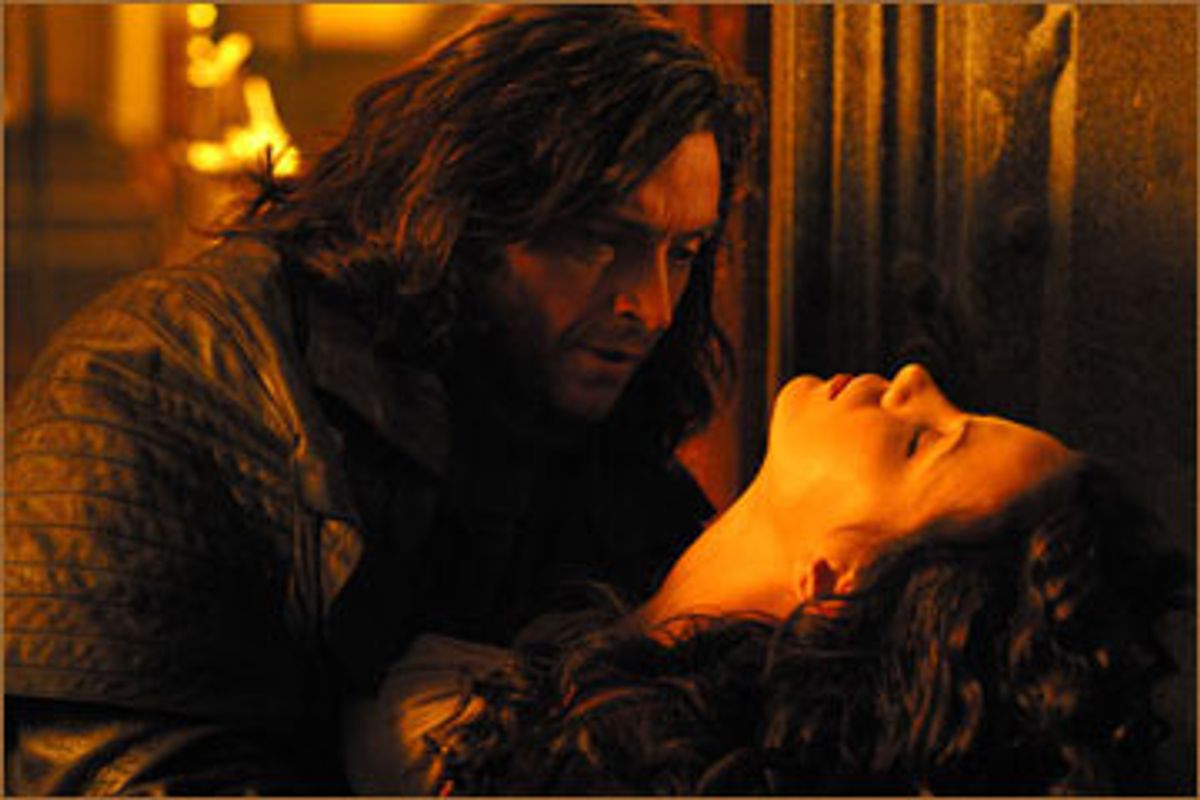 You can tell just by looking at "Van Helsing" that it cost a heap of money to make: There are lots of vampires turning into humans and back again, massive numbers of flying-monkey-style slimy winged critters, and a mammoth costume-ball sequence outfitted with hundreds of gowned extras and a mini-troupe of Cirque du Soleil acrobats swinging from the rafters. "Van Helsing" wears its price tag on its ruffled lamé sleeve. And yet it gives off an aura of what I can only call lavish cheapness. Every detail shouts, "Look at me!" even as the script limps along like an afterthought, pinched and crippled like a Dickensian orphan, hoping to escape our notice.

This is what happens when you spend pots of money on special effects but don't give a fig about storytelling. Plenty happens in "Van Helsing" -- it is, after all, the story of a bounty hunter who's hot on the trails of Count Dracula, Mr. Hyde, Frankenstein's Monster and assorted werewolves. But the action rattles past us in an amusement-park blur, jerking and jolting us without giving us a chance to drink in the images in front of us, or come to any significant understanding of the characters. There's no doubt "Van Helsing" is packed with stuff. But you can't shake the feeling that the director, writer and producer, Stephen Sommers (who also made both "The Mummy" and "The Mummy Returns"), is dancing as fast as he can, precisely so no one will notice that his movie doesn't have the right stuff.

There are bits of "Van Helsing" that certainly ought to be right, among them its stars: Hugh Jackman toils nobly in the role of bounty hunter Van Helsing, who roots out nasty beasties for a top-secret organization that happens to be the Catholic Church. Van Helsing also has a dark personal secret that isn't revealed until the last quarter of the movie, and if you're not completely worn out by that point, you might actually care what it is. Long before that, though, he gets an assignment to protect the last two members of an old Transylvanian clan, one of whom is an Eastern European vixen with tousled tresses and a pleasing wardrobe of peasant blouses and leather corsets. This would be Anna Valerious, and while it's a damn shame that Groucho isn't around to make a silly rhyme out of her name, she is at least mesmerizing to look at, seeing as she's played by the always-alluring Kate Beckinsale.

Anna's family has been almost completely killed off by none other than Count Dracula (Richard Roxburgh, who was the duke in "Moulin Rouge"), and now he's gunning for her, too. Meanwhile, though, all around them numerous subplots skitter and scamper like annoying cartoon devils with pitchforks. Dracula is also trying to capture Frankenstein's Monster (Shuler Hensley). If he can just get a hold of Frank's juice, he can animate the jillions of slimy pods that hold his yet-unhatched children, whom he's sired with his three wives, Flopsy, Mopsy and Cottontail (OK, their real names are Aleera, Verona and Marishka, they're flying vampire girls, and they're played by Elena Anaya, Sivia Colloca and Josie Maran, respectively). Meanwhile, Anna's brother Velkan (Will Kemp) has been turned into a werewolf. The plot, like the sludge around it, thickens.

Of course, "Van Helsing," like the "Mummy" movies, is supposed to be ridiculous. The creaking machinery of its nonstop uproarious fun includes many obvious nods to beloved monster movies of yore (many of which Universal, the studio behind "Van Helsing," is now releasing opportunistically in spiffy boxed sets). And the dialogue, which is stiff and silly, is intended to be stiff and silly, which supposedly makes it all OK. One character says to another, "You're choking me." The other responds, "Give me a reason not to." I was certain the next line was going to be "Your mother wears army boots" -- but maybe it was cut from the script, seeing that this monstrosity lumbers along for more than two hours as it is.

"Van Helsing" is full of winks and nudges, and yet it never strikes the right tone. It has more in common with the exhausting, cluttered "The Mummy Returns" than with Sommers' earlier feature, "The Mummy," which at least clattered along at a clip, glowing with the spirit of Saturday-afternoon TV-monster-movie fun. But "Van Helsing" is too antic and tedious to be enjoyable. Sommers has no sense of pacing. Just when the two lead characters get going in a conversation that might, potentially, clue us in to what they're about, something loud and distracting has to happen: Beams give way beneath them or above them, or they get shoved off a snowy cliff, or they fall off a castle ledge, or something.

Beckinsale looks like dynamite, but she's saddled with a halting phony-Romanian accent that she can't pull off, not even for laughs. And Jackman, so astonishing in both "X-Men" pictures, barely registers at all, unless he's got his shirt off -- not that his cast-bronze pecs are anything to complain about. But Jackman is capable of giving us much more, and Sommers doesn't even bother to ask for it.

"Van Helsing" is graced with a few astonishing images, most notably that of a hairy beast crying out in anguish as he clutches the body of a dead girl as if it were a precious, crushed flower: It's a picture drawn from the blurry intersection of nightmares and erotic dreams, and it's intensely cinematic. (The director of photography is Allen Daviau, who shot "E.T.") But it whips by like an image in a flip book; there's so much to look at, crammed in before and after it, that it barely registers. Sommers doesn't want us to be bored for a minute, which is a good attribute in a filmmaker provided he doesn't make you feel as if you're sealed up in a cocktail shaker. As it is, "Van Helsing" leaves you feeling jostled and enervated and deeply unsatisfied. The movie sucks the life out of you not in one deliciously languorous draw but in a series of clumsy, slurping gulps. Its resonating belch follows you out of the theater.