Bono on the barricades

The rocker humanitarian talks to Salon about why he's hopeful America will do its duty helping Africa -- and how if diplomacy doesn't work, "I'm ready to be out on the streets." 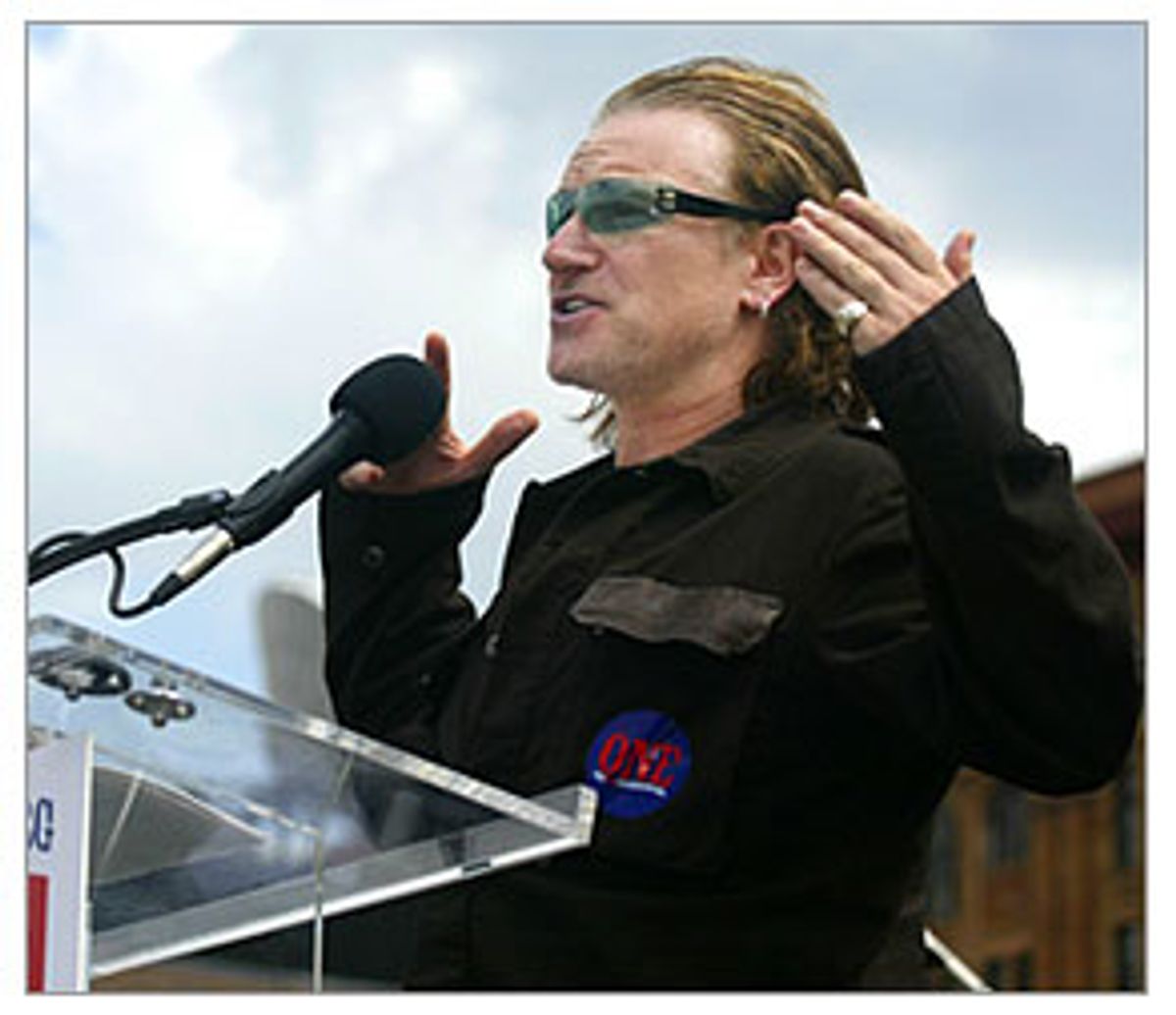 Bono likes to call himself just a noisy rock star. But your average noisy rock star doesn't get nominated for the Nobel Peace Prize and tell presidents and members of Congress what the nation's priorities should be. So much more than a token celebrity spokesman, Bono's gone from being one of the world's greatest rock stars to one of the world's leading voices in the fight against the biggest humanitarian catastrophe of our time -- AIDS and extreme poverty in Africa.

But don't call Bono a rocker with a cause. "This isn't a cause, we all have our causes. This is an emergency," he said on Sunday as he launched the ONE campaign to convince Americans that we need to demand a more urgent response from our leaders to the crisis in Africa.

Bono, co-founder of Debt AIDS Trade Africa, which advocates for African countries, wants 1 percent of the U.S. budget devoted to AIDS and poverty in Africa. But Bono's still trying to convince President Bush and Congress to follow through on their last round of promises, including providing cheap antiretroviral drugs -- plentiful right here in our neighborhood drugstores -- to Africa, where every day 6,500 people die from HIV/AIDS as another 9,500 get infected.

"I'm proud to be a pain in their arse," Bono told a crowd at Independence Mall in Philadelphia, adding, "In case the FCC is listening, 'arse' is an Irish word." He was referring to his recent role as free-speech poster boy, created after the FCC reprimanded NBC after it aired the U2 singer's comment -- "this is really, really fucking brilliant" -- during a Golden Globes broadcast.

But while Bono fancies himself the rebel, he also seems to have a natural grasp of politics, which will be on display again this week when he testifies before Congress. He compares the AIDS crisis to the Holocaust -- and is quick to point out that his view is shared by a Holocaust survivor in Congress. He bemoans that not enough is being done in Washington about the daily dying in Africa, yet approaches the problem with optimistic diplomacy. About the politicians: "They're getting it," he told Salon.

Scruffy, graying on the edges and dressed-down in a brown buttoned-down cloth-and-leather shirt, drab cargo-type pants, sandals, and yes, the wraparound blue sunglasses, Bono talked to Salon about his life as a global activist, and shared his thoughts on the presidential candidates, his old friend and Bush Cabinet exile Paul O'Neill, and what would cause him to scrap diplomacy and head to the barricades.

What will you tell Congress this week? You talked earlier about decisions being made in Washington right now about keeping promises to fight AIDS and poverty -- something we heard President Bush talk about last year during the State of the Union address. What will you say?

There's been progress, just not at the rate we would like to see it. President Bush in his State of the Union inspired many people with his passionate call to get the drugs to people who need them "on motorcycles and bicycles" if we had to. I want to remind Congress that is the tone of the promise so far.

Why do politicians need to be reminded of this? Don't they get the urgency of the problem? Certainly you and others have spoken with them already, telling them how many thousands of people are dying every day -- what is the problem?

I think they are getting it now. They are joining the dots, the various strands of reasoning on the subject are being finally woven together in one coherent plot. There's the political strand. It's an important thing to do in a world where the flag is being dragged through the streets of foreign dusty capitals. These drugs are great advertisements for America. And they run the flag right up the flagpole -- they rewire the way America is seen in the world. Then there's the economic argument, which is, the problem metastasizes and the longer we leave to act the more expensive it will be. That's also true, by the way, on a strategic level for the military, which is to say that it's cheaper to prevent fires than put them out later. With extreme poverty out of control brings chaos and instability that terrorist groups attempt to take advantage of. Islamic extremists bring a kind of order to the chaos of Africa when we don't.

So AIDS and poverty in Africa has a connection with global terrorism. Do you think that message will resonate more with Americans than saying that this massive crisis is happening on another continent and we should do something about it?

That brings us to the third strand, the moral imperative. A few years ago, I thought the church was asleep on these issues -- there was a certain judgmental aspect dealing particularly with the AIDS virus. Now you see church folks hanging out with student activists. So we're going to use the different arguments with the different communities. The people guarding the wallet of America tend to be more interested in political self-interest arguments than the church, which is more interested in the soul of the country and the moral imperative.

In terms of addressing AIDS and poverty in Africa, does it matter who wins the presidential election?

We want it to matter. We want people asking both candidates very hard questions.

But does the choice matter? From what you've heard, are you satisfied with what either candidate has said on this issue?

We want more money out of both candidates promised and pledged.

Have you talked to John Kerry about this?

Yes, I have. I spoke to John Kerry recently. He's one of the best-briefed men on this issue. His wife is African, let's not forget [Note: She was born in Mozambique], and he has a woman in his office called Nancy Stetson who's extraordinary on this stuff, really a detailed crossing the T's and dotting the I's policy person. We're big fans of hers. And we will be as demanding of John Kerry as we have been of the president.

Will you endorse a candidate?

No, we don't endorse candidates.

Will you if it seems that important, if the candidates' plans are just so different that it would make a difference on this issue?

Our candidate is Africa, that's what we're trying to get elected. Now, if we think it served the interests of people we represent maybe we would. Right now, it doesn't.

You've used the phrase "giving them permission," that Americans must give the politicians permission to spend the money on HIV/AIDS, and you have been very diplomatic on so many levels working with Jesse Helms and others who may have seemed to be unlikely partners. At what point does working within the system not work? When is it time for civil disobedience, for marching on Washington?

It's a lot more glamorous for a rock star to be on the barricades with a handkerchief over his nose throwing Molotov cocktails than it is to be wearing a suit and a bowler hat and turning up at town hall meetings, I can tell you. But again, if you have the chance to climb over those barricades and go through those security checkpoints and enter those corridors of power and enter those rooms where decisions are made you should be there making your case quietly, with whispers and reason. But if that didn't work, I'm ready to be out on the streets. This is an obscenity on the level of the Holocaust. There are many more lives will be lost to this than died in the Holocaust.

There's a congressman, Tom Lantos [D-Calif.], who was in Auschwitz. Years later, the thing that haunted him most wasn't his treatment in Auschwitz, which was appalling and beyond description. The thing that haunted him were the looks from the passersby as they were being put on the trains as kids -- being put on trains and people not asking questions about where those kids were going because they kinda knew the answer. And I asked him, is there an analogy here? We have 7,000 people dying every day. We have the drugs that can keep them alive. Is there an analogy here? It's a hard thing to ask a survivor of Auschwitz. And he said, I think it's exactly analogous. He then wrote me a letter and said feel free to talk about my life in those terms and he encouraged me to lie across the tracks. And whatever it takes, we have to at least, whether we're artists, business people, politicians, we have to raise the alarm on what history will describe as one of the most crucial and defining moral issues of the age.

Someone who you've traveled with in Africa when he was Bush's treasury secretary, Paul O'Neill, collaborated on a book earlier this year about his time in the administration that made quite a stir. Did you read it, and what did you think?

I haven't had time to read it all. I read about half of it. You know, I am a fan of Paul O'Neill's. He was never going to be a politician, he just speaks what's on his mind. He had a great thing actually, he was looking at the problems in Africa as an entrepreneur. He was seeing them as a businessman; he'd jump out of convoys to collect data. He was just convinced that so much was doable. He was starting to see it as an opportunity for America rather than a burden for America. It was sad to lose him.

You've said your celebrity is currency for you to make a difference and effect change, although you've also called it "preposterous and absurd" that celebrities be the ones to speak to people so prominently about issues like global AIDS and poverty. But is it really? The theme of the ONE campaign is we all can make a difference. You happen to have a different platform to speak from, than, say, a mother in Philadelphia or wherever. Do you see it as your responsibility to do this?

The word "duty" is an old-fashioned one, but I think we may have to just think about the word "duty" again. This is a duty and a privilege.

Americans are worried about the war on terrorism and the war in Iraq. We're spending an estimated $150 billion before the end of the next fiscal year on Iraq while we're still hammering out the $15 billion for the AIDS crisis. How do you convince Americans in these times that fighting AIDS and poverty in Africa should be a priority and is their duty?

This is about what America means, you know. What America is about. America, this is a great country and not just a country but an idea. These are dangerous times. But this is a chance for America to do what it does best.