American consumers won't change their SUV-driving ways until there's a major fuel shortage or a global warming catastrophe, according to the new book "The End of Oil." And by then it may be too late. 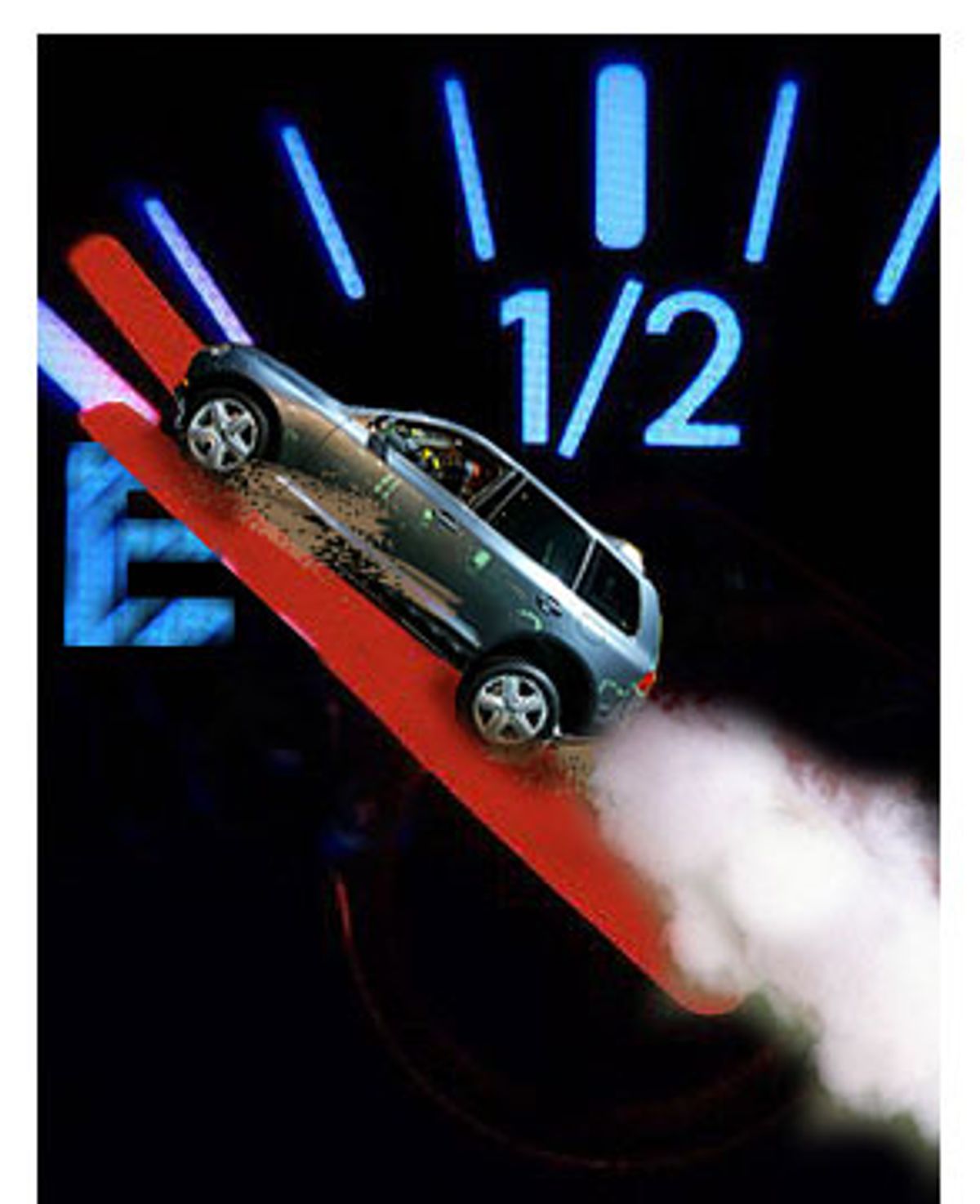 Oil, once again, is in the news. The price of a gallon of gasoline in the United States is rising weekly -- the cost of filling up the tank is 45 cents a gallon higher than it was just a year ago. U.S. crude prices hit a record high of $41.55 a barrel on Monday, a fact that has international political and economic implications.

But rising prices in the U.S. aren't yet setting off a revolt at the pump. (Although sales of the very largest SUVs -- the Hummer and Ford Expedition -- have fallen in the first four months of this year, midsize SUV sales are up.) American drivers are fueling up more often than ever, motoring about 12,000 miles a year, in ever bigger gas-guzzling cars, trucks and SUVs. In an era where fears of global warming are rising almost as fast as gas prices, the question of how Americans can be driving larger, heavier cars for greater distances than they were in 1980, yet still remain largely "energy illiterate," gets to the heart of Paul Roberts' new book, "The End of Oil: On the Edge of a Perilous New World."

The title is a bit misleading. Roberts is less concerned with the depletion of worldwide oil resources than he is with the economic and political dynamics that buffer "the most profligate energy users in the history of the world," aka Americans, from the likely consequences of declining worldwide stocks of fossil fuels. That's not to say there isn't an end in sight. As the Wall Street Journal reported on Tuesday, oil consumption, worldwide, is growing faster than the discovery of new reserves of oil. Roberts marshals the usual figures about how oil supplies are diminishing, although experts differ about whether the peak in oil production will come in 2005 -- the current pessimistic view -- or 2035 -- the optimistic (and current U.S. governmental) view.

Pessimistic predictions about the depletion of fossil fuels have been made in the past, and yet, so far, there's been no evidence that a crisis point is imminent. One reason often provided for this is that new technologies of oil extraction and discovery have made previously inaccessible reserves, such as those under the seafloor, economically viable. But Roberts points out that the easy-to-access (and therefore less expensive to tap) reserves are clearly in decline. And what remains of the "easy" reserves is mostly under the control of the OPEC cartel, which puts the United States in an ever more dicey strategic position.

A separate problem from the issue of exactly when the production of oil will peak is the worrisome reality that worldwide demand for energy will likely soar in the next few decades, as countries such as India and China start competing with the United States for resources. To get an idea of the accelerating pace of that growth, consider that in 1995 some 33 percent of Shanghai residents rode a bike for personal transportation while 31 percent walked, 25 percent took the bus, and less than 5 percent drove. But in just the five years between 1995 and 2000, car use by residents tripled from 5 percent to 15 percent. Cars are expected to represent 50 percent by 2020, Roberts reports.

Coal, not oil or natural gas, is likely to be the cheap, dirty, CO2-spewing fuel that will generate the power for many of these rapidly developing nations. This has raised fears among climate scientists that temperatures will continue to rise across the globe in decades to come as result of carbon emissions. But the U.S.'s see-no-evil stance on global warming, which has included gutting existing pollution regulations, has not only infuriated other nations, it's also handed poorer countries an easy rebuttal when the rest of the world tries to encourage them to invest in cleaner technologies. Why should they bother when the world's biggest energy user, the affluent United States, doesn't?

And it's not just the U.S. government that doesn't care. It's the individual consumer, as well, who appears remarkably indifferent to price jumps. Roberts compellingly argues that it will take more than a temporary spike at the pump, or even the ongoing Iraq war, to wean Americans from their energy-hog habits, much less mobilize the country to confront global warming.

Roberts puts the dilemma this way: "In the simplest terms, the energy challenge of the twenty-first century will be to satisfy a dramatically larger demand for energy, while producing dramatically less carbon." He analyzes the possible options for alternative energy sources -- including the clean dream of hydrogen fuel-cell cars -- that could help the world consume less of the CO2- and pollution-rich energy we're currently bingeing on. By charting the history of energy consumption -- from wood and biomass fuels to coal and then oil and natural gas -- he makes a convincing case that massive energy infrastructures can change.

But he is not optimistic that any of the alternative fuels can compete with the entrenched fossil-fuel establishment in time to stem the impact of global warming. Every alternative source of energy has its flaws and hurdles to overcome, but their overall failure can't be pinned to specific technical issues with, for example, solar and wind power, or to the drawbacks of hydrogen as a form of energy storage. The real problem is that consumers -- and the governments that represent them -- are not yet feeling the economic pressure to inspire them to invest in such a switch.

Roberts contends that it took the threat of actual fuel shortages -- in particular, the California electricity crisis in the summer of 2001 and the oil-shock crises in the '70s -- to inspire widespread conservation. Going even further back, only the development of massive supply shortages impelled societies to move from energy infrastructures based on wood and biomass to coal, oil and natural gas. It's hardly a surprise, then, that the United States, with trillions of dollars of sunk investment in fossil fuels, isn't leaping to do anything about global warming or some future energy shortage. The effects of neither have been felt acutely enough to drive change.

Part of the paradox of American energy use, which Roberts neatly traces, is that as we get more efficient, we respond to that trend by consuming more. Our appliances, cars and houses have become far more efficient over the last few decades; "Today's car travels twice as far on the same gallon of gasoline as [it] did in 1970," he writes. But consumers spend that so-called energy dividend by supersizing their lifestyles with bigger cars, trucks and homes, which use more energy.

Between 1975 and 2000 the amount of energy required to produce $1 of the gross domestic product (GDP) fell by 40 percent while the economy grew by almost 50 percent. Thanks to better technology, we are already doing more with less, but it only makes us want to do more. The same trend makes advocates of hybrid cars wonder if, as their favorite technology becomes more mainstream, consumers will respond to the greater fuel efficiencies by simply buying even bigger cars, thereby wiping out the savings in gasoline and greenhouse gas emissions.

As one California energy consultant quoted by Roberts puts it: "Our environment does not respond to miles per gallon. It responds to gallons" -- meaning that how fuel efficient a country becomes doesn't mean anything if you are still consuming the same amount of energy -- or more -- overall. Even worse, argues Roberts, conservation can prove to be its own worst enemy. In the case of oil, when consumers fear shortages enough to conserve, prices fall, which in turn eliminates the economic incentive for conservation.

Roberts winds up by making a case for what he thinks the government could do to give both consumers and companies an economic incentive to conserve and consequently emit fewer greenhouse gases. His suggestions include adding a $5,000 penalty to the sticker price of massive, inefficient vehicles to account for their "life-cycle costs." But his own arguments about American energy obliviousness would appear to undermine the possibility of such a regulation ever going into effect, even with a change of presidential administration.

Ultimately, one is forced to conclude from his presentation that nothing but massive shortages, or a global warming catastrophe that oil-industry-funded climate-change skeptics won't be able to convince the public is caused by something else, will inspire Americans to curb their hyper-consumptive ways. "The more we learn about the history and character of our energy system, the harder it becomes to see how the world can escape some kind of massive disruption, given current trends," he writes.

Only then will we finally change our ways, and by that time, it could easily be too late.