Judgment bad! Acceptance good! This movie about religious hypocrisy not only thumps us over the head with its kumbaya message, but also gives us Macaulay Culkin as a sex symbol. And that's just wrong. 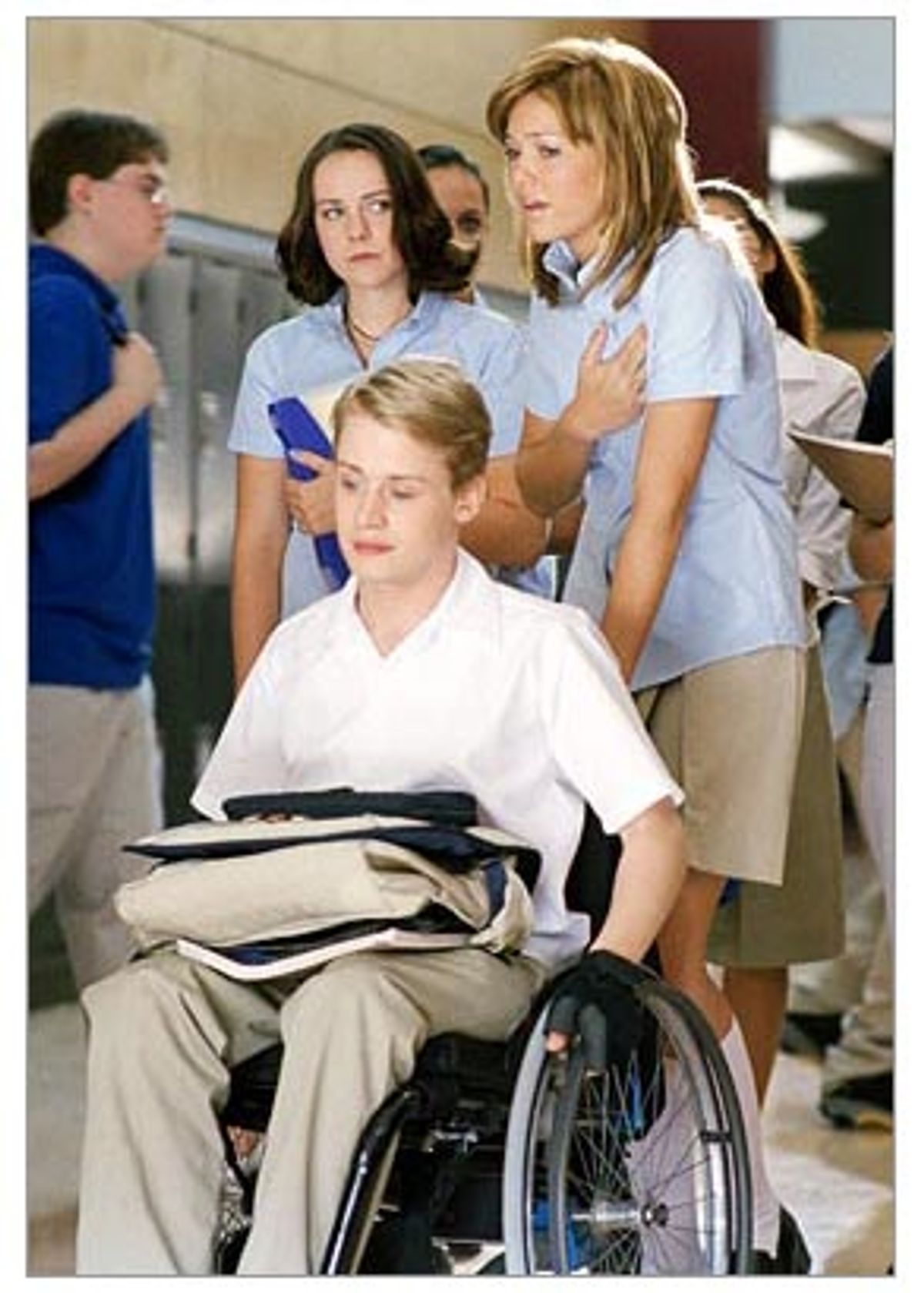 The advance word on Brian Dannelly's debut feature film "Saved!" was that it was a hip, funny take on the hypocrisy of sanctimonious religious types. The reality is that it's neither hip nor funny: Instead, it's excessively broad one minute and unctuously instructional the next. By the end, when the main character decries judgmental behavior as "un-Christian," you can hear the Geiger-counter-like tick of the filmmaker's message-o-meter clacking furiously. Judgment bad! Acceptance good! We're all invited to join the interfaith sing-along.

"Saved!" doesn't seem particularly insulting to Evangelical Christians, nor to Christians of any stripe. Even though it pretends to be sharp and observant, it's really one of those "Let every flower in the garden grow" movies, conspicuously lacking both guts and well-sharpened teeth.

The premise at least sounds controversial, and it's witty in a way the movie doesn't properly build on: A 17-year-old high schooler and devout born-again Christian named Mary (Jena Malone) becomes pregnant after having sex for the first time with her boyfriend. The twist is, he has revealed to her that he thinks he's gay, and prompted by what she believes to be a holy vision, she has seduced him to turn him straight and save his soul. When her friends, led by rich, snooty, publicly pious queen bee Hilary Faye (Mandy Moore), find out about her condition, they turn against her. A further complication turns up in the form of the new skateboarding hottie at the school, Patrick (Patrick Fugit, of "Almost Famous"), who happens to be the son of the school principal, Pastor Skip (Martin Donovan). He takes a liking to Mary, but she rebuffs him, not wanting to involve him in her personal problems.

"Saved!" suffers from an uncertain, fuzzy tone. On the one hand, we're invited to savor, "Mean Girls"-style, the nastiness of Hilary Faye's cruel little social clique. (They're also a singing group, and they call themselves the Christian Jewels; Hilary Faye has had little jeweled pins made up for each member.) In the end, of course, we realize that poor Hilary Faye is a human being just like any other, likely to make mistakes and in need of forgiveness.

"Saved!" starts out winking at us, like a satire, and ends up with both hands clasped earnestly, urging us to see the good in others (whether it exists or not). The characters learn the true meaning of faith, and the audience, supposedly, walks away feeling happy and numb and glowing, transformed by the movie's lesson. The best satire illuminates the foibles of human beings -- it's a way of opening our eyes without thumping us on the head. "Saved!" can't stop thumping; it just leaves us achy and exhausted.

The actors in "Saved!" work hard to pull the movie's weight, and sometimes they manage to lighten it up, too. Fugit and Malone are charming if a bit indistinct, and Moore puts her pouty petulance to good use. Best of all is Eva Amurri as Cassandra, the "bad" girl who's landed at this special Christian-elite school (its first Jew!) because she's been kicked out of so many others. She wears her uniform skirt hiked up, just so, and dangles a cigarette between her lips with the insouciance of a Prohibition-era flapper. But it's a downer when she hooks up with Hilary Faye's younger brother, the wheelchair-bound Roland (Macaulay Culkin). The movie, written by Dannelly and Michael Urban, takes a great leap in attempting to give us a sex symbol in a wheelchair; the only problem, and it's a huge one, is that Culkin is the one playing the symbol. He strains to make his line readings smart and cheeky, but nothing works. He has both the complexion and the sexual charisma of a translucent seashell -- a mollusk with no meat.

But the movie's most significant problem by far lies in the way it deals with the consequences of teen pregnancy: In other words (and beware: there are some minor spoilers ahead), it doesn't. I'm not suggesting that "Saved!" should be a cautionary tale about the downside of teen parenthood. But no one in the movie -- not Mary, nor her well-meaning but clueless mom (played by Mary-Louise Parker) -- ever stops to ponder how having a baby will change Mary's life: It's just something you go ahead and do, the same way you rent an apartment or get a driver's license. The movie's ending suggests, with an annoying whimsicality, that this ragtag makeshift family -- consisting of Mary, her mom and assorted high-school pals -- will get along just fine, and in the movie's universe, they probably will. But I found the ending of "Saved!" extremely discomforting. The movie could easily be seized on as a "pro-life" (that is to say, an anti-abortion) parable, even though I doubt that was Dannelly's intent.

Whether you believe in a woman's right to choose or not, there's a coyness about the way "Saved!" makes taking the rough road look impossibly, irresponsibly easy. Will there be a sequel showing Mary changing diapers while her friends trip off blithely to good Christian colleges, the better to partake of football games and homecoming bonfires and perhaps even engage in a little forbidden premarital nookie? Now that would be a satire -- one I don't think Dannelly has the guts to make.