The Pentagon orders the military spokesman featured in the acclaimed documentary "Control Room" not to talk -- and now he plans to walk. 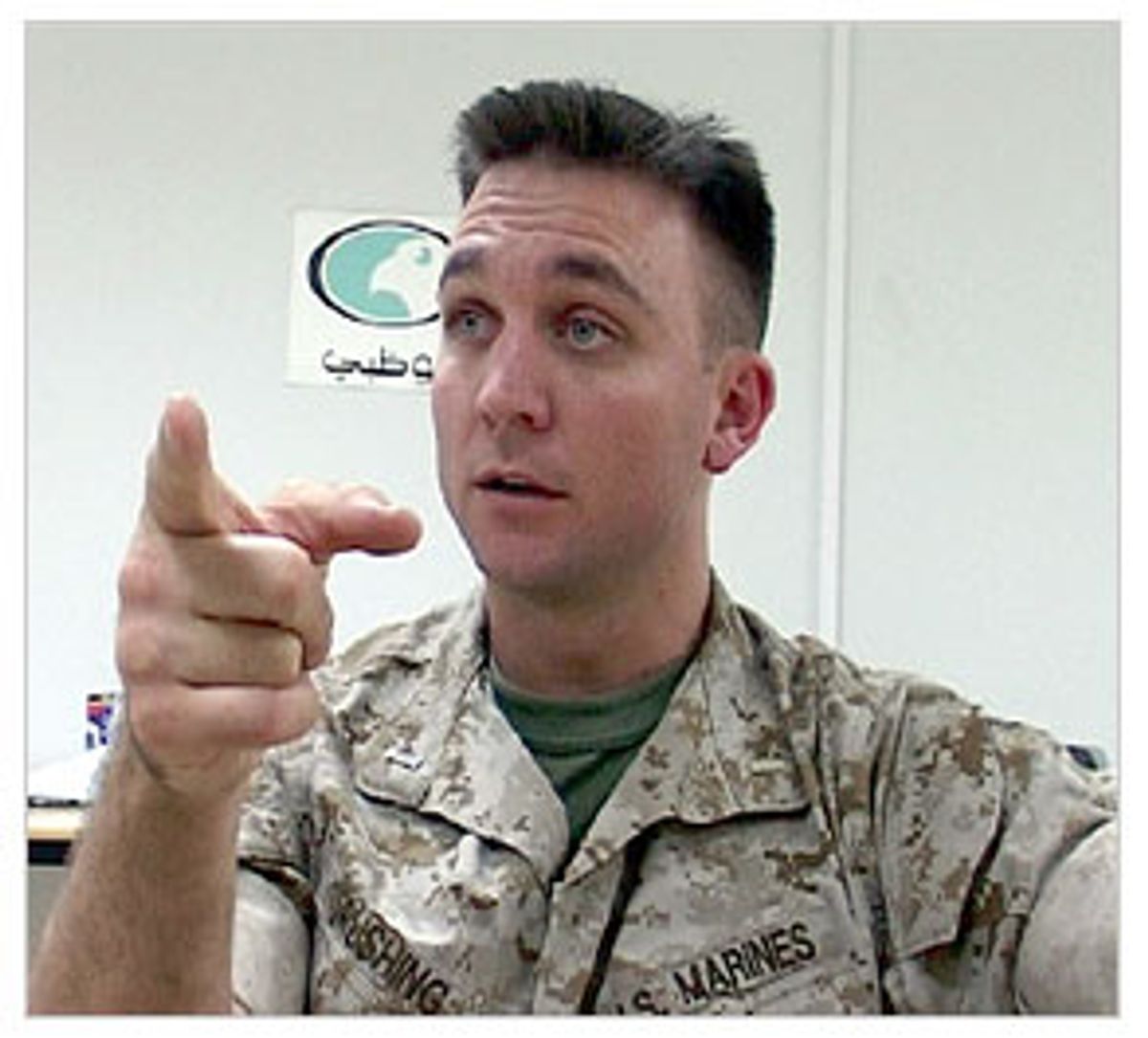 There's a moment a half-hour into "Control Room," Jehane Noujaim's widely acclaimed new documentary about the Arab news channel Al Jazeera and media coverage of the war with Iraq, when U.S. press officer Lt. Josh Rushing discusses his reaction to the brutal images of captured and killed American soldiers that Al Jazeera chose to broadcast in March 2003 -- to the condemnation of Secretary of Defense Donald Rumsfeld.

"The night they showed the POWs and dead soldiers ... it was powerful, because Americans won't show those kinds of images," Rushing says. "It made me sick to my stomach." The viewer then expects him to proceed in the same vein of patriotic rhetoric he's been using up to this point in the film -- he is, after all, a Marine -- but instead what follows is an unexpected, and profoundly moving, observation.

The previous night, Al Jazeera had shown similarly graphic images of Iraqis killed during a bombing in Basra, and Rushing calls them "equally if not more horrifying." At the time, though, he admits they hadn't bothered him as much. "I just saw people on the other side," Rushing says, "and those people in the Al Jazeera offices must have felt the way I was feeling that night, and it upset me on a profound level that I wasn't bothered as much the night before. It makes me hate war."

Rushing comes across as a sympathetic character in the movie -- earnest and thoughtful, a patriot and a skeptic -- with shrewd observations about partisan media coverage (Al Jazeera and Fox) and the failure of U.S. media to fully explain what is happening in the Middle East. But now the Pentagon has silenced Rushing, 31, ordering him not to comment on the movie. And as a result, the 14-year career military man, recently promoted to captain, plans to leave the Marines, his wife told Salon in an interview Thursday.

When first contacted by Salon about Rushing on Thursday, the Pentagon denied even being aware of the film, much less any order regarding Rushing. Lt. Col. Jim Cassella at the Pentagon press office said, "I can't remember us ever telling people not to speak to the press. We have the principles of information that the secretary of defense has signed which mandates that we are forthcoming and honest with the American people. As a matter of policy, we don't go around telling people they can or can't talk to the press."

He referred Salon to the Marine Corps, but there, too, the first response was denial that this sort of thing even happens. Capt. Dan McSweeney, commenting on whether Marines are typically asked not to talk to reporters, said, "I haven't heard of that going on except under extreme circumstances; in the middle of an operation, I can see that being the case."

Later in the day, however, McSweeney confirmed that "Captain Rushing is not available for interview on this topic." And on Friday, the Pentagon released the following statement to Salon about Rushing: "The reason why he's no longer able to talk to the media is that he is no longer in the billet that he was at the time, so he is no longer the appropriate person to speak to regarding this documentary."

Rushing is back in the United States and is no longer involved in active operations, though he is still on active duty and would not speak to Salon for this story.

According to sources close to the film, the Pentagon first became aware of Rushing's involvement in the film after filmmaker Noujaim appeared on an MSNBC show, by which time Rushing had already spoken with several media outlets, including the Associated Press and the Village Voice. On MSNBC May 13, Noujaim recounted a story -- not captured in the film, and one that Rushing also told the Voice -- about some friction between Rushing and other Marines caused by his closeness to Al Jazeera reporter Omar Al Issawi, who is also prominently featured in the documentary.

"One guy told me I better check the name on my uniform, meaning the Marine Corps," Rushing said to the Voice.

Shortly after Noujaim's MSNBC interview, according to a source close to the film, the Pentagon told Rushing he would be giving no more interviews.

Paige Rushing, Capt. Rushing's wife, said her husband is now trying to leave the Marines because of his treatment over the issue. Rushing enlisted when he was 17, and has been in the military ever since.

"I think he's been on the precipice of moving on with his life," Paige Rushing said. "He's been doing this his entire adult life, and he's looking for something that would allow him more creative freedom, and maybe more freedom in general. I think this is the straw that broke the camel's back for him, just feeling so muzzled and restricted."

She says she can't understand why her husband has been asked not to speak about his involvement with the documentary. "I can understand, perhaps, if he'd wanted to stage an anti-administration rally, but it wasn't anything like that. This was a personal experience, and I still don't understand why they have such a problem with him speaking."

"Everything that my husband represents in the military -- the defense of freedom, and hopefully the expansion of freedom throughout the world -- that's what a soldier is supposed to be, one would think. But it seems that he's denied some of those basic freedoms, and I really have a problem with that. I love the Marine Corps, I believe in everything he does, but it's very disappointing and disheartening to me that this occurred. He's not an anti-military person. This is something he's devoted his life to, and he really believes in everything the military represents."

In "Control Room," it's clear that Rushing is committed to his duties -- early on, after debating Al Jazeera's Hassan Ibrahim about the existence of Saddam's weapons of mass destruction, he pointedly tells the camera, "I'm not going to back down from my point that we're here to help the Iraqi people" -- and his position as a press officer is described as presenting America's military operations to the worldwide media.

And while no one will confuse Rushing with an antiwar activist, some of his comments in the film are surprising in their candor.

At one point he says this of his media diet: "When I watch Al Jazeera, I can tell what they're showing and then I can tell what they're not showing by choice. Same thing when I watch Fox on the other end of the spectrum." Later on, while talking to Ibrahim about Arab perceptions of America, he says, "No American connects the Palestinian issue and this issue. They're completely different. They might as well be on other sides of the world as far as they're concerned."

Later still, he tells Ibrahim, "If I get out of the Marine Corps and do anything, I want to do something with the Palestinian issue. I don't think Americans are getting good information about it, I really don't."

Nouhaim's reaction to the silencing was similar to Paige Rushing's. "The smartest thing the Marine Corps could do right now is to have him as their spokesperson," she says. "He's someone who blasted apart all of my stereotypes about the military; he's somebody who, on a daily basis, interacted with Arab reporters -- he was on both sides -- and he's somebody with a great deal of useful insight into what was going on. I don't understand it."

She also said that Central Command had been very supportive of the film, and that after the MSNBC interview, the Pentagon requested a copy, though she's not sure if anyone's seen it. She also added that Rushing is a compelling figure not only for Americans, but for Arabs as well. "People trusted him," she says, and for Arab viewers, he comes across as someone who has the potential to change the way they look at the American military. "And he was really excited about talking to the lefty press. These are channels that the U.S. military doesn't address very often, and it was very disappointing to me that he was just silenced."

The movie, which opened in selected theaters on May 21, is going to be distributed nationally starting June 11. It has received near-unanimous praise (In Salon, Andrew O'Hehir called it "surprising, puzzling and in many ways brilliant") from outlets as diverse as the New York Times, the New York Post and the Christian Science Monitor. It created considerable buzz after appearing at the Sundance Film Festival in February. Currently appearing only at New York's tiny Film Forum, it is breaking that formidable film house's box office records. According to the film's distributor, more screens were added after its success in Manhattan; it will be showing on well over 150 screens by the end of June, and more will be added in the later summer months.