The talents of Jackie Chan and Steve Coogan are tragically wasted in this disappointing reworking of the Jules Verne novel. 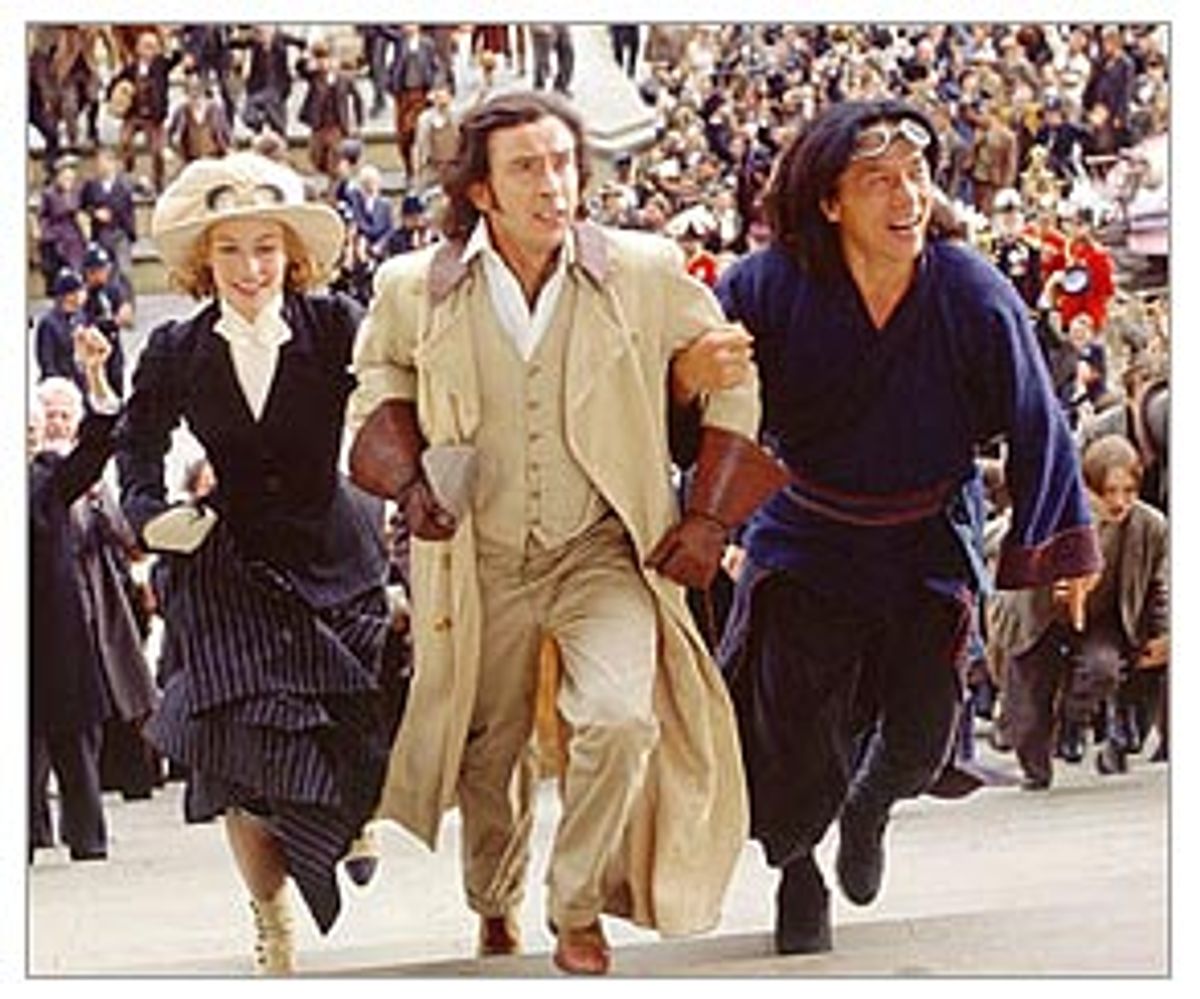 There are few tasks as thankless as charting the mysterious inability of American mainstream movies to fully tap the charm and physical grace of Jackie Chan. Why is it so hard to build a suitable vehicle for a worldwide superstar with as much charisma as Chan's got? "Around the World in 80 Days," directed by Frank Coraci ("The Waterboy," "The Wedding Singer"), is just the latest in this string of disappointments, and this time, the failure is particularly stinging: "Around the World" also stars U.K. comedian Steve Coogan (of "24 Hour Party People" and "Coffee and Cigarettes"), who has already given American movie audiences generous glimpses of the wry, understated comic pleasures he has to offer. He flails, valiantly, in "Around the World" -- the picture's muddy timing and overly broad gags do him no favors.

An earlier version of "Around the World" was a big hit for producer Mike Todd in the '50s. This version may be more disappointing than Chan's other American movies precisely because it seemed to hold more promise than the others. In this loose reworking of the Jules Verne novel (which, like the original, is set in the late 19th century), Coogan plays Phileas Fogg, a hapless but elegant London inventor who longs to be taken seriously by the Royal Academy of Science: Its corrupt and greedy head, Lord Kelvin (Jim Broadbent), refuses to admit him. The two make a bet that if Fogg can travel around the globe in 80 days, Lord Kelvin will cede his title to him.

Fogg accepts the challenge with relish, only to realize suddenly how impossible it is. Even so, he heads out with his recently hired valet, Passepartout (Chan), who, unbeknownst to Fogg, is hiding out from the British authorities on a robbery charge. Along the way -- a route that hops from London to Paris, and then to Turkey, India, China, San Francisco and New York -- they're joined by an adventurous and comely Parisian artist named Monique (the appealing if slightly flat Cécile de France, whose real name is even more fitting than her character's name for this light, cartoony material). Monique turns out to be a great asset to the duo: Somehow (it's never quite explained), her dazzling twinkle makes locomotives run faster, which greatly reduces Fogg's traveling time on land. Still, traversing the sea is time-consuming; if only Fogg could unlock the secrets of flight, which he's long been working on.

Of course, with a little help from his friends, he finally does build a whimsical contraption that gets him from here to there in record time. (His other inventions include inline skates, an outfit that can turn a human being into a minirocket, and a cane that houses a fold-up sextant and telescope.) But you can almost hear the gritted teeth of everyone involved in "Around the World in 80 Days" -- from the director to the actors (a string of famous cameos, as in the Todd version, among them) to the writers (David Titcher, David Benullo and David Goldstein) to cinematographer Phil Meheux -- trying hard to make it fun, fun, fun, all for naught.

"Around the World in 80 Days" is never as delightful and silly as it needs to be. The action is often manic, and there's a veneer of unapologetic corniness to it -- it seems to be taking some of its cues from Disney films of old (giddy, throwaway family entertainments like "The Computer Wore Tennis Shoes"), which isn't necessarily a bad thing. The problem is that even for all its goofiness, "Around the World" feels heavy and lumbering. The moviefied versions of exotic locales feel lavish without being particularly imaginative. The interaction between the characters, particularly their jokes, is cluttered by insistent close-ups. Everything in "Around the World" feels belabored and anxious, instead of jazzy and free.

And unfortunately, that goes for the stunts, too. Chan pulls off a few dazzling ones. The best one involves his dangling from a rope that's tethered to a hot-air balloon: Floating by an open apartment window, he spots a mother (in a detail you couldn't possibly make up, she's Macy Gray) sleeping near her crib-bound, crying child, just as a fire erupts in their flat. Passepartout (the made-up name comes from one of the movie's early gags) swings through the window, extinguishes the fire, and manages, miraculously (and, of course, with the help of some fancy cutting), to make his way back to the balloon.

Most of Chan's best stunts are likely to be found in his earlier, Hong Kong films -- he is, after all, an athlete, and age (Chan is 50) isn't exactly an athlete's friend. Chan is still capable of pulling off some astonishing moves, and his appeal as a comic is in no danger of waning. But he never quite clicks here in the same way he does with Owen Wilson in the indefensibly enjoyable "Shanghai Noon" and "Shanghai Knights."

Perhaps most disappointingly, unlike most other Chan movies, "Around the World in 80 Days" includes no outtakes from the filming of the movie. While there may be a sadistic element in seeing Chan get bumped around and bruised during the course of making a picture (he has, at times, been seriously injured), I think those outtakes serve a greater and more lasting purpose: Doing the kinds of stunts Chan delights in, and pulls off with such seeming ease, involves a level of risk that goes far beyond the usual psychological terrors of acting. Doing comedy is hard enough, without running the chance of getting your head bashed in in the process. Chan still seems willing to give his all. Why hasn't there yet been an American movie big enough to take it all in?