The director of "Croupier" takes a darkly compelling look at the London underworld. 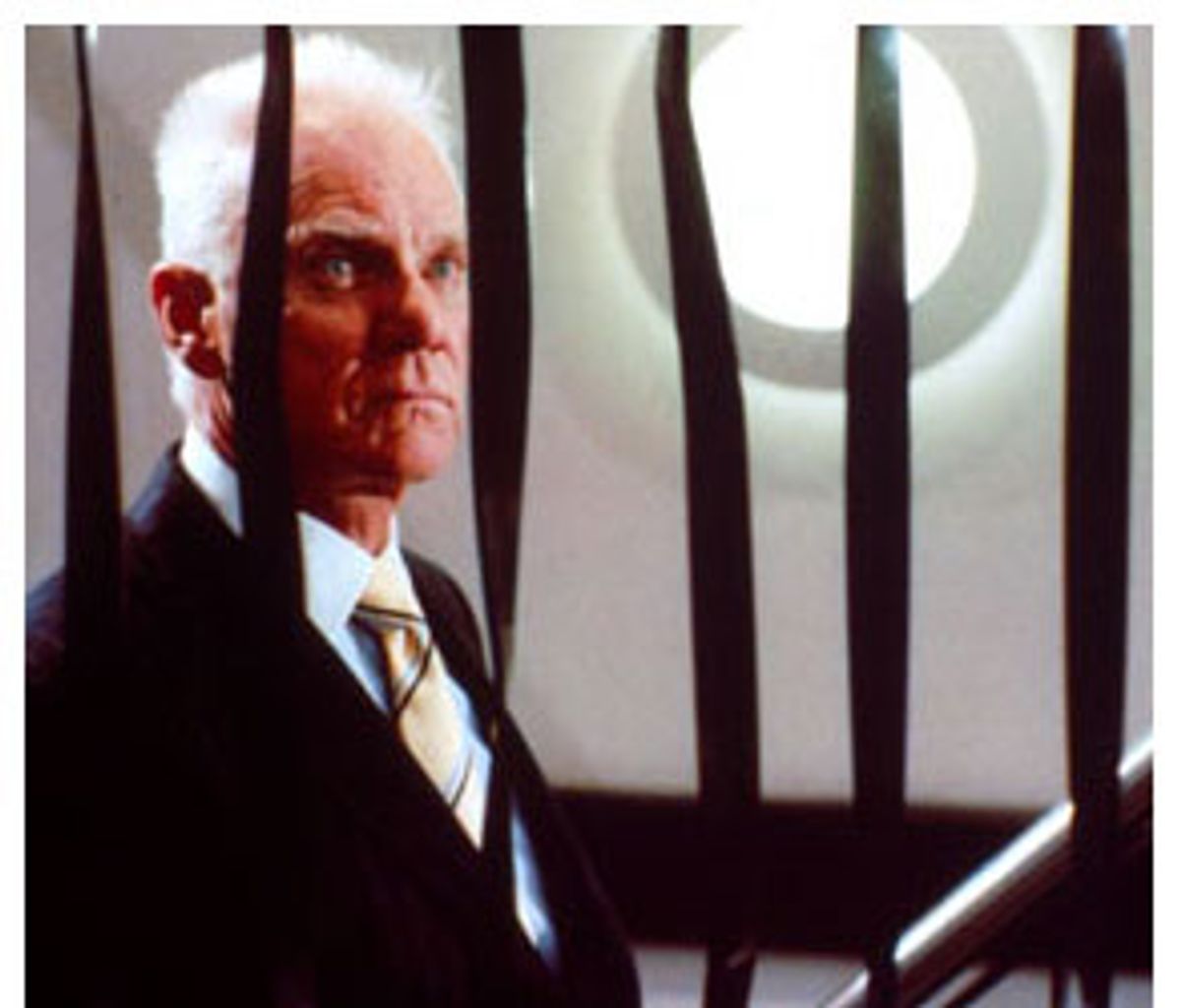 We know we're living in dangerous times for filmmaking when someone like Mike Hodges -- director of the iconic 1971 "Get Carter," as well as 1998's "Croupier" and the new, unnervingly compelling noir fable "I'll Sleep When I'm Dead" -- nearly slips through the cracks. Hodges has been working in the margins of commercial filmmaking ever since he made his debut with "Get Carter," starring Michael Caine as a cold, suave bastard of a London hood who journeys home to Newcastle to avenge the death of his brother. "Get Carter" was a disreputable landmark of English filmmaking, and watching it today, it's easy to see why. No dilly-dallying for Hodges: For a fledgling director, he knew just where to stick the knife, and his confidence as a filmmaker is almost as shocking as the movie's brutality. "Get Carter" is as cold as a movie can be -- we recoil from nearly every character -- and yet its ending leaves us feeling both drained and fully alive: What little juice we've got left in us is running hot and fast. "Get Carter" is both dislikable and great.

It's impossible to talk about Hodges' work without stacking up the paradoxes. His style is what I can only describe as ardently cool -- he's a filmmaker of numerous and insistent contradictions. Since 1971 Hodges has made just nine films (among them the bubbliciously enjoyable 1980 comic-book adaptation "Flash Gordon"), and for American audiences at least, he seemed to have pretty much dropped off the horizon -- until the surprise success of "Croupier."

In "Croupier," Clive Owen plays a coolly ambitious aspiring writer who, in order to make a living, returns to a line of work he both detests and excels at. The picture did poorly when it opened in the U.K. But something strange and miraculous happened when it crossed the ocean: Initially booked into a Loew's Theater showcase series for one week, it ended up running for four months. "Croupier" became an art-house hit in North America, and its success here prompted its rerelease in Great Britain. Hodges began developing "I'll Sleep When I'm Dead" years ago (its script is by Trevor Preston, with whom Hodges had collaborated on TV work in the U.K. in the mid-'60s). But when it looked as though "Croupier" would be a failure, Hodges began to lose hope that he'd ever have a chance to make the film. And even after the turnaround success of "Croupier," it took several years for Hodges to pull the financing together.

"I'll Sleep When I'm Dead" may not be the runaway hit that "Croupier" was. For one thing, it doesn't have that picture's sleek, organic elegance (there are those contradictions again). Yet it may be the more emotionally involving of the two movies. It demands more of us in terms of reaching out to its characters: They're sometimes so remote that we forget why we owe them our empathy. But Hodges always allows his characters to exist on their own terms, instead of insisting that they be defined by the degree of sympathy we feel toward them (and there are times when we feel no sympathy for them at all). It sometimes seems as if Hodges has set his characters adrift, as if he were pretending not to care about them at all. But what he's really doing, I think, is shaking the very foundation of our empathy. Faced with a character who does little to endear himself to us, do we distribute our empathy stingily, begrudgingly, just because it's part of what art demands from us? Or do we take the risk (sometimes a very great risk) of giving humanity the benefit of the doubt? Hodges isn't giving us a test with right and wrong answers -- he's not that pedantic. But even within the noirish despair of "I'll Sleep When I'm Dead," there's an optimism in even bothering to ask the questions in the first place.

The first character we meet in "I'll Sleep When I'm Dead" is Davey (Jonathan Rhys Meyers), a dashing young rapscallion and small-time drug dealer who struts around London as if he's certain he'll own it one day. We barely get to know him before he dies, submerged in the bloodied water of his own bathtub, apparently having cut his own throat. He's just been raped by a vicious, insecure, thuggish businessman named Boad (Malcolm McDowell), and in the macho underworld that Davey travels in -- or aspires to travel in -- even the merest taint of homosexuality is a liability (although, notably, the movie never spells out Davey's orientation).

Davey's only relative is his older brother, Will (Clive Owen), a former gangster who, after suffering a breakdown, abandoned both his criminal life in London and his younger brother. He now lives in a van -- he has the unshaven, vaguely deranged look of a mountain hermit -- picking up odd jobs to make a living. Will is a gloomy, troubled, isolated soul, and he knows that seeking the company of other people is out of the question for him. He can't bring himself to go anywhere near the city, and the mere thought of doing so fills him with anxiety. Owen is a subtle, intense actor: You can't see his quaking, but you can feel it as if it were in Sensurround.

When Will intuits that something horrible has happened to his younger brother, he rushes back to London, only to be greeted by Davey's grieving best friend, Mickser (Jamie Foreman, in a small but perfectly tuned performance), who had been entrusted to look after him. To avenge Davey's death, Will begins to piece together what happened to him, reluctantly re-entering the world of mobsters and heavies he used to inhabit. He also reconnects, cautiously, with his old love, Helen (Charlotte Rampling), a respectable restaurateur who understands why Will had to ditch his old life, even though she can't help resenting him for ditching her along with it.

The plot of "I'll Sleep When I'm Dead" sounds more melodramatic, and possibly more sentimental, than it is. Hodges and Preston let the action unfold slowly, almost languidly, the better to wrap small but significant details into the story. For example, we can see that Helen is anything but corrupt -- she's comfortably ordinary and middle-class, which suggests that Will, in his former life as a gangster, must have been attractive to her precisely because of his dangerous aura. It's clear that Will fought (and killed) for any respectability he ever had. But if his very ruthlessness made him a success (and ironed out the class differences between him and Helen), it also drove him mad. Their affair is doomed, of course, but Will's eyes betray a desperate hope that he can resurrect it -- he holds more hope than the wounded but self-sufficient Helen, which only tightens the caul of mournful isolation around him.

Many of the parallels between "I'll Sleep When I'm Dead" and "Get Carter" are obvious, and intentionally so, particularly given that both movies feature chilly, inscrutable men out to avenge the death of a brother. But in spirit and at their core, they're very different: They inhabit the same universe, warily, but only as meticulously mismatched bookends. (Even the journeys of the protagonists are opposites of each other: Jack travels away from London, Will back to it.)

"Get Carter" is so beautifully constructed that it's practically hypnotic. Its structure and craftsmanship draw us in so deftly that we barely have time to sort out for ourselves what the appeal is: Unmoored, we may find ourselves attempting to reckon even with its nihilism as a thing of cold, glittering beauty. And Caine, as the vengeful, empty Jack Carter, gives a chillingly calibrated performance. Somehow, he turns his face into an unreadable landscape of horizontal lines -- a slim slit for a mouth; glittery, narrow eyes that give very little away. It's the kind of performance you wish you could turn away from, but can't.

"I'll Sleep When I'm Dead" has its problems: As beautifully made as it is, Hodges leaves some crucial portions of the story maddeningly unclear, particularly at the end. But "I'll Sleep When I'm Dead" (whose title Preston admits to borrowing from the Warren Zevon song) is a much warmer movie than "Get Carter." In fact, it's a good example of how a work can be warm without even a hint of softness. "I'll Sleep When I'm Dead" is an elegiac movie, but it's flinty, too. Shot by Mike Garfath (also the D.P. on the stunning-looking "Croupier"), the picture is dazzling to behold, which is not to say it's always conventionally pretty. Its daylight scenes shimmer with sunlight and grime. At night (and "I'll Sleep When I'm Dead" is essentially a nocturnal creature), we see inky shadows and sparkly, lit-up streets. In its nighttime scenes, the movie gives the sense of having been washed in the rain, as if it were suggesting that darkness, even with all its murky secrets, is more honest than the ostensibly cheerier light of day.

Owen is a warm actor even when he's playing a rigidly determined character like Will. Will has never made the essential distinction between being macho and being masculine: When he's asked if Davey might have been gay, he responds quickly that he's sure the answer is no. "I would have known," he remarks sensibly, although, of course, we know that it's likely he wouldn't have.

Even so, Owen doesn't play Will as a defensive bully. Whatever his flaws are, his love for his brother stands strong and true. Will is bound by the world he knows, even after he thinks he's left that world far behind. He can't allow himself to be soft, because it's his very hardness that keeps him alive. "I'll Sleep When I'm Dead" opens and closes with the same shot of Will standing on the shore, alone but not alone, looking out to sea -- an echo of the ending of "Get Carter." In between, we've heard Will explaining to Helen that although he's always on the run, it's not fear that drives him. "It's grief -- for a life wasted," he notes simply.

The language may be melodramatic, but the sentiment isn't. In the world of noir, grief is often a great motivating force. While everyone else is off chasing elusive, perfect joy, the noir hero is forced to find contentment, or something that passes for it, in the darkness. In "I'll Sleep When I'm Dead," Will accepts that mission humbly, almost as if he were atoning for Jack Carter's unwillingness to yield to it. They're two characters standing on opposite shores, brothers to each other and yet strangers. Thank God one filmmaker had the chance to give life to them both.