Hail to the Moon king

The deeply weird coronation of Rev. Sun Myung Moon in a Senate office building -- crown, robes, the works -- is no longer one of Washington's best-kept secrets. 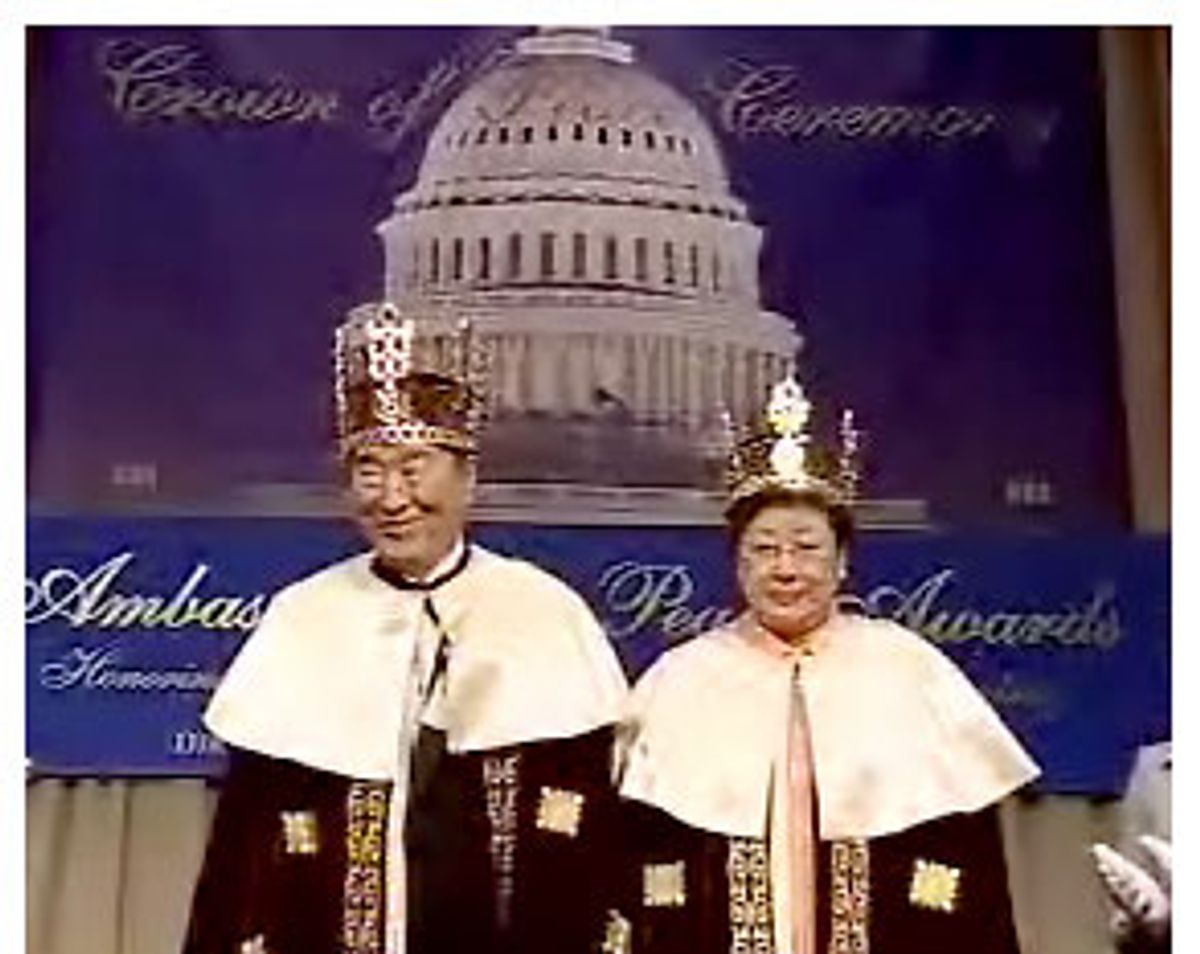 You probably imagine your congressman hard at work in the Capitol debating legislation, making laws -- you know, governing. But your newspaper probably didn't tell you that one night in March, members of Congress hosted a crowning ritual for an ex-convict and multibillionaire who dressed up in maroon robes and declared himself the Second Coming.

On March 23, the Dirksen Senate Office Building was the scene of a coronation ceremony for Rev. Sun Myung Moon, owner of the conservative Washington Times newspaper and UPI wire service, who was given a bejeweled crown by Rep. Danny K. Davis, D-Ill. Afterward, Moon told his bipartisan audience of Washington power players he would save everyone on Earth as he had saved the souls of Hitler and Stalin -- the murderous dictators had been born again through him, he said. In a vision, Moon said the reformed Hitler and Stalin vouched for him, calling him "none other than humanity's Savior, Messiah, Returning Lord and True Parent."

To many observers, this bizarre scene would have looked like the apocalypse as depicted in "Left Behind" novels. Moon, 84, the benefactor of conservative foundations like the American Family Coalition -- who served time in the 1980s for tax fraud and conspiracy to obstruct justice -- has views somewhere to the right of the Taliban's Mullah Omar. Moon preaches that gays are "dung-eating dogs," Jews brought on the Holocaust by betraying Jesus, and the U.S. Constitution should be scrapped in favor of a system he calls "Godism" -- with him in charge. The man crowned "King of Peace" by congressmen once said, according to sermons reprinted in his church's Unification News: "Suppose I were to hit you with the baseball bat to stop you, bloodying your ear and breaking a bone or two, yet still you insisted on doing more work for Father."

What, exactly, drew at least a dozen members of Congress to Moon's coronation? (By the Unification Church's estimate, 81 congressmen attended, although that number is probably high.) The event was the grand finale of Moon's coast-to-coast "tear down the cross" Moonification tour, intended to remove Christian crosses from almost 300 churches in poor neighborhoods -- the idea being that the cross was an obstacle to uniting religions under Moon. Yet the Dirksen ceremony was sold as a celebration of world peace. According to a cheery promotional video released by Moon's International and Interreligious Federation for World Peace, the ceremony marked the dawn of "the era of the Eternal Peace Kingdom, one global family under God." Moon's coronation also cured God's pain, the announcer explains.

By all accounts, most of the congressmen in attendance didn't expect a coronation. Instead, they thought they were heading to an awards dinner honoring activists from their home states as "Ambassadors for Peace." A flier for the event claimed an impressive who's-who of organizers, including Republicans Sen. Lindsey Graham of South Carolina, Rep. Roscoe Bartlett of Maryland and Charlie Black, a top Republican strategist. Democrats were named, too, like Rep. Harold Ford of Tennessee, who, incidentally, claims to have not even heard of the event.

And then there was Rep. Danny K. Davis, D-Ill., the only congressman who has publicly expressed pride in the crowning ceremony, who praised Moon for bringing religious leaders together in his Ambassadors for Peace tours to Jerusalem and beyond. Davis, it was revealed this week in the Chicago Reader, took money from Moon-organized fundraisers, who also gave to a charity of his choice. Davis told an Anglican magazine that Moon's remarks were "similar to a baseball team owner telling team members that 'we are the greatest team on earth'" to get them fired up.

At the time, the surreal event went uncovered by the Washington press corps, save for Moon's own Washington Times, which ran a brief description of the festivities. The story is getting some traction only now, after it was recently reported in the online magazine The Gadflyer. But what transpired at Dirksen two months ago remains a mystery to most Americans -- and those constituents of congressmen who attended Moon's crowning.

The crowning ritual indeed began as a somewhat normal awards ceremony. Ribbons that looked like Olympic gold medals were given to Rep. Bartlett and others. But then it took an odd turn. Rep. Curt Weldon, R-Pa., whose office maintained he did not attend the event until I provided photographs of him there -- spoke beside a photograph of himself pinning an American flag on Libyan leader Moammar Khadafy, back when President Bush was praising him for abandoning WMD programs and before he was suspected of trying to kill the leader of Saudi Arabia.

Then, after Rep. Elijah Cummings, D-Md., gave a speech praising one of Moon's Ambassadors for Peace, the civil rights veteran Rev. Walter Fauntroy, an unnamed Lubovitch rabbi took the stage declaring: "I have never seen this miracle where Jews, Christians and Muslims come together for peace!" Then Moon's cleric Chung Kwak took the mic. Before his days as the commander of the UPI wire service, Kwak, Moon said in a 1997 speech, was authorized to whomp on Unification Church members who slacked off. "Particularly those who are sleeping and hiding, Reverend Kwak's baseball bat will fall upon you at any time," Moon said. Now Kwak was standing in a Senate office building declaring Moon the king of the "second and third Israel."

It might almost make sense for conservative congressmen to honor Moon in this way. After all, a writer in Moon's magazine Insight wrote in February that it's long past time for Republicans to thank the billionaire Korean preacher for his gifts. "[T]he continued refusal of Beltway conservatives publicly to acknowledge their steadfast patron is, of course, scandalous," wrote contributor Paul Gottfried. Moon has sunk an estimated $2-$4 billion into the money-losing Times, and countless other causes -- like Jerry Falwell's Liberty University.

Moon has also made inroads in the Bush administration, as Salon reported last September, with plum appointments for former or present Moon VIPs, and almost half a million dollars in abstinence-only grants supporting Moon's anti-sex crusade. To teach teens that "free sex" is revolting, they're asked by Moon's followers to drink other people's spit out of a cup, and then consider how much more vigilant you must be when sharing other body fluids.

While Moon once focused his energies on anti-Communism, making him popular among Republicans in the Reagan era -- his organization gave the first $100,000 to Oliver North's Nicaraguan Freedom Fund -- he has now shifted gears, aiming left. He's planning a "Peace United Nations" entwining religions instead of countries and is trying to make friends in the Congressional Black Caucus, like Rep. Davis. No congressman, on the right or left, has publicly denounced Moon for his momentous speeches describing his "peace kingdom" as a place where "gays will be eliminated" in a "purge on God's orders" he says will be like Stalin's. And many are surprisingly comfortable around a guy known for over-the-top speeches about the holy "love organ of life" and its various fluids. In a 1994 speech, he asked: "Do you like the smell of your husband's semen? Answer to Father. Does it smell good or bad? You may not like the smell of your wife's stool, but do you smell your own? Why don't you smell your own but you smell your wife's? Because you are not totally one."

But if Moon pulled off his greatest trick on Mar. 23, fooling some unsuspecting congressmen into attending his coronation, it's not as if his stunt was new -- for more than 25 years, Moon has sought to surround himself with powerful people to gain credibility and legitimacy, including presidents Richard Nixon, Gerald Ford and George H.W. Bush. If the congressmen had simply run "Ambassadors for Peace" through the Google search engine, they would have discovered the group was tied to Moon and his grand plans for the future of Christianity -- plans to "reconcile" religions by tearing the Christian cross off church walls and persuading Jews to sign apologies for giving Jesus over to the Romans.

Weldon, for one, had a long time to do that Google search. As far back as June 19, 2003, he's listed in a speech by Rep. Danny K. Davis on the floor of the House of Representatives honoring Moon: "Many of my colleagues will join me and the gentleman from Pennsylvania (Mr. Weldon), co-chair, in giving tribute to some of the outstanding Americans from our districts," said Davis. "We are grateful to the founders of Ambassadors for Peace, the Reverend and Mrs. Sun Myung [Moon], for promoting the vision of world peace, and we commend them for their work."

As for Moon's vision of world peace, there are widespread reports, even acknowledged within Moon's church, of allegations that in 1989 he allowed brutal inquisitions to take place. The inquisitor, a man Moon apparently believed was the reincarnation of his son, was allegedly encouraged to tie people to radiators and beat them. As a result, Moon's trusted lieutenant, Bo Hi Pak, was said to have suffered minor brain damage. Wrote his daughter-in-law, Nansook Hong, in her tell-all book: "Sun Myung Moon seemed to take pleasure in the reports that filtered back to East Garden of the beatings being administered by the Black Heung Jin. He would laugh raucously if someone out of favor had been dealt an especially hard blow." Members of Congress may want to do their homework before they crown their next King of Peace.