The Photoshopping of the president

How a software application brought political satire to the masses. Plus: The candidates' hot-tub embrace and other steamy gallery images. 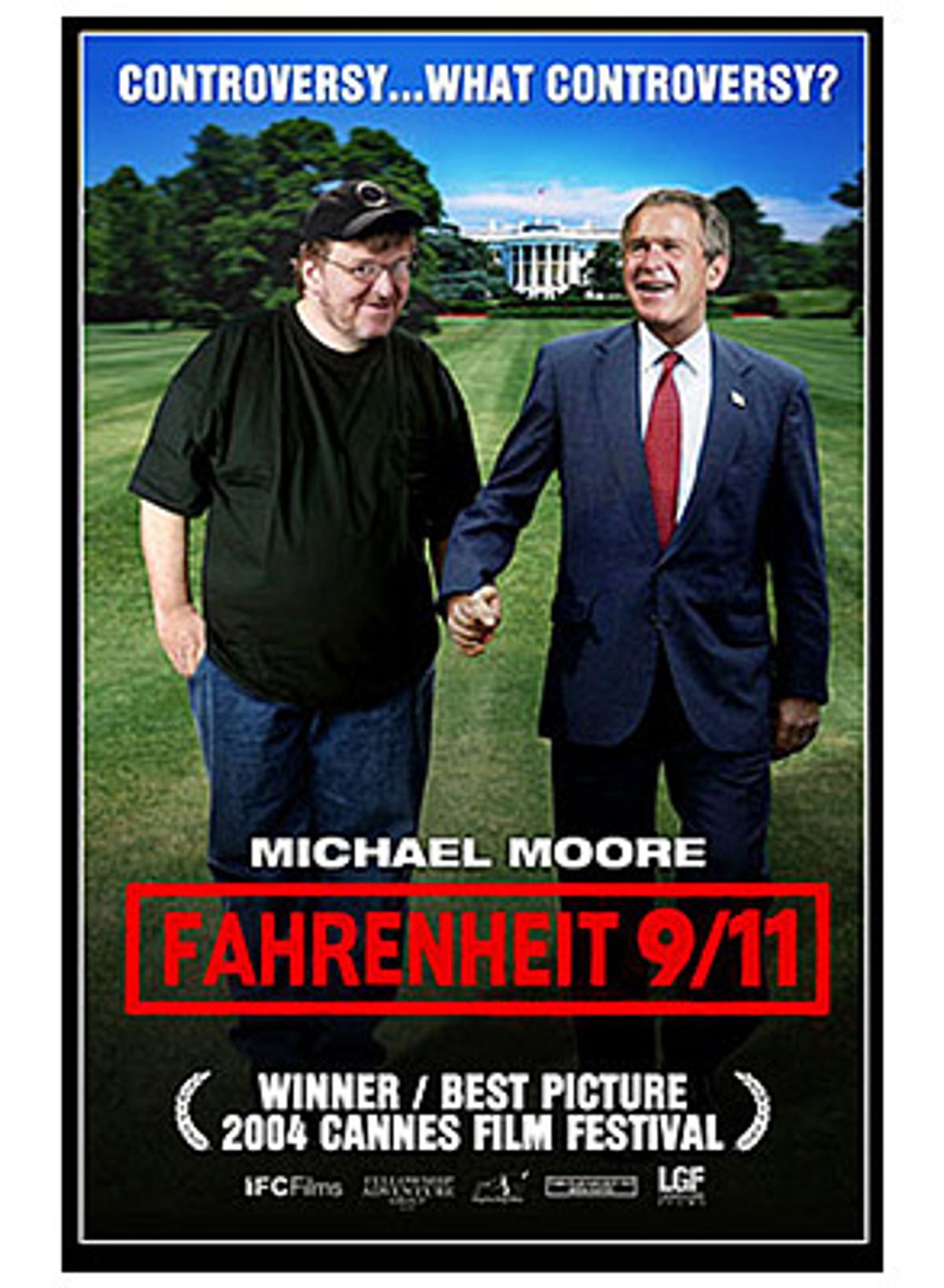 There he is, holding hands with Michael Moore. There he is again, toppling from grace, just like that statue of Saddam Hussein in Baghdad's Firdos Square. And, yes, there again is President George W. Bush, the cannibal father, jawing the head off one of his own children.

Simultaneous with the political rise of our current president has been the mass use of a technical innovation that makes one of the oldest tricks of the humor trade -- sticking the heads of public figures on funny bodies -- easier to achieve, and the results more lifelike, than ever before. Back in the 18th century, William Hogarth ridiculed the ruling class with elaborate paintings and etchings; today, any desk monkey can cut-and-paste a political statement, using Adobe Photoshop or other digital software, and have it circle the globe in a matter of days if it packs a big enough political punch, whether it's placing a McDonald's on Mars or, unnervingly, outfitting the Statue of Liberty with a burqa.

But the most Photoshopped subject of all time is surely George W. Bush. Just last week, Michael Moore launched his buzz-busting "Fahrenheit 9/11" with posters showing him strolling hand-in-hand with the president in front of the White House. Less than a week later, the Nation published a full-page image of the sculptor Richard Serra's appropriation of Goya's "Saturn Devouring One of His Children," with the president's head grafted over the grisly image. "Simple demonization," as conservative pundit Andrew Sullivan alleged, or pointed political satire? You be the judge.

Moore is surely a Photoshop fan, having used it both in his ad for "Fahrenheit 9/11" and for the cover of his latest book, "Dude, Where's My Country?" (which mimics an earlier manipulated image that happened to appear in Salon). But those contributions are barely a dot in the pixellated ocean of Bush images.

In Salon's own exhaustive search of widely reprinted Photoshopped images of George Bush, the most popular ones seem to fall into one of four themes: George Bush as movie "hero"; George Bush as druggie; George Bush as king; and George Bush as gay man -- all of which appear in our sample gallery. And for those of you partisans gleeful at the prospect (and unbothered by the sophomoric nature) of such images, be sure to click all the way to the end. Bush may be the most Photoshopped man of all time, but John Kerry has an emerging image crisis of his own in America's e-mail and Internet message boards, and the phony photo of Kerry with Jane Fonda at an anti-Vietnam War rally -- which duped even the Washington Post -- is only the beginning.

John Knoll, who created Photoshop with his brother Tom in 1989, believes that the program -- originally created as a professional tool for the retouching, resizing and sharpening of images -- has contributed to democracy in two ways: first by allowing desktop publishers to create the same professional-looking color pictures that the big companies were making; and second, by giving people a voice they wouldn't have had before. "It's the inevitable consequence of the democratization of technology," he says. "You give people a tool, but you can't really control what they do with it."

Take the case of "Gulf Wars Episode II: Clone of the Attack," one of the most widely circulated Photoshop images on the Internet. This doctored "Star Wars" movie poster was originally published last December in Mad magazine. But when it leaked to the Internet, several new variations appeared. Most of the people who see this image have no idea it came from Mad; since images like these began their lives as hybrids of images that we consider public domain (like the president's face), manipulators feel no qualms about appropriating them further. A Photoshopper thus faces an odd paradox of fame: The more popular his or her image becomes, the less likely viewers will care where it came from (in compiling our own gallery, tracing down the original artist became virtually impossible).

Web sites such as Fark and Freaking News have popped up to encourage participation in the Photoshop revolution. Offering little more than a list of user-provided news links, these sites provide daily "Photoshopping contests" that urge visitors to create new images according to a specific categories, or to combine two disparate images. It's digital riffing off a recognizable visual theme. To help potential Photoshoppers get started, both sites offer tutorials and skill-improvement techniques.

Henry Jenkins, director of the Comparative Media Studies program at MIT, has tracked the popular use of Photoshop and says that people started using Photoshop as a tool for critical commentary almost as soon as the program became available in early 1990. "The question is not when did it start, it's the scale. We're seeing more and more every year, with a real increase during this election cycle. Both sides are feeling enormous anger; they want to be involved and express their political views."

Despite Adobe's tireless reminders that trademarks are not to be used as verbs or nouns, and that trademarks must never be used as slang terms, over the past few years, Photoshop has broken free of the jargony domain of designers and photographers and has joined the lingo of the people. Urban Dictionary, an online slang dictionary that asks users to submit definitions, defines "photoshop" as "A program made by Adobe used to manipulate images. Also a term for an image manipulated with the software, which is usually a combination of two or more unrelated images (as in, Dude, he photoshopped Hitler's face onto Clinton's body! That is totally ninja!)."

Steven Heller, a design critic and historian, and co-author of "The Designer's Guide to Astounding Photoshop Effects," points out that the concept itself is not new: "Image manipulation is a historically venerable thing to do. It goes back to the 18th and 19th centuries, when paintings were manipulated in such a way, they would take court paintings and paint over them in such fashion."

But won't these images eventually wear thin? Aren't we getting tired of seeing, for example, George W. Bush kissing Tony Blair, or John Kerry dolled up like Herman Munster? "It used to be that you saw something done in Photoshop and you'd immediately forward it, for the sheer novelty of it," says MIT's Jenkins. "Now people are more discriminating. In the same way that we don't cut out every political cartoon and stick it on our refrigerators, we no longer forward every Photoshop image we receive. But when the image clicks, they can both be powerful ideas about the political moment."