The smile vs. the scowl

The Edwards-Cheney debate will offer one of the starkest contrasts since Clay fought Liston. 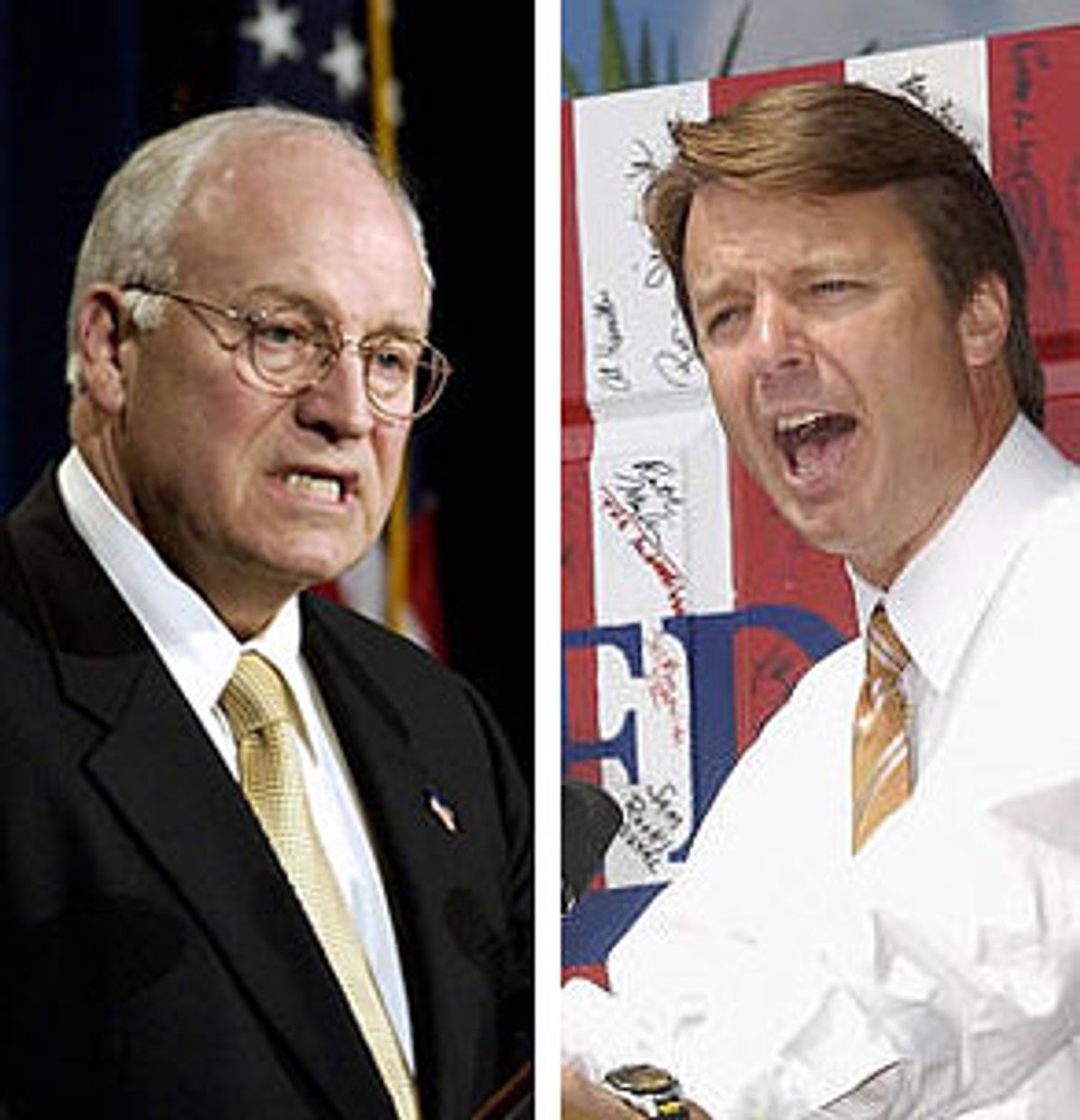 It was late January in Columbia, S.C., and a friendly crowd was turning ugly on John Edwards. The event should have been a natural for Edwards, a town-hall meeting where the Democratic presidential candidates could talk one-on-one with average people -- poor people -- about the problem of poverty. But a few minutes into Edwards' time onstage, the moderator turned against him. "You talk about 'two Americas,'" he said, but isn't it true that you're a millionaire trial lawyer with a couple of multimillion-dollar homes?

The crowd smelled a phony in their midst. Their hoots and "gotcha" groans drowned out the first bit of Edwards' response, but the senator kept talking. He told the crowd about how he was born the son of a mill worker, how his father had to borrow money to bring him home from the hospital, how he had worked his way to a better life by representing little people against big corporations. He told them that the Bush administration was eliminating opportunity for poor kids like the one he once was.

The moderator tried to cut him off, but Edwards wasn't done. "You have to let me finish," Edwards said. "You asked me the question." Edwards turned back to the crowd. "I grew up the way you grew up," he told them. "I come from the same place ... I will never forget where I come from, and you can take that to the bank."

By the time Edwards was finished, he had turned the crowd around. The jeers became shouts and then thunderous applause, and Edwards left the hall in triumph.

It was a fleeting moment in a presidential campaign Edwards would eventually lose. But it was exactly the sort of moment John Kerry had to have in mind when he selected John Edwards to be his running mate Tuesday. For all of the talk about what Kerry wanted in a vice presidential candidate -- a proven leader, committed to Kerry's agenda and prepared to assume the presidency at a moment's notice -- what Kerry got was an appealing young populist who can inspire true believers and win over the doubters.

What he got was the opposite of Dick Cheney.

And in an e-mail message to supporters Tuesday morning, Kerry seemed to acknowledged that that's exactly what he wanted. Kerry said not a word in the e-mail about what a great job Edwards might do as vice president. Instead, he spoke only of Edwards as a candidate, as a foil to the sitting vice president. Kerry didn't say he was eager for the day that he and Edwards take office; he said he's eager "for the day this fall" when Edwards "stands up for our vision and goes toe-to-toe with Dick Cheney."

That day will presumably come on Oct. 5, the date the Commission on Presidential Debates has set for the 2004 vice presidential debate. When it does, it will present to the voters the starkest contrast between vice presidential candidates -- perhaps between any kind of candidate -- that they have seen in any national election in memory.

Kerry and Edwards will start appearing together today, two fit and youthful men offering up a Reaganesque, "the best days are ahead of us" vision of America. Kerry, on the stump, speaks longingly of the day when America is not just feared but respected, a day when America "can be America again." The message fits well with Edwards' "two Americas" speech, so well that one might suspect Kerry has known for weeks or even months that he would ultimately ask Edwards to join him.

Bush and Cheney seldom appear together, perhaps out of security concerns, or perhaps because Cheney's appearance at times diminishes Bush's. When Cheney does campaign, he seems to do so reluctantly; if every campaign stop seems like a day at Disneyland for Edwards, it looks like a visit to the proctologist for Cheney. As the New York Times noted over the weekend, Cheney seems to view campaigning as a chore, speeches something to get through. He reads from notes, seldom looking up, and when he's not reciting dry statistics about the economy, he's warning darkly that "the enemy" is everywhere and might strike at any minute.

"I can't imagine two human beings that are more polar opposites than John Edwards and Dick Cheney," said Alan Schroeder, a professor at Northeastern University and expert on presidential debates. "I see Cheney as this dour character who exists on the dark side, with a sense of suspicion and almost paranoia about him, and then you've got the sunny optimist Edwards, who was very reluctant to criticize his opponents in the primaries, never went negative, and had a message that was serious but not the least bit paranoid. There is so much that's different in their personalities and their politics; their debate could be an unpredictable, volatile mix of elements."

Of course, Democrats hope that the debate will be more than unpredictable and volatile; they hope it will be a chance -- perhaps their best chance -- to put a human face on the differences in policy and attitude that divide Kerry and Bush and to call the administration to account for its actions both at home and abroad.

"The one thing that has not happened with either Bush or Cheney is that neither of them has been directly confronted with their record in a systematic way," Schroeder said. "If Edwards can do that with a prosecutorial approach, it seems that would be a smart thing."

Vice presidential debates can bring memorable moments that cement the reputations of the participants. Bob Dole got so nasty in his 1976 debate with Walter Mondale -- Dole said that 1.6 million Americans had been killed or wounded in "Democrat wars" -- that he was still trying to recover when he debated Bill Clinton for the presidency 20 years later. George H.W. Bush came off as sexist, patronizing and strangely flustered in his 1984 debate with Geraldine Ferraro, and Lloyd Bentsen's "You're no Jack Kennedy" dismissal of Dan Quayle in 1988 was so withering that, four years as vice president notwithstanding, it's what most of us remember about Quayle if we remember him at all.

But for all the highlight-reel material -- don't forget Adm. James Stockdale's weird existential crisis in 1992 -- it would be hard to argue that a vice-presidential debate ever changed the outcome of an election. Says veteran Democratic strategist Paul Maslin: "We all got excited about Lloyd Bentsen, but Bush still won by eight points."

If the debate takes on greater than usual importance, Edwards seems uniquely suited to the task. An experienced trial lawyer, he's familiar with the skills of cross-examination and knows how to do it in a way that appeals to a jury -- or to voters. When Edwards ran for Senate against Lauch Faircloth, the inarticulate incumbent Republican was so daunted by Edwards' abilities that he refused to debate him at all.

Judging from Edwards' performances in the Democratic presidential primaries, that may have been a good call. While Edwards was not the most contentious of the Democratic debaters, he showed on a few occasions that he could make a telling point when needed -- and sometimes at Kerry's expense.

At the Democratic presidential debate in Milwaukee in February, Kerry was asked whether, having voted to authorize Bush to go to war in Iraq, he bore some responsibility for what eventually happened there. As is his wont, Kerry offered a long, nuanced response that drew on Vietnam, Kosovo, Haiti and the War Powers Act, but he never actually answered the question. Given the chance to follow up, Edwards smiled and said: "That's the longest answer I ever heard to a yes or no question."

As the laughs died down, Edwards turned serious: "The answer to your question is -- of course. We all accept responsibility for what we did."

That's not to say that Edwards is the perfect debater. At the Milwaukee debate, he followed his solemn line about the war with a glib, out-of-place knock on Kerry for assuming victory in the primaries before the votes were cast. And Edwards' boyish looks and gosh-golly smile can lead voters to wonder about his gravitas.

Kerry raised doubts about Edwards' experience during the primaries, suggesting -- as the Republican attack machine repeated ad nauseam Tuesday -- that Edwards might still have been in diapers when Kerry was fighting in Vietnam. While Kerry has apparently moved past such concerns, voters might not, especially if Edwards looks too young or unprepared in debate with Cheney.

While many Democrats think of Cheney as the dark prince of neocon dreams, the grim little man behind the curtain at the White House, the Democrats' vilification of the vice president can lead to false confidence. Just as Kerry did Tuesday, Democrats have talked excitedly for weeks about the day Edwards goes up against Cheney. Will Marshall of the centrist Progressive Policy Institute warned Tuesday against too much optimism.

"Cheney comes off almost like a candid CEO rather than a politician talking to you," said Marshall, who watched the vice president calmly defeat his preferred candidate, Joe Lieberman, in a sleepy debate four years ago. "Cheney is self-effacing in the right places, but kind of steely, ready with some smooth comebacks and barbs. He'll be good, and we shouldn't let the fact that Cheney has become a bugaboo to many Democrats let us underestimate him. He will be the voice of experience, worldly wise, quietly shaking his head, and he will do everything he can to portray Edwards as a callow youth who doesn't understand how the world works."

The experience card plays two ways, however. It's great to tout your experience in office, but it only works if voters think you've done a good job. With Bush's approval ratings in the tank, with Iraq still a mess and new jobless numbers suggesting that the economic recovery isn't all that the White House might like it to be, Cheney's ability to trump Edwards on record and experience may be limited. "Cheney may have more experience than Edwards, and of course Bush does too at this point," said Ruy Teixeira, a senior fellow at the Century Foundation and the Center for American Progress. "That all would have been great if they had never invaded Iraq and this was a year after Sept. 11 and they were still riding high. Cheney could say, 'Look at this young pup,' and 'How do you know what you're talking about.' But that time has passed."

Teixeira says the only way Edwards can lose to Cheney is if he defers to him too much, like Lieberman did four years ago, or if he appears intimidated by him. "He should go right after them," Teixeira said. "Cheney is less popular than he used to be, and his unfavorables have gone up dramatically over the last four months, especially among independents."

Edwards can score points, Democrats say, by pushing Cheney to explain his role in the administration. Why was Cheney, not Bush, giving an order to shoot down airplanes on Sept. 11? Why is he still insisting that Saddam Hussein had a meaningful relationship with al-Qaida? Why did everything Cheney predicted about Iraq -- and especially that part about being greeted as liberators -- turn out so wrong?

"Edwards' substantive message in the campaign will be talking about crony capitalism and 'two Americas' and who's getting rich and who's not," Teixeira said. "I can't think of anyone better to bring this up with than Dick Cheney."