The glitter of Camelot has been lost in Antoine Fuqua's valiant quest for historical accuracy, but Keira Knightley does prance around in a leather bikini. 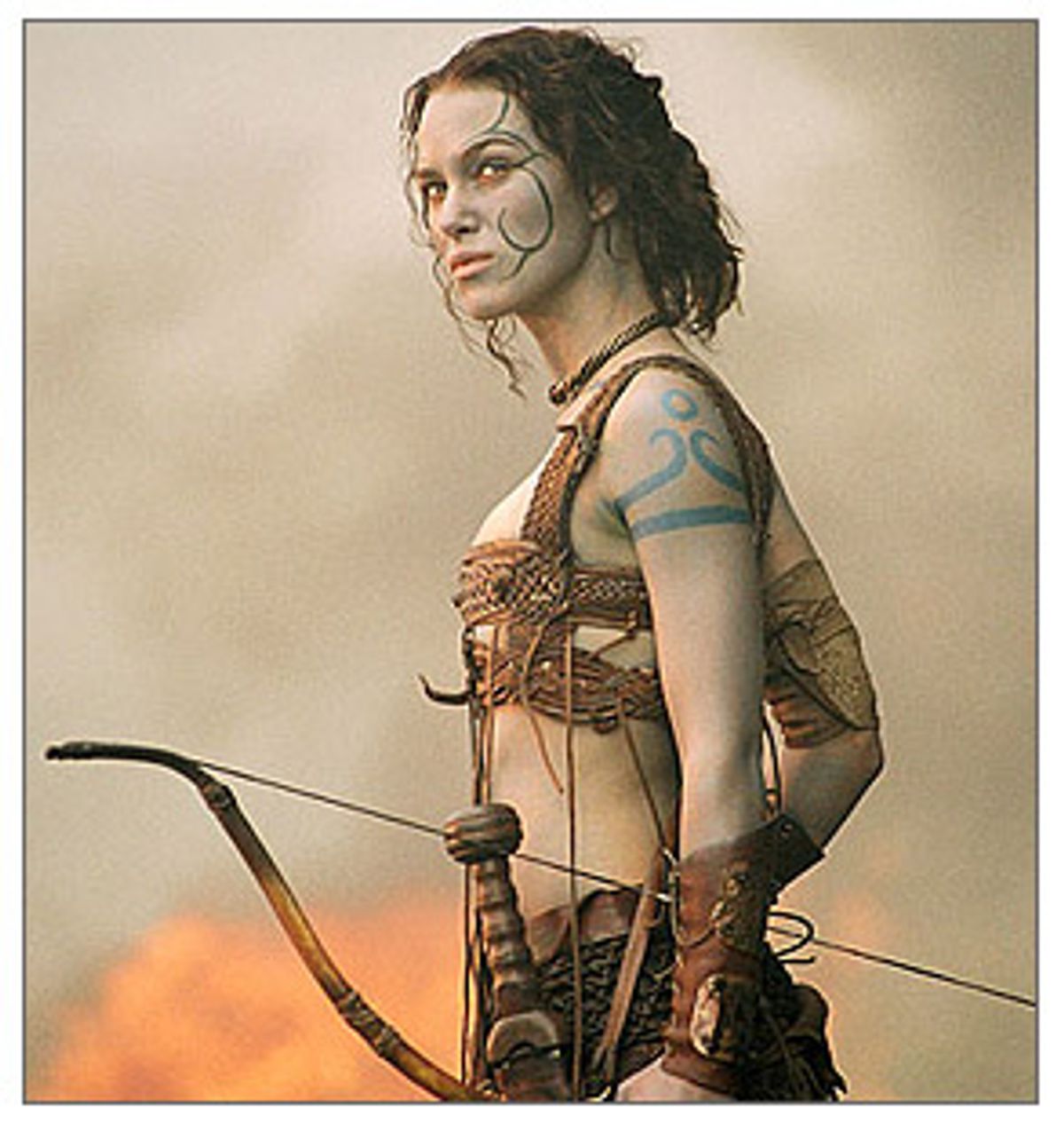 The big selling point of Antoine Fuqua's spin-cycle epic "King Arthur" is its claim to authenticity. If you're looking for the glitz and glitter of Camelot, you've made a wrong turn, because this "King Arthur" takes place not in Great Britain's glamorous Middle Ages but in its far less dazzling Dark Ages -- the 5th century, before the invention of soap. (They didn't call it the Dark Ages for nothing.) In "King Arthur," faces are permanently and realistically smudged; there is much wearing of rough, nubby cloaks and dingy chainmail, reinforcing the hopelessness of it all. Merlin isn't a glam-rock wizard but an all-knowing warrior king who wears blue lipstick. Primitive beliefs abound; savage enemies lurk, their dusty beards arranged in threatening plaits, waiting for the right opportunity to burn the villages, just for kicks. The Britain of "King Arthur" is a country sitting in the dark, waiting for something to happen. The audience can relate.

The figure we know as King Arthur is said to be a composite based on various shadowy warrior and chieftain types of 5th century Britain; whoever Arthur was, he made his way into the culture as a symbol of bravery, honor and idealism. And so, in its intentions at least, Fuqua's "King Arthur" is more historically accurate than, say, the magnificently flawed but heartfelt "Camelot" or John Boorman's bloody, passionate extravaganza "Excalibur." But it's hard to care about a valiant groping for accuracy when a story is so badly told you can't tell what the devil is going on. And more important, sometimes legends resonate for good reason. Does monkeying around with them necessarily improve them? Do we really need to know the true Hollywood backstory of King Arthur?

Whether we need it or not, we've got it now. Clive Owen is Artorius, or Arthur, the half-Roman, half-British commander of a band of rugged warriors who have been pressed into the Roman service. (They're part of a tribe of warriors called the Sarmatians, who hail from part of what's now Russia; in the movie there are seven of them, although 101 would have had a better ring to it.) Rome catches wind that the Saxons are planning to invade Britain from the north; Arthur gets the order to drive them back. Meanwhile, the forests of Britain teem with mysterious tree people, native folk who paint fierce lines on their faces and seem grumpy that either Romans or Saxons should have the nerve to interrupt teatime. These are the Woads (perhaps better known, in real life, as the Picts). Saxons, Woads, Romans: Nobody manages to get along. Only Arthur, having studied the words of the heretical theologian Pelagius, has a larger vision: "His teachings on equality and freedom will have been a great influence," he intones knowledgeably.

The line may as well have been carved from a block of wood, and not even Owen, as fine an actor as England has given us in the past 10 years, knows what to do with it. David Franzoni ("Gladiator") wrote the script, and he and Fuqua move the action along, stumpily, with lines like "A massive Saxon incursion has begun." Fuqua's "Training Day" was low on substance, but there's no question that it moved. Instead of going on to make better movies, he forged ahead to make worse ones, like the absurd and offensive "Tears of the Sun."

"King Arthur" doesn't have the balls to offend -- it has no verve or vigor. It's one long, sullen foot-march, interspersed with numerous murky battles whose outcomes we can't bring ourselves to care much about -- probably because it's impossible to know who's fighting for what, and why. Arthur repeatedly mutters stuff about "equality" and "freedom," notions he's presumably ripped from the pages of Pelagius, but it's hard to see how those buzzwords connect with the presence of Woad warrior girl Guinevere (Keira Knightley), wielding a bow-and-arrow while clad in a bikini bandeau made of a few strips of woven leather. Even that image is surpassed, I'm afraid, by the sight of the ruthless Saxon leader Cerdic (Stellan Skarsgård, who half-croaks, half-hisses his lines, like an uncharismatic, incomprehensible Kris Kristofferson) announcing, after meeting Arthur face to face for the first time, "Ah, finally! A man worth killing!" Then he turns on his heel to face the camera -- in long shot, so we can adequately grasp the breadth of his manhood -- and beats his chest with a mighty thump.

"King Arthur" also gives us a sullen, lumpy Lancelot (Ioan Gruffudd), who has little reason to exist, period. He's Arthur's best friend, but why? They clash, but why? Fuqua never bothers to explain, and although he hints at a little Guinevere-Lancelot frisson, it's Arthur that Guinevere has her eyes on. (He rescues her from the estate of a corrupt Roman, where she has been held prisoner; as she's being spirited away in a little wooden cart, she peeks out to get a glimpse of Arthur on horseback beside her, evidently finding him quite a manly specimen. Later, they clutch at one another, making mad, uninhibited Dark Ages love -- she traces his battle scars with a knowing finger.)

Of the so-called Round Table knights, only the jovially gruff Ray Winstone ("Sexy Beast") makes an impression (particularly with his line about having so many bastard children he gave up naming them and simply assigned them numbers). And while there is a round table in "King Arthur," it seems to exist only so a visiting Roman dignitary can express outrage that he hasn't been seated at the head: "A round table! What kind of evil is this?" he exclaims. The roundness of the table is the least of his problems. He should be a lot more worried about the squareness of the movie.