Oh, the stories he could tell! 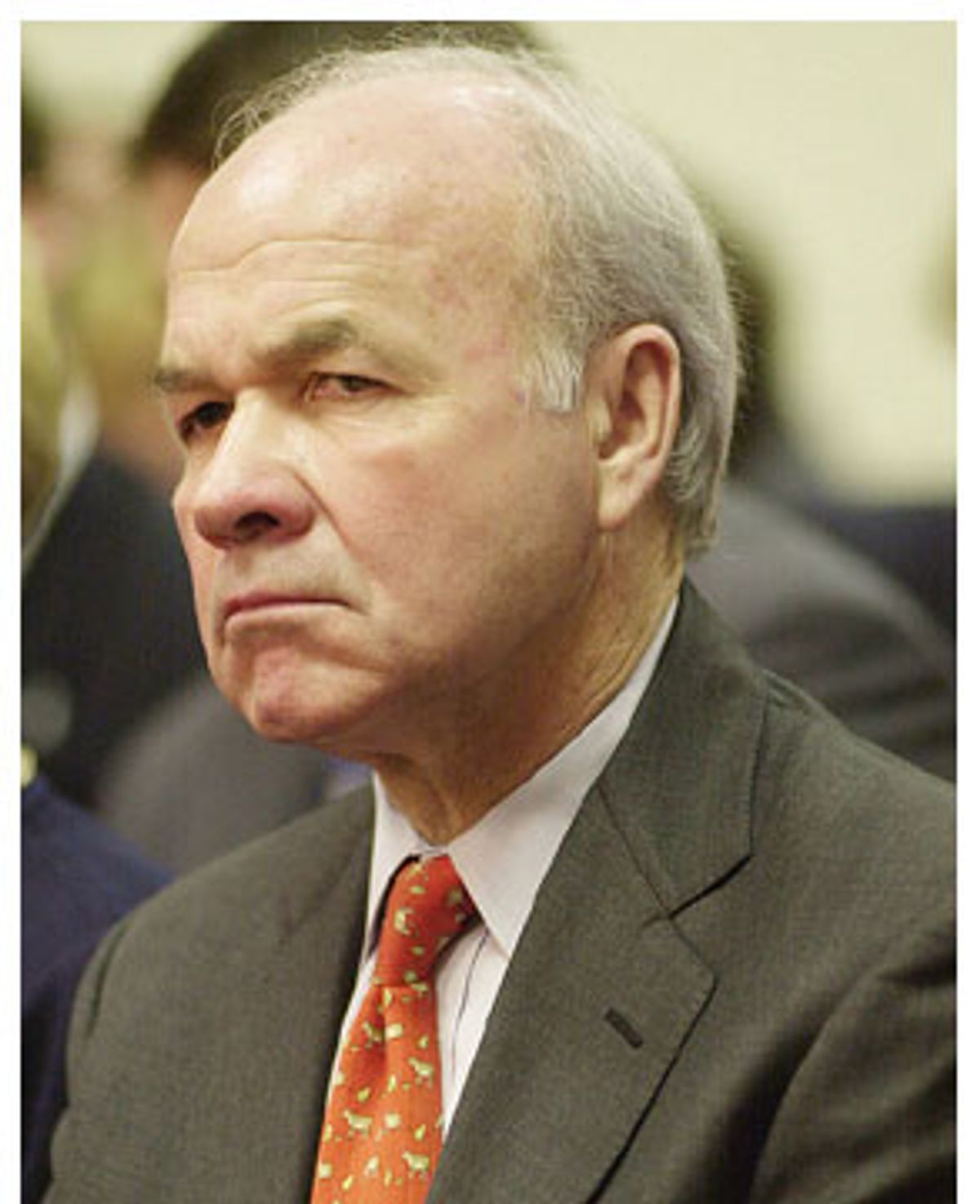 Now that former Enron chairman Kenneth Lay has been indicted for his role in the company's downfall (the specific charges are to be unsealed Thursday), the question that needs to be asked is: Will he turn against the Bushes?

Lay recently told the New York Times that it was a "tougher decision not to indict me than to indict me." Indeed, for the Bush administration, Lay's indictment is the perfect Machiavellian political move. Once the presumably humbled, handcuffed Lay has been paraded in front of the news media, Justice Department prosecutors are likely to give statements to the press saying, in effect, that they're going after all of the Enron miscreants -- even the ones who are friends of President Bush and his father.

But what if Lay responds with his own Machiavellian move? Others crossed by George W. Bush have decided to speak out rather than stand by quietly. Paul O'Neill did so after he was forced out as treasury secretary. The Bush administration's chief of counterterrorism, Richard Clarke, also emerged as a critic. Both men wrote bestselling books and got a measure of revenge. Lay could do the same. And while his brigade of lawyers would obviously advise him to keep quiet, Lay could choose to ignore them. He doesn't have much to lose.

The grand jury that issued his indictment took more than two years to return a true bill. It's unlikely that it will be able to hit him with additional charges out of spite. Furthermore, the man President Bush used to call "Kenny Boy" is already a pariah in Houston, a town he used to own. He has become something of a recluse -- shuttling between his lavish condo in the heart of Houston's exclusive River Oaks neighborhood and a lavish office nearby. He'll never get another job in corporate America. As a political player, his future prospects are nonexistent. So why not provide an inside look at the way politics is really played in a place like Enron -- a company that, for years, was Bush's biggest career patron?

Lay could dish the dirt on several important topics: the Karl Rove-brokered push that resulted in Enron paying Christian conservative turned super-lobbyist Ralph Reed $300,000; Lay's dealings with secretary of state turned super-lobbyist James Baker; why Enron hired Ed Gillespie, the man who now heads the Republican National Committee; the reason for Lay's decision to allow the Bushes to use Enron's fleet of airplanes as their own; what happened in those meetings with Dick Cheney and his energy task force; and what really happened with the California energy crisis.

In 1997, Rove, Texas Gov. Bush's closest political advisor, went to someone at Enron and asked that person to hire Reed, who was just leaving his job as head of the Christian Coalition. The Enron gig was very important for Reed. As one of his first clients, Enron gave his new outfit, Century Strategies, instant credibility. It also put Reed squarely on the Bush/Rove/Lay team. And in those days, as Bush was cranking up his presidential run, having Reed on his side was critically important.

Lay could explain why Enron decided to hire Reed. He could tell us whether Rove offered him any quid pro quo. He could also offer his opinion on whether Reed was worth the expense and describe exactly what Reed did for Enron. Finally, he could explain why, just a few months before Enron filed for bankruptcy, Reed was given an additional contract, this one paying him $30,000 per month plus expenses.

While Reed was a good ally for Enron, the really big-name lobbyist was Baker. Lay hired the former secretary of state (then back in Houston) in early 1993, just 33 days after the first Bush administration left the White House. Lay put Baker to work lobbying for contracts in Kuwait, Turkey, Qatar and Turkmenistan. But it's not at all clear that Baker knew what he was doing. One former Enron employee who specialized in developing power plants told me that Baker didn't know anything about the electric power business and that the only reason Lay hired Baker was that he wanted to be Baker's pal.

In fact, Baker and Lay did become chums. A short time after Baker went on Enron's payroll, the James A. Baker III Institute for Public Policy at Rice University began awarding the prestigious Enron Prize -- an honor that soon was bestowed on a variety of Bush family friends, including Colin Powell, Mikhail Gorbachev and, just before Enron's bankruptcy, Federal Reserve chairman Alan Greenspan.

Lay could tell us what Greenspan said when he refused to accept the crystal trophy and cash award that came with the Enron Prize. He could also divulge another secret: the amount of money that winners of the Enron Prize have received.

Lay could tell us exactly how lucrative the revolving door has been for Baker -- the man who, for decades, has been the Bush family's political consigliere. Sources at Enron told me that Baker demanded huge sums of money for his work. In one case, an Enron subsidiary had sought an oil concession in India. The project's managers wanted Baker to call a certain minister on their behalf, but learned that it would cost them $500,000 for the contract and $500,000 for the phone call, according to a former Enron employee who worked on the deal. Enron didn't use Baker on that deal, but he did work on several Enron projects. Baker has trouble remembering how much he was paid. A few months ago, he told Texas Monthly that he was given a "base fee" and a chance to collect a "success fee" but that he "never got a success fee." Surely Lay could refresh Baker's memory.

Lay could tell us why Enron needed a lobbyist like Gillespie. In 2000, Enron paid Gillespie's firm, Quinn, Gillespie & Associates, $700,000 to lobby the White House on the ongoing energy crisis in California. As with Baker, Lay could explain whether Gillespie -- who is now one of Bush's lead attack dogs at the Republican National Committee -- earned his keep. Or Lay might tell us that Gillespie was just another in a string of hires made to appease the powers that be in the Republican Party.

Lay might discuss why Enron was so eager to fly the Bushes around the country. In 2000, Enron provided jet service to the Bush campaign on an ongoing basis. The company's fleet of six jets had already been made available to George H.W. and Barbara Bush whenever they wanted to fly to Kennebunkport, Maine, and other destinations. But the key use of Enron jets came during the Florida recount, when Enron provided jets to the Bush campaign on four occasions.

Lay could detail the cost of all those airplane trips. (The campaign reimbursed Enron about $73,000 for use of the planes, but the actual cost was far greater than that.) More important, he could explain exactly what he hoped to get in return for all that air taxi work.

Perhaps the most intriguing information Lay could impart involves his meetings with Cheney and his energy task force in early 2001. Last month, the U.S. Supreme Court ruled that a lower court should decide how much Cheney must disclose about the meetings that took place prior to the release of the National Energy Policy Development Group's final report, "Reliable, Affordable, and Environmentally Sound Energy for America's Future." That report, released in mid-May of 2001, contains a number of provisions favorable to Enron. For instance, the report recommended the creation of a national electricity grid, a move that would have allowed Enron to trade electric power more readily in all regions of the country. The report also promoted legislation to create a market-based program for trading of pollution credits. When the report was released, Enron was one of the biggest traders of pollution credits in the world. (In early 2001, the company paid the Environmental Protection Agency more than $21 million for pollution credits in sulfur dioxide. Enron bought 45 times more credits than any other company participating in the auction.)

Or better still, what might Lay tell us about the California energy crisis? Some may recall that Lay had a private meeting with Cheney on April 17, 2001, to talk about the state's energy markets, which were reeling from skyrocketing power prices. During the meeting, Lay told Cheney that the federal government should not impose any restrictions on the markets. His memo to Cheney said that "the administration should reject any attempt to re-regulate wholesale power markets by adopting price caps." Even temporary price restrictions, the memo argued, "will be detrimental to power markets and will discourage private investment."

Cheney immediately began parroting Lay's argument. The day after the meeting, Cheney mocked the idea of price caps during an interview with a reporter from the Los Angeles Times, saying caps would provide only "short-term political relief for the politicians." He also said they would discourage investment, a matter Cheney called "the basic fundamental problem."

Today we know that one of the fundamental problems with the California energy crisis was that traders from Enron and other energy companies were manipulating power prices at their whim -- and that they liked to joke about how they were taking money from those "poor grandmothers in California." Lay could tell us when he first learned that his traders were making huge profits by scamming California's gas and electricity markets.

Finally, Lay could tell us what a White House sleepover is like -- the quality of the sheets, if you get room service, all that stuff. He got that rare privilege during the first Bush administration, when the elder Bush was working hand-in-glove with Lay to give the energy business more tax breaks. Now that Lay has been indicted, he doesn't have to worry about being invited back to the White House anytime soon.