"Anchorman: The Legend of Ron Burgundy"

The '70s-era leisure suits and noisy polyester shirts aren't the only thing that's funny about this Will Ferrell flick. 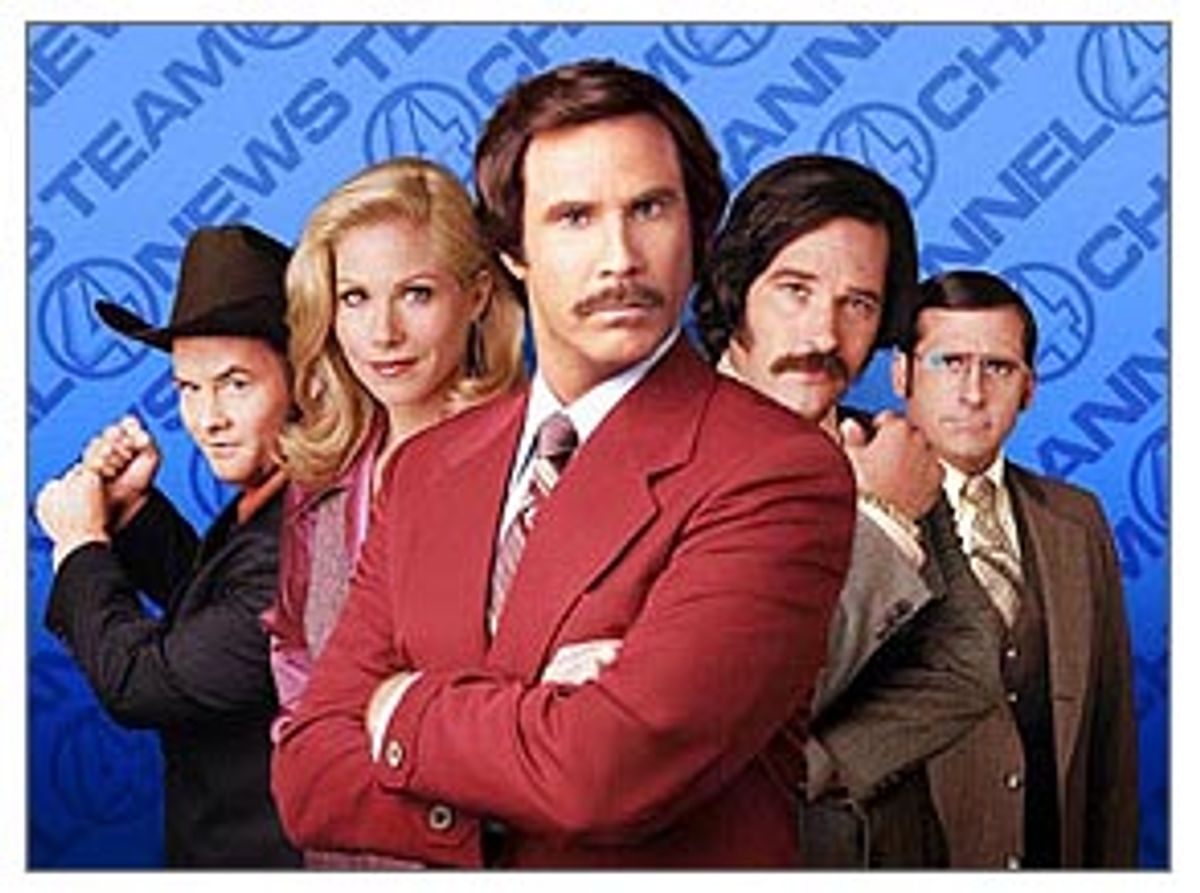 Even people who actually lived through the '70s and know they weren't just about leisure suits and noisy polyester shirts have a bottomless affection for mocking the era. The '70s are the one decade we can hang all our mistakes on with impunity: Watergate opened our eyes so wide we could no longer see straight, but still, we insisted we were fine. Confident despite having had our lights knocked out by our own president, we teetered through the decade in platform shoes; our blurry vision caused us to perm our hair, badly. Today, older and wiser and hip to the benefits of natural fibers, we see exactly what happened: Our taste may have been bad, but it was all Nixon's fault.

And so one of the freedoms we're able to enjoy today is the right to giggle at Will Ferrell in the amusingly preposterous "Anchorman: The Legend of Ron Burgundy." "Anchorman" is set in '70s San Diego; Burgundy is a local-news anchor who, both on and off the air, speaks with such stentorian authority and controlled geniality that you don't immediately notice that his brain has the same shellacked airiness as his hair. Burgundy signs off his newscasts with a mindlessly slick tag line: "You stay classy, San Diego!" On a first date, he assuredly informs his lady friend that San Diego was founded by Germans, and its name means "whale's vagina." When she suggests that he might be just a little bit wrong, he offers a patronizing, glazed smile and chirps, "Agree to disagree!"

When an ambitious anchor-wannabe shows up on the scene -- she goes by the plush purple-velour name of Veronica Corningstone, and she's played with prickly voluptuousness by Christina Applegate -- Burgundy's position as TV king bee is threatened. Similarly, his all-male news-team buddies (they're played by Paul Rudd, David Koechner and Steve Carell) are primed to make passes at her but have no intention of accepting her as a colleague: As far as they're concerned, this women's lib business has gone too far.

"Anchorman" was co-written and directed by former "Saturday Night Live" head writer Adam McKay (it's his first movie; Ferrell co-wrote the script), and it has a pleasing, noodly elasticity about it -- the picture knows what its limits are and proceeds to boogie unself-consciously far outside them. That's how you get a scene in which a wiry-haired Benji-like pup converses via subtitles with a grumpy Kodiak zoo bear who has been awakened from hibernation by careless, noisy humans. ("We bears are a proud race!" he growls in Kodiakese. "They must pay for their intrusion!") McKay and his actors have a great deal of fun with newscasterspeak, and they may even be suggesting, slyly, that the '70s were the beginning of the end of the era when newscasters acted as if they might possibly have usable brains in their heads. Burgundy, for example, ends one newscast with a valley-girl-style "I'm Ron Burgundy?" because some joker has typed a question mark instead of a period on the teleprompter.

Ferrell is an exceedingly likable comic actor, perhaps because he doesn't approach the characters he plays as mere assemblages of tics and shticks. When we first meet Burgundy, he comes off as an idiot blowhard, which would have been the most facile way to play the character. (He comes on to a poolside cutie by declaring, "You have an absolutely breathtaking heinie," and, when he strikes out, adds, "I don't know how to put this, but I'm pretty important.") But Ferrell also knows how and when to pull back -- he never becomes unbearably obnoxious. Burgundy tells his friends that he and Veronica, who have begun a "discreet" workplace romance, have taken up that new fad, jogging -- "Or yogging. It might be a soft 'j,' I'm not sure." Without ever being nauseatingly endearing, he pokes at the way all of us, at one time or another, yearn to seem more sophisticated than we really are.

Then again, sophistication is all relative, as we learn from Paul Rudd's character, caterpillar-sideburned man-on-the-scene correspondent Brian Fantana -- he's the ladies' man who keeps an array of after-shave bottles behind a secret faux-bookcase panel in his office. (He eschews "London Gentleman" for "Sex Panther," and rues his mistake.) The most outlandish performance of all, though, may be Steve Carell's as Brick Tamland, the weatherman with the Q-tip-size IQ. Whatever Brick says, he says brightly, with an alert, chipmunky gleam in his eye, even though what he's saying doesn't connect with anything in reality. When he hears that a woman is about to join the news team, he puts in his two cents -- "I read somewhere that their periods attract bears" -- and a beat, or perhaps a beat and a half, goes by before you realize that his two cents is really something short of a quarter of a penny. Miraculously, Carell (maybe best known for his appearances on "The Daily Show With Jon Stewart") makes the gag work over and over again without wearing it out. If anything, it gets funnier.

"Anchorman" loses shape in its second half, and its unruly goofiness starts to wear a little thin. But McKay and his actors keep pitching, and somehow, it all hangs together. And while "Anchorman" finds plenty that's funny about the '70s, unlike recent nostalgia retreads like "Starsky & Hutch," it doesn't rely relentlessly on fat sideburns and zigzaggy lapels for its laughs. Which isn't to say the clothes, particularly those worn by the men, pass without notice. At one point Ferrell appears in a powder-blue shirt-jac that's so chalky and stiff, it almost looks as if it's been cartooned in. As anyone who's been there can tell you, in the '70s some people really did wear clothes like that. If nothing else, it's just one more thing to blame on Dick.