The king and queen of lower Manhattan

It was the night of the '77 blackout, and Natalie and I found ourselves naked between the twin towers. 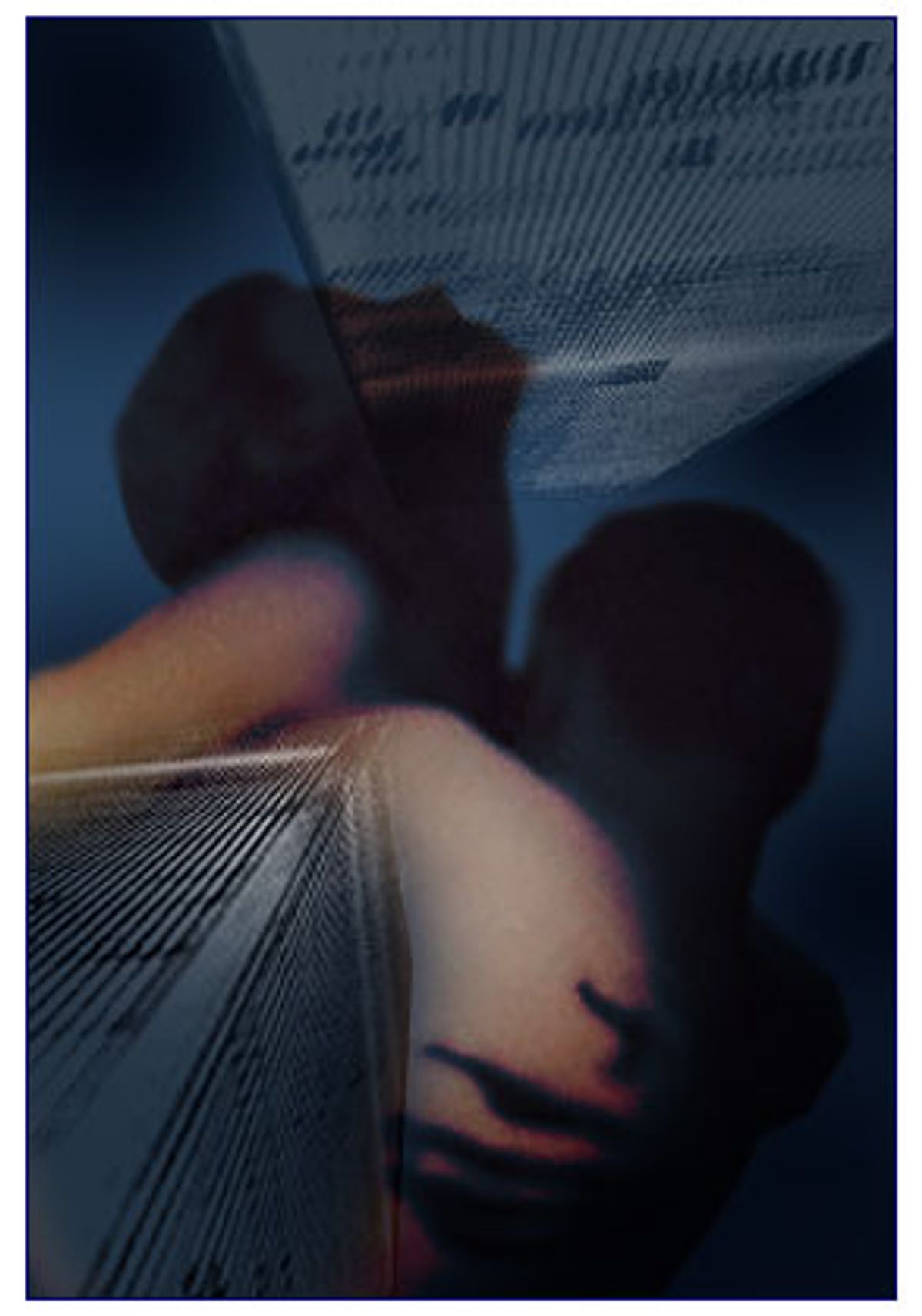 About six months ago, an old friend I haven't heard from in 20 years contacted me via e-mail. Her name is Natalie. I met her in a New England boarding school where we were both teenage poets. A year after graduation, I lived with her for a summer in Manhattan. It was 1977. Son of Sam's summer. The summer Elvis disappeared. After that, Natalie and I lost track. She got married in New Hampshire, and had some daughters.

I remember Natalie as slight and lilting and freckled with long curly red hair and small granny glasses that made her look like a precocious 7-year-old. I had moved to Manhattan before her in May. She wrote me a letter saying that she planned to move into a cousin's vacant East Village apartment come autumn. I suggested Natalie come a few months earlier and share my one-room apartment in Little Italy. She did.

Natalie and I were not "lovers." We were deep friends first who also shared sex  that act usually happening after a session of criticizing each other's poems. It was as if we were trying to reinvent Greenwich Village bohemia, like Warren Beatty and Diane Keaton in "Reds." One week Natalie left for a poetry workshop on Cape Cod, and afterward announced in an excited voice that she had slept with the main act at the workshop, poet Saloir Kallington (not his real name). I was envious, but not jealous. Not a bit. I too wanted the opportunity to have sex with a famous poet.

One night in July, Natalie was sitting in a chair reading and I was lying on our futon reading when the electric light in the apartment just disappeared. The light didn't abruptly vanish the way it does when you kill the lights, but rather the illumination seemed to evaporate into darkness. I ran to the back window and saw the lights of Little Italy blink off. Then in the distance the twin monoliths of the World Trade Center vanished as well.

Natalie and I put our tennis shoes on and rushed down to the street. Everyone was excited as if it was Mardi Gras or Halloween. A dude was standing in the middle of Lafayette Street directing traffic with a flashlight. Natalie and I walked west into SoHo and then headed downtown. I believe we were going to see if the Statue of Liberty was still lit. The neighborhood we were walking through is called TriBeCa today, but during that summer it was just nameless blocks of warehouses. With the city blacked out, this was the empty quarter. The end of the world. There were no cars on the street. There were no people. No one. Natalie and I were the queen and king of lower Manhattan.

We ended up at the World Trade Center. The pavilion between the towers was stark and empty. There were no people milling around. No guards or policemen. Had they successfully evacuated the towers and then just abandoned them? It was quiet, so quiet that you could actually hear the fabric of our jeans as we slid off our pants and began fucking between Tower 1 and Tower 2.

I lay on the concrete and Natalie pumped above me and I managed to have an ironic literary thought of how phallic the towers looked. For years afterward, when I remembered this moment (which I occasionally did), I quietly wondered why I was on the bottom. As bohemian as Natalie and I were, we performed enthusiastic but conventional missionary position sex. We were children of the suburbs after all. This was why it was such a hoot to be living in the dead vortex of urbanism, New York City; living in a one-room apartment in Little Italy where the bathtub stood out in the open beside the stove. Fuck going to college. Fuck worrying about a career. Fuck conventional notions of friendship and romance. Hell, maybe I would reject my suburban upbringing and welcome a chance to fuck Saloir Kallington just as Natalie had.

Twenty-four years and some months later, for no reason at all, I suddenly realized why I was on the bottom. Since that moment under the World Trade Center, I have lived an arty but inconspicuous life, and I have never again had sex in a usually public space. If I had, I would have realized the only chivalrous thing for a man to do when he's entering a woman on concrete without benefit of cushions or blankets, is to take the bottom position.

So she and I continued doing what we were doing under the World Trade Center, and laughed when we finished. We pulled our pants on and were both amazed that there was still no one around. Still no light. I don't remember whether we checked out the Statue of Liberty, but I do know that we drifted back uptown to investigate the impromptu street parties springing up throughout Greenwich Village.

It wasn't until the next day that we heard that there had been looting farther uptown and in the Bronx, that the blackout hadn't been a kick for every New Yorker.

Many years later when bin Laden took down the Trade Center, I watched it fall from my roof on East 12th Street. I felt a Hemingwayesque obligation to get as close to ground zero as possible, and by 3 that afternoon had zigzagged around the police road blocks, making it a few streets below Franklin. There was nothing to see beyond the hundreds of cops but billowing clouds of smoke. Under the volcano. At that moment I realized I had only one real memory of the World Trade Center, the one I just told. It seemed an inappropriate memory to share with anyone. That day was just too biblical.

A week later, after reading hundreds of eyewitness accounts in the newspaper of the chaos of that day, the noise, confusion, falling glass and rubble and people, especially people, falling bodies that no one could count -- did dozens jump? hundreds?  the whole terrible two hours filled with special effects more Hieronymus Bosch than Hollywood, I wondered how the World Trade Center could ever have been as deserted as it was that night with Natalie.

I went and Googled the 1977 blackout. I learned that the power blew on July 13, at 9:34 p.m., after God shot lightning upon a Con Ed electrical transmission line in Westchester County. It was a Wednesday night. Surely down at the World Trade Center there had to have been at least several thousand miscellaneous cleaners and graveyard shift workers still toiling. It was only 9:34 p.m., after all. A work night. How on earth did they vacate the twin towers down the stairways in the dark and then disappear off the streets of Lower Manhattan in the short hour that it took Natalie and me to walk from Little Italy? I tried to Google an answer, but failed.

Then several weeks later, I received an e-mail from Natalie. She referred to our blackout. I was reminded that night had been real, not a teenage hallucination. Natalie referred to that night discreetly and in a way that was central to her own life since then: "My kids don't know the half of me," she wrote. "They might have a vague idea that I once wrote poetry, but they've never read any of it. They have no idea that I once tried to sensualize everything I could get my hands on, that I meant to be famous, that I did my best to shock. They have no inkling that I used drugs or had sex under the World Trade Towers during the blackout of '77. If I died now, would they say I had a suburban soul?"

I saved the e-mail and mused that during the autumn of 1970, in Japan, there must have been former lovers living in, say, Osaka and Yokohama remembering a tryst they had 25 years before in Nagasaki. Or Hiroshima mon Amour. Half a century later, as many hours that we log watching CNN, I don't believe there is anything that can prepare you for reconciling a private and personal moment with an apocalypse of history. At least Natalie remembered. And that moment had been real.