Does online love come only in shades of red and blue? 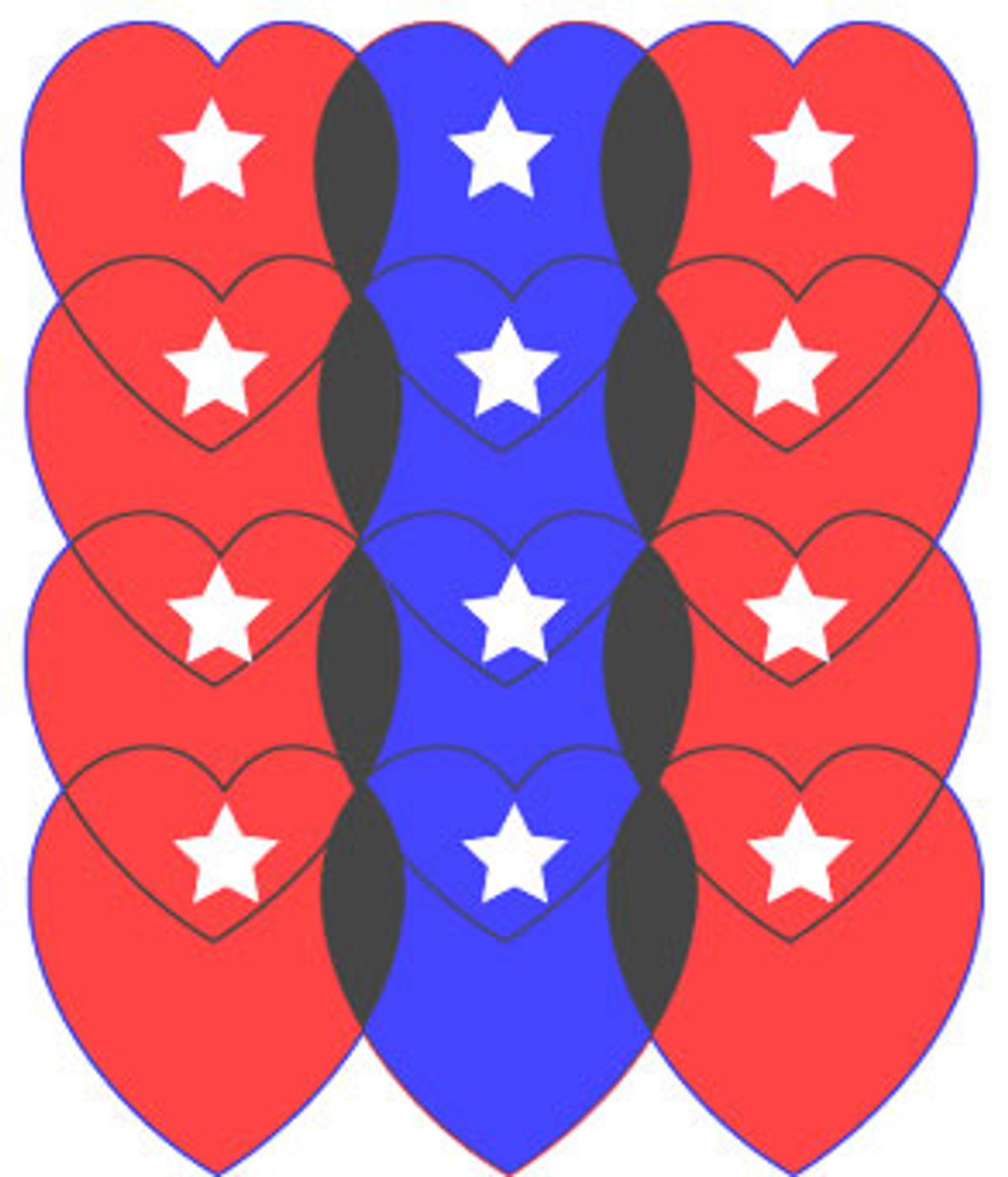 For Chris, a striking blue-eyed graduate student from San Francisco, the right politics, that is, her kind of politics, is a key qualifier for a potential date.

"They don't have to be exactly the same, but politics are an important part of my life and I want to be able to talk to people who I am very close to about them," says Chris, 35. She describes herself as playful and progressive and lists "changing the world" as one of the five items she couldn't live without on her profile on Act for Love, a "cause oriented" and politically progressive dating site.

Chris has tried it both ways. But dates set up online with guys who had very different politics made her realize that she wasn't likely to connect with a person unless he shared her political direction. Match.com and Yahoo.com gave her plenty of options, but the people she found there didn't have nearly enough in common with her. Still searching, she finds herself wishing Act for Love were better known and had more members so she'd have more similarly politically minded options for her next date.

Politically specific dating sites are on the rise. That politics has been co-opted as yet another targeted market for dating sites shouldn't come as a big surprise to anyone, given both the rapid proliferation of dating sites and the hype of the presidential election. Act for Love's co-leader, John Hlinko, says business in the past several months has taken off. Jupitermedia reports that at least 29 million Americans used online dating services last year, and there are as yet no signs of a slowdown, with revenue growth of $250 million forecast over the next four years. Many site owners expect the election year will increase the traffic on their sites.

The growing popularity of political dating sites raises some provocative questions. The United States has already been sectioned into red and blue states, and the dialogue between people who share differing political views seems to some observers to be at an all-time low. Dating sites are supposed to bring people together. But doesn't ruling out possible dates on the basis of their politics simply contribute even more to the walls dividing people from each other?

Some experts on dating are unworried. Author and online dating consultant Evan Marc Katz sees the recent explosion of political dating as just the latest niche in the Internet dating phenomenon. He agrees that the sites play a hand in at least slightly polarizing the political landscape, but he still thinks narrowing one's dating field by joining dating sites that correspond to a brand of politics makes perfect sense.

"When people have fundamental beliefs or core values, why would you go out with someone who doesn't have the same?" says Katz, the author of "I Can't Believe I'm Buying This Book: A Commonsense Guide to Successful Internet Dating" and founder of the dating consultant firm E-Cyrano. "James Carville and Mary Matalin are the exception and not the rule."

Katz says that people already self-segregate, and the people capitalizing on this idea are just making it easier for people to find like-minded mates.

"For people who are really serious Democrats or Republicans, or liberal or conservative, it makes perfect, rational sense to go to a site where everyone is starting with that same base. There's a site for everything. They're not equal in size, but for people who have a common interest, whether that be politics or religion or sexual fetish, it makes sense to start there. And then they can build on that."

Bev Bacon, the author of "Meet Me ... Don't Delete Me!" says that the easiest and most logical way to find like-minded people is not by wandering grocery store aisles, but by using dating sites. But she cautions that the sheer volume of dating sites offering matchmaking perfection is fostering a picky dating culture, where the "I am looking for perfection and nothing less" ideal may keep people from ever finding a good match.

"Just because you're a die-hard Democrat, it doesn't mean you'll find your perfect mate on that site," Bacon says. "You've got to weigh out what it means with all the other qualities you want."

Amee Bohrer, an avowed Democrat from Joliet, Ill., says that using Act for Love automatically narrowed her dating field in a good way and that finding a political match is a priority for her.

"Choosing a political site eliminates the ignorant and illiterate drooling masses who just troll the Internet for one-night stands or don't have the confidence to meet people offline."

Hlinko, who launched Act for Love a little over a year ago, is banking on the hope that the increasing numbers of people are concerned enough about finding a political match to use his site, which caters to progressive voters with the catchphrase "Take action while getting action."

"I definitely couldn't put down a list of issues everyone agrees with, and we don't want people who are just knee-jerk liberals," says Hlinko, who worked for MoveOn and founded the Draft Wesley Clark for President site that spurred the general to enter the presidential primary and later won Hlinko a job as Clark's Internet strategist.

"Certainly people here are on more of a progressive spectrum, but people want political debate. And opposites attract. A good impassioned debate is just a couple steps from passion."

Brian R. Barcaro looked at the success of conservative talk radio and news and the growing conservative market as an opening for ConservativeMatch. Barcaro doesn't subscribe to the idea that dating sites polarize people. He says people come to political dating sites with preformed, underlying values.

He also believes that the politics of people using political dating sites are shaped by those underlying values, whether religious or societal.

It follows, Barcaro says, "that the values people are looking for at an online dating site tend to correspond to a Democrat or a Republican person."

The site launched in May of this year, but Barcaro, who also runs CatholicMatch, says he expects the business to grow long past the election.

Tom Swanson went looking for a date online but couldn't find a conservative match at the big dating sites, which sparked his interest in founding SingleRepublican.com seven months ago. Swanson knew he was getting into what he calls a "narrow niche market," but he's proved that there is an interest in his site, to the tune of 30 new sign-ups per day.

"I think people join mainstream sites and get overwhelmed by sheer numbers and impersonal atmosphere on those sites, the giant meat market," says Swanson, who, incidentally, is dating a woman he found offline. "It helps in a way to be a smaller site, but you don't want to be too small. Being something that is obviously a polarizing type of site, you either hate it or you like it."

Attempting to buck the trend toward partisan dating, Love in War founder Bryan Carlin aims for a politically diverse crowd of singles. The site encourages nonpartisan political sparring and welcomes people who "know how to relax and not bother everyone else by screaming in their faces."

"I really loathe, and it makes me ill, the acrimony of it all and the press, the bloggers, all this hatefulness on both sides," said Carlin, who calls himself a devoted political junkie. "I'm not expecting some right-wing, left-wing love-in over the site. But it would be cool if people talked and had a clear debate. I'm all for that and that would be great. But I don't know if that really happens."

Ana from Los Angeles, who has perused eHarmony, Nerve and Love in War, says she has met the most interesting men at Love in War.

"Politics is important to me, and I want to meet a man who values that part of society as well," says Ana, 46. "The Web site has a very cleverly aimed profile that allows me to make an assessment about the attitudes and interests of every guy that fits my more basic criteria ... age and distance."

The regular weeding-out of made-for-the-moment dot-com businesses will probably include a few of the political dating sites once the fever pitch of election season passes, and the issues that roil people today are going to be around tomorrow, providing endless grist as the search for the right match continues online. Political polarization may in the end be a necessary evil that comes with the chance for a match made in heaven.

As Hlinko puts it: "There's a whole range of issues that are not going to go away soon. People vote every four years, but if all goes well they're having sex more often than that."

Jeff Nachtigal is an editorial fellow at Salon.