Let's save literature from the literati

Despite more gloom and doom on the Op-Ed pages, books have not been killed off by the "visual culture." 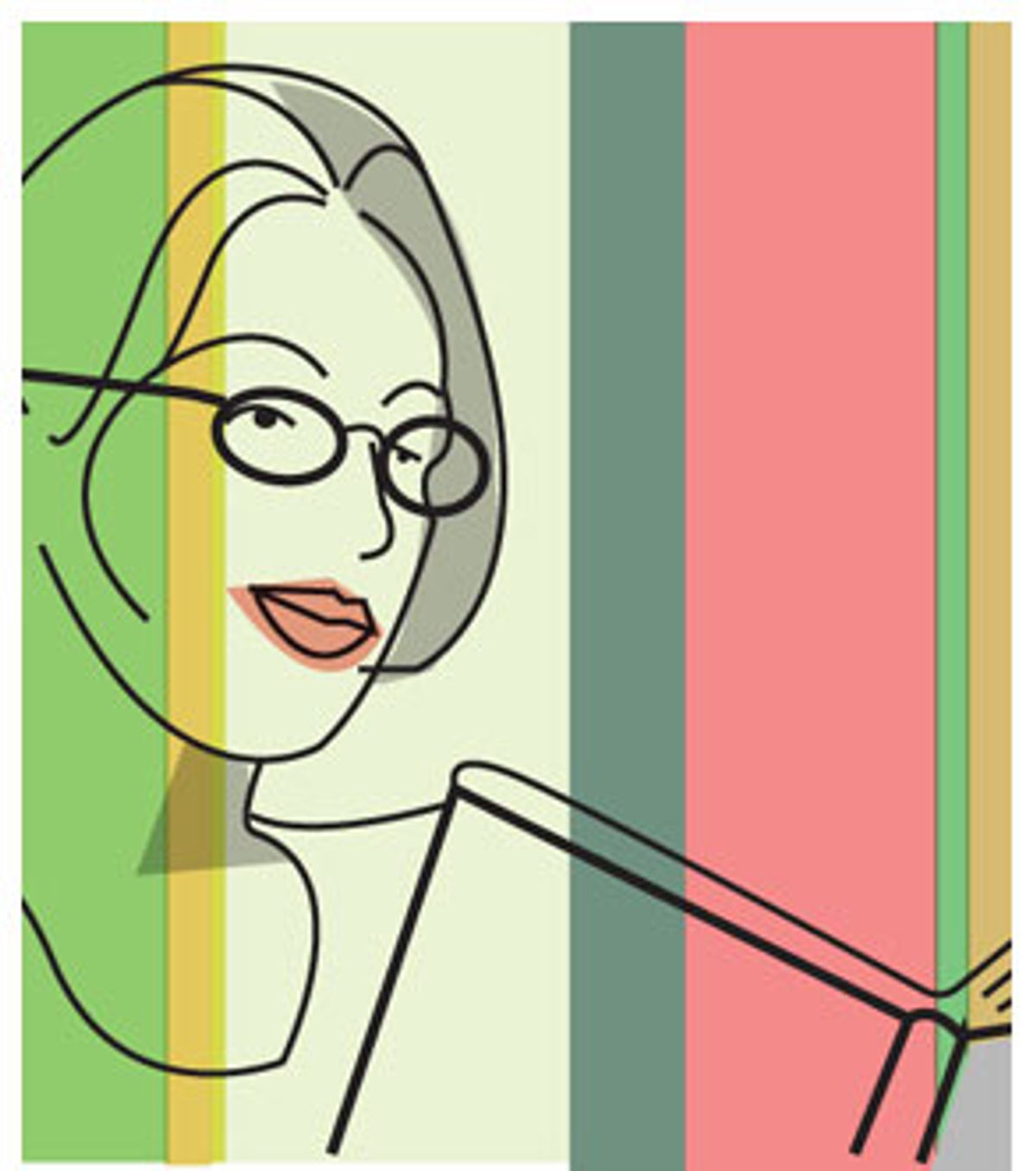 Isn't it about time the literati stopped blaming their troubles on them newfangled movin' pitchers? OK, so Andrew Solomon's opinion piece in last Saturday's New York Times, "The Closing of the American Book," is targeted at television and the Internet. It amounts to the same thing. In her book "Terrible Honesty" Ann Douglas wrote about how the advent of movies fostered the mistaken assumption that society was about to become divided between literacy and illiteracy. The real contrast, Douglas writes, is between different models of literacy.

Solomon, the author of a much-praised study of depression, "The Noonday Demon," is writing in response to a recent poll that showed reading for pleasure is down among Americans of every race, age, gender and economic class. He's concerned and depressed about that, and he should be. It is depressing, as Solomon notes, that we have one of the most literate societies in history but a decreasing number of readers.

What's wrong with his piece, and with almost every other literary attack on visual culture, is the inability to understand that there is such a thing as visual literacy, and the assumption that reading is a mentally active experience and looking a passive one.

The surface absurdity of that opposition is easy to expose. Anyone who thinks that reading cannot be passive should attempt any paragraph written by James Fenimore Cooper. Anyone who thinks looking cannot be active should, to paraphrase a line from "The Dick Van Dyke Show," try sleeping through "The Guns of Navarone." Those are smartass examples, but the point is that our level of engagement depends on both the quality of what we are reading or watching and what we choose to bring to it. You no more plop down in front of Jean-Luc Godard's "La Chinoise" than you just pick up "Ulysses." Reading can be the cheapest pulp as easily as the greatest literature, and the latter can be a washout if we choose to be lazy when we're reading it. Looking can be "The Rules of the Game" or "The Ghost and Mr. Chicken." It doesn't even have to divide along a high-low split (usually a false division anyway). Someone who lazily watches the "good television" that even Solomon acknowledges is going to be baffled by a lot of pop culture. Try to follow the labyrinthine plot of "Alias" or "Buffy the Vampire Slayer" without paying attention.

Solomon is right that an infobyte culture leads to an infobyte attention span. And since journalism of one sort of another is the reading most Americans are exposed to, it has to take some blame for degrading reading. (If the news can be done so scantily and tidily, what chance does literature stand?) Solomon is also not wrong when he suggests that electronic media can have a soporific effect. (An hour spent reading or browsing online leaves me logy in a way that several hours of reading magazines or a book does not.)

But Solomon contradicts himself when it comes to the visual. He notes that "people who read for pleasure are many times more likely than those who don't to visit museums," but laments that "the electronic media, on the other hand, tend to be torpid." Let me get this straight -- some looking is just fine, provided it's done in a museum, but the visual media encourage passivity. What, would Solomon contend, is the difference then between someone looking at a Picasso reproduced in an art monograph or called up online?

And isn't reading a visual experience? The eye has to recognize the patterns formed by visual hieroglyphs in order to make sense of them. As Douglas points out, words "exist nowhere save in our minds and in books." What visual culture shows us, she contends, are concrete things that exist in the world and can be recognized without words. So which, based on those descriptions, denotes a more insular experience? "The retreat from civic to virtual life is a retreat from engaged democracy," Solomon writes. Tell it to the folks at MoveOn, or the ones at Free Republic, for that matter.

Of course Solomon is right when he says that reading is itself an experience that enriches other experiences. But any reader who's honest will also admit that part of the pleasure that reading provides is being able to do it by your own damn self. Sometimes -- and it doesn't much matter whether I'm reading Jackie Susann or Shirley Hazzard -- reading is a way for me to get away from everyone and everything. It may be that, in the process, I come across something that enriches my understanding of the world. But I know that of all the times I have been deepest into my "Don't bother me" mode, a majority have been while I was reading. To counter what Solomon acknowledges is a solitary experience, he proposes that "we must weave reading back into the very fabric of the culture, and make it a mainstay of community."

Fine, but how? And what good will it do if we succeed? Reading, for Solomon, is always, without exception, a good thing. To hear him tell it, no one ever picks up a trashy book to kill time, no one ever gets around to that classic he always meant to read and finds that it bores him silly. Reading will always leave us better informed and better citizens, Solomon would like to think. But the very nature of a democratic society doesn't offer any guarantees. "Without books," Solomon writes, "we cannot succeed in our current struggle against absolutism and terrorism." Where does he think the terrorists got their absolutist ideas from? And what lessons against absolutism will someone who turns to the works of Ann Coulter or Michael Moore learn?

For something that we're always told is necessary and pleasurable, reading always seems to attract the most hapless proponents. I don't know that I've ever read or heard from one person who took it as a mission to publicly proclaim the joys of reading and didn't manage to make it sound like the type of virtuous drudgery you'd do anything to avoid. (The ones who have to sell reading face to face and person to person can't resort to lofty rhetoric. Which is why good children's librarians have produced more readers than any peroration that has ever drooped out of Harold Bloom.) People stay away from books for a lot of general reasons and one in particular that champions of reading don't want to confront: because they have been made to feel that books are not for the likes of them.

Like a lot of other well-meaning folks Solomon simply does not understand that to many people, books represent an inaccessible world of high culture. I spent 10 years working in a bookstore in the middle of Harvard Square. Time and again, I saw people coming in to buy a book they had heard about or wanted as a present for a grandchild or a niece or nephew, and tentatively asking for help as if they had no business being in such a place -- as if they were going to be laughed at if they asked the wrong thing (in Harvard Square, they stood a good chance). More people have probably been turned off of Shakespeare because of somebody babbling about the great poetry of the Bard than because they saw a bad production of one of his plays.

That's the kind of blinkered enthusiasm Solomon engages in when he invokes Epicurus and Walter Pater to sing the joys of reading. "For art comes to you professing frankly to give nothing but the highest quality to your moments as they pass," Solomon quotes Pater as saying and adds, "Surely this is something all Americans would want." In whose fantasy? Does Solomon even realize how exhausting a life of "nothing but the highest" moments sounds? In Shirley Hazzard's novel "The Evening of the Holiday," an elderly artist is asked by his wife if he is going to let a smart-aleck remark pass. "Let it pass?" he asks. "Let what pass? All my life people have been trying to whip me into indignation ... when all I want is to let it pass ... To let everything pass."

That's closer to what most people want than the perpetually heightened life of perception Solomon advocates. He thinks reading has the potential to make people more engaged, more attuned to nuance and ambiguity. He's right. Solomon wants people to be encouraged to read, and they should be. But it's not going to happen as long as the champions of literature keep telling people the culture they enjoy is nothing but junk, and as long as they keep extolling the highest achievements of language but don't share a language with their countrymen.