"The Door in the Floor" 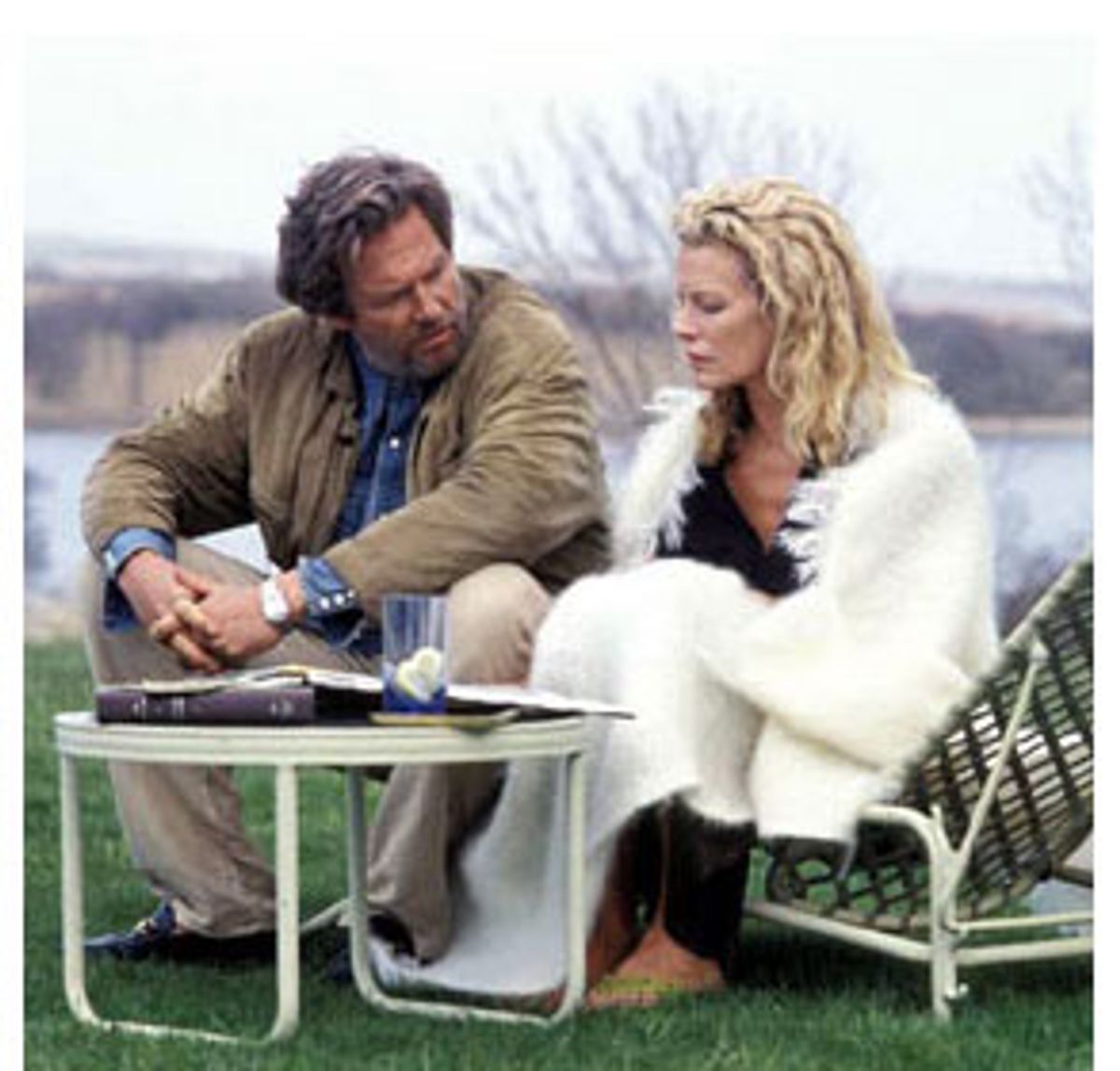 "The Door in the Floor" is a Restoration Hardware catalog selling grief and sex drenched in grief. It's full of wicker and Adirondack chairs and reproductions of "classic" table lamps. The preferred fiber is rumpled linen, and the favored colors are all earth tones. Decorating schemes tend toward the spare and airy: whitewashed walls, polished wood-plank floors, and clustered arrangements of framed and matted black-and-white family photos (no disposable Kodaks for this crowd). For the outside of dwellings, an artfully achieved weather-beaten look is all the rage. The movie appears to be made for an audience whose highest aspiration is to be WASPs -- and it feels long enough to produce enough generations of them to fill an Andover reunion.

The director, Tod Williams, has adapted the film from John Irving's novel "A Widow for One Year" (which I have not read), and it's nearly impossible to tell whether Williams thought he was making a family tragedy or a sex farce. Some of it seems meant to be funny, but the tone is so damned dry and tasteful that it doesn't exactly set the mood for laughter. When you've watched not one but two scenes of the young hero discovered masturbating, preceded by wafts of somber piano music (the culprit is Brazilian pianist and composer Marcelo Zarvos) to accompany his manual ministrations, you feel as if you should be able to laugh -- though not necessarily at what the director intends.

Set in the Hamptons, the movie is about Ted Cole (Jeff Bridges), a successful children's book illustrator and author whose marriage has been in trouble ever since the car accident that killed his two sons. His wife, Marion (Kim Basinger), scarcely has the resources to deal with their 4-year-old consolation-prize daughter, Ruth (Elle Fanning). Ted gets a call from his dead sons' prep-school teacher (Exeter, doncha know?) asking if Ted might take his teenage son, Eddie (Jon Foster), under his wing for the summer. Eddie wants to be a writer, and he idolizes Ted. By the time Eddie turns up, Ted has moved out of the house, and Marion, touched by the crush the boy has on her, begins sleeping with him.

Jon Foster is stuck in a real bummer of a role. He's not only the young man taught the mysteries of sex by a mature and understanding woman, he also has to be the young man who finds that his idol is fallible. (You half expect Marion to tell Eddie, "When you talk about this, and you will, be sure to tell everyone what a shit he was.") He does about as good as any young actor could. Foster has been very smartly outfitted in the awful preppy clothes that are supposed to make young men look grown-up and only emphasize what gawky kids they are. The manner in which he responds to Basinger and particularly Bridges, utterly unable to answer a question any way but earnestly, without the resources to parry the ironies and jabs they send his way, is completely convincing.

For Marion, Eddie is clearly a substitute who combines the lost affections of her dead sons and the lost attentions of her estranged husband. (He's having his own affair with a woman in town played by Mimi Rogers, who's cruelly used by Williams to seem a sex-starved, vindictive shrew.) As the movie presents it, that notion is neither touching nor erotic nor creepy. It's not much of anything beyond a wan retread of the now forgotten coming-of-age-with-an-older-woman fantasy "Summer of '42." (Basinger's beach outfits, charming '40s-style two-piece swimsuits that she wears fetchingly, reinforce the comparison.) There are a few tasteful glimpses of Eddie and Marion making love, artfully -- which is to say falsely -- arranged so that nothing of Basinger or young Foster can be seen. It's not that discretion that makes the film seem so reticent, though. I kept trying to figure out what it is here that the advance reviews are hailing as frank, and the only thing I could figure out is that, in the context of such a piece of repressed WASP-dom, the little we get does seem frank.

Williams is not, to put it kindly, a sensualist. His visual presentation of sex is both cold and crass -- especially toward the women. When Bijou Phillips first appears as the town girl baby-sitting for Ruth, she's framed so that the camera focuses on the snug butt of her shorts or her nipples poking through her T-shirt; only occasionally do we see her face. When Mimi Rogers is shown posing nude for Bridges, she's shot almost as disparagingly as Bridges portrays her in his drawings -- Williams has no feel for a body that does not belong to a younger woman. (In the brief role of a frame-shop manager, Donna Murphy comes off best.) How is Basinger? She's touching, which is about all she's been expected to be since "L.A. Confidential," but that doesn't add up to a character. It's easy to figure out what drives Marion and Ted apart -- he's a self-absorbed, philandering, sozzled heel. What you can't tell is what brought them together in the first place. They don't even have the connection you can discern in tragic mismatches.

You can't believe that Ted is a successful children's author. The illustrations we see (inky drawings with bloblike figures, done by Bridges) would not appeal to a child's eye, and the stories we hear are vaguely menacing and narratively indistinct. One of the stories from Irving's novel has recently been published by the writer as his first children's book. Ted's work seems like a literary writer's idea of a child's story -- it doesn't have the essentialism that marks the best writing for kids.

There's always a risk of taking for granted an actor who is so consistently believable and versatile and unshowy as Jeff Bridges. His performance in this picture has been especially praised, and he's very good here. Bridges has no vanity; he doesn't hesitate to make Ted a snake. Bridges is minus that crippling actor's trait of wanting to be liked, even at the expense of fidelity to his character. And he gets to play on his slyness in a few scenes, especially in the last half of the movie. Proposing to a mother and daughter that they pose for him, Bridges rivals Tobey Maguire as the summer's chief web spinner.

But good as he is, it's not an enjoyable performance -- Ted is such a bastard that we don't feel anything for him. Walking around his property naked or in flowing linen nightshirts, he suggests a more human-size version of the drunken writer Sterling Hayden played in "The Long Goodbye." But does Williams want to satirize Ted, or does he want us to empathize with him? It doesn't seem to have occurred to him that he could do both, and he isn't skillful enough to pull it off.

Had the movie been shaped differently we might have been able to enjoy Bridges' goatishness. At one point Ted tells Eddie that he arranged to "give" the boy to Marion. Perverse as that is, it suggests a more promising approach -- a narcissist writer who arranges a boy toy for his mopey wife so he can carry on his own dalliances -- than the "Cheeveresque/Updikesque/Insert your own patrician tragedian here" story delivers. But still, you can imagine "The Door in the Floor" causing some good cheer. Woody Allen celebrates his 70th birthday next year -- and it's been a while since "Interiors" and "Another Woman" and "Crimes and Misdemeanors." He must be relieved that someone else can take over as the standard bearer for tortured WASPs.