Our intrepid reporter test-naps a new sci-fi sleep pod. But at $14 for 20 minutes, shouldn't it come equipped with an Orgasmatron or something? 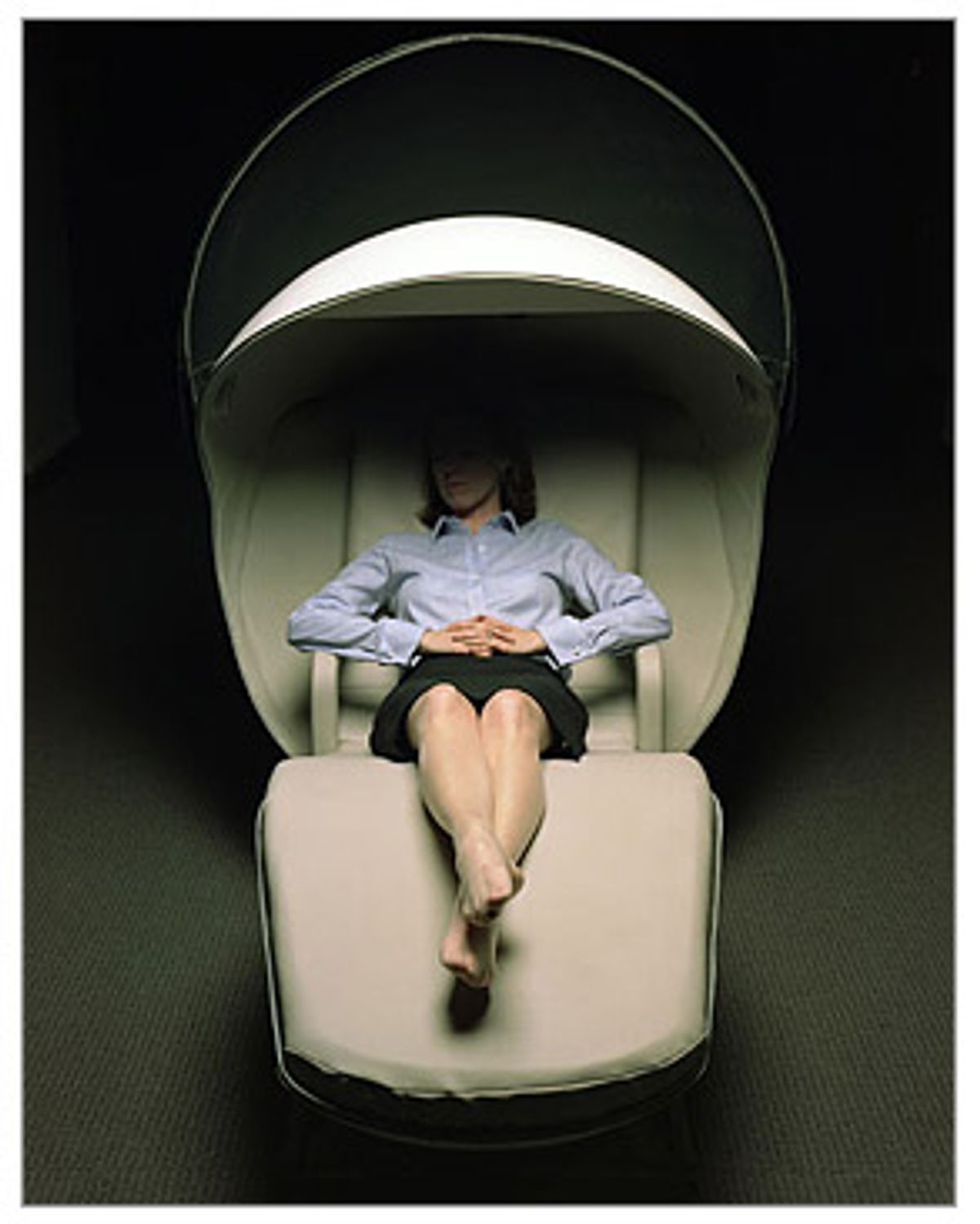 It was 2 o'clock in the middle of the workday, and I was snoozing. Or rather, I was reclining in a space-age pod on the 24th floor of the Empire State Building, fretting over the fact that I was awake.

For the past few weeks, napping pods have been all over television and newspapers in New York. MetroNaps, the company that created them, opened this first location in May, and it didn't take long for the futuristic capsules to catch the media's eye. According to the MetroNaps Web site, which bears the alarmingly Orwellian catchphrase "Welcome to the future of workforce productivity," MetroNaps "was born from the realization that many employees spend significant amounts of their day dozing at their desk or catching powernaps in odd places." With its methods and its contraptions researched at Carnegie Mellon University, MetroNaps aims to rectify the scourge of office lethargy by becoming "the premier provider of professional nap centers in the United States," offering overtaxed drones 20-minute naps for 14 bucks a pop.

Now, I have had co-workers who napped in "odd places." The last publication I worked for was quartered in a decrepit New York townhouse; the carpet practically hopped with mites, and unidentifiable secretions occasionally oozed from the walls. The building's little infestations made safe sleeping zones hard to come by, but my colleagues persevered: They napped on a crusty couch in the boss's office, the untended and dusty top landing of a staircase, under their own rusty desks. But I can say with confidence that not one of those revolting locations was as "odd" as the MetroNaps facility.

After seven years in New York, I had never been to the Empire State Building. I entered with my eyes skyward, gawping at the familiar spire and intricate window-work on the outside, and then at the marble of the inside lobby. I took the elevator to the 24th floor, snuffling up the comfortable steam-and-lead-paint smell of prewar Manhattan buildings, and ambled past old-fashioned glass office doors until -- just adjacent to Schall & Ashenfarb, certified public accountants -- I found MetroNaps. It was then that I left the dank familiarity of the 20th century and entered a Robert Heinlein novel. As soon as I was through the door, the light and ordinary sounds of the hallway disappeared; MetroNaps is kept dark and filled with a very loud whooshing sound. At a reception desk facing the door, a wildly friendly man, MetroNaps co-founder Christopher Lindholst, whispered, "Welcome to MetroNaps!" He gestured past the Ikea-style shelves that separated the check-in area from the much larger napping pen. That's when I saw them: eight egg-shaped pods, white and subtly illuminated, so that they seemed to glow in the dark room.

There isn't space to list all the Sci-Fi Channel analogies that began to crowd my head, but I know that Barbarella's Orgasmatron was edging out the black-oil alien-virus labs from "The X-Files" when Lindholst led me to one of the pods and tucked me in. It was really just an airplane seat-cum-La-Z-Boy, covered with some sort of slate-blue plastic stuff that was so soft and chilly to the touch that I actually checked to see if it was emanating cool air. It wasn't, but it still felt surreally light. The top half of the chair was covered by the naturally lit fiberglass dome -- imagine one of those beauty-parlor hair dryers enlarged 30 times. A lever controlled the degree to which the chair reclined, and a headphone sat on one of the contraption's arms, waiting to pump ambient music through my sleeping brain. A soft synthetic blanket covered me. All I had to do when I was ready to begin my 20-minute timed nap, Lindholst instructed, was hit a light switch.

Before I let the clock begin its tick, I sat up and tried to angle myself out of the pod, craning my neck to see if anyone else was dozing around me. I could not tell, no matter how hard I looked, whether the other pods were occupied. The whooshing sound, which I realized was identical to the engine and wind background noise on a plane, was so loud that I didn't think I could hear a snore or yawn, let alone a rustle of blanket from my neighboring pods. Several people who'd heard I'd be MetroNapping had asked me the same question: Can you have sex in the pods? Yes, I concluded, provided that you kept the moaning down and cut some sort of deal with the pod monitor.

OK, I had stalled enough. It was time to nap. I put my headphones on and flipped the switch. The light went off. I stared ahead, thinking that the ambient music really sounded like a light-saber battle: a lot of electronic swishing and keyboard psychedelia. I reached up and touched the top of the pod; its texture -- like a hardened Plasticine oil painting -- recalled the multistoried fiberglass treehouse from the Philadelphia Zoo of my childhood. They used to give you these cool plastic rings when you went in that you could use when you saw a certain light and the rings would make a diorama about termites or poisonous tree frogs light up. It's been years since I went to the zoo. I wonder if they let adults climb the treehouse ...

I realized with a jolt that I might have already blown five of my 20 minutes of allotted naptime and I wasn't asleep yet. I had been afraid that I'd be struck by performance anxiety. I tried to shut my brain down. OK, sleep now, I thought, staring ahead. OK, now. I squinched my eyes shut.

I have never been a good napper. But I am a very good sleeper. I've never struggled with insomnia; I can fall asleep with the lights on, with the television on, while someone is talking to me, while someone is making out with me. You create the distracting condition; I'll sleep through it. If I had my way I'd get nine hours every night, but since I rarely get home before midnight, that's difficult. If I get under six hours I become bitchier than usual and cry hourly. But generally, I don't nap. First of all, I never bought the quality-over-quantity philosophy when it comes to matters of sleep, food and sex. If it's really that great, then I want a lot of it. A "good nap" is an oxymoron. If it were really good, I'd better be allowed to enjoy it straight through till morning.

So here I was in a large plexiglass egg, questioning my decision not to order food before my nap. When you check into MetroNaps they ask if you'd like to choose from a menu of 16 sushi and deli items; the stuff gets delivered and is waiting for you when you awake. Lindholst had explained that it helps workers get in a quick snooze on their lunch hour without sacrificing good nutrition. But by phone the day before, he'd advised me to eat before I came for my 2 p.m. appointment so that I'd be groggy. I had dutifully consumed a malai kebab and a poori, but was thinking that maybe my body would have been more cooperative if it was getting rewarded with a nice chicken salad on the other end.

I was still conscious, and now I didn't even have a guess about how much time had elapsed.

By phone the next day, Marcia Stein, senior director of public relations for the National Sleep Foundation, didn't find it hard to believe that I had trouble. "Well of course you didn't fall asleep immediately," she said. "You were doing it for a purpose, not because you needed a nap." Stein matter-of-factly pooh-poohed the notion of necessary midday naps, maintaining that "the bottom line is if you get sufficient sleep at night you don't need to take a nap during the day." Most sleep experts recommend between seven and nine hours of uninterrupted sleep a night for most adults. "If people are sleepy during the day and require a nap, it could be a symptom of a sleep problem," Stein said.

Gary Zammit, director of the Sleep Disorders Institute at St. Luke's Roosevelt Hospital, told me that as far as our scientific understanding of sleep goes, "If getting to the point where we understand everything about what sleep does was like an expedition around the world, we'd basically have gotten as far as the end of our own block; we simply don't understand enough about it yet." That said, Zammit agreed that since what is known is that "sleep serves some essential function for us as mammals, and there's no vitamin, no herb, no exercise, nothing that can offset lost sleep, offering people an opportunity to nap if they haven't had enough sleep is really a solution." He said there is no evidence that 20 minutes is an ideal duration for a nap, but confirmed that anything longer than an hour would send snoozers into deep sleep and leave them groggy. Though he warned that no one should use naps as a replacement for a good night's sleep, he remarked that there are situations in which napping has been institutionalized as part of the workday, pointing to shift workers and students as examples.

Making napping an institutionalized part of the workday is exactly what Lindholst, a former health economist, and his partner, businessman Arshad Chowdhury, hope to do with MetroNaps. Chowdhury developed the system and the pods, while getting his MBA at Carnegie Mellon, in response to studies cited in the MetroNaps press materials about the improved health benefits of power naps. The 20-minute time period, they claim, is ideal for refreshing the body, and it doesn't hurt their business model that taking a MetroNap, eating your pre-ordered lunch, and slathering on some complimentary lotion at the MetroNaps Wake Station can all be accomplished in about a half-hour. In addition to opening new locations in Chicago and Los Angeles, the founders hope that some new-agey bosses out there will cough up the $7,950 bucks to install their own MetroNap pod in their offices, more if they want the sound system or a "privacy visor."

To my mind, there's no question that if a MetroNap pod appeared in any office in this country, it would be less than 72 hours before someone decided to have sex in it. And I predict that it would take just as long before someone was forced to declare a moratorium on people walking around the office saying, "I'm afraid, Dave. Dave, my mind is going. I can feel it ..." And even though I'm not a napper, I could see how having a pod around could be good for restoring self-esteem. I imagined a draggy, self-loathing day. I could climb into the pod and use the 20 minutes to reenvision myself as Ripley from "Alien." I emerge buff and braless in a wife beater T-shirt. "Get away from her, you bitch!" I yell, sounding just like Sigourney Weaver as I face down my editor, now a 12-foot cockroach who is threatening the well-being of my home planet by bugging me about a deadline.

Suddenly, a warm light filled my pod and my reclining chair shook slightly. I was warm and comfy under my blanket, and though I was not Ripley, I think I did get a few minutes of sleep.