23-year-old Deb Gardner was brutally murdered in Tonga in 1976 by a fellow American volunteer who to this day walks free -- thanks to a disgraceful coverup by the Corps and the U.S. 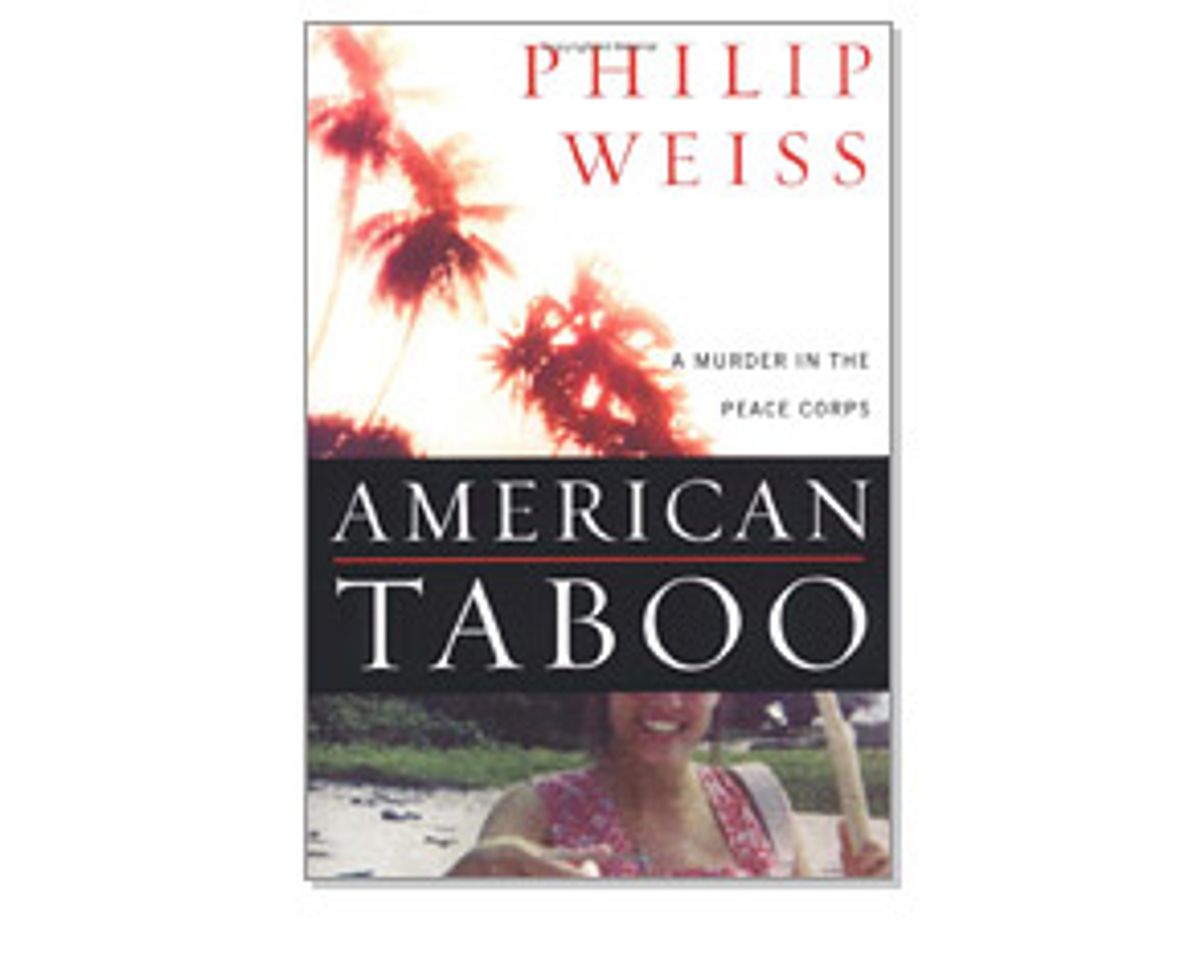 Whenever America -- its citizens, its representatives, its officials -- paves over an injustice with seemingly impenetrable silence, it matters and it matters a lot, because sooner or later what's beneath that silence, in its rise back toward the light, will shake the earth, and by that I mean our humanity itself will be shaken by the disgrace and indignation that good people will feel when the truth is finally known.

On Oct. 14, 1976, a beautiful, vivacious, altruistic 23-year-old Peace Corps volunteer from the state of Washington, Deborah Gardner, died in the island nation of Tonga in the South Pacific, the 11th Peace Corps fatality of that year. What distinguished her death from the other 10, and from every other Peace Corps death before or since, is the fact that Deb Gardner was murdered, savagely hacked to death, by a fellow volunteer, Dennis Priven, then a 24-year-old science teacher from Brooklyn, N.Y.

With his Seahorse diving knife, Priven stabbed Deb Gardner 22 times, and -- here's the point, here's why we're obliged to talk about this 28 years later -- this coldblooded killer walked away from the crime scot-free, aided and abetted by the Peace Corps and the U.S. government and their subsequent coverup of the atrocity. In the aftermath of her slaying, Gardner was treated like garbage, not by the traumatized Tongans but by her own heartless and chillingly naive countrymen, as though her life had no value and her death no meaning.

Since 1977, Priven has lived in Sheepshead Bay, N.Y., in the Brooklyn neighborhood where he grew up, without censure or scorn or any limitation placed on his liberty. When it was clear to Priven that Philip Weiss' "American Taboo" would be published this year, he changed his phone number and took early retirement from his job at the Social Security Administration. The only real punishment he has endured for his crime is abstract, existential: to live his days as a lonely sociopath, presumably haunted by his brutal act and pitied by his deluded friends. Gee, poor monster.

If justice had been served, if the Peace Corps itself and even some of its volunteers, despicable champions of Priven, had not skewed that process with lies, evasions, threats, indefensible silence, ugly distortions of the victim's character, misrepresentations and outright cowardice, Priven would have been executed in Tonga long ago, and good riddance.

The subject, I must admit, is highly personal. I never knew Deb Gardner, but I've known about her for almost three decades, and we have at least one thing in common: We both experienced the dark side of the Peace Corps. As Peace Corps volunteers in 1976, we were, at opposite ends of the world, both victims of knife attacks in our own homes. She died, I obviously survived. She was assaulted by a colleague, a brooding, introverted but, by all accounts, brilliant young man who obsessed about being her lover. I was assaulted by a stranger during a break-in, who was sentenced to seven years of hard labor.

Every government agency is sensitive to public image but none so much as the vaunted yet often-controversial Peace Corps, where the balance between damage and damage control has frequently been a high-wire act determining its very existence. In October 1976, as I sat in Peace Corps headquarters in Washington making arrangements to return to my host country in the Eastern Caribbean to testify at the trial of my assailant, that administrative challenge was formidable. The building whispered with news of a homicide in the South Pacific, something about a ménage à trois gone bad. My region, the West Indies, was focused on more run-of-the-mill turmoil: the evacuation of volunteers from mayhem in Jamaica, the psychological counseling of one of my fellow volunteers from the islands who had been gang-raped and beaten by local thugs. That summer, one of my closest Peace Corps friends on St. Kitts had died in a freak accident, and my roommate, a scruffy biker from California, conned me out of the few hundred dollars in my bank account and vanished back to the States.

I was never ambivalent about my service in the Peace Corps or my support for the goals of the organization. These misfortunes and hundreds more throughout its history do not indict the Peace Corps mission or cast in doubt its efficacy. The problem (which comes and goes), precisely characterized and illuminated by Philip Weiss, has been the tacit understanding within the organization that its myriad and mostly predictable troubles are taboo, not subject to public or even congressional scrutiny, and my own experience can do nothing but confirm Weiss' conclusion.

As a writer and former volunteer, I wasn't inclined to overlook the skeletons in the Peace Corps closet, and in 1983 I pitched the story of Peace Corps casualties (victims of violence, psychological burnouts, suicides, political scapegoats) to Playboy magazine and was given the assignment. What happened next has everything to do with the dynamics Weiss so painstakingly investigates in "American Taboo." I flew to Connecticut to meet with the family of Philip Cyr, a volunteer murdered in Nepal by bandits, but my interview with the grieving parents was interrupted, incredibly, by a phone call from the then-director of the Peace Corps, Loret Miller Ruppe, who advised the Cyrs not to talk. A short time later, Peace Corps headquarters issued a worldwide memo to its staff threatening disciplinary action against anyone who spoke with me. My sources (and friends) within the organization stopped taking my calls. My Freedom of Information Act request for documents was kicked back at me with a price tag of more than a million dollars.

Despite Peace Corps stonewalling and crude obstruction, I completed the article but, beginning with Playboy, every major general-interest magazine in the country turned it down, a phenomenon later explained to me by C. Michael Curtis, a senior editor at the Atlantic Monthly, who had read the piece. The Peace Corps, Curtis said, was a sacred cow, and no editor wanted to be responsible for undermining its exalted image.

But my intention, and Weiss certainly seems to share it, was never to take down or disparage the Peace Corps, but to air out structural flaws, with the hope that future volunteers would be better prepared to overcome the challenges that would confront them, physically, psychologically and emotionally, in the far-flung corners of the world. Idealism's survival is under constant numbing pressure in any government institution, especially at the federal level, where it slowly decays on the vines of politics and bureaucracy, and over the years the Peace Corps, America's most idealistic institution, has labored to preserve its shining reputation, though sometimes at the expense of the very principles it embodies.

Some readers of "American Taboo" will argue that the events surrounding the murder of Deborah Gardner that Weiss so compellingly reconstructs happened under the auspices of a Peace Corps long past, perpetrated by a relatively small group of people who never genuinely embraced or practiced the values of the Corps, or did in fact embrace but selfishly corrupted. The bigger concern, in my opinion, is who controls the story of the Peace Corps, who controls the story of Deb Gardner, and to what purpose. The Peace Corps, always, was really about us, what sort of people we Americans would be, who we were not just at home but in the world. "American Taboo" makes the answer much less clear and reopens the conversation at a critical point in our history. Not since Vietnam is the country more in need of self-reflection and self-assessment than it is now. For that reason alone, I hope "American Taboo" finds a wide audience.

But there's even a better reason. "American Taboo" is a spectacular debut by a writer who must be applauded for his clarity and fairness, the lean elegance of his narrative untainted by cynicism or the indiscretion of agendas. Unlike the individuals in the South Pacific and Washington who brought shame and dishonor to the noble service of almost a quarter of a million Peace Corps volunteers and staff for more than 40 years, Philip Weiss is a great American, a true patriot who lives and breathes and writes in the sunlight of a moral universe. That no one could protect Deborah Gardner when she was alive is perhaps understandable; that no one, for the sake of human dignity and decency, protected her when she was dead is forever inexcusable.

Now Weiss, the only real guardian angel in the life that was Deb Gardner's, rides in this storm, and his words have summoned a justice long denied.

Bob Shacochis' most recent book, "The Immaculate Invasion," is a chronicle of the U.S. military intervention in Haiti.