"A Home at the End of the World"

A love triangle with Colin Farrell and Robin Wright Penn in two of its corners sure sounds intriguing, so where did this film go wrong? 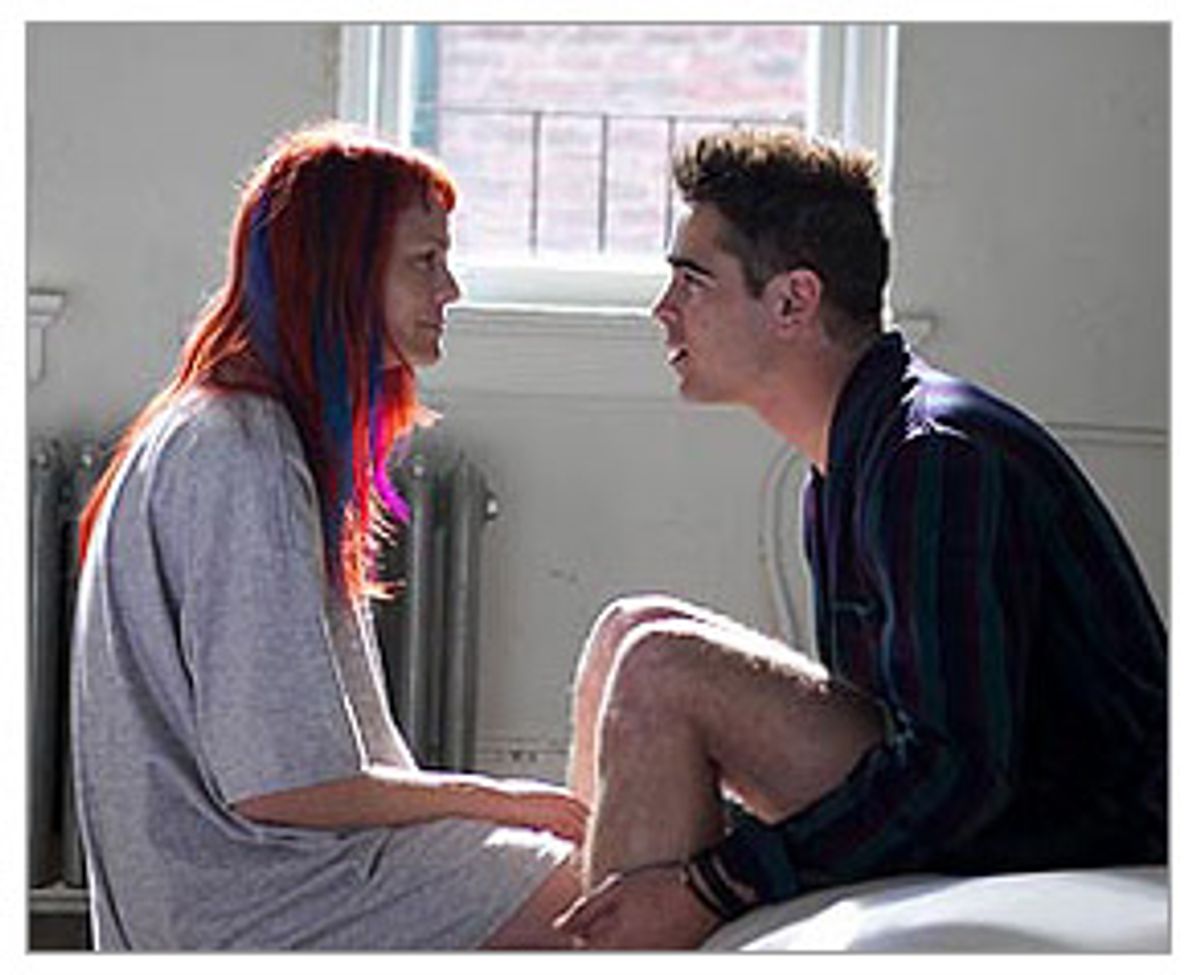 One of the central ideas behind "A Home at the End of the World," which writer Michael Cunningham adapted from his novel of the same name, is that we're not just born into families -- we can fall into them, too, in any number of unlikely formations and permutations. That's a valid and sturdy idea. But "A Home at the End of the World" is one of those works that uses characters to explore an idea -- like puppets being moved around a vast, nebulous game board -- instead of merely allowing the theme to surface, almost imperceptibly, as a result of our involvement with the characters.

In "A Home at the End of the World," we never fully know what those characters are thinking or feeling. Every time we think we're getting closer to understanding them, director Michael Mayer (this is his debut) shifts our attention elsewhere, leaving us clutching a headless, scentless bouquet of nuances. At the movie's end, nuance is all we have left; beyond the admirable efforts of some of the actors, the picture leaves behind nothing so human as a fingerprint.

"A Home at the End of the World" stars Colin Farrell as Bobby, a sweet, open-hearted but spacey and somewhat directionless young man who nonetheless has a way of working soothing magic on every human being he encounters. The picture opens in Cleveland in 1967; we meet young Bobby (he's played by Andrew Chalmers, who really does look like a 9-year-old version of Farrell), who's devoted to his free-spirited, laid-back, chemically enlightened teenage brother, Carlton (Ryan Donowho).

Carlton is the kind of guy who's refreshingly unembarrassed when young Bobby walks in on him as he's having sex with his girlfriend ("It's just love," he states simply). He gives Bobby a mini tab of acid -- "Windowpane, for clarity" -- and then proceeds to introduce him to the peaceful beauty of a graveyard near their suburban home. These early scenes are the most effective ones in the movie, not because they seem like accurate representations of the '60s, but because they so vividly capture a child's recollection of the era -- a world in which puzzling but enticing free love and chiffon dresses with big swirls on them mix interchangeably, as if each could be an acceptable stand-in for the other.

But by the time Bobby (at this point played by Erik Smith) reaches high school, tragedy has fractured his family. He seeks out the companionship of a boy at his school, Jonathan (the 15-year-old version is played by Harris Allan; the adult by Dallas Roberts), an awkward but sensitive kid who's both intrigued by and attracted to this wise, fragile yet self-possessed elf-child. (Admittedly, Bobby's seemingly endless supply of marijuana may be part of the draw at first.) Jonathan's mother, Alice (Sissy Spacek), a housewife whose life has its share of empty corners, falls under Bobby's spell too: She feels both protective of him and comforted by his preternatural calmness.

As teenagers, Jonathan and Bobby begin a boyish romance: Bobby is completely comfortable with it, but Jonathan is frightened and confused. The years pass, and the kids grow up and grow apart: It's now the early '80s. Jonathan has moved to New York, while Bobby stays in Cleveland, working in a bakery. But Bobby still feels a kinship with his old friend, and his loneliness for him causes him to trek to New York, where the now openly gay Jonathan is sharing a flat with a seemingly kooky but emotionally grounded hat designer named Clare (Robin Wright Penn).

Clare, Bobby and Jonathan form a love triangle with all the arrows pointing in various directions at once, and at one time or another each takes a turn being the odd man or woman out. The story might be described as "Boy meets boy; boy loses boy; boy reconnects with boy and then meets girl; boy loses boy while keeping girl; boy and girl reconnect with boy; boy and boy lose girl." And so forth. But an undercurrent of commitment and devotion always flows, circuitlike, through the three of them.

It's easy enough to grasp the point of "A Home at the End of the World," yet none of the one-on-one relationships ever quite jells: We're left to nod knowingly at the movie's sensitivity while never feeling a whole lot for any of the characters. When Bobby and Clare become romantically involved, Jonathan becomes envious -- but earlier, he'd made a point of distancing himself from Bobby. Human beings often do inexplicable things for unfathomable reasons, but a story can run aground pretty quickly if we run out of sympathy for a character too early on, and as Roberts plays him, Jonathan just seems sulky and childish.

Penn is, as always, a serene, stalwart presence, but the role of boho den mom doesn't serve her well. (Then again, who could be well served by such a role?) Farrell pours a great deal of earnest toil into his performance here, even when he's given the thankless, recurring task of casting sidelong lovesick glances at Jonathan. Farrell wasn't sought out for this role; he went after it, and there's no doubt he hoped it would allow him to prove his seriousness as an actor. Farrell is gifted, and there are moments here where he adds glimmers of subtlety to some very clunky, faux-perceptive material.

The problem, though, is that Smith, the actor who plays the adolescent Bobby, sets us up for a very different character from the one Farrell plays. Smith has a stunning scene with Spacek (who is, characteristically and predictably, warmly believable): She has caught him and Jonathan smoking a joint. Bobby, instead of being flummoxed, holds it out to her without giving it a second thought. Smith captures both the winsome vulnerability and the ingrained self-possession of the young Bobby; he makes us curious to see what kind of man Bobby will grow into.

But as Farrell plays him -- and as the story, for some inexplicable reason, demands -- Bobby becomes too much of a lost-boy grown-up: He's a deep-fried naif. Are we supposed to attribute this to the acid his brother gave him, or to his frequent marijuana use as a teenager? While it's perfectly understandable that Bobby would be a bit emotionally lost, it's not really clear why this intelligent, open-hearted kid would end up as a grown-up version of a special-needs child: Sometimes Bobby hangs around helplessly as the other grown-ups around him take charge, which just doesn't mesh with the mysterious man-child we met earlier, the one who so boldly, and with so much subterranean certainty, held out that joint to his best friend's mother.

The grown-up Bobby is much less interesting -- your typical "He's not different, he's special!" character. Similarly, the movie he's rattling around in is neither different nor special, as much as it tries to convince us otherwise. "A Home at the End of the World" strives to open our minds, instead of operating on the assumption that we've already got them open and waiting, with all their receptors turned on and willing. It's a by-the-book exercise in free thinking.