Ohio delegate and TV cult sensation Jerry Springer talks about Kerry's chances in the crucial Midwestern swing state, his own aspirations for office -- and what he would do with Bush on his show. 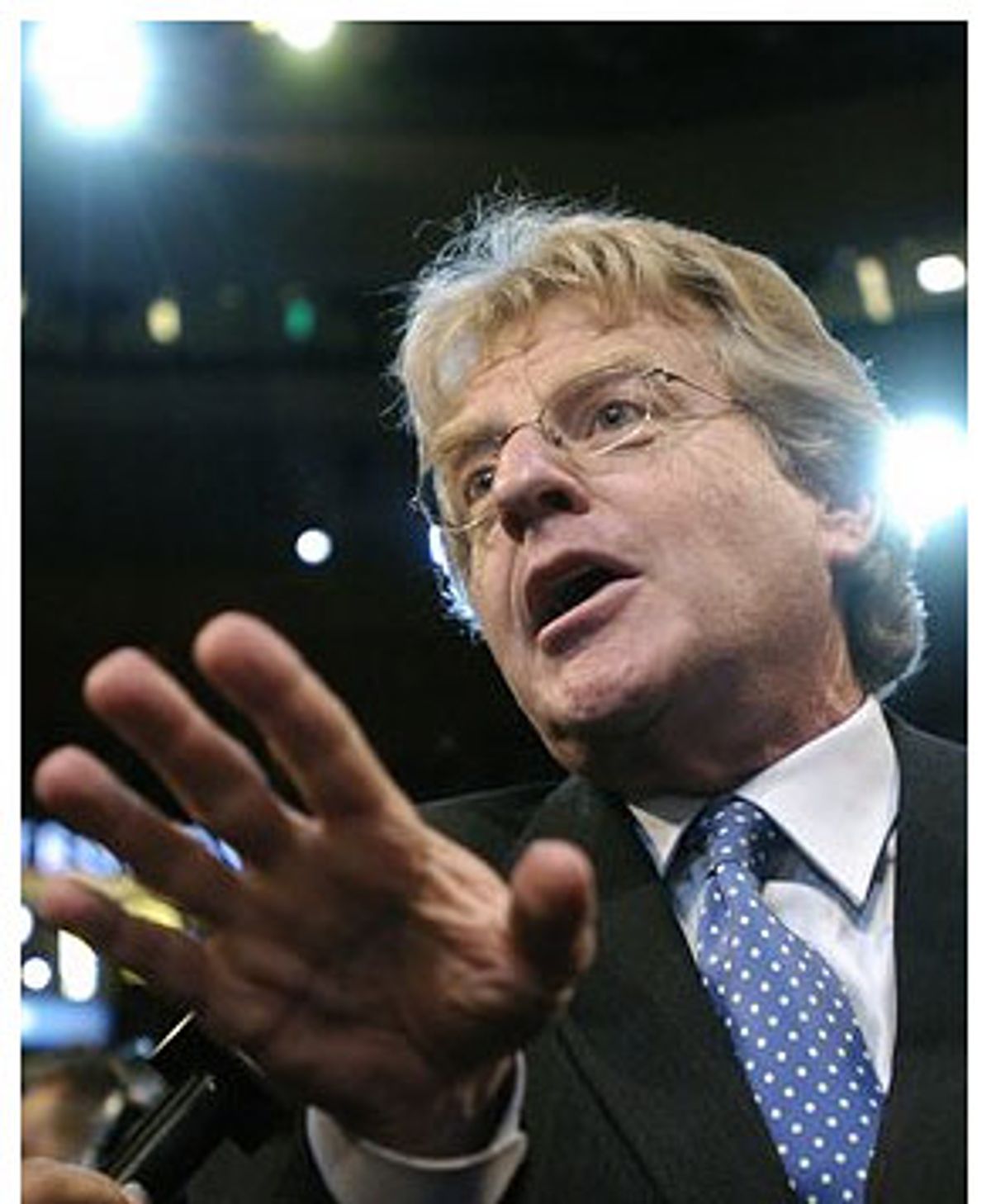 He's best known, of course, for standing by with a bemused grin while scantily clad teenage girls from the trailer park shout down their scantily clad mothers over stolen boyfriends, or while a cantankerous clan of little people lets mashed potatoes and fists fly over "My Nightmare Midget Thanksgiving." But that's Jerry Springer the (in)famous TV talk show host. Jerry Springer the Ohio delegate and aspiring politician seems to be an altogether different guy. When it comes to the war in Iraq, healthcare or a fragile U.S. economy, he's articulate, he's pensive and, well, he cares about people's issues.

He came to Boston for John Kerry's nomination this week with a sense of urgency. "The stakes are very, very high," Springer said in an interview. "This business you hear about how 'this is the most important election' -- well, yes, I think it's pretty damn important." In part, he says, that's because his home state's economy has crumpled under the Bush administration, suffering enough job losses to become the "poster child" for Bush's failed fiscal policy. He also believes that if reelected, President Bush could easily start another war and reinstate a military draft.

Springer in fact has a long history in politics. In spite of a failed bid for Congress in 1970, he has been to every Democratic National Convention since then, either as a delegate or as a Cincinnati news anchor in the 1980s. His early on-air persona was hardly the makings of a raunchy spring break host; his commentaries on topics from urban poverty to famine in Africa won him Emmy Awards. But an early political scandal may have better foretold his blockbuster show of today: He resigned from the Cincinnati City Council in 1974 after it was revealed that he had written a personal check for a prostitute's services. He was later elected mayor of the city in 1977, took a shot at being elected governor in 1982 but didn't make it past the primaries, and then turned to television.

With his renewed aspirations for office no secret -- it's widely believed he'll run for governor of Ohio in 2006 -- Springer no doubt also came to Boston this week to mingle with some key party players. He says he has no interest in holding national office or, for that matter, in having "a political career." So maybe it was just the Key lime pie that brought him to a private luncheon at Legal Sea Foods downtown in honor of Ohio Sen. John Glenn. Salon caught up with him there to talk about Kerry's chances, Springer's own political plans -- and what it might be like if President Bush were a guest on his long-running, salacious show.

By all accounts your state is a critical one in this election. What's the most important issue for Ohio, and what does Kerry have to do to win there?

Bush has devastated us in terms of our economy. We are the poster child for the damage that his administration's policies have inflicted on this country. We are the state where all the jobs have gone away. But what Kerry has to do to win Ohio is pretty much the same as what he has to do to win across the whole country: He has to let the people know that they can trust him.

I think it is clear -- and particularly in Ohio -- that people are not happy with the direction of our country. Every poll shows that most Americans think we're going in the wrong direction. And yet, those same polls show Kerry and Bush in a dead heat. I think what that means is people have already made up their mind about Bush and are not particularly crazy about him, but they're not yet ready to shift over to Kerry because they don't know him. It's a pretty big responsibility to trust your country to somebody you don't really know.

That's why Thursday night is so important. Americans have to feel like they can trust Kerry. And you know what -- and this is what I think a lot of the pundits are missing -- he doesn't have to be funny, and he doesn't have to be cool. This bit about him being stiff ... You love your father, and he isn't necessarily cool, right? Maybe sometimes he's awkward, tells corny jokes, whatever, but you love your father because you know that in a pinch he's going to be there for you, and that you can trust him and his judgment.

So people have to hear Kerry on Thursday night and be able to say, "He's obviously bright and his priorities are well stated; he's not a crazy man, and he's not gunning to be Texas macho." If he sells that feeling, that instinct, then I think we'll see a real shift [in popular sentiment], and it's not going to be just a blip on the screen around the convention. There is nothing George W. Bush can do between now and Election Day that's going to change anyone's feeling about him. They either love him or hate him. Now it's all up to Kerry.

Here in DNC country this next question is a bit taboo, so I thought you'd be good for it.

If the polls are believable, the race continues to be really close -- so what happens if Bush wins? What do the next four years look like?

Well, you pray for the best. But admittedly, it's a pretty scary prospect. The notion that this group in the White House could run this country for another four years -- and do it without having to worry about reelection? There'd be no leash anymore at all. Good lord, to think about what might happen in terms of our rights, what other countries we might go to war with. I don't care what anybody says: If we pick another country to go to war with, we are going to have the draft again. Otherwise the people we're sending over there are going to be slaughtered. It's not like the administration would have a choice. We don't have the manpower to start another war without thousands more human beings to send over there.

It's unthinkable what could happen if Bush is reelected. But you don't want to try to beat him using scare tactics. You know, he's not a bad human being. He just hasn't done the right thing. He has been wrong, and he's in over his head.

The stakes are very, very high. This business you hear about how "this is the most important election" -- well, yes, I think it's pretty damn important.

Your own political aspirations are no secret. But if you run for office again, how are you going to keep your show from becoming a liability?

Well, the quick answer is, if I run there won't be a show anymore. I'd stop the show a year and a half before the election.

But people are still going to hold it up and say, "Why the hell should a guy like this hold office?"

Absolutely, but it's not on the air every day. Every single day for a year and a half they'll see me on television talking about issues that affect their lives. I'll be talking about how we'll make their jobs more secure, how we'll have healthcare for everybody. In the end, people are going to vote the interests of their own families. They won't be voting to give me an Emmy.

But what about the issue of family values? Ohio is a socially conservative state. What's to stop people from looking at your show and saying, "Look, this guy's got no values"?

Well, I'm not a guest on the show, I'm the host of it. It's like saying to a newsman, "You covered the war, so you must be a war hawk."

I know you've acknowledged the silliness of the show -- its place on the entertainment spectrum. But in all fairness, you can't separate yourself from the circus. You're the ringmaster who is having the people on.

Well, here are the values I offer: Every American ought to have the best healthcare that we can deliver, regardless of income. Every American ought to have a job so that they can take care of their families. A top priority should be education, so that [people in] the middle class [have] the opportunity to fulfill their dreams. I'll stack those values up against anything -- that's why we elect someone to office. I'm not trying to be your preacher, your rabbi, your minister. If I run, it's to fix the state so people can protect and provide for their families, and offer their kids a better life than they had.

Do you see national office in your future?

I have no interest in a political career. If I run it's because I have an idea of what we can do in Ohio to fix the state; that's my only interest. Life is a lot more pleasant without being in the middle of all this [at the convention]. I really think that if this is something I have a talent or ability to do, I ought to do it before I die. I'll do it, I'll go away, but the state will be fixed -- that's my goal.

If you had Bush on your TV show, what would the theme be?

[Smiles, thinking it over.]

Would there be midget prostitutes on the stage?