The real mystery at the heart of M. Night Shyamalan's latest: How does he persuade actors like Sigourney Weaver and Adrien Brody to act in his supremely lame movies? 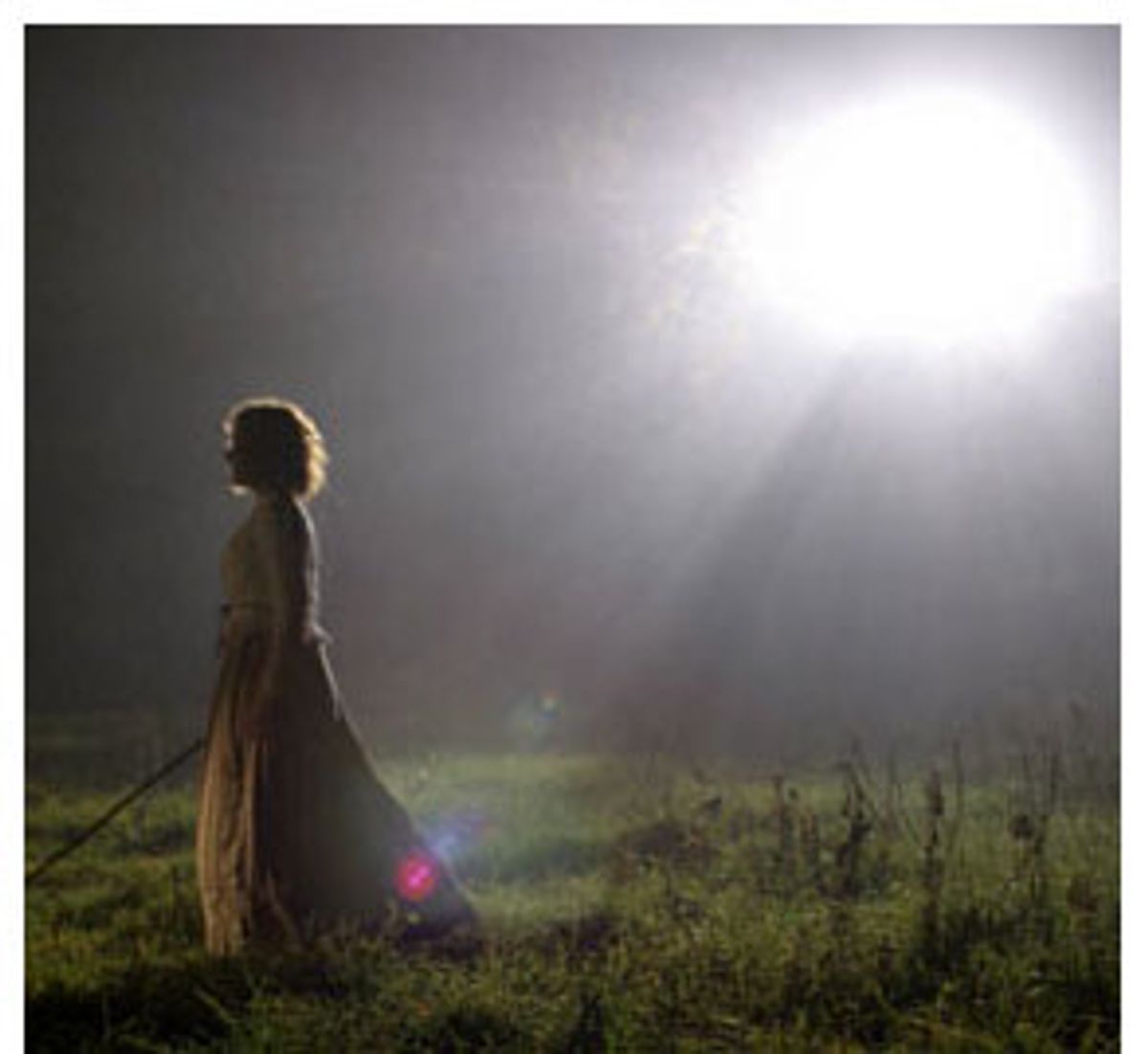 If you long to hear dialogue like "You needn't be scared. We have the magic rocks. They will keep us safe," then M. Night Shyamalan's nubby woolen sock of a thriller "The Village" is the movie for you. "The Village" takes place in, you guessed it, a village, somewhere in America, sometime in the late 19th century. We know this because we see little children in knee breeches tromping off to their little schoolhouse, and women scurrying here and there in handknit shawls, sweepin' porches and totin' wood. The people of the village rely on the wisdom of the town elders, a group led by the wisest old coot of them all, William Hurt, who also teaches at the village school.

But very early on, we learn that this is no ordinary village. It's bordered by a forest, from which deep, echoey moans regularly emerge: The people of the village have struck a deal with the fearsome creatures who live in this forest, who go by the nifty moniker "Those We Don't Speak Of" -- a nickname that's meaningless because the villagers speak of them pretty much all the time. Then again, what else is there for them to do but knit and poke at the fire?

The deal between the villagers and TWDSO goes something like this: We don't go into their forest, they don't come into our valley -- the same kind of handy segregation you can still find in many modern American cities. Additionally, there are certain rituals that help keep TWDSO out of the village. ("The ceremony of meats!" one young villager exclaims at a crucial moment.) And everyone knows not to wear red, which attracts TWDSO like gangbusters. ("The bad color!" the villagers whisper whenever a red flower or berry finds its way into their drab, Amishy environment.)

But rituals and avoidance of bad colors notwithstanding, horrors descend upon the village. Lambs and sheep are found dead and skinned, though not eaten. (Helpfully, one character attributes these weird killings to a mentally ill coyote.) And, most frightening of all, one TWDSO sweeps through the village one night, rattling doorknobs and making a horrible ruckus, as well as leaving scary red paint marks on the villagers' doors. We get just a brief glimpse of him: A hunched-over creature with hooked features and a hooded red cloak. Yes, you've guessed it: The TWDSOs are a roving pack of old-fashioned Santas. Admit it: You'd be terrified, too.

OK, the village (and "The Village") contain many more dark secrets than I've revealed here, and to find out what they are, you'll just have to go see for yourself. Director, writer and producer M. Night Shyamalan has, bafflingly, earned a reputation as a maker of supernatural thrillers for thinking folks, although he rarely seems to be thinking himself. (I do wonder why Shyamalan has any reputation left at all, after giving us that cheapy alien in "Signs" -- a tall guy skulking around Mel Gibson's TV room in stretchy pajamas.) But "The Village" is an allegory draped in seriousness -- telling you the point would give away the ending, which the people at Disney made me swear I wouldn't do, threatening to send a pack of Santas after me if I squealed. So mum's the word, but I will tell you that Shyamalan, far from being a master of suspense, hasn't yet figured out that the shadowy things you glimpse out of the corner of your eye are always scarier than those you're allowed to gaze upon directly.

Yet for some weird reason, Shyamalan is able to attract some very good actors for his eminently dumb projects: Here we get Sigourney Weaver, looking frazzled and stern and wearing a little lace neckscarf; Adrien Brody babbling and drooling as the village idiot (every village has to have one); Joaquin Phoenix as the strong, silent lad who fears no Santa; Cherry Jones rustling about purposefully as one of the village ladies; and Brendan Gleeson, who has little to do except weep over his dead 7-year-old son's coffin. (It's the deepest, most devastating moment in the movie, thanks to Gleeson, who is always extraordinary; unfortunately, it happens in the movie's first five minutes.)

"The Village" also features a brave blind girl, played by the pretty but awkward newcomer Bryce Dallas Howard. It was shot by the fine cinematographer Roger Deakins (known for his work with the Coen brothers; he was also the director of photography on Martin Scorsese's marvelous "Kundun"). But the movie's look is strangely overly polished -- the picture has an Old Sturbridge Village vibe to it, like a tourist attraction in which college kids dressed in aprons and buckled shoes are paid minimum wage to churn butter and throw feed to chickens. That's not to say "The Village" looks cheap -- it must have cost plenty of dough, particularly considering Shyamalan's inexplicable prestige. And there's no doubt about it: His movies make money. Shyamalan has got the magic rocks all right. Too bad they're all in his head.