The extreme perimeter around the symbols of power in the nation's capital demonstrates the impossibility of barricading and random-searching our way to national security. 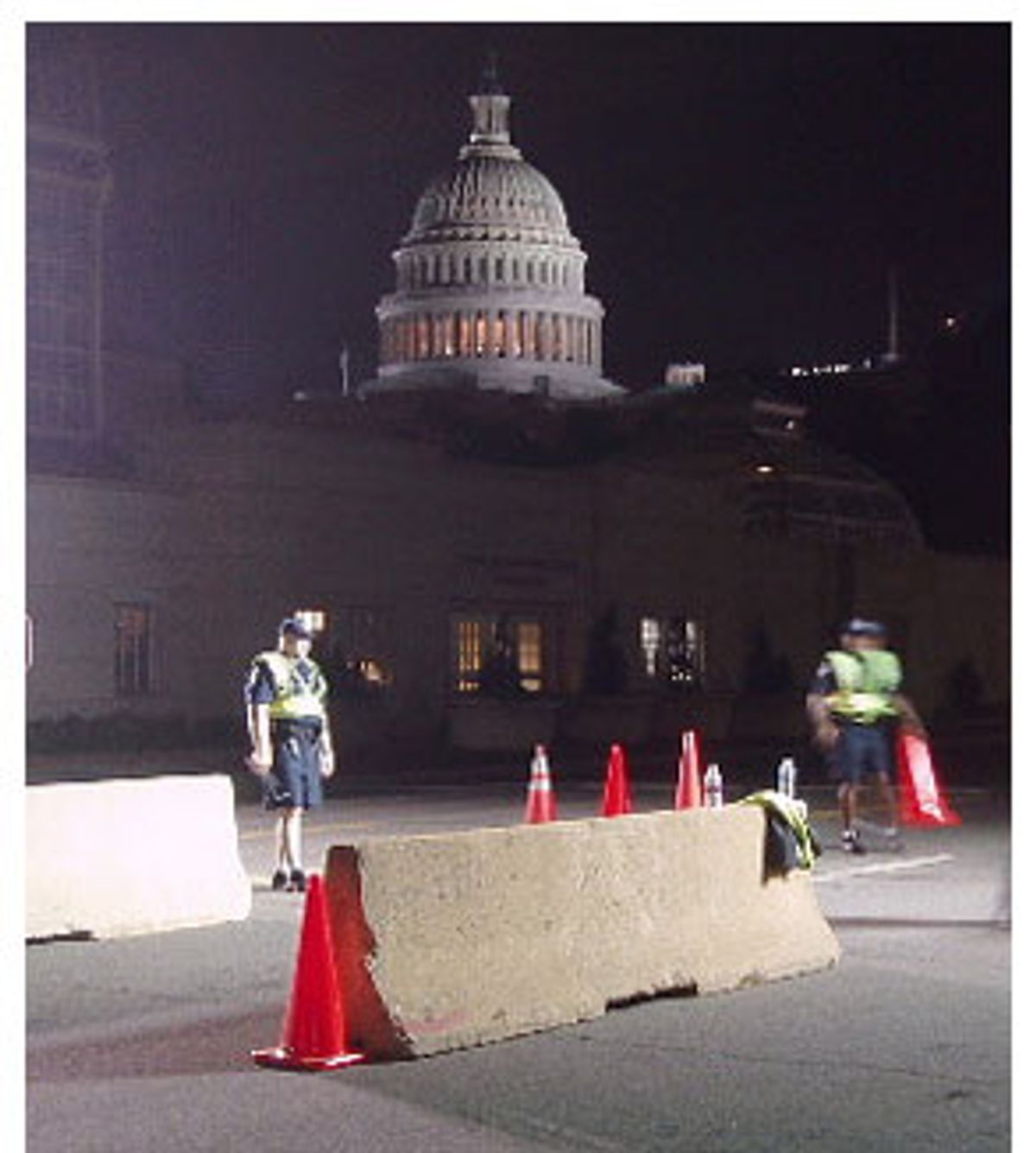 Homeland Security Secretary Tom Ridge rang the terror bell on Aug. 1, and 24 hours later, the federal police raised a high-security perimeter around the U.S. Capitol complex and the Supreme Court, at least a mile in circumference, with 14 vehicle checkpoints, including one at the corner where I live.

Washington is getting a taste of life in a police state. My neighbors are used to security. We live in the "bubble" around the federal buildings on Capitol Hill. We always get extra attention from the U.S. Capitol Police, the Supreme Court Police, the Park Police, John Ashcroft's security detail (he lives around the corner) and D.C.'s city police, so we don't worry too much about petty crime on my block. But terrorism? We can't help thinking of it now.

Since Ridge raised the national threat alert level, we're living in a lockdown here: cement "Jersey" barricades with guards, some toting automatic rifles; ubiquitous surveillance, seen and unseen; and random searches, K-9 sniffs and I.D. checks. And thanks to banks of new floodlights, the sun no longer sets on Capitol Hill.

The checkpoints went up in the middle of the night, just in time for Tuesday's morning rush hour. Many drivers found themselves subject to questioning, searches and I.D. checks. Traffic overflowed onto all the neighborhood streets, as it does every rush hour now. On Thursday, police added checkpoints to streets surrounding the Federal Reserve; the World Bank and the International Monetary Fund are under the same high security. Irate D.C. city officials "have assailed what they call an opportunistic encroachment on city streets by security officials taking advantage of terrorism threats," the Washington Post reported.

It's an unpleasant thing to do, but just for a second, think like a terrorist. You want to hurt the United States, give Uncle Sam a black eye ... again. Maybe you take a few people out in the process, but sending a message is your primary mission: You're not safe, Americans, not at home or abroad.

So, where would any self-respecting terrorist strike next? In New York and Washington, at the symbolic hubs of our economic, military and political power? Been there, done that. Besides, if post-9/11 security in both cities wasn't high enough, it is now. But is it high enough to deter the bad guys or catch them in the dragnet? Late Tuesday night, I decided to ride my bicycle around the new perimeter and check it out.

The guards were attentive as I rode along, through and around their barriers. They clearly sized me up as I passed and properly gauged me as no threat, although I was acting suspiciously, sometimes circling back to have a second look. Perhaps they judged that a bike without a lot of bags on it couldn't carry much trouble. Or maybe stopping bikes just wasn't in their orders. No one stopped me -- until I started taking pictures.

Within moments, a squad car came at me, lights blazing. Two more followed. A firm but polite Capitol Police officer requested identification and asked why I was taking pictures. I told him that as a writer and a neighbor, I wanted to document the event. He called my name and address into his dispatcher. Once the all-clear came back ("There's no record on your individual," the radio crackled), he told me why pictures weren't allowed -- I could be a terrorist gathering intelligence. I told him there were no hard feelings; he was doing his job and I was doing mine.

Before he took off, I ventured a guess: "Man, you guys must be flat-out with mandatory overtime." He rolled his eyes and nodded. "Yeah, it's really hard on the families," he said.

At a checkpoint near the U.S. Botanical Garden, at the foot of Capitol Hill, one officer yelled, "No pictures! Hey, no pictures!" But I managed to persuade the sergeant in charge to allow a few. Only after leaving the floodlights' glare did I notice that in the shadow beyond, a black-clad officer with an automatic rifle had watched me the whole time.

Near the Senate offices I found three tractor-trailers and a loader putting up a new row of cement barriers. I chatted with the drivers, two of them father and son. They were working through the night hauling nine barriers per load from Virginia. "There are 27 loads coming tonight," a driver said. "Tomorrow night they're supposed to be bringing in 65 more loads." That's a total of 828 new barriers, each about 10 feet long -- almost two miles' worth.

"Do you think this makes us more secure?" I asked. One of the drivers, the son, just shrugged. The father said, "I don't know what this gets us."

On Wednesday, I discovered how random and porous the checkpoints can be, despite the best efforts of police. A wholesome, Midwestern-looking young woman was waved through one of them without even having to roll down her window. The Middle Eastern-looking taxi driver behind her got a thorough questioning. So much for heeding Ashcroft's warning that al-Qaida might be using "European-looking" operatives.

It's not perfect, but the heightened security is a formidable deterrent. I have great respect for the Capitol Hill police -- I've always found them calm and professional -- and I think they and all the security forces in Washington are doing as well as they can, stretched as they are.

Still, if I were a bad guy, I'd forget D.C. or New York. Instead, I'd join the weekly Saturday-morning pilgrimage to Wal-Mart. Nothing like several bombings at malls across the country to stall the economy and make us all feel more vulnerable. It would be so easy.

And if such a thing were to happen, would the police-state tactics we're living with here be expanded nationwide? If not, how could we be truly safe? If so, would our liberty survive?

Under the circumstances, perhaps we can understand the extreme security, even tolerate it for a time. But paradoxically, it hasn't made me feel safer. Instead, it's a constant reminder of our vulnerability and of the impossibility of barricading and random-searching our way to national security.

John Moyers was founding editor of TomPaine.com and is now a senior fellow at the Center for American Progress in Washington.